The US Military is in the market for regular electric vehicles both as air base Ground Support Equipment GSE that tows aircraft and fetches and carries to them and for general runabouts at military bases. Indeed, pure electric forklifts, stackers and motorised cranes have long been used by the military forces of the world as well as pure electric bikes.
Charging infrastructure is, of course, essential for pure electric vehicles but it is not a problem for local use as in a military base or airfield. Attention is now turning to portable power on or with the vehicles. Sunpods has deployed photovoltaics, for instance.
SunPods is a San Jose, California, company that has developed a portable charging station that is powered by solar energy. SunPods recently demonstrated its SP-300 Plug 'N Go Solar Charging station at Fort Bliss in Texas. The U.S. Army is investigating various options that would give the military flexibility far afield with off-road electric vehicles, hybrids and utility vehicles.
The US Army, Air Force and Navy plan to get thousands of low-speed electric vehicles for on-base transport in an effort to be environmentally friendly. The US Army spends, on average, $1,200 every year to run fueled vehicles as opposed to $460 per year to run an electric vehicle. There are also environmental benefits by utilizing the NEVs. For example, they do not produce exhaust or emissions.
U.S. Department of Energy's Energy Efficiency and Renewable Energy Alternative Fuels and Advanced Vehicles Data Center notes that, "the average passenger vehicle produces 473 grams, or more than a pound of greenhouse gases per mile. These greenhouse gases include carbon dioxide, methane, nitrous oxide, hydrofluorocarbons, perfluorocarbons, and sulfur hexafluoride."
"The Air Force was looking at low-speed vehicles, which are actually still gasoline vehicles," Deputy Assistant Army Secretary for Energy and Partnerships Paul Bollinger told Army Times. "We've skipped that and we are going straight to electric. We are eliminating the fuel issue, period."
Bollinger said about 4,000 of the vehicles, similar to the small trucks often seen on college campuses, would be deployed over the next three years. Top speed would be 30 mph, the limit on Army bases. The Columbia ParCar Mega, made in the USA, is one heavy-duty, low-speed electric vehicle the Army is considering for this general on-base usage.
Columbia ParCar Mega pure electric light truck 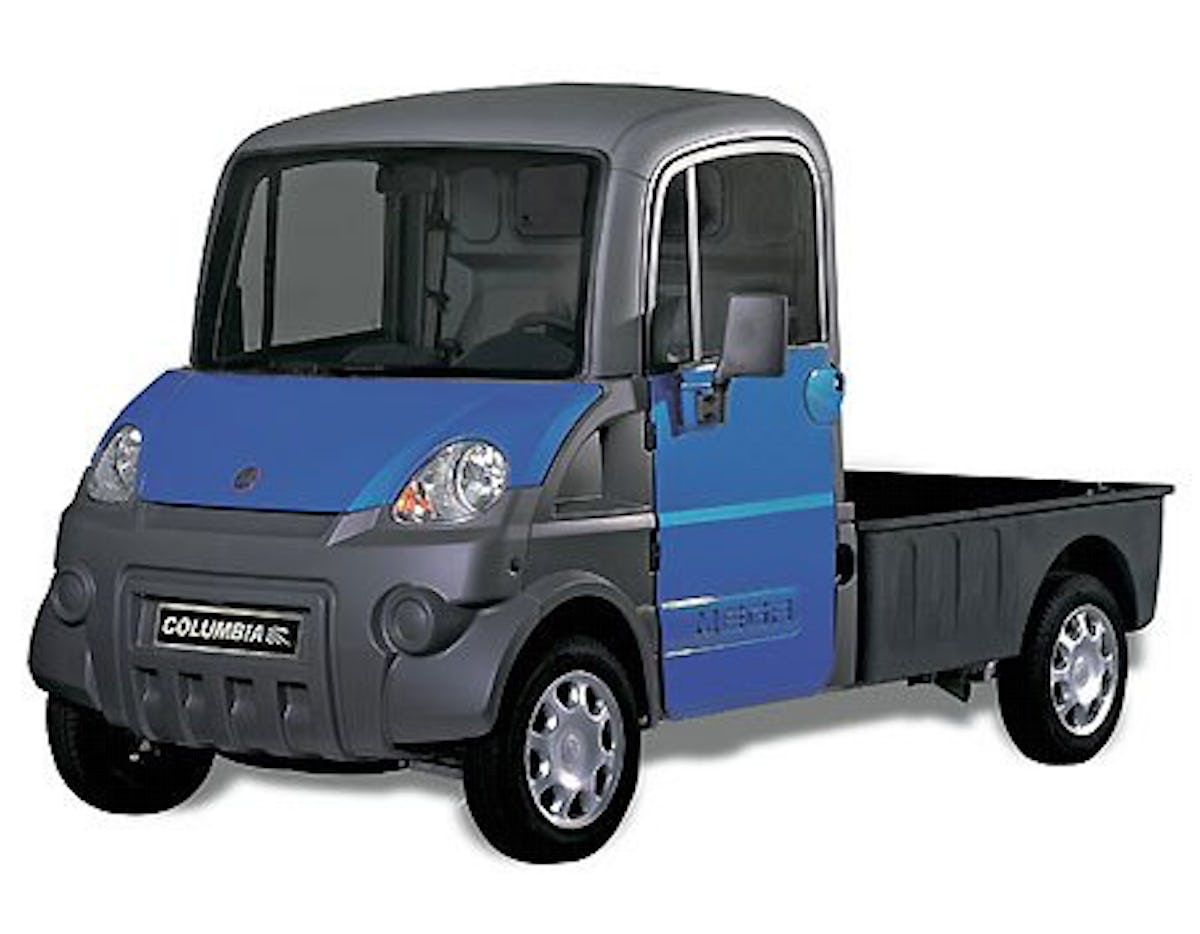 Source: Columbia ParCar
Each would use about $400 of electricity per year, he said, as opposed to $2,400 for gasoline in gasoline-powered equivalents, and all told the fleet would save about 11.5 million gallons of gasoline each year. The first batch of vehicles would be leased, Bollinger said, and then possibly bought later.
"We will not be paying any more for the NEV than for a standard gasoline-powered vehicle," he told Army Times.
Fort Sam Houston
In January 2010, Fort Sam Houston acquired 20 low-speed electric utility vehicles, as part of the DoD project to introduce 4,000 electric cars and trucks for commercial and worldwide use. Army researchers and engineers continue to assess electric drives, comparing them with gasoline and diesel fueled engines.
Director of Logistics, Clarence Anderson said, "The electric vehicles have been distributed throughout various units and directorates within the garrison. There are 20 additional NEVs on order that will be added to the fleet. The Directorate of Logistics will handle distribution to units across the post."
Neigborhood Vehicles NEVs being purchased by the US Military 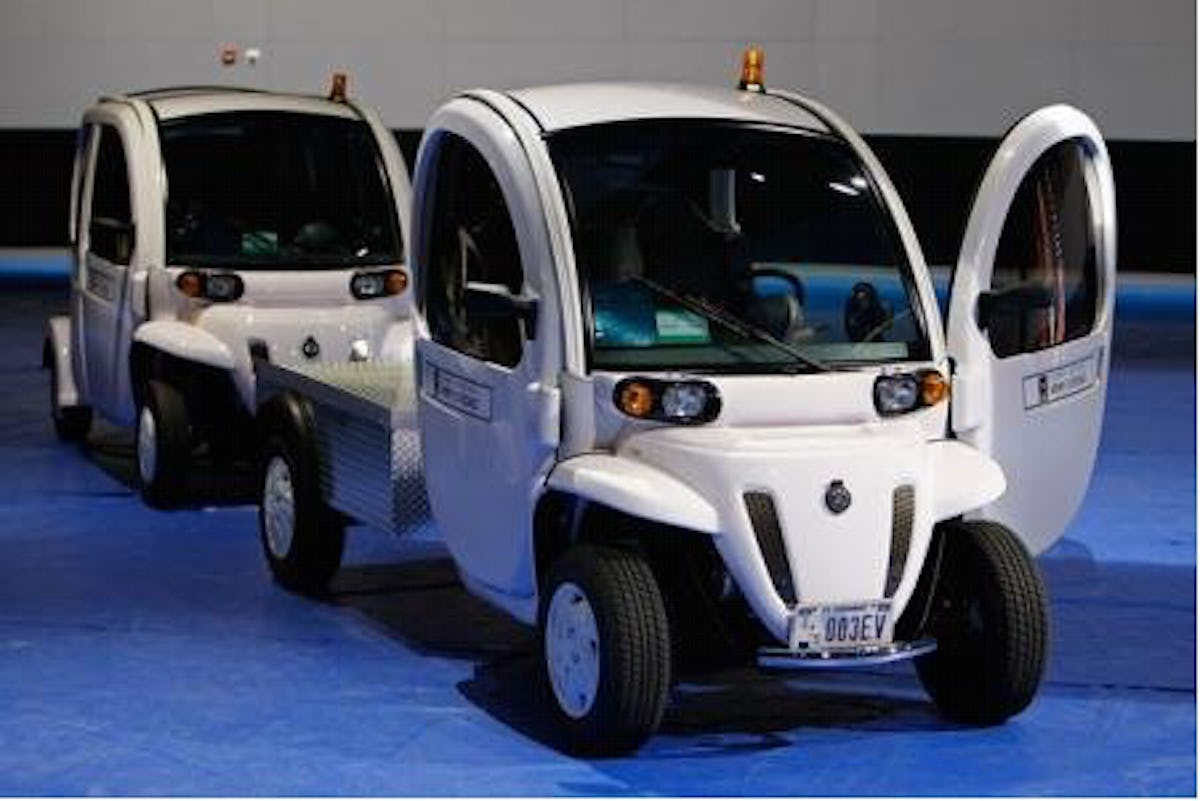 Source: GEM
The Army's objective is to replace up to 28,000 vehicles with electric vehicles that operate on a 40-volt battery. These NEVs only have a top speed of 25mph and range of up to 30 miles when charged but that is considered adequate.
ZAP
In mid 2010, at Fort Bliss, Texas, electric vehicle builder ZAP demonstrated its line of EVs, including an electric truck, a van, and an ATV, at the U.S. Army's Renewable Energy Rodeo and Symposium. The Symposium was sponsored by the Army's Research, Development and Engineering Command's Tank and Automotive Center.
The Fort Bliss event is held for government officials, fleet managers, Pentagon-level military personnel, and students from El Paso-area colleges and universities.
ZAP demonstrated its ZAPTRUCK XL (convertible bed), the ZAPVAN SHUTTLE (a small, 4-seat shuttle), and the ZAP DUDE ATV (an all-terrain 4-wheeled vehicle). The U.S. Army currently uses a small number of ZAP vehicles at its Daegu, Korea installation.
Specialist pure electric military vehicles are also being adopted and further developed. At one dramatic demonstration an audience was shown extremely noisy belching military HMMVs (Humvees) coming up to them and, when these vehicles stopped in front of them , the audience was asked to turn round and a fleet of pure electric HMMVs were just behind them, having arrived so silently than no one noticed.
Hawkes Ocean Technologies
Hawkes Ocean Technologies Inc and its sister company Hawkes Remotes Inc make highly sophisticated underwater vehicles for manned and unmanned missions respectively. They are pure electric as are Autonomous Underwater Vehicles AUVs and all of these designs have both military and civil uses.
Main image: SunPods portable solar charger for EVs
Source: Sunpods
For more attend: Future of Electric Vehicles which uniquely covers the whole electric vehicle market - land, sea, air whether hybrid or pure EV - with emphasis on future breakthroughs.
The new IDTechEx report "Electric Vehicles 2010-2020" has a chapter giving extensive coverage of military electric vehicles with ten year forecasts by number, unit value and market value. Electric Vehicles 2010-2020.