Electric Vehicles but not as we know them

Electric vehicles use electricity wholly or partly for traction - making them go along. That encompasses an increasingly large variety of modes of travel by land, sea and air. Add to that fresh water. Electric vehicle manufacturers and those supplying their components vary from ones that are so large, well funded and ambitious that they go for the biggest opportunity, which is hybrid cars for the next decade.
At the other extreme, small niche players with astute marketing are dominating niches. Sadly, in between, there are a lot of underfunded, delusional vehicle and parts manufacturers that go for the largest markets without much thought about how they could have more chance of success in niches, let alone create such niches. Yet those smaller market sectors often involve premium pricing, specialist technologies and components and power trains both much larger and much smaller than those for cars.
The truth is that an electric power train offers a huge number of benefits from quietness, reliability, manoeuvrability and acceleration to environmental credentials and, in the military, little or no gaseous, acoustic or heat signature for missiles to home in on. A hybrid vehicle can even act as a power supply for military or civil work carried out at destination.
Here are just a few of the increasing variety of applications of electric vehicle technology with the global leaders in numbers sold. For example, in numbers, pure electric golf cars still hugely outsell pure electric on road cars. 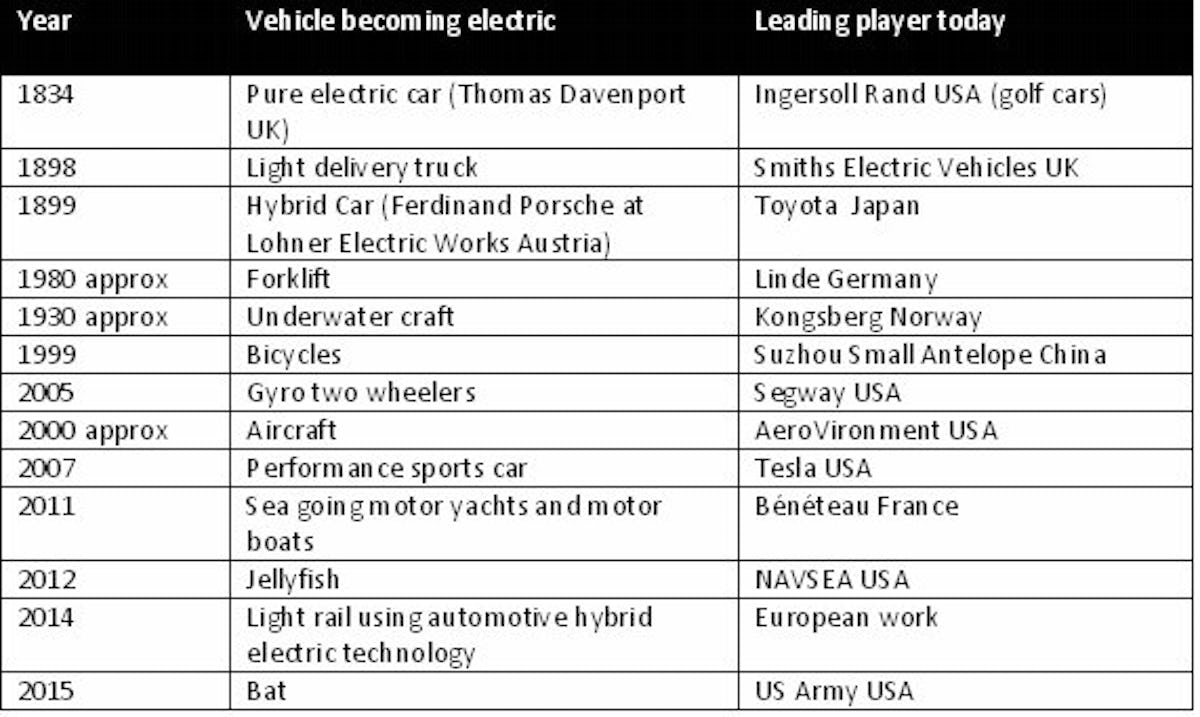 Source: IDTechEx
Micro hybrids are just off the radar. This is a tongue in cheek term for conventional vehicles that automatically switch off the engine when the vehicle comes to a halt and automatically switch it on when the accelerator is next pressed.
They tend to use larger batteries and/ or regenerative braking to manage this. Many vehicle manufacturers are caught wrong footed with no electric vehicles in their range, so calling stop start conventional vehicles "micro hybrids" buys them time while helping to meet tighter pollution laws such as those recently introduced in Europe.
Forecasting the future markets for real electric vehicles is tricky because so many new sectors are emerging. For example, over 37 million will be sold in 2015 but the variety will be formidable.
Choose carefully. Number of electric vehicles as percentage global market share in 2015 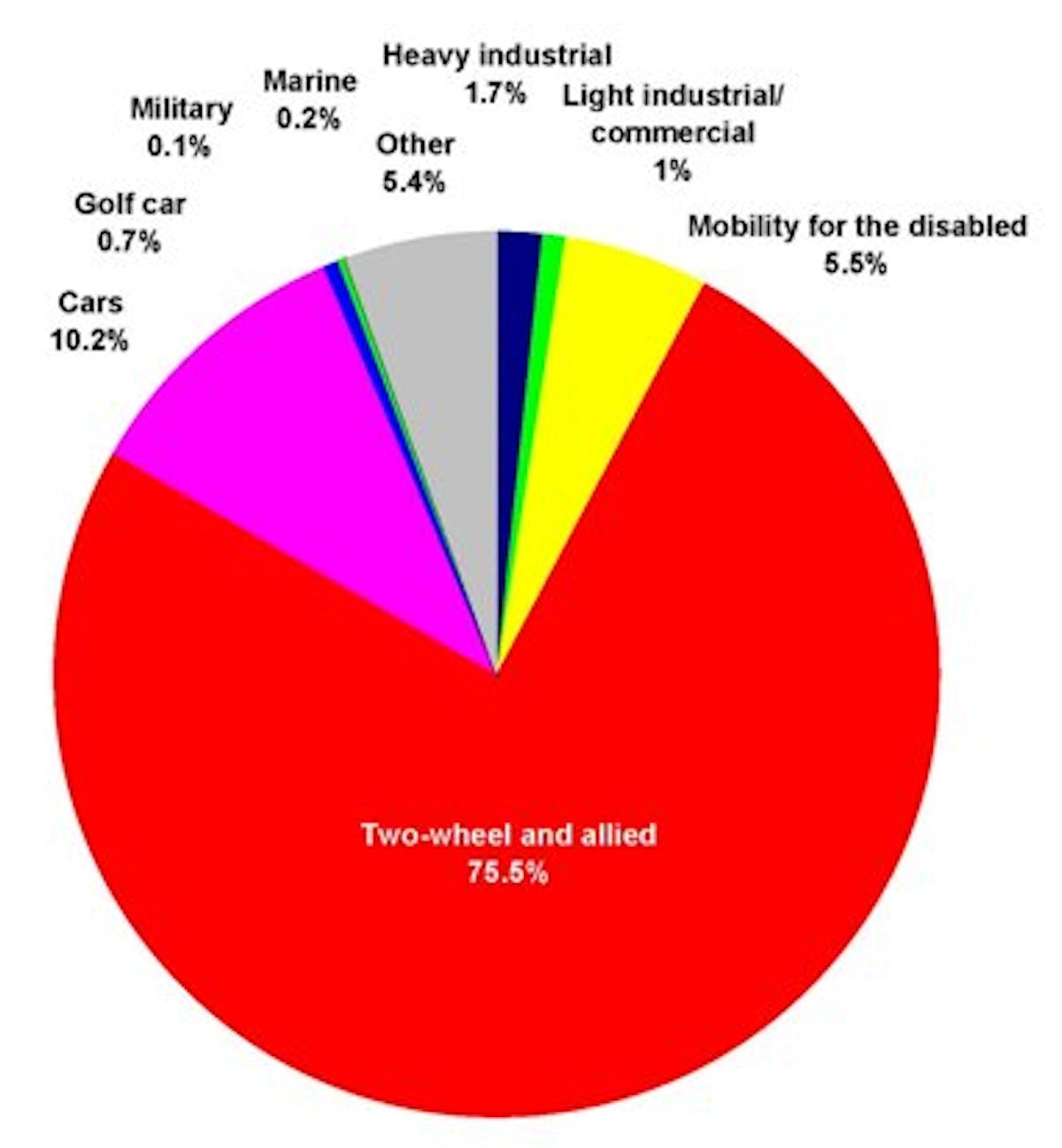 Source: IDTechEx
Let us look at some of the niches, many of which have hefty funding and can lead to billion dollar activities.
Military innovation
Military traction batteries need to be very reliable, even bullet proof, and, when they are in hybrids, sharply reduce fuel consumption to create operational flexibility. Second generation lithium batteries that are safer and have better performance are incorporated in the Lightning Car Company's Lightning sports car, the KleenSpeed Technologies 200mph Formula One pure electric car, the Hawkes Ocean Technologies Deepflight manned submarines and the Hawkes Remotes Inc unmanned undersea vehicles but even more powerful batteries will be welcome. submarines, the PC-Aero pure electric aircraft etc. but even more powerful batteries will be welcome.
For example, in 2010, Quantum Fuel Systems Technologies Worldwide, Inc., announced its Clandestine Electric Reconnaissance Vehicle (CERV), an all-wheel-drive diesel hybrid electric vehicle designed by Quantum and TARDEC's National Automotive Center (NAC) with funding support from the US Special Operations Command (USSOCOM). The unit can maintain speeds of 80 miles per hour and climb 60 percent grades - all while reducing fuel consumption by up to 25 percent compared with conventional vehicles of comparable size. QT has developed a land-based V22 hybrid reconnaissance surveillance and targeting vehicle "RSTV", a hybrid FMTV truck and a hybrid line hauler. The development budget granted by the US military for the projects was $43 million.
New marine markets
Battery driven surface craft help to meet pollution regulations from India to the USA. Indeed, on some inland lakes, the internal combustion engine is banned so even fast boats pulling water skiers are pure electric.
Out at sea, the Autonomous Underwater Vehicle AUV has considerable funding because its uses are widening rapidly. They already include sea condition monitoring, meteorology, oil rig maintenance, research, mine and submarine detection and countermeasures, search and rescue and mineral prospecting.
Some stay at sea for years, so their batteries, energy harvesting and control electronics have to be highly sophisticated. These are not toy traction batteries either. AUVs may look like torpedoes but their traction batteries are typically 60kWh in capacity and some being developed to take 300kWh batteries, much bigger than those in an electric car and pressure resistant. Hawkes Ocean technologies believes it is now realistic to draw up a plan to make a plane that dives like a gannet, navigating under and on water.
The market for existing types of AUV alone is worth $2.3bn over the next decade with 1,400 new AUVs built particularly for military, scientific and oil and gas sectors according to the IET. AUV traction battery packs can be 20% of the cost and some AUVs cost $5 million each. Read about the Gulf of Mexico and realise that many more AUV types are needed.
Yachts become electric vehicles
A particularly brilliant example of creation of a new market for traction batteries happened this year. In February, Valence Technology signed a deal worth up to $45 million to supply the largest yacht maker in the world, Bénéteau Group of France with traction batteries for a new concept of fully integrated hybrid yachts, sailboats and motor boats.
The global leisure boat market is at least $20 billion - some niche.
"This is a revolution, not an evolution, in marine propulsion, energy generation, storage and management," said Robert L. Kanode, President & CEO, Valence Technology. "Bénéteau is setting a new blue water standard for cleaner sailing yachts. Ports and harbors around the world will be cleaner, quieter and safer thanks to Valence Technology's safe, dynamic energy systems and the forward thinking of companies like Bénéteau Group, and ZF Marine, a pioneer in electric pod drives."
"The teams from the Bénéteau Group and Valence Technology have been working closely together for many months now, with the combination of their expertise paving the way for this major technological breakthrough," said Dieter Gust, Management Board Member, Bénéteau Group.
In a major departure from the way boats and yachts have been manufactured for decades, new hybrid-electric sea-going vessels yield low to zero-emissions, reduce fuel consumption and require less maintenance than traditional diesel marine propulsion systems.
Valence Technology dynamic energy storage systems can power both propulsion and auxiliary power systems without affecting the vessel's performance or functionality. One of the most innovative features of the new hybrid drive system is the capability to recharge the advanced battery packs without the use of noisy, polluting diesel generators.
Electric aircraft get serious
Electric aircraft are ceasing to be one offs. Many organisations are involved including PC-Aero in Germany,AeroVironment, Aurora Flight Sciences, Electric Aircraft Corporation, GE Aviation Systems, Yuneec International, Sonex Aircraft, Earthstar Aircraft, DARPA, ACV Electroservices, Electravia, NASA and a host of universities and research centers. There is even APAME in France, which translates as the Association for the Promotion of Electrical Engine Aircraft. This is getting to be quite an industry.
For more read the IDTechEx reports Electric Vehicles 2010-2020 and Car Traction Batteries - the New Gold Rush 2010-2020. See Electric Vehicle Research www.idtechex.com/evr for free daily analysis and attend
Future of Electric Vehicles.
Uniquely, this conference will cover all types of EV, with emphasis on the breakthroughs to come. That includes lessons learned from the world's fastest motorcycles which use batteries from A123 Systems, one of the newer traction battery companies, and from the development of the world's fastest electric car, a Formula 1 racer by Kleenspeed. It will achieve 200 mph but Kleenspeed uses it a a proving ground for leapfrogging the current technology of family cars. Kleenspeed is interested in much more than Formula One racing. The event has an exhibition and visits to local centers of excellence in electric vehicles including Kleenspeed. There are optional Masterclasses on all types of electric vehicle and on next generation components on the days before and after the two day conference.
Top Image: AUV developed by Central Mechanical Engineering Research Institute (CMERI) in India for search and rescue and military missions
Source: CMERI