Germany catching up in electric vehicles

Germany is the strongest trading nation in Europe with the broadest and deepest automotive activity. However, the strategy of the German government and its automotive industry has been deeply flawed. The futuristic automotive work has involved leaner diesel, internal combustion engines burning hydrogen, and practicable, affordable fuel cells for cars. Unfortunately, leaner running conventional cars are well into diminishing returns and distribution of hydrogen to road travellers across Europe for either internal combustion or use in fuel cells remains a pipe dream. So far, fuel cells only create unaffordable, hybrid-like cars involving large expensive batteries to manage starting and power surges. In the country where Ferdinand Porsche first demonstrated a hybrid car in 1899, Porsche has no such car in production beyond the Cayenne S hybrid SUV. Germans buy hybrids from Japan. Porsche only has a hybrid concept mainstream car. The global hybrid car business is dominated by Toyota, Honda and Ford and Ferdinand is probably turning in his grave.

Linde in Germany is formidable in pure electric forklifts and other heavy industrial vehicles. Indeed, as the leading industrial truck manufacturer in Europe, Linde has recently offered a fuel cell option. Enhanced by supercapacitors, they were developed over the last two years with long-term partner Hydrogenics, the Canadian fuel cell manufacturer. Linde is leader in industrial gases so it knows all about distributing the necessary hydrogen to industry. However, many other advances in heavy industrial electric vehicles come from outside Germany. That includes use of the new, safer lithium batteries in Japanese Nissan pure electric forklifts (although Linde first demonstrated lithium batteries in hybrid forklifts in 2008), flux vector motor control in US Balqon heavy trucks and diesel electric powertrains in US Caterpillar earthmovers.

No depth in the new technology

Although the battery can be up to 50% of the cost of an electric vehicle and the main determinant of its performance, in combination with supercapacitors, Germany has not been a leader in either component. The largest traction battery supplier globally is Panasonic of Japan. Supercapacitors, invented in Japan, are largely made in automotive form both there and in the USA. China makes the world's e-bikes, Americans make the electric golf cars and Taiwan makes the electric mobility vehicles for the world's disabled. It is not the Germans that make the leading premium priced electric vehicles either, whether military, in the air or under the sea.
Forecasts for some of these electric vehicles are shown below, extracted from the new IDTechEx report Electric Vehicles 2010-2020.
Numbers of EVs consisting of two wheelers, cars and mobility for the disabled compared in thousands, sold globally, 2010 to 2020, by applicational sector 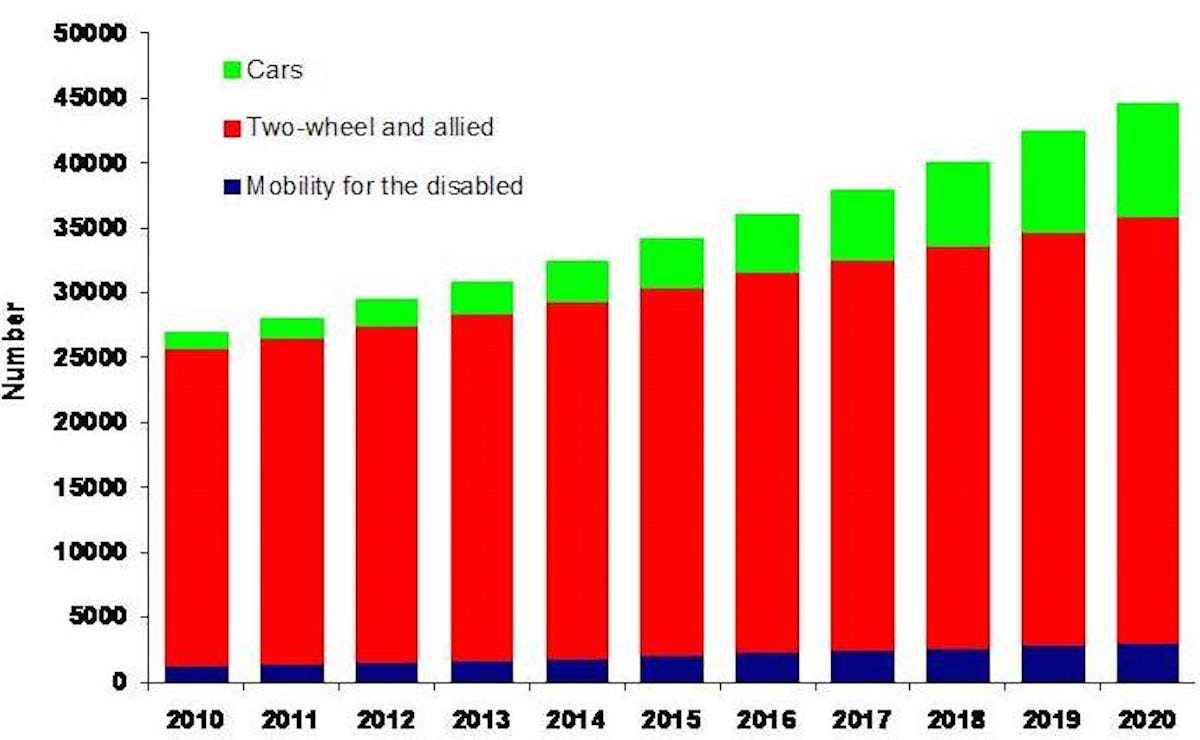 Source: IDTechEx "Electric Vehicles 2010-2020"
It was start up Tesla in the USA that made one million dollars profit last year from a pure electric designer sports car because it outperforms the traditional names in all but range and yet has environmental credentials. Equivalents in Europe are the Lighting and Frazer Nash sports cars in the UK, where Nissan will manufacture the Nissan Leaf car for Europe.

True, following others, the German company Festo has demonstrated "an artificial autonomous jellyfish with an electric drive and an intelligent, adaptive mechanical system." and electric manta rays but they are not being commercialised. The US NAVSEA Defense Center that has a serious program for robot jellyfish and Chonnam National University in Korea now has a shrinking one based on electroactive polymers. Kongsberg in Norway is global leader in electric Autonomous Underwater Vehicles.
Festo robot jellyfish are not mainstream 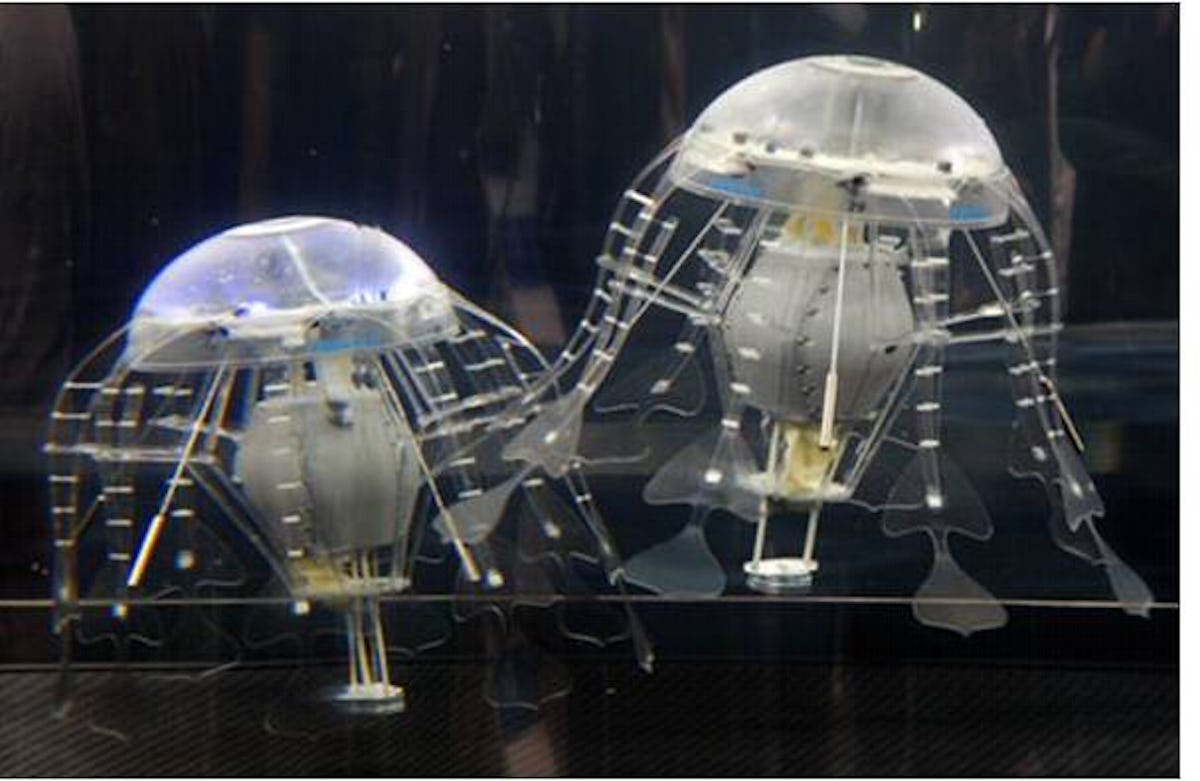 In 2008/9, in Germany, the global financial meltdown and oil problems made it clear that its automotive industry was on the line. Outside Germany, a tsunami wave of government benefits appeared for pure and hybrid electric vehicles and some East Asian companies started putting sums of up to one billion dollars on the table in order to reinforce leadership in these vehicles and their components. A global public and private financial commitment of about $60 billion to pure and hybrid EVs was a wakeup call. Germany needed to change course as a matter of extreme urgency.

At the eleventh hour, the leviathan that is German industry is turning in the right direction. In May 2010, the German government, manufacturers, suppliers, public agencies and others created the National Platform for Electric Mobility (NPEM). The meeting sought to enact the 2009 German Development Plan for Electro-mobility with its target of 1 million electric vehicles by 2020. They announced that battery EVs are more promising for Germany than fuel cell vehicles. Most of the €500m already identified to support the introduction of EVs goes to battery and infrastructure projects, linking academia, all major German car manufacturers, electricity supply and battery and components makers.
No less than 13 of the 56 Fraunhofer institutes are now tasked with developing electric vehicle technology. The German Technical Universities are expanding their interest. For example, in March 2010, it was announced that a group of companies is working with Renault to examine the feasibility of installing a large network of electric vehicles and networked charging stations between the Rhine and the Ruhr. 110 electric cars are being leased from Renault. The German government is providing €7 million for the project.
The Roding Roadster, a custom sports car, was unveiled in 2009: it may be in production in 2011. It was developed with scientific support from the Technical University of Munich (TUM), which is now designing a commercially viable mainstream electric car.
Industrial opposition to government support for purchase of electric vehicles has largely faded away but incentives equivalent to those in the UK, Denmark or the USA are still not in place, partly because German industry is not yet ready to supply mainstream electric vehicles.

Mercedes has launched a mild hybrid S Class. Parent Daimler Benz has bought nearly 10% of Tesla and set up a battery joint venture with Evonik Industries of Germany.
In 2008, the new 50:50 joint company SB LiMotive owned by Samsung of Korea and Robert Bosch of Germany announced its target of developing, manufacturing, and selling lithium-ion batteries for automotive applications and commitment to be long term partners in the business of electrified mobility. Located in Germany and Korea, it bought traction battery company Cobasys LLC in 2009. BMW is advertising its electric concept car while working on an electric Mini among other things. Volkswagen is preparing hybrids for the marketplace. Opel will get hybrid technology from parent General Motors. Will all this be enough to overtake BYD Auto of China, Nissan Renault, Honda, Ford and Toyota? Time will tell.

IDTechEx is staging a unique event Future of Electric Vehicles 2010 in San Jose California USA, on December 7-8 that will look at the breakthroughs to come in all forms of electric vehicle. The Americans behind the world's fastest pure electric cars and motorcycles will reveal the lessons learned about the leading edge technology. Radically new designs and materials will be covered including electric aircraft including the PC-Aero from Germany, AUVs and cars. Self-powered sensors and energy harvesting shock absorbers from the USA, mini gas turbine range extenders from the UK, new battery chemistry and invisible photovoltaic power generation from Japan will be among the many game changers analysed. There will be visits to local EV manufacturers, optional Masterclasses and an exhibition. For more see www.IDTechEx.com/evUSA.