Lithium polymer traction on and under the water

Using lead acid batteries, many electric boats have been plying waterways in Europe since 1890, when electric cars were also popular.
In the UK, the Mary Gordon electric boat, now restored and working again, was built in 1898 on the Thames of teak planking on oak frames, by Sergeants, boatbuilders of Eel Pie Island. At that time electric boats or launches were very popular on the Thames and The Mary Gordon was one of the largest, at 52 ft. (11 m.). She could carry 75 adults or 120 children in comfort. In 1905, the 93 feet long, wooden Victory was the largest electric boat on Thames. However, nowadays, we ask even more of our electric boats such as speed and long life and lithium batteries get us there. And even lithium traction batteries, for marine use, have moved on and we now have both pure electric and hybrid electric boats and electric outboard motors.
Beyond toys, few use simple lithium cobalt batteries for traction any more. They are too susceptible to thermal runaway due to misuse or manufacturing variations or inadequate design of battery management systems. Put another way, they need to be corsetted up so thoroughly with safety measures, including powerful water cooling, that such a battery pack is expensive and heavy and there are price hikes and toxicity of cobalt to worry about too.
The present and future therefore consists of "less cobalt" batteries where the cathode incorporates other metals and "no cobalt" batteries. Both have a place and their relative merits will not be rehearsed here. Suffice it to say that it is possible to make both types with so-called solid state electrolytes -" lithium polymer batteries" - where leakage is either impossible or near impossible and heavy metal casing is not needed.
Good compromise
Such traction batteries sacrifice some aspects of performance but are better in other respects. They are pressure resistant as required in deep sea vehicles and long lived and light weight as appreciated in pure electric aircraft, for example. With a rapidly increasing number of suppliers offering lithium polymer batteries (in our free White Paper we look into 20 of them) here are some of those applications.
Valence Technology - Bénéteau sea going yachts and motor boats
A brilliant example of creation of a new market for lithium polymer traction batteries happened this year. In February, Valence Technology signed a deal worth up to $45 million to supply the largest yacht maker in the world, Bénéteau Group of France with traction batteries for a new concept of fully integrated hybrid yachts, sailboats and motor boats. The global leisure boat market is at least $20 billion - some niche. 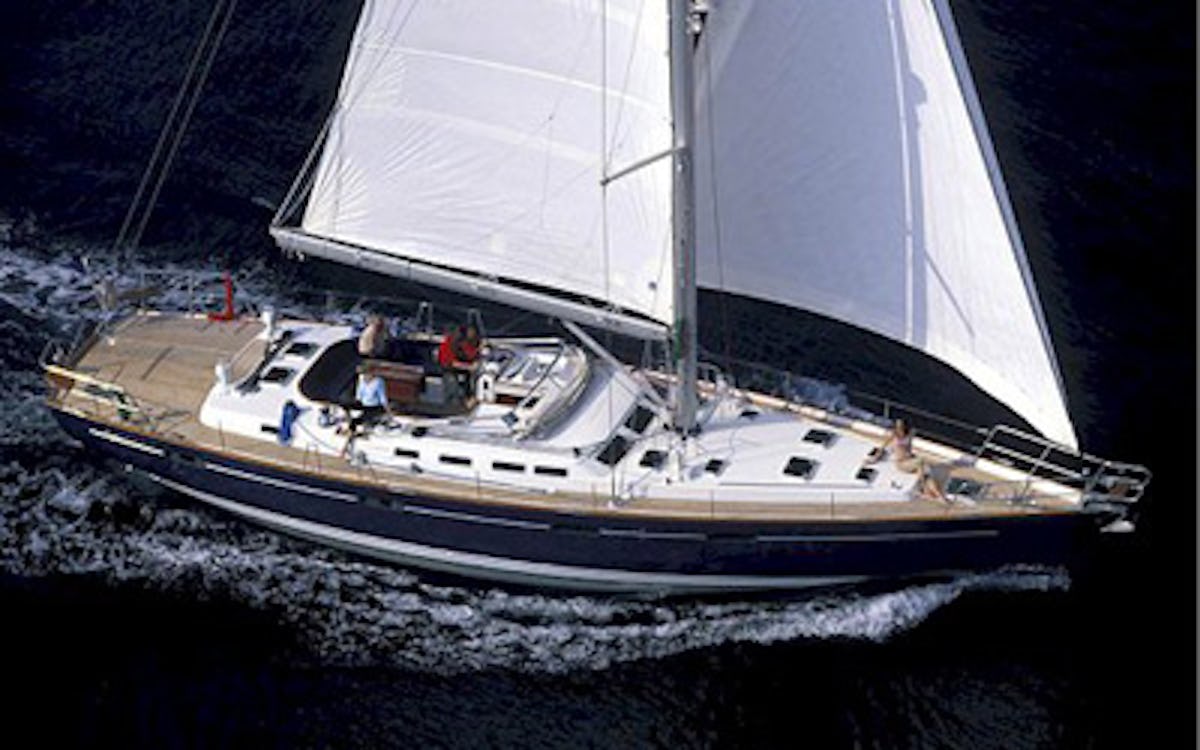 Source Beneteau
"This is a revolution, not an evolution, in marine propulsion, energy generation, storage and management," said Robert L. Kanode, President & CEO, Valence Technology. "Bénéteau is setting a new blue water standard for cleaner sailing yachts. Ports and harbors around the world will be cleaner, quieter and safer thanks to Valence Technology's safe, dynamic energy systems and the forward thinking of companies like Bénéteau Group, and ZF Marine, a pioneer in electric pod drives."
"The teams from the Bénéteau Group and Valence Technology have been working closely together for many months now, with the combination of their expertise paving the way for this major technological breakthrough," said Dieter Gust, Management Board Member, Bénéteau Group.
In a major departure from the way boats and yachts have been manufactured for decades, new hybrid-electric sea-going vessels yield low to zero-emissions, reduce fuel consumption and require less maintenance than traditional diesel marine propulsion systems. Valence Technology dynamic energy storage systems can power both propulsion and auxiliary power systems without affecting the vessel's performance or functionality. One of the most innovative features of the new hybrid drive system is the capability to recharge the advanced battery packs without the use of noisy, polluting diesel generators.
One of the advantages of a hybrid boat compared to a hybrid car is hybrid boats can be designed to harness available solar and wind energy. There are more design restrictions on motor vehicle to fit into a traffic lane and boats can carry the weight of batteries more easily and it can act as useful ballast.
Aquawatt - Boesch Boats in Switzerland
Internal combustion engines are increasingly banned on inland waterways from the USA to Europe and India. Yet people want to water ski or just zip about in a speedboat. Aquawatt puts lithium polymer batteries into these vehicles. Typical specification is 50 V 80 Ah. Such modules can be combined to larger capacity batteries . The company says, "With a weight of 30 kg for a 50 V 80 Ah battery, this will be the lightest of all available batteries". Boesch Boats of Switzerland is a user of this system and one of its boats and its lithium polymer battery assembly are shown below. 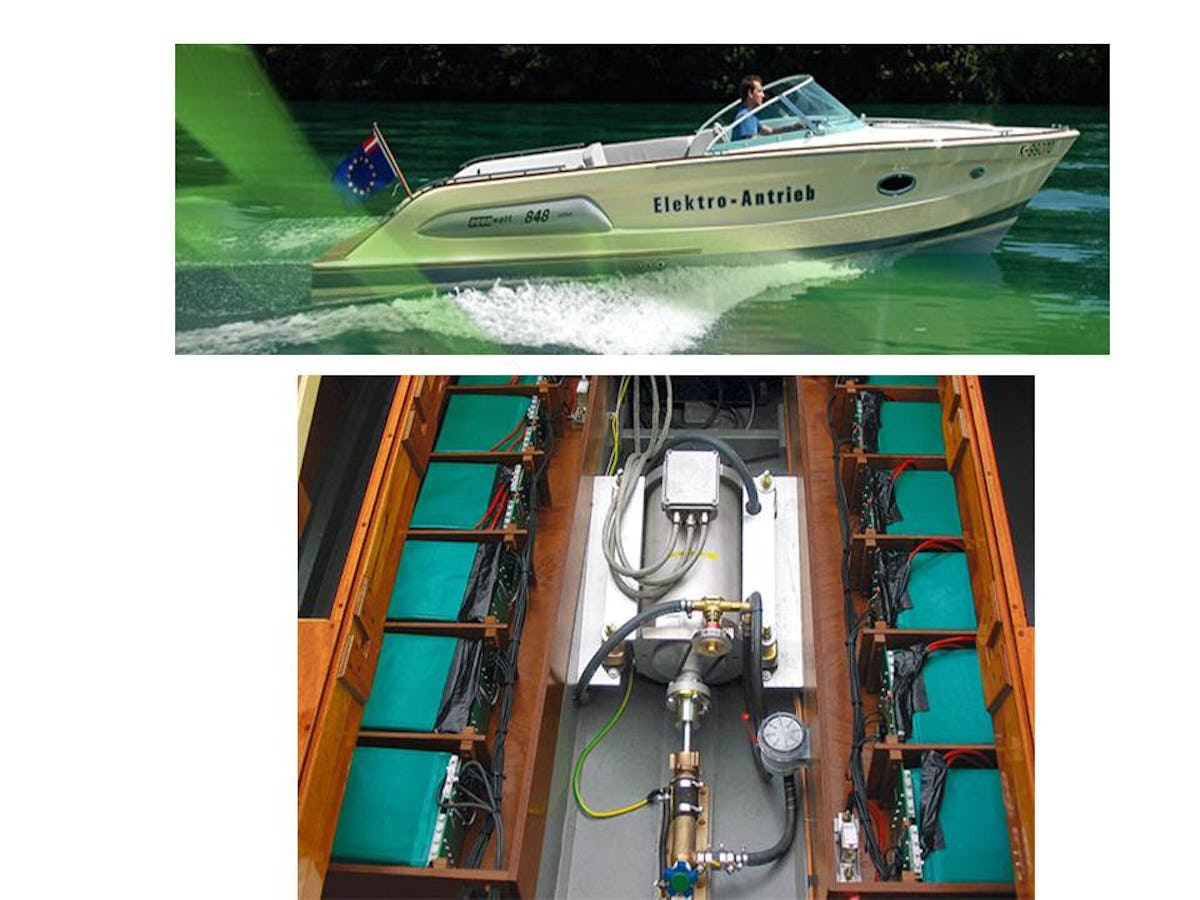 Boesch Boats of Switzerland
Erun and Boote Marian in Germany
ERUN also powers boats with lithium -polymer batteries. It claims that such batteries are much lighter , have a significantly longer life and the drawing power curve remains constant for much longer than that of conventional lead-acid batteries . Here a typical electric drive has a Kräutler -phase motor of 50 kW , 252 volts and lithium polymer batteries with 252 volts and 120 Ah capacity.
Autonomous Underwater Vehicles
In our series on Autonomous Underwater Vehicles we explained how these can have many civil and military uses and they cost up to $5 million each. Lithium polymer batteries are favored for pressure resistance and the other benefits we have mentioned for surface craft.
For more attend Future of Electric Vehicles which uniquely covers the whole electric vehicle market - land, sea, air whether hybrid or pure EV - with emphasis on future breakthroughs. Hawkes Ocean Technologies has some of the most advanced manned underwater vehicles and start up Hawkes Remotes Inc is an exciting new entrant to the unmanned underwater electric vehicle sector.

Top Technology Trends 2021 - with IDTechEx Insights
Upcoming Webinar - The Development of 5g in 2021 and Its Prospects
Mass Digitization to Drive Gas Sensor Growth to $8.4 Billion
Join the Upcoming Webinar on Carbon Nanotubes