In May 2010, Mahindra bought Reva and announced a collaboration to form a new company called Mahindra Reva Electric Vehicle Company that will see Reva's electric powertrain technology put into Mahindra & Mahindra vehicles. Mahindra took a 55.2% equity stake in Reva Electric Car Company and it has so far invested about $10 million in the new company. Mahindra makes military electric vehicles and a diesel- electric hybrid version of its Scorpio SUV. We give more on this in Part Four. Few companies in India have hybrid electric vehicle capability though KPIT Cummins has a breakthrough in hybrid conversion kits for commercial vehicles in particular.
Mahindra Reva ceremony 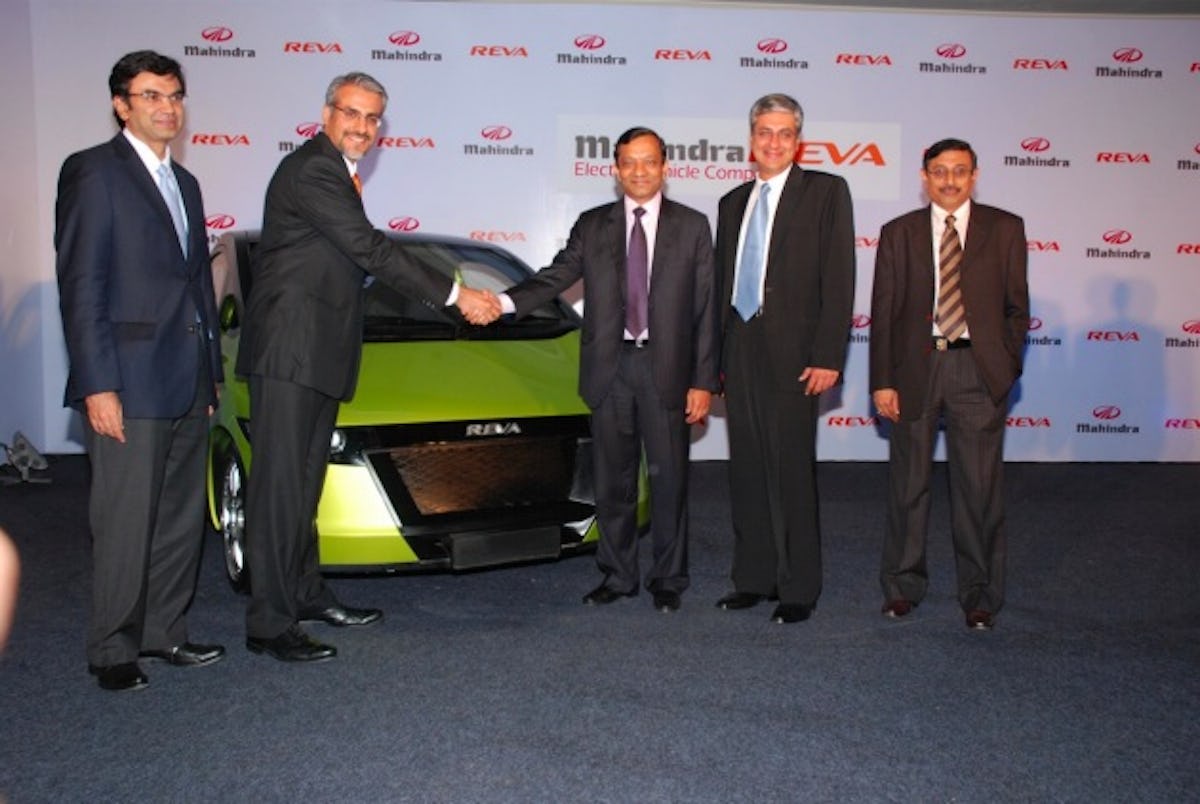 Source Mahindra
Mahindra has already sold over 50,000 microhybrids. These conventional cars automatically stop the engine when the vehicle is not moving and start it when the accelerator is pushed again, thus reducing pollution. A microhybrid usually has regenerative braking to help the battery cope to with this onerous duty cycle and it may have a larger battery, even a lithium battery. On hot days, microhybrids based on lead acid batteries could sometimes be in trouble. Mahindra vehicles - electric three-wheelers like the Bijlee and the Maxximo mini-truck, and "other M&M vehicles" will have full EV options in future.

The announcement says, "Mahindra REVA will now have access to Mahindra's vehicle development technology and distribution network, significantly enhancing its ability to launch a state-of-the-art electric vehicle for global markets."

In terms of number sold, the most successful pure EV car used on open roads in modern times is claimed to be the REVA manufactured by the REVA Electric Car Company (RECC) in Bangalore (India). 3000 were sold from launch in 2001 to the start of 2010. That compares with GEM's 30,000 neighborhood pure EVs, that are not meant for the open road, and Textron's and Club Car's million or so golf cars sold, so Reva has only achieved a modest beginning here. For example, REVA cars are sold as the G-Wiz in the UK and about 1200 have been bought there. The original versions have lead acid batteries but a lithium ion battery powered a new option in 2009 which was priced at about $14,500 vs $12000 or so for the original version (about $6,000 in India after tax breaks).
REVA pure electric car 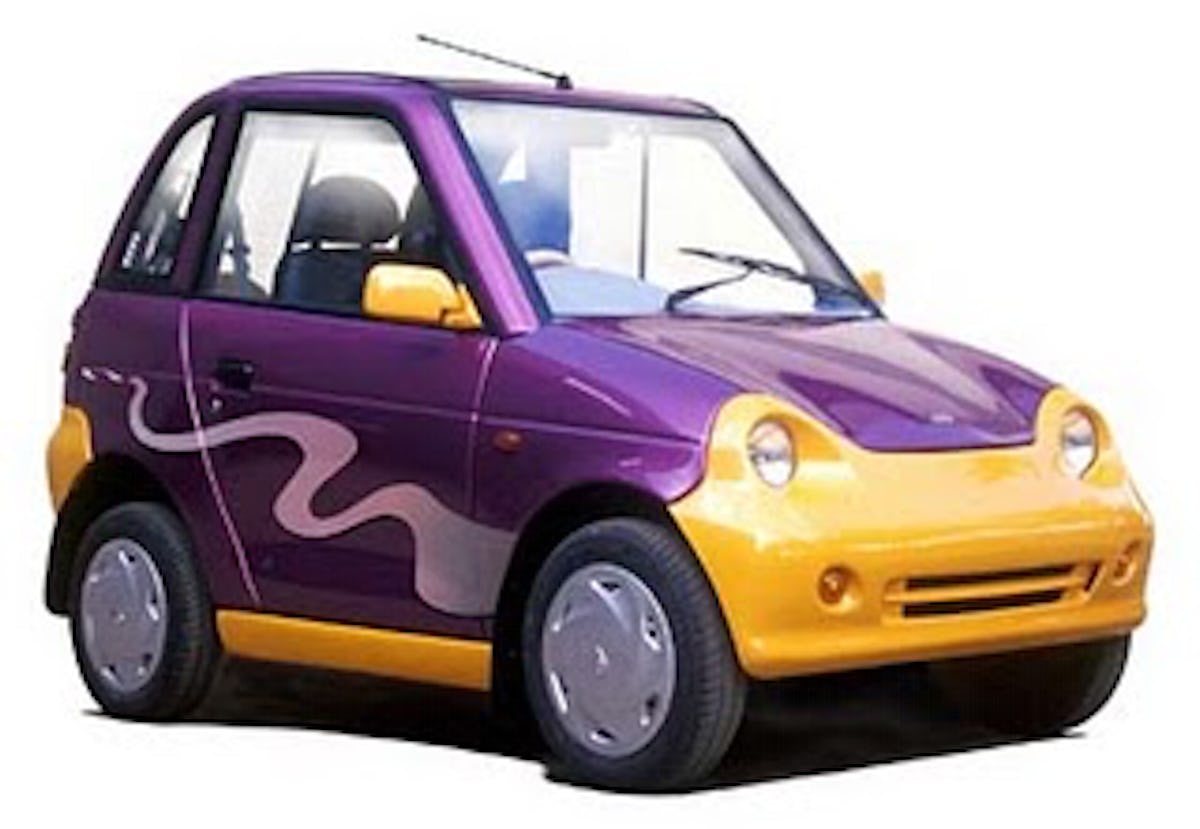 This REVA electric car is a small 3-door hatchback measuring which can carry two adults in the front and two children in the rear. The back seats fold down to provide cargo space. The maximum passenger: cargo weight is 270 kg (600 lb). It is intended for city trips and commuting, particularly in congested traffic. Registered in Europe as a heavy quadricycle (category L7), it is sold in USA with a speed limiter for use as a Neighborhood Electric Vehicle (NEV).

The REVA NXR will be the successor to the G Wiz. Pilot production for this 65 mile-per-hour electric car is scheduled for the fourth quarter of 2010 and the first customer deliveries will take place in early 2011.

The company announces in early 2010 that, "REVA NXR pilot production is rescheduled for Q4 2010 and customer shipments for early 2011. This decision was taken as a result of feedback from the Frankfurt Motor Show when we premiered the NXR, followed by a five country road show in Europe (Norway, France, Germany, Austria and Hungary), a fifty car, six month lithium-ion and telematics pilot programme with our REVA L-ion model and a winter testing programme in Sweden. We are also learning from our collaboration with General Motors in India on the Chevrolet e-Spark electrification programme and from our existing fleet of 3,500 vehicles. By next month we will have acquired 100,000,000 km of customer drive data and more than one million km of li-ion battery test data. We decided that there were simply too many good lessons to ignore.
"The NXR is our first M1 car and it will be launched in 25 countries. It is a step up from our current REVAi (G-Wiz i in the UK) quadricycle model, so we are trying very hard to listen and to learn as we go. Fortunately, we have a healthy order book from the REVAi which enables us to make improvements to the NXR rather than rush out the new model. We have taken the decision to offer to return NXR deposits to customers because we think that's only fair and have been pleasantly surprised by the relaxed response. From the emails I have seen, most of our customers respect that we have good reasons for a delay and are prepared to keep their place at the front of the queue rather than take their money back."

The announcement continued, "The delay actually has some benefits to our customers as there will be widespread subsidies available in 2011; the UK is a good example of this, but we are also anticipating announcements in several other countries later this year. In addition there will be more charging infrastructure projects live by then and as other manufacturers begin their sales and marketing campaigns there will be greater awareness and momentum in the market place. We believe that with our price advantage, REVA will be able to offer customers an affordable electric car with the latest technology and that overall demand for electric cars will be strong once people experience for themselves the joy of driving electric."
For more attend Future of Electric Vehicles which uniquely covers the whole electric vehicle market - land, sea, air whether hybrid or pure EV - with emphasis on future breakthroughs.

I would like to buy a reva I car..sad that it is not manufactured anymore..