About one million cycle rickshaws ply the Indian roads carrying about 3-4 billion passenger-km/year. They provide employment to about 700,000 rickshaw pullers, are very manoeuvrable and are completely non-polluting and hence environmentally friendly means of transport.
The electric cycle rickshaw is a natural successor to the highly polluting gasoline ones commonly also found in India. For example, three wheeler diesel tempos in Lucknow city (capital of Uttar Pradesh) produce close to 70-80 decibel noise at a distance of 1-2 m, besides belching out huge amounts of particulates into the air, according to those making measurements.
By contrast, the electric version can provide a non-polluting and a very silent transport system for urban and rural areas and busy cities. The low rolling resistance and light weight make such a vehicle very energy efficient and cost effective.
A typical low cost electric 3 wheeler rickshaw made in India is the RUZU Cab version powered by two independent 1 HP permanent magnet DC Motor fitted individually on both wheels having capacity of 2 Hp 24 volts with 150 Ah battery pack with load carrying capacity of three passengers plus one driver, with charging range of 70 kilometers per charge in standard road conditions. Some have assistance from photovoltaics as shown below.
Solar powered electric rickshaw 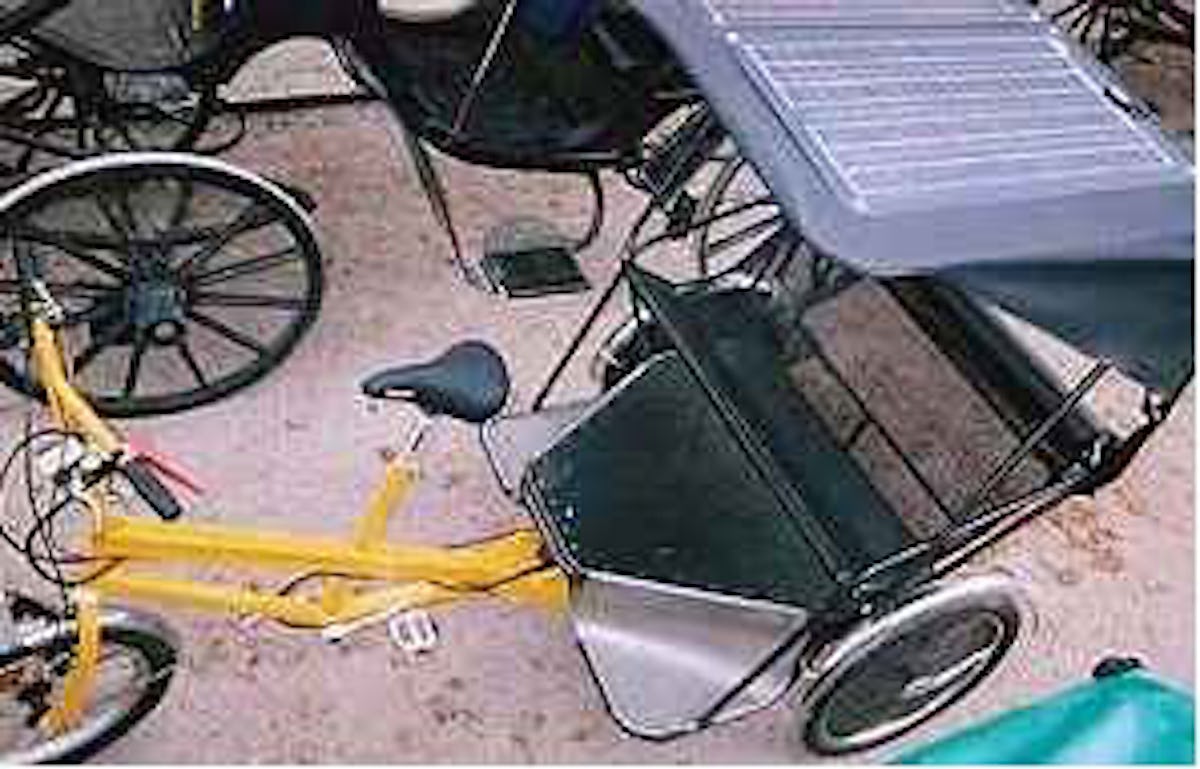 Indian companies, Ace Motors and Electrotherm have come out with an impressive fleet of battery-operated bikes (often called motorbikes) to ease the Indian pollution and fuel cost challenges.
Ace Motors is working with Changtong E Bike Company in China and has plans to roll out 2,000 bikes per month and double in the next two years. Ace Motors e-bikes priced at Rs 26,500 and Electrotherm's YOBikes are ranged between Rs 13,999 and Rs 23,249. The Ace Motors electric "motorcycle" runs 200 km on a 6-8 hour charge.
"The e-bike is virtually maintenance free. It has no gears, no engine, no belt or chain drive, zero emission, no pollution, electronic start and accelerator, besides it is exempted from the Central Vehicles registration act by the Automotive Research Association of India (ARAI) and does not require any registration or license," says Kumar Raval, managing director, Ace Motors.
Main Image: Electrotherm electric YO Bike
Source: Electrotherm
For more attend: Future of Electric Vehicles which uniquely covers the whole electric vehicle market - land, sea, air whether hybrid or pure EV - with emphasis on future breakthroughs. KPIT Cummins of India will present and IDTechEx will give ten year forecasts for the main countries of East Asia including India.