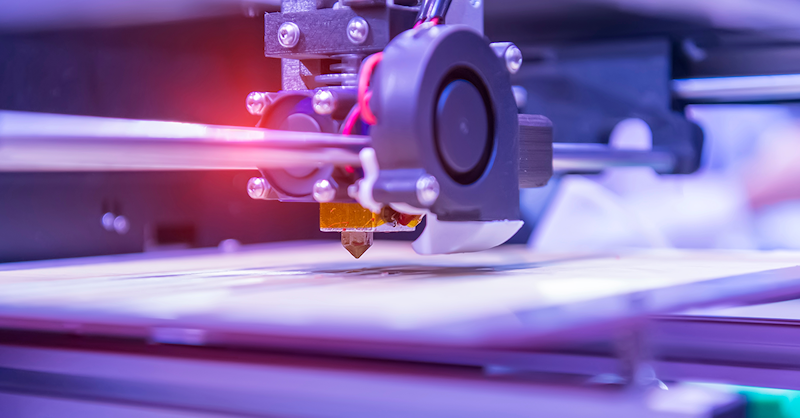 3D printing began its road to recovery in 2021 after a difficult year in 2020, where the entire industry felt the effects of the COVID-19 pandemic. Within this year of recovery, IDTechEx has noted the development and/or continuation of micro-trends within each major 3D printing subspecialty: polymer, ceramic, composite, and metal additive manufacturing. In this article, IDTechEx identifies and explains the micro-trends for each material specialty that are worth keeping an eye on going into 2022.

3D printing has always claimed to be sustainable due to its reduced wastage in manufacturing compared to other forms of manufacturing like machining. However, the most popular materials have always been carbon-based polymers, which are inherently not sustainable since they are derived from non-renewable resources. With more awareness of this reality, more 3D printing materials suppliers and companies are releasing polymers for 3D printing with green characteristics, like recyclability and reusability; this trend came into full force in 2021 as a different approach to sustainability in 3D Printing.
For example, chemical company Braskem teamed up with materials recycling company Vartega to create a polypropylene filament that includes 100% recycled carbon fiber. This filament release is part of a novel carbon fiber filament recycling program that Braskem and Vartega are launching, which will encourage users of these filaments to appropriately recycle them. Another company releasing a "green" filament is Fillamentum, who recently launched NonOilen, a 100% biodegradable polymer filament. NonOilen, which is composed of polylactic acid (PLA) and polyhydroxybutyrate (PHB), is also made from bio-based polymers (meaning polymers derived from renewable resources).
However, filament manufacturers are not the only type of 3D printing feedstock that is getting the sustainable treatment. In 2021, Materialise launched Bluesint PA 12, a 3D printing powder made from 100% re-used powder. The goal of Bluesint PA 12 is to decrease the wastage of powder in selective laser sintering, which turns up to 50% of the powder in the bed into waste. With companies reiterating their commitment to sustainability, IDTechEx will be closely watching whether more biodegradable or recyclable 3D printing polymers come to market in 2022.

The overarching trend for ceramic 3D printing in 2021 was the launch of a variety of new materials through different technologies. These materials from 3 main places, the first of which is 3D printing companies entering into ceramic 3D printing for the first time. For example, Boston Micro Fabrication, who focuses on micro 3D printing with their projection micro-stereolithography technology, released a high-temperature alumina resin for micro-ceramic components.
The other source of new ceramic materials for 3D printing came from chemical or material companies; notably, these companies were minimally involved in 3D printing before the release of these materials. For example, American company Emery Oleochemical's Green Polymer Additives division released a polymer binder system that can be used for metal or ceramic filament extrusion printing. In addition, GC Advanced Materials Solutions, who are based out of Hong Kong, have qualified silica and mullite powders that can be used with a polymer binder (like the one Emery developed) to create ceramic filaments for extrusion printing.
The last source of new materials came through strategic partnerships. The first was between AGC Chemicals and binder jetting printer manufacturer voxeljet. AGC had previously produced a silica additive for 3D printing, but this was their first technical ceramic developed for 3D printing. The two companies worked together to create Brightorb, a high-performance ceramic powder specifically for investment casting molds and shells.
The second partnership was between composites start-up Fortify and Tethon 3D, a company specializing in ceramic 3D printing materials. They developed high purity alumina and aluminum silicate resins for Fortify's FLUX CORE printers, which are made to handle filled photopolymer resins. The two companies intend to develop more technical ceramic resins in the future.
What is particularly notable about these materials releases are the companies releasing them. Other than voxeljet and Tethon 3D, none of the companies mentioned have dabbled in ceramic 3D printing before. This could foreshadow an expansion of the ceramic 3D printing field in the near future, something IDTechEx will look out for in 2022.

In recent years, there has been a number of partnerships formed to push forward technology development, material development, and adoption of composite 3D printing. Partnership formation continued unabated in 2021, mostly with an emphasis on materials development collaborations.
As mentioned previously, the Braskem and Vartega partnership is just one of these major composite 3D printing partnerships for materials development.
First, materials supplier Solvay has partnered with Swiss start-up 9T Labs. 9T Labs has created a hybrid composite printing system that combines 3D printing with molding, and the Solvay partnership aims to develop Solvay's materials portfolio like CF-PEEK, CF-reinforced PA, and CF-PPS for 9T Labs printers.
The second partnership is between Japanese multinational company, Ricoh, and Impossible Objects, which is a start-up making composites through sheet lamination. Sheet lamination is a very niche AM technology that very few companies operate in. Some of those that used to have now discontinued their sheet lamination products, like EnvisionTEC, or have closed, like Solido.
Impossible Objects is hoping to revive the technology through their Composite-Based AM (CBAM) technology, which they are expanding in Europe through Ricoh Europe's AM service bureau, which will now include the technology. The Ricoh/Impossible Objects partnership was not the only one formed in 2021 for the CBAM start-up. In May 2021, Impossible Objects announced a collaboration with Owens Corning to develop fiberglass composites for 3D printing. The goal of the partnership is to scale CBAM technology for high-strength, high-volume applications.
One notable similarity is that all partnerships mentioned involve established materials or technology companies like Solvay, Ricoh, and Owens Corning partnering with upcoming start-ups. As more large companies continue to explore the potential for expansion into 3D printing, it is likely to see the formation of more of these types of partnerships, which IDTechEx will be tracking in 2022.

Bound metal extrusion (BME) (also known as metal-polymer filament extrusion, or MPFE) has received plenty of 3D printing press in the last few years, as market leaders Desktop Metal and Markforged accelerate their expansion with SPAC mergers and acquisitions abound. BME refers to the extrusion of polymer filaments loaded with metal powders; after printing, BME parts undergo debinding (to remove the polymer binding the metal powder into a filament) and sintering (to fully densify the metal part). From a technology standpoint, 2021 saw not only continued support and development for BME systems from the key players but also newer companies entering the space with their own BME systems.
In early 2021, Desktop Metal launched the Studio System 2, an upgraded version of its original desktop-level BME printer, the Studio System. The Studio System 2 has notably eliminated the solvent debinding step normally required for BME through the development of new material formulations for the Studio System 2. This significantly reduces the post-processing time needed for parts made by BME, thus increasing the potential efficiency of the technology. Markforged also announced the release of their next-generation BME system, the Metal X Gen 2, though the major innovation with this release is software-related.
However, while the market leaders have made notable moves, what is especially interesting for the technology are the number of companies releasing BME printers in 2021, with most launching them at Formnext 2021. For example, Spanish printer manufacturer BCN3D announced a "Metal Pack" that can be attached to their Epison line of printers to enable extrusion of BASF's Ultrafuse metal filament. Additionally, 3DGence announced their ELEMENT line of BME printers, which will not use BASF's Ultrafuse filament in favor of their own metal filaments. Belgium-based start-up FuseLab debuted their own BME printer capable of printing both metals and polymers, featuring dual extruders, an open filament system, and a heated chamber. With all these new entrants to BME in 2021, IDTechEx will be monitoring if the field picks up even more steam in 2022.
For the full portfolio of 3D research available from IDTechEx please visit www.IDTechEx.com/Research/3D.
IDTechEx guides your strategic business decisions through its Research, Subscription and Consultancy products, helping you profit from emerging technologies. For more information, contact research@IDTechEx.com or visit www.IDTechEx.com.