At the forthcoming Energy Harvesting USA event in Boston Massachusetts, 16-17 November, Prof Gang Chen of Massachusetts Institute of Technology will talk on "Power from temperature difference: thermoelectric technology for energy harvesting". He has published extensively in the area of nanoscale energy transport and conversion and nanoscale heat transfer. He serves on the editorial boards for four journals in heat transfer and nanotechnology and chaired the advisory board of ASME Nanotechnology Institute. He is the director of Solid-State Solar-Thermal Energy Conversion Center funded by the US DOE's Energy Frontier Research Center's program. He co-founded GMZ Energy. 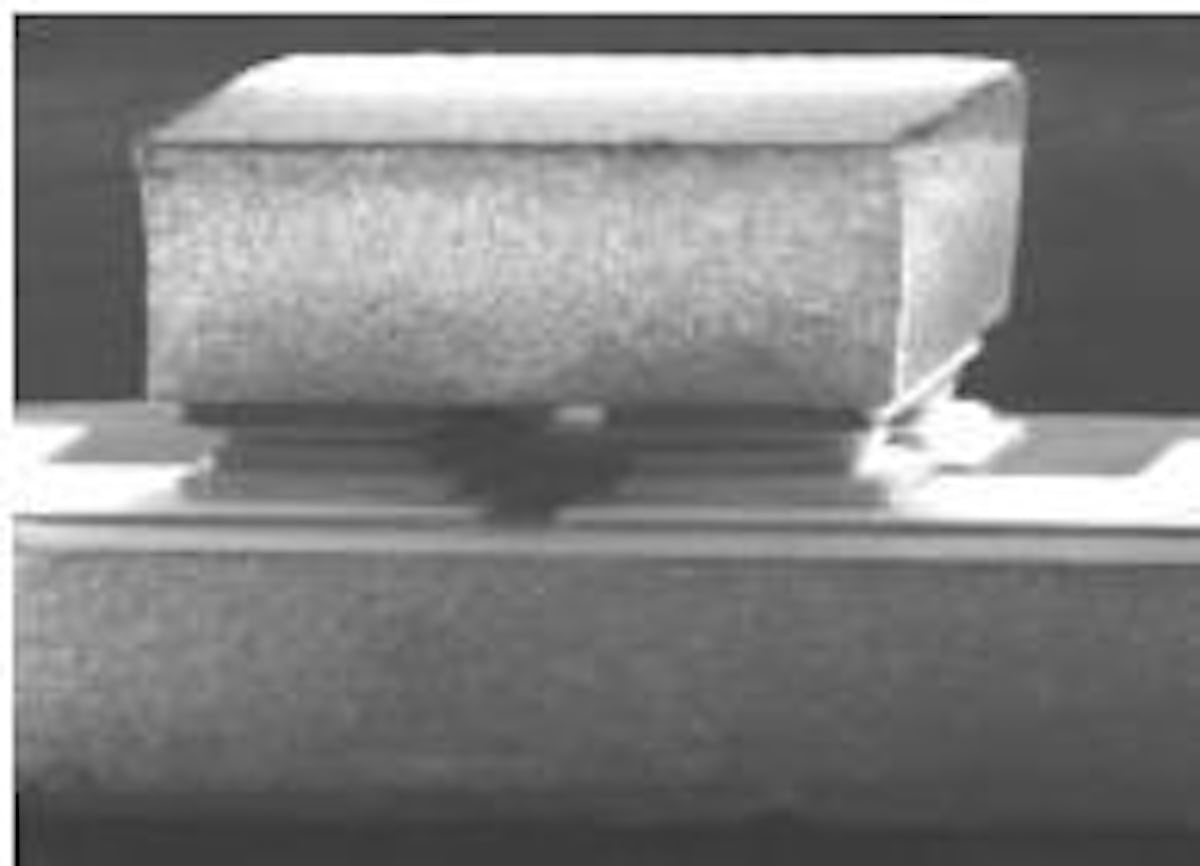 Source: Nextreme
Making its thermal energy harvester from quite a different semiconductor process technology is Nextreme Thermal Solutions (Durham, NC). It generates electricity from the difference in temperature across an array of flip-chip bumps, basically conventional technology —except they include a thin film of 10-20µm single microcrystals of bismuth telluride with special dopants, deposited by a unique MOCVD process. The company currently sells another version of the same basic technology that runs in reverse to pump heat out of laser diodes and other heat sensitive devices.
Nextreme has demonstrated power output of 16mW with a 70°C differential between the hot and cold sides of the device, for power density of ~0.6W/cm2, more at higher heat differentials. Four of the sunflower-seed sized energy harvesting modules can provide 4V to charge a tiny thin-film battery from Infinite Power Solutions in about 20 minutes, depending on the heat difference available. But even the modest difference of 30° F (10°C) between body temperature and common ambient temperatures indoors or at night of 70° F or below can be enough to trickle charge a battery for many sensor applications, says Paul Magill, VP of marketing and business development.
Magill argues the near-term market opportunity is for wireless sensor systems using energy harvesters and trickle charged batteries for industrial condition monitoring, such as strain gauges monitoring aircraft structures and sensors tracking smoke-stack emissions. But a much bigger opportunity going forward may be to use the wasted heat produced by the automobile to run some of its internal systems. "Strain gauges may come to market this year," says Magill, "but other applications are still one to two years out."
EnOcean GmbH and Schneider Electric have worked on thermoelectric harvesting for industrial wireless sensors.

There is increasing interest in using thermoelectric harvesting in healthcare despite its inefficiency and the relatively modest thermal gradients encountered. This is because thermoelectric have no moving parts and no maintenance and, while not cheap, they are seen as affordable for these critical components. At the forthcoming Energy Harvesting USA event in Boston Massachusetts, 14-15 November, GeorgiaTech, Biorasis and Tagsense describe new mass market electronic products for healthcare such as glucose monitors and diagnostic patches. Dr Thierry Caillat of NASA looks at high temperature thermoelectric harvesting.
For more read : Energy Harvesting and Storage for Electronic Devices 2010-2020
and attend Wireless Sensor Networks, Energy Harvesting and RFID in Asia
Energy Harvesting & Storage and Wireless Networks & RTLS USA 2010