A paradigm shift for the $25 billion outdoor advertising industry

The $25 billion outdoor advertising industry is turning from the old sluggish platform of static poster advertisements to a new media platform thanks to digital displays. LCD and plasma displays have already made a significant impact on the indoor advertising industry, such as in train stations, shopping centers and airports. The ability to change advertisements throughout the day and to show much more memorable animations and video, are key reasons why digital advertising is much more lucrative for advertising companies.
The new model is now to sell time rather than display space. Indeed, Clear Channel, one of the largest operators of outdoor advertising media, reported a sales increase of up to 900% in some circumstances where digital advertising had replaced the old boring static versions.
Advertisers have a huge amount to gain from converting their static advertisement sites to digital versions. In many countries, there is a limit on the number of new billboards that can be placed, which has resulted in a somewhat saturated market. Digital signs have already demonstrated to advertisers that they can help to tackle this by taking market share from other media platforms and they also improve performance - that is, they provide a more memorable experience for the target audience.

However, while digital advertising is exploding in indoor environments (where they even sometimes double as signage), that same technology isn't suitable for most of the millions of larger outdoor billboard posters.
LCD and plasma screens are small and become too expensive to daisy chain to create an area the size of a typical outdoor billboard. Here, LEDs have been used, but they have some significant limitations which prevent them from being adopted at most sites.
Firstly, they are much larger, thicker and heavier devices and usually the billboards need to be reinforced to support the extra weight. More importantly, unlike static printed billboards, LEDs emit light and there are tough government restrictions dictating that they should not dazzle drivers or be a nuisance for residential homes at night. These restrictions are often locally governed so there is no one rule across the whole country. That means each site needs its own approval. In addition, power consumption is also an issue.
Eric Penot, Digital Media Director at the $2.6 Billion advertising media company JCDecaux S.A, says, "The existing products based on LCD/Plasma/LED present a number of challenges to the Digital Out-of-Home (DOOH) industry - size, energy consumption, visibility, weight, etc. We have a long wish list."

There are now other viable options for large area digital billboards, with even more options emerging. The end game of most of these technologies is that they can be printed - just like static posters - but instead of printing color ink functional materials are printed which, when stacked up, form electronic displays. This is part of the new world of "printed electronics" - it has the advantage that it can be made cheaply over large areas on flexible substrates.
Already in use are screen printed electroluminescent (EL) displays. They have been used for bill board posters around the World. They are printed on plastic and are applied in a similar way to conventional static posters - they are unrolled and stuck on the billboard. They emit an even light across the surface which is not a spot light such as an LED and therefore it is less of a problem for motorists. The biggest such display is in Heathrow Airport in the UK, measuring 75 meters long. An example of a billboard using this technology is shown below. 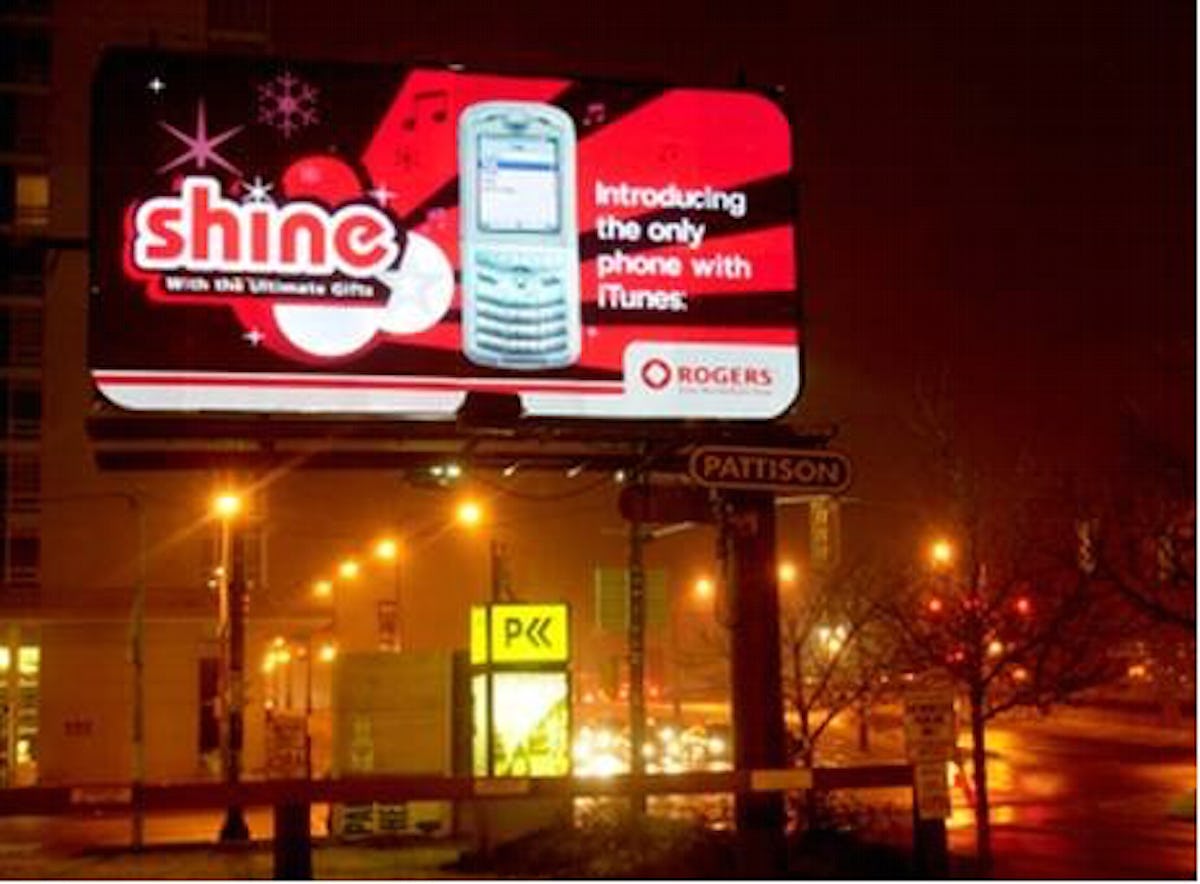 Source: Rogers Corp
The images are "locked" when made - so the image cannot be changed later. The lighting effect is also not as visible during the day, where it competes with the sun.
We now have non emissive displays which are very promising for large area advertising. These do not emit light at all and rely on background lighting to reflect the image. There is therefore no problem with using these outdoors. Such an example is shown below. 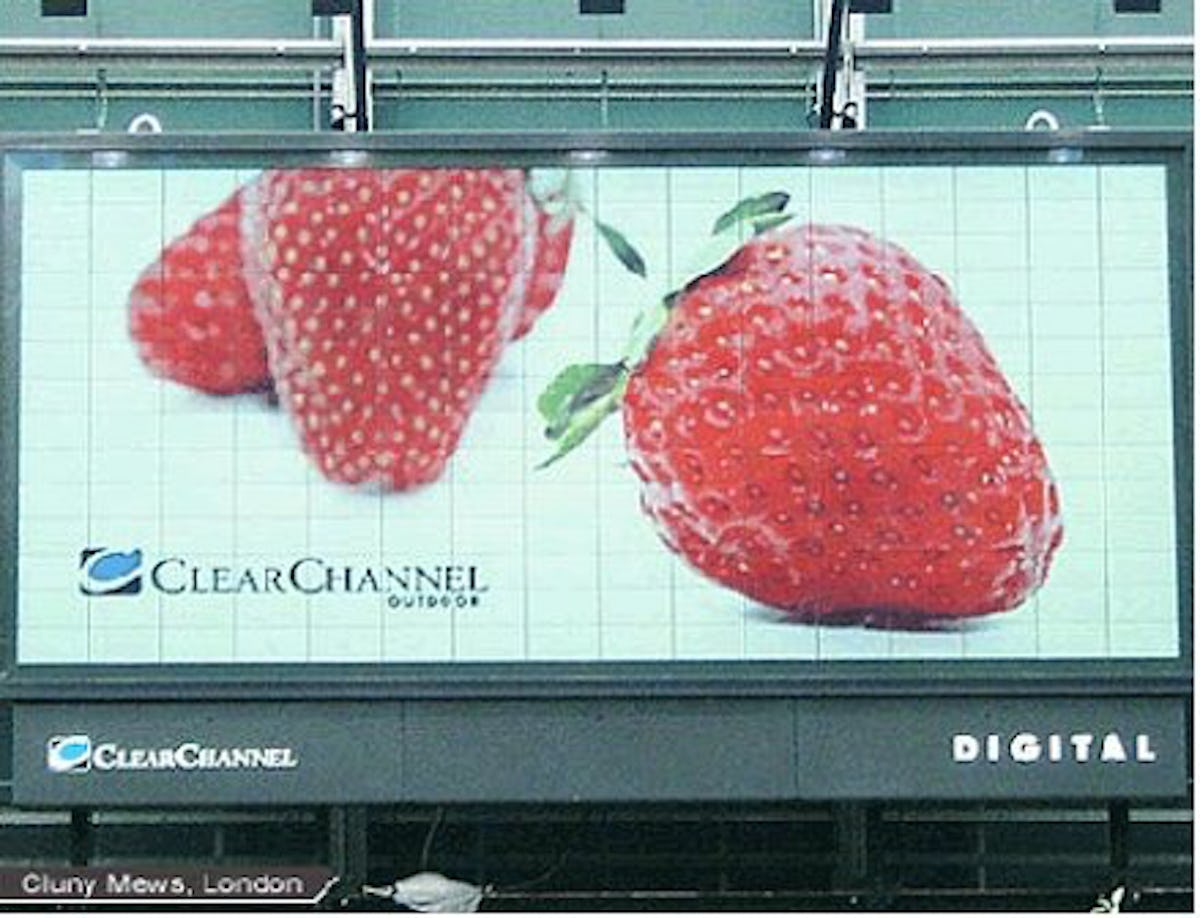 Source: Magink
Bryan Morry, Executive Director at the Gillette Sports Stadium, uses this technology for large area displays of baseball players. The four posters each measure 40 foot long and 5 foot wide. It is a full color digital ink display, which can refresh 60 times in a second, enabling video to be played. Morry reports, "We chose the technology because it met our multi-tiered goals, which included creating something unique that would have a wow factor for our guests and would also provide an artistic architectural look. The display needed to retain its image quality in an environment that includes a great deal of natural light, and the panels were perfect for the setting in that they actually benefit from the light, which is different than alternative displays available at the time."
These displays are, however, on glass and therefore are not flexible or very lightweight yet which does not make it suitable for all requirements.
Next comes e-paper technology, which is relatively mature in its use on E-readers such as the Amazon kindle. Color versions are due to appear this year, and while the E-reader market is the main priority now, the technology developers see large area outdoor advertising as a huge opportunity.
This technology is bistable - it only requires power to change the image and not retain it - so it fits very well with the need of advertisers. Flexible LCD displays and other forms of bistable displays are now in use as small displays but they are also being scaled up to larger areas.
Penot of JCDecaux reports, "At this point the printed electronic industry has not been able to deliver anything practically useful for us but we have high hopes that it'll come out with something soon."
In addition to these choices, the largest display companies in the World are working on replacing LCD displays with another technology - organic LEDs (OLEDs). These are being targeted for TVs initially but eventually they will be suitable for bill board displays - they will be printed onto flexible substrates and offer superb contrast, viewing angles and resolutions. In 2010, Samsung announced its commitment to OLEDs by investing $2.5 Billion in OLED manufacture equipment and related infrastructure. Indeed, GE is close to selling printed, flexible OLED lighting.
IDTechEx has interviewed several media companies and we find that they seek displays which are low power, lightweight, have life expectancy suitable for ROI and they do not need full video motion but good color rendition is a must e.g. "coke red".
For more information, hear from JCDecaux talk about their business model, industry and needs in addition to the Gillette Sports Stadium and many others about how they see the future for digital large area outdoor advertising at the Printed Electronics USA 2010 conference and exhibition in Santa Clara, CA on Nov 30 - Dec 2. There will be many product demonstrations for you to experience and vendors from all applicable technologies will be present. See www.IDTechEx.com/peUSA for details and to register.

It is very exciting to see the significant impact digital signage is making on the indoor and outdoor advertising industry these days. In fact, a recent statistic from PQ Media predicted that total ad spending on DOOH networks will jump from $2.47 billion in 2009 to $3.8 billion in 2014, with a compound annual growth rate of 9.4% - now that is impressive. It is nice to see the industry is beginning to recognize the positive effects digital signage can have on the industry as well as the audience viewing the displays, like you stated above. It's clear DOOH is one medium that will continue to do well as the industry moves from static billboards to a new animated advertisement. For more information on DOOH and digital signage follow us on Twitter @A2aMEDIA.

Very useful information and thank you, we liked it.