Many ways to harvest energy from shock absorbers

In the new age of the electric vehicle, almost everything has to be rethought. In one hundred years, people will laugh at today's hybrid and pure electric vehicles rather in the way we laugh at motor vehicles from 1880 that looked like something dragged along by a horse because that was the starting point.
Inside and out, today's electric vehicles look almost the same as what went before. We have traction batteries and electrical and electronic controls in big lumps because that is what they had to look like in the past, together with masses of wiring. We have a big lump of noisy, dirty, shaking internal combustion engine in a hybrid because that is what an engine has looked like in the past.
Bring in smart electronic surfaces (photovoltaics, printed components), wireless links (VirginiaTech CEHMS), laminar conformal batteries and mini turbine range extenders (Bladon Jets Ltd). Then we really will have moved on in cost, performance and passenger safety, comfort and space available.
However, until we figure out how to make elasticated vehicle bodies we shall need shock absorbers (Levant Power Corporation, Eindhoven University of Technology), so they might as well generate electricity. Only 10-16% of fuel energy is used to drive a car along. Hybrid vehicles recapture some of the energy usually lost in braking but the dissipation of vibration energy by shock absorbers in the vehicle suspension remains untapped. Energy harvesting shock absorbers will be used on everything from earthmovers to buses, trucks and cars - even bikes.
A unique event, the IDTechEx Future of Electric Vehicles in San Jose California December 7-8, will look at these future breakthroughs, ignoring the "Surrey with the fringe on top" approach with today's electric vehicles.
Unusually, it will look at all electric vehicles - land, water and air, military and non-military - because they are intimately related in nearly all respects. For example, T-Ink, Ink will show how they all have to adopt the new printed electronics and electrics.

Past work on harvester shock absorbers

There has been a lot of work on harvesting from shock absorbers. In an ongoing research project of over 24 years, Bose, the loudspeaker company, has created an electromagnetic suspension system intended to replace traditional dampers and springs with electronic actuators and linear motors to generate electricity.
In 2005, David Oxenreider of Boiling Springs, PA, presented a design for an electricity generating shock absorber. Experimental Bosch suspension systems have generated electricity. More recently, Electric Truck, LLC has exclusively optioned commercial rights to a technology from Tufts University that uses regenerative shock absorbers to recharge the batteries of any hybrid electric and electric-powered vehicle while it is driven.
You will find in tough to buy these products, however. Problems have included the devices being too large, too expensive, too inefficient in converting electricity or just poor shock absorbers because they dispensed with the spring or had the wrong damping characteristics.

Will the next generation be more successful?

More recently, shock absorbers that generate electricity are being developed by Cambridge, MA-based Levant Power, a spinout from MIT.
The device can, they suggest, reduce fuel consumption by 1.5-6%, depending on the vehicle and driving conditions, and improve vehicle handling. A presentation on the work will be made at Future of Electric Vehicles.
The Levant electricity generating shock absorber 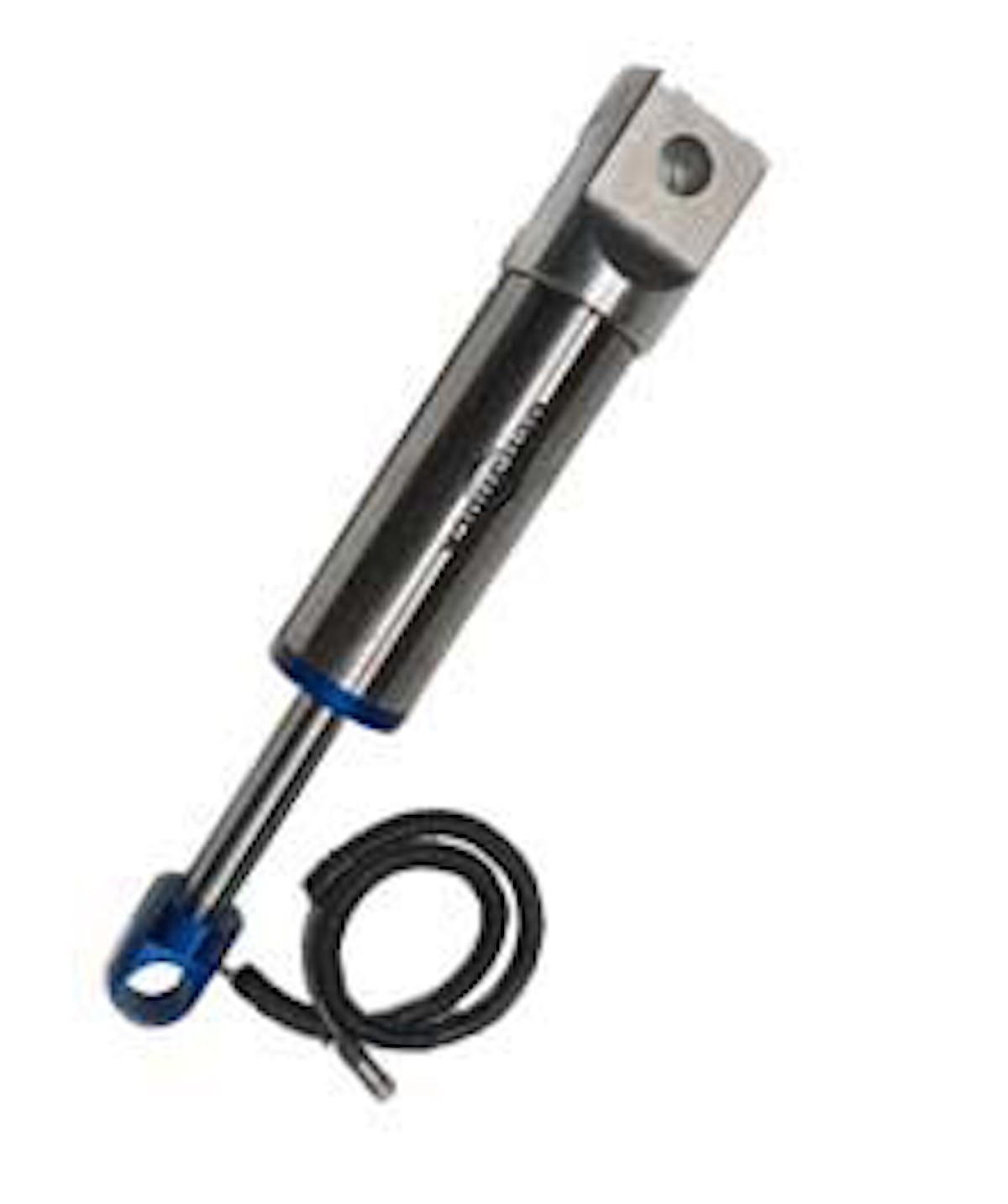 Source: Levant Power
Levant has demonstrated the technology in road tests with a Humvee (work on the electric military Humvee drive train will be covered at the event) and will expand testing to trucks, buses and other vehicles this summer.
The shock absorbers look like conventional ones from the outside, except for a power cord coming out of one end. They can be installed in regular vehicles by mechanics. They plug into a power management device that can also manage power from other sources, such as regenerative braking systems, the new piezoelectric vibration harvesters to be presented at the event, thermoelectric devices that convert waste heat into electricity, or conformal solar panels to be discussed at the event. The power is then fed into the car's electrical system to reduce the amount of load on the alternator, future battery management systems also being a topic at Future of Electric Vehicles.

As in a conventional shock absorber, the Levant technology uses a piston moving through oil to damp down movement. Levant has developed a modified piston head that includes parts that spin as it moves through the oil, turning a small generator housed within the shock absorber.
To improve vehicle handling, the power controller processes information from accelerometers and other sensors to change the resistance from the generators, which stiffens or softens the suspension. Wireless sensors and actuators will be used in future and they are to be presented at Future of Electric Vehicles.
For example, if the sensors detect the car starting a turn, the power controller can increase the resistance from the shock absorbers on the outer wheels, improving cornering, says David Diamond, the vice president of business development at Levant.
The system performs best on heavy, off-road vehicles moving quickly over rough terrain, so the company is targeting military applications such as the vehicles of BAE Systems, that presents at the event. Levant has emphasized using off-the-shelf parts, where possible, to keep down costs.
Diamond notes that active shock absorbers have failed commercially in the past because they were too expensive. What distinguishes the new system is its relatively low cost and ability to generate electricity. The shock absorbers and control electronics will cost slightly more than conventional shock absorbers, he says, but in applications such as commercial trucking, the fuel savings are expected to pay for the extra costs within 18 months. Levant does not plan to manufacture the technology itself, but rather to license it to a manufacturer or create a joint venture.

On the other hand, Lei Zuo, a professor of mechanical engineering at Stony Brook University, is developing systems that use no fluids, only electromagnetic resistance but one of the biggest challenges in designing such systems is making them small enough to fit into existing vehicles, yet big enough to create a useful amount of electricity.
A hollow coil assembly and magnets use vibrational energy from the vehicle's suspension to move up and down. Ring-shaped permanent magnets and high magnetically permeable spacers are stacked on a rod of high reluctance material. Like-poles of adjacent magnets face each other pushing the magnetic flux outward. This assembly in an outer cylinder of high permeability material to further increase magnetic flux density in the coils. The copper coils are wound on a Delrin tube and designed to align with the magnet stack and are connected to a rectifier set-up. The copper coils move inside the magnetic field and a voltage is generated. Energy density and efficiency are being improved in further work. If successful, this could also be an elegant part of the devolved and largely wireless vehicle concepts that Fiat Central Research will present at Future of Electric Vehicles. 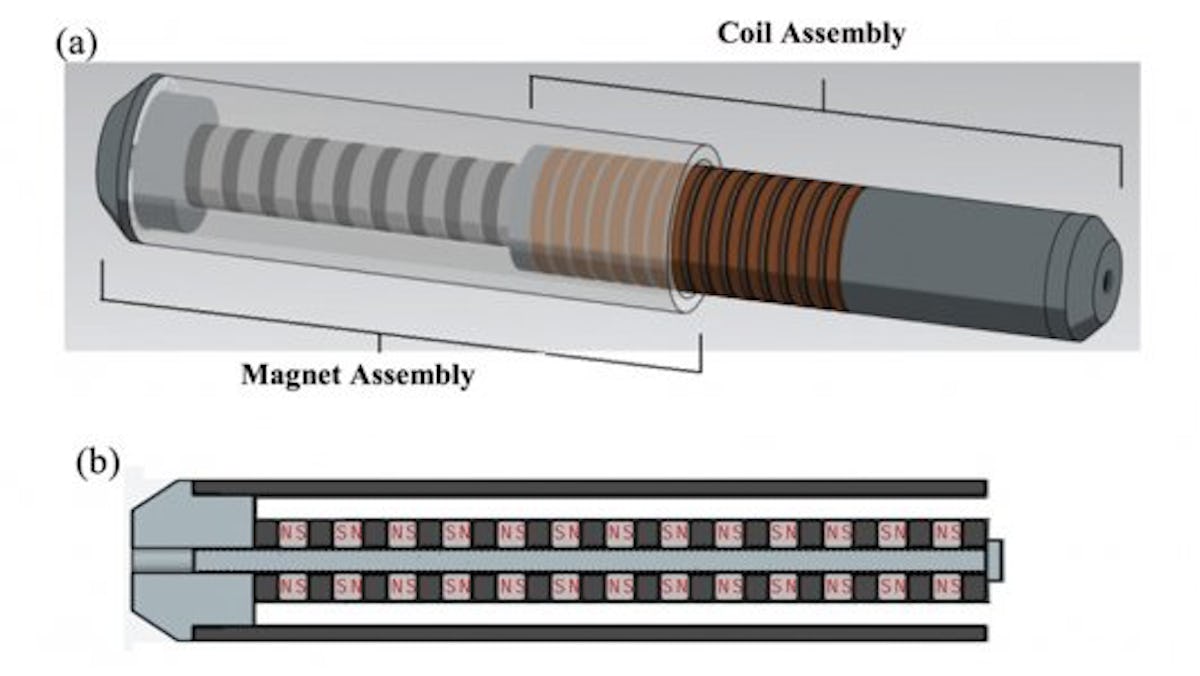 Source: Stony Brook University
The researchers predict that, with the regenerative shock absorbers put on all four wheels, it should be possible to recover a total of around 256 watts under such driving conditions. This is not inconsistent with each MIT device being predicted to generate up to one kilowatt on a truck.
At the unique event, Future of Electric Vehicles printed electronics and electrics, next generation batteries, energy harvesting, wireless sensors, turbine range extenders, smart materials and new components of universal appeal will be presented.
Best-in-class speakers from across North America, Europe and East Asia have been selected with space for a few more. This is attracting those needing the big picture and best practice from wherever it comes and on whatever vehicle it is used for the first time.
The evolution of both hybrids and pure electric vehicles over the next ten years will be analysed, with scoping of global demand by types - land, water and air. The breakthroughs to come are the focus. For full details, visit www.IDTechEx.com/evUSA.