The use of energy harvesting in electric vehicles has mainly been focussed on cars but that is about to change. After all, an energy harvesting shock absorbers by Levant Power Corporation on a truck can generate one kilowatt and some heavy duty electric vehicles offer large areas for solar cells and other forms of harvesting. Clean Power Works is addressing that.
There are about 250 manufacturers of heavy industrial vehicles worldwide but most do not make EVs. Between them they will make about 700,000 of these vehicles in 2010. Most participants have under $20 million sales yearly. Mid-sized companies have largely vanished in line with marketing theory for maturing markets. This industry was characterised by a dash for market leadership as the market matured, with frequent purchases of competitors. Many participants seek global reach with manufacturing in major markets. Some promote a global brand to support this. Others diffuse their image over many brand names and even have competing subsidiaries. Some specialise in the largest or the smallest machines with internal combustion engine ICE and/or EV power. By 2015, the demand for heavy industrial electric vehicles will be comparable to that for light industrial/commercial electric vehicles as shown below.
Global market value for heavy industrial electric vehicles vs light industrial/commercial electric vehicles in 2015 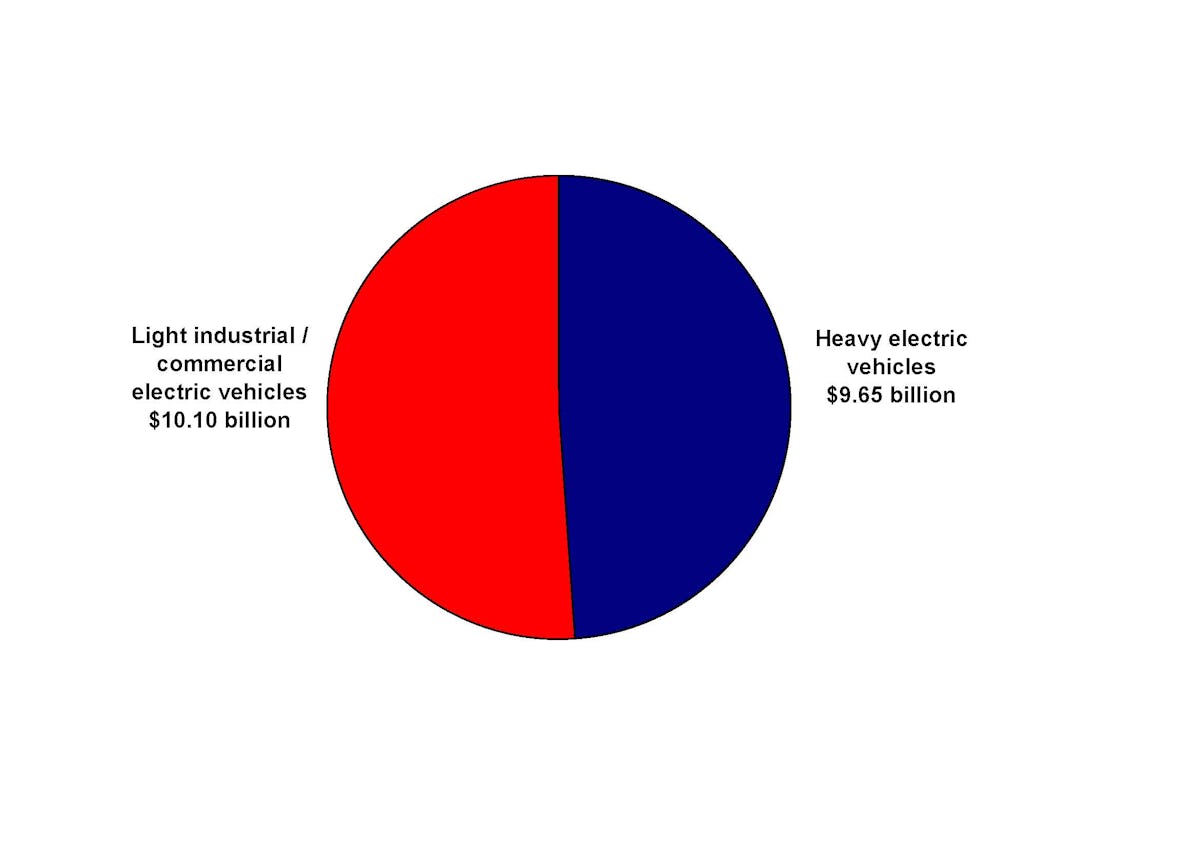 Hybrids are the new growth market

Potential sales growth of heavy industrial vehicles mainly lies outside the saturated market of forklifts where most are already pure electric vehicle. Several manufactures now offer lithium battery options, to get away from the tyranny of one battery set in use, one cooling down and one charging per vehicle. The rest are still powered by lead acid batteries. Expect solar cell covered charging stations in future.
The growth potential comes because hybrid technology is of great relevance to heavy outdoor vehicles, where it is little used at present. It is likely to be eagerly adopted, now it is both affordable and reliable, because of the need for high power delivery for long periods of time and frequent stop-start. A hybrid heavy electric vehicle for relatively long range outdoor use outperforms the traditional type while providing cost saving as well. For example, it can deliver higher torque from stationary. Indeed, heavy mover Caterpillar CAT of the USA now has several diesel electric series-hybrid heavy tractors and bulldozers. Expect regenrative braking in future and then electrodynamic harvesting in active suspension developed at Eindhoven University of Technology.
Caterpillar CAT series hybrid diesel electric bulldozer 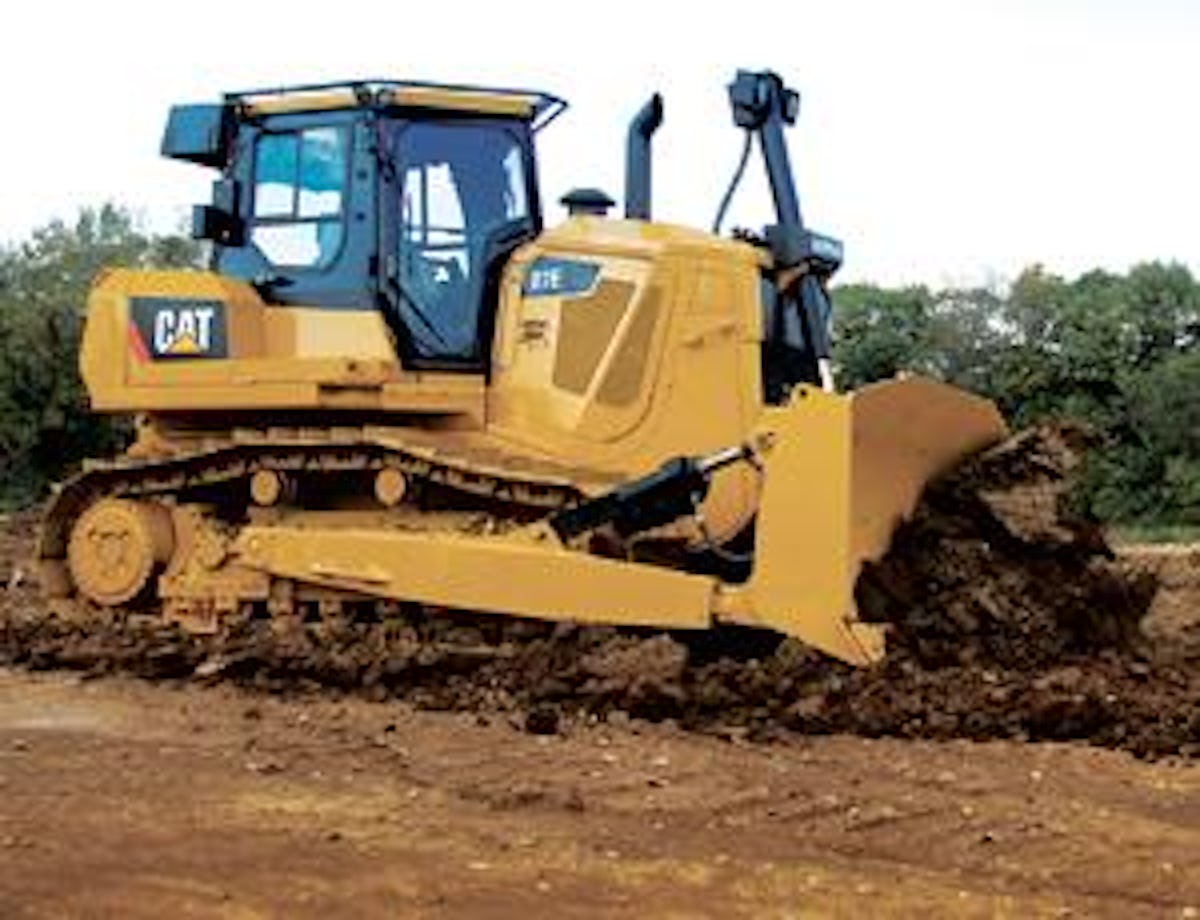 There are several options here. Some heavy electric vehicles use diesel electric powertrains reminiscent of those in locomotives and large ships and some use a design more similar to the power train of a hybrid bus. Already some buses are bedecked with solar cells. On the other hand, hydraulic hybrids are similar to electric hybrids, but they store energy captured from braking not in batteries but in hydraulic fluid. The "accumulator" for the hydraulics stores compressed fluid which when released powers a hydraulic motor to provide power to the wheels of the vehicles during acceleration. The weight of the fluid is a problem for downsizing to car powertrains, though attempts have been made.
John Kargul, EPA's Director of Technology Transfer points out that hydraulic hybrids are 70% more efficient than traditional Class 6 trucks compared to less than 25% efficiency increase for electric hybrids during a cycle of acceleration to 35 mph and then braking back to zero mph. Manufacturer of these power trains, Eaton Corporation, believes that they are well suited to inner-city delivery or garbage collection trucks where vehicles are frequently starting and stopping. 50% fuel savings are available, according to the EPA. By contrast, Fiat Group, a leader in agricultural and earthmoving vehicles under the New Holland and other banners, is energetically developing electric power trains at Research Center Fiat.

On the other hand, a hybrid electric refrigerated truck can run the compressors for the refrigerated box off battery electricity, reducing idle time, but cannot do the same with hydraulic systems. So called "hotel facilities" and auxiliary power for machines are provided by stationary hybrid military vehicles, even when the engine is not turning. BAE Systems is a leader in these power trains and Afs Trinity Power Corporation has advanced hybrid power systems with fast ultracapacitor storage. Cost reduction is more easily achieved with electric traction. Indeed, KPIT Cummins of India has just announced an affordable hybrid electric conversion for larger vehicles. As a result, Pike Research says the hydraulic hybrids are likely to grow within specific niches (garbage trucks, inner-city delivery trucks, shuttle buses), but will likely find difficulty breaking out of those niches.

Other advances with large hybrid vehicles

Large vehicles have huge areas available for embedded photovoltaics for electricity generation and harvesting vibration and exhaust heat are very attractive too. Work is proceeding apace with printed electronics and electrics and wireless actuators, sensor and even lighting.

At the unique event "Future of Electric Vehicles" in San Jose California December 7-8, electric vehicles by land, sea and air are all covered, with emphasis on future breakthroughs. Nearly all of the leading manufacturers mentioned above will be presenting plus many others from China, Hong Kong, India, Japan, Germany, the UK, Netherlands, Switzerland, the USA and elsewhere. It is a truly international event covering the whole picture and this is reflected in many delegates already signed up from Russia, Japan, Saudi Arabia and other countries across the whole world. Far from being obsessed with cars, the event will cover the other types of land, water and air electric vehicle, military and non-military that make the electric vehicle market double that for electric cars alone. The advanced components, smart skins and composite structures will be useful for all of them: experience needs to be shared. This is particularly attractive to those seeking profitable niches and benchmarks from allied industries.
The events will include a two day conference and exhibition, masterclasses, and tours to local area companies. Hear from many exciting speakers including Fiat, Nissan, NASA, Siemens, and many more. For full details, visit www.IDTechEx.com/evUSA. For more on the topic read, "Electric Vehicles 2010-2020" (www.IDTechEx.com/ev) and attend Future of Electric Vehicles.
For more read : Energy Harvesting and Storage for Electronic Devices 2010-2020
and attend Energy Harvesting & Storage and Wireless Networks & RTLS USA 2010