What aircraft do first, cars do next, from adopting disk brakes to fly-by-wire replacing the weight of mechanical links. Next will come fly-by-wireless, where actuators and so on are instructed and monitored without wires by using remote signalling and the whole vehicle is monitored remotely by wireless. Already some airliners move beyond the black box flight recorder, that is all too often lost in an accident, by adding frequent recording of the status of the equipment on the plane using wireless to and from the ground.
Wireless to and from the vehicle
Something similar is already being tested with cars. BMW has been looking at wireless monitoring of electric car batteries, by the service station, to allow the driver to be alerted to the need for service. As aims to advance its lithium-ion battery systems for plug-in hybrid and electric vehicles, has gone wireless. Ford is leveraging the internet and wireless technology to test and refine the management of the battery systems on its pure electric and hybrid road vehicles. Engineers collect real-time performance data from batteries in the laboratory and vehicles in the field using an internet server while wirelessly updating system software to manage thermal load. The objective is to maximise energy capacity, power capabilities and lifecycle durability.
These methods have helped Ford to reduce test-fleet downtime and double the testing capability of its battery laboratory. System specific engineers are informed via email whenever software update opportunities occur, using an adaptive event monitoring procedure that detects conditions of interest and collects relevant data. This system rapidly led to twenty major design improvements in its vehicles, reports Ford.
Ford is will introduce two all-electric vehicles - the Transit Connect Electric in North America in late 2010 and in Europe in 2011 and the Ford Focus Electric in North America in 2011 and Europe in 2012. It also plans to introduce two hybrid electric vehicles and a plug-in hybrid electric vehicle in 2012 and 2013. With the batteries being the largest component of cost and having the largest influence on performance, improved battery system design and management are key.

Wireless within the vehicle

Legacy thinking tells us to replace the large internal combustion engine and fuel tank with an equally bulky central battery and electric motor in an electric vehicle. However, a back-to-basics redesign can lead us to have electric motors in the wheels of an electric aircraft for takeoff and regenerative braking on landing. Indeed, nearly two hundred years ago, Faraday was right to design the first electric motor as flat and, in 1900, several car manufacturers were right to have pancake motors in the wheels of their electric cars. In wheel motors are now coming back in many electric on-road vehicles, initially as "fly-by-wire". With the motors but also with many accessories and safety systems, "fly-by-wireless" will be a logical next step, firstly by controlling in wheel motors through the air then by sending power to them wirelessly.

At the unique IDTechEx event, "Future of Electric Vehicles" in San Jose USA December 7-8, these "sea changes" will be tracked by the experts involved in land, air and, yes, seagoing electric vehicles. Raghu Das, CEO of analysts IDTechEx that is organizing the event says, "We are now at the stage where all electric vehicles are being rethought from the ground up. They will no longer be shoehorned into conventional structures."
T-Ink will show the huge savings in cost, space and weight afforded by printing and laminating instrument clusters and replacing copper wiring by printed base metal - advances greatly welcomes for all forms of electric vehicle.

Professor Shashank Priya of the Center for Energy Harvesting Materials and Systems CEHMS at Virginia Tech has developed mini wind turbines driving WiFi nodes, piezoelectric and other power for sensors and actuators. He will describe "Self-powered Piezoelectric and Piezoresistive Microsensors for Future Vehicles". This even involves high frequency-high power electronic components.
CEHMS addresses an important power source problem with sensor networks, wireless communication and the microelectronics industry. It aims to lead the global research and development in the area of energy harvesting by providing comprehensive expertise in all the related aspects including materials, components, system design, analysis, characterization and prototyping. CEHMS discovers new methods to create electricity and it invents technologies that allow transitioning the prototypes to society. It provides integrated solutions to microelectronics, mobile and wireless technology problems through modeling, analysis, fabrication and demonstration of intelligent systems.

All this will be of great interest to BAE Systems talking about its military and non-military electric vehicles for land, sea and air and NASA scoping the future of electric aircraft including the use of in wheel motors and distributed electronics. PC-Aero announces its new electric aircraft with photovoltaics on the wings as an option. Presenter Lightning Car Company has been considering in wheel motors. Presenters Hawkes Remotes Inc and Hawkes Ocean Technologies respectively cover their unmanned and manned underwater vehicles, many of which tear up the rule book for submarines and "fly" underwater, rising naturally to the surface when motive power is shut down.

The mini turbine range extenders that will be announced by Bladon Jets are small enough for more than one to be deployed at the edges of future vehicles, preserving space. After all, the third generation batteries that will be described by Oxis Energy and PolyPlus may become laminar and distributed to save space, reducing the need for cooling and improving fast charge/discharge.
Professor Pietro Perlo of Fiat Research Centre in Italy will provide details of his latest work on self powered, wirelessly controlled signalling and lighting clusters and the like on road vehicles. Levant Power Systems, a spinoff from Massachusetts Institute of Technology will show great progress with its energy harvesting shock absorbers providing electricity at the extremes of the vehicle. Professor Anna Stefanopoulou, of the US Army Automotive Research Center, will talk on the future of military electric vehicles in this context.
Perhaps the end game for most types of land, sea and air electric vehicles will be having most of the electrics and electronics in the skin of the vehicle. There is work on harvesting the energy of flexure of the skin and Dr Harry Zervos will talk on "Vehicle Integrated Photovoltaics and Infrared Harvesting". That includes the very real prospect of transparent photovoltaics over the whole plane, boat or bus.
Neckar Nymph, the "Deepflight" underwater electric vehicle made by Hawkes Ocean Technologies for Sir Richard Branson this year. 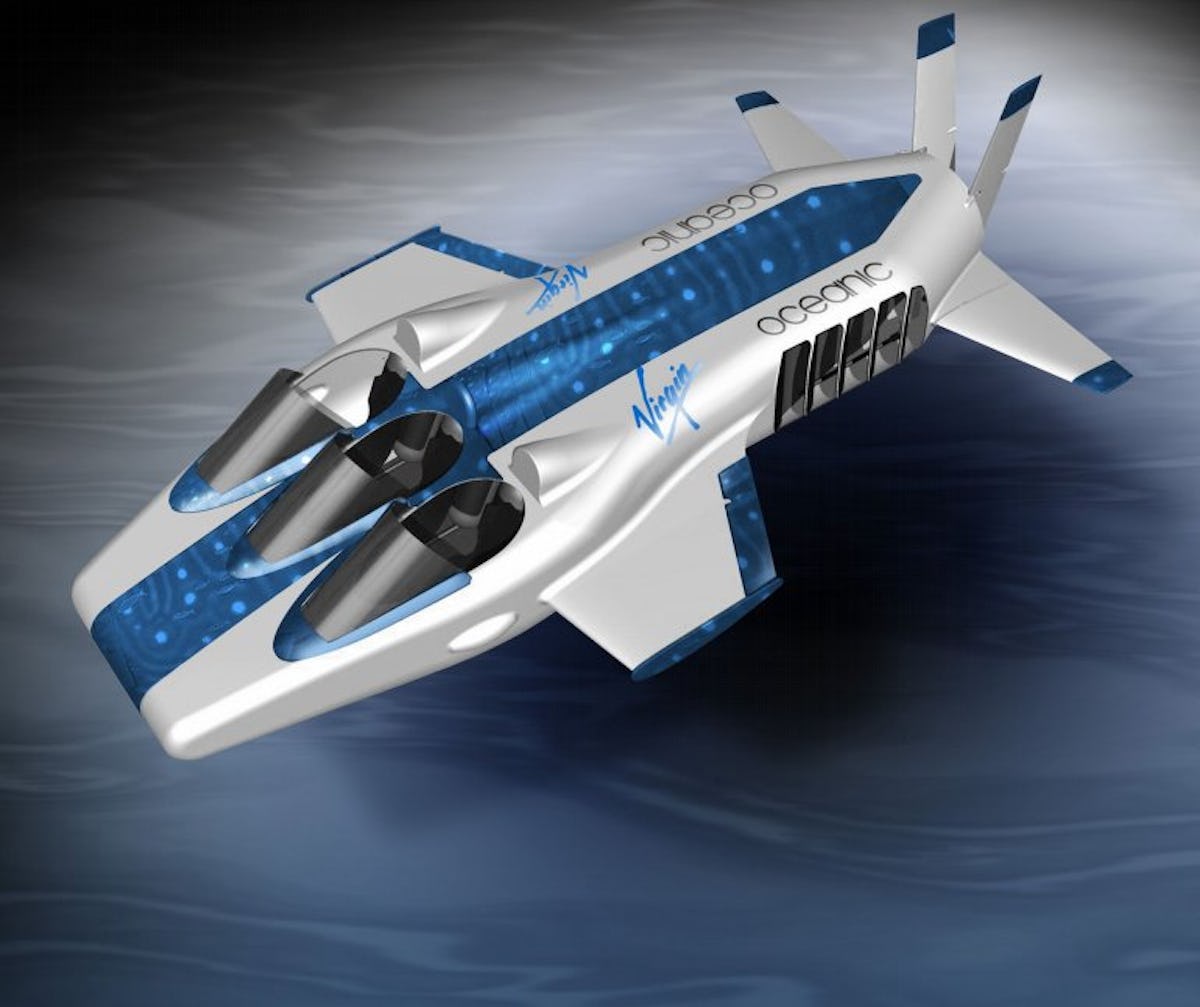 At the event Future of Electric Vehicles in San Jose California December 7-8, electric vehicles by land, sea and air are all covered, with emphasis on future breakthroughs. Nearly all of the leading manufacturers mentioned above will be presenting plus many others from India, Germany, the UK, Switzerland, the USA and elsewhere. It is a truly international event covering the whole picture and this is reflected in many delegates already signed up from Russia, Japan, Saudi Arabia and other countries across the whole world. Far from being obsessed with cars, the event will cover the other types of land, water and air electric vehicle, military and non-military that make the electric vehicle market double that for electric cars alone. The advanced components, smart skins and composite structures will be useful for all of them: experience needs to be shared. This is particularly attractive to those seeking profitable niches and benchmarks from allied industries.
The events will include a two day conference and exhibition, masterclasses, and tours to local area companies. Hear from many exciting speakers including Fiat, Nissan, NASA, Siemens, and many more. For full details, visit www.IDTechEx.com/evUSA. For more on the topic read, Electric Vehicles 2010-2020 (www.IDTechEx.com/ev) and attend Future of Electric Vehicles.
For more information on the events, or to become a media partner, please contact Cara Van Heest at c.vanheest@IDTechEx.com.
Top image: Gas2.0
For more read : Energy Harvesting and Storage for Electronic Devices 2010-2020
and attend Energy Harvesting & Storage and Wireless Networks & RTLS USA 2010