This article shares some of the surprises revealed by our research for the new IDTechEx report "Electric Vehicle Charging Infrastructure 2011-2021". Only half of the money spent in the next ten years on electric vehicles, hybrid and pure electric, will be on cars. The electric car business is hugely competitive, whereas there is less competition and premium pricing in most of the other forms of electric vehicle and their components. This involves vehicles for land, water and air, the full picture being covered by the unique conference Future of Electric Vehicles in San Jose California December 7-8. See www.idtechex.com/evUSA.
About $2.3 billion will be spent on plug in charging stations at ex factory prices in 2015. However, in contrast to the market for the vehicles, the market for their charging stations is greatly dominated by car versions. Cars are usually sold one at a time, with most sales of the increasingly popular plug-in versions triggering supply of a charging station. Indeed, the first 3000 Nissan Leaf pure electric cars come with free charging stations as will the first 4500 Chevrolet Volt plug in hybrid cars. On the other hand, a company buying one electric van and then some more, may find that one charger is enough for all of them. Admittedly, some forklift fleets intensively use lead acid battery chargers but lithium-ion batteries and fast charging are just starting to be offered for forklifts by Linde, Nissan and others and you do not need a charging station for every one of those.
The non-car charging station business will peak in numbers in 2019 and value in 2017. There are several reasons. Innovation is slower with cars whereas a Suzuki electric motorcycle in Japan is already charged by an on board fuel cell. DesignLine electric buses in New Zealand are charged by on board Capstone turbines. Batteries with longer range reduce the need for charging stations. For example, lithium sulfur batteries have succeeded in pure electric manned aircraft and military electric vehicles. A much larger battery is often affordable giving longer range, also reducing the need for charging stations. Massive 400kWh battery packs have appeared in military and marine vehicles.
There are other reasons why few charging stations are needed beyond cars. Whereas the rarely seen solar panel on an electric car may increase range by three miles or so and regenerative braking increases the range by something more, the many other forms of energy harvesting appearing on other electric vehicles pack more punch. For example, energy harvesting shock absorbers on a truck can each generate one kilowatt, enough to power a bar fire glowing red. Indeed, many pure electric autonomous underwater vehicles have no charging station because they stay at sea for years by rising to the surface to garner solar and wave power when needed. Although heavy industrial electric vehicles will see strong growth over the next decade, as detailed in our report, "Electric Vehicles 2011-2021", it will take place in the the outdoors for earthmoving etc where there will be nowhere to plug in most of the time. These Caterpillar hybrid electric bulldozers, Hyundai heavy outdoor forklifts and similar vehicles from Fiat Group subsidiary CNH Global which is the third largest manufacturer of construction equipment and number two in agricultural equipment in the world are hybrids with no charging station. They are going hybrid to improve performance and fuel economy as are tugs pulling large ships- fast growth in sales of electric vehicles without need for charging stations.
Global demand for charging stations using contacts to the vehicle will quintuple in the next decade to reach over $20 billion including installation. Ex factory prices for the hardware will be about one quarter of this but all the figures are depressed by very low prices in China where much of the demand will occur. China is building 50% of the world's new accommodation today and we forecast that it will buy about 50% of the world's electric buses (hybrid and pure electric) in 2021. Indeed, East Asia takes 40% of the EV charging station market by value in 2021.
Pure electric cars and, in later years, a larger number of plug in hybrid cars drive the charger market. Those seeking high margin niche applications will find plenty of opportunity elsewhere, notably in industrial, commercial, military and marine applications.
There are wild cards as well. Governments, including local governments, hugely subsidise introduction of public charging points. The Chinese government is spending $5 billion on over 500,000 public chargers because most Chinese people live in apartments. With their 100 million electric bicycles, they take the battery or the whole bicycle to their apartment to charge it. That is not possible with an electric car, so the 100 or so Chinese manufacturers of pure electric cars fail to sell many as yet. In most other countries, residential chargers will make up most of the market. Unfortunately, premature withdrawal of financial support can make all these car markets collapse.

Charging stations but not as we know them

We do not include the big visions in our forecasts at this stage. There are dreams of a high speed Solar Bullet train in Arizona with solar roof over the entire track costing billions. We have studied Alpha Energy, Beautiful Earth, Envision Solar, E-Move, EVFuture, Sanyo, Solar Unity, SunPods, Toyota and others that have successfully installed solar EV charging stations - no dream about that and they are in our figures.
There is an idea to put contactless charging in the surface of the M25 around Europe's largest city - London - perhaps generating a one billion dollar level of charger business but it is too speculative to put in our figures as yet. By contrast, Hino Motors, KAIST, Delphi with WiTricity, Evatran, HaloIPT, Nissan and others that we profile have demonstrated impressive contactless charging for EVs on a more modest scale: they will grow the market, trumpeting superior safety and convenience. This wastes some power but resonant transfer is an improvement.
However, the standards committees are concentrating on cables with contacts at the end, with Europe the laggard. The European Commission and European standards organisations hope for a common interface in general use by 2017. Quixotically, they hope their standards will become global despite the fact that North America, China and Japan are showing more urgency, already pushing for their standards to be adopted globally. Nonetheless, there are no agreed and adopted standards anywhere for the fastest "Level 3" form of charging - top request for public places. If Level 3 can be made safe and affordable, charging some EVs in ten minutes is possible if they have the right type of lithium-ion battery. Fastest charging means expensive hardware and installation at present, often with a large lithium-ion battery and ultracapacitor bank in the charger. Copying the 40MW delivery of a gasoline station is not necessarily feasible, safe or affordable yet. Our forecast of the 2015 split between options is shown below. Discrete Level 1 stations will be modest in number because so many EVs will be charged slowly using a regular domestic power socket, the inverter being in the vehicle itself.
Percentage split in numbers of EV charging stations sold worldwide in 2015.
Level 1: 6%
Level 2: 80%
Level 3: 14%
Source IDTechEx report "Electric Vehicle Charging Infrastructure 2011-2021"
An alternative would be $500,000 battery swapping stations, some taking only one minute, at least for standardised taxi and bus fleets. These are substantial opportunities for companies such as Better Place. For example, we give below our projection for electric taxis.
Global market hybrid and pure electric taxis 2011-2018 in number thousands. 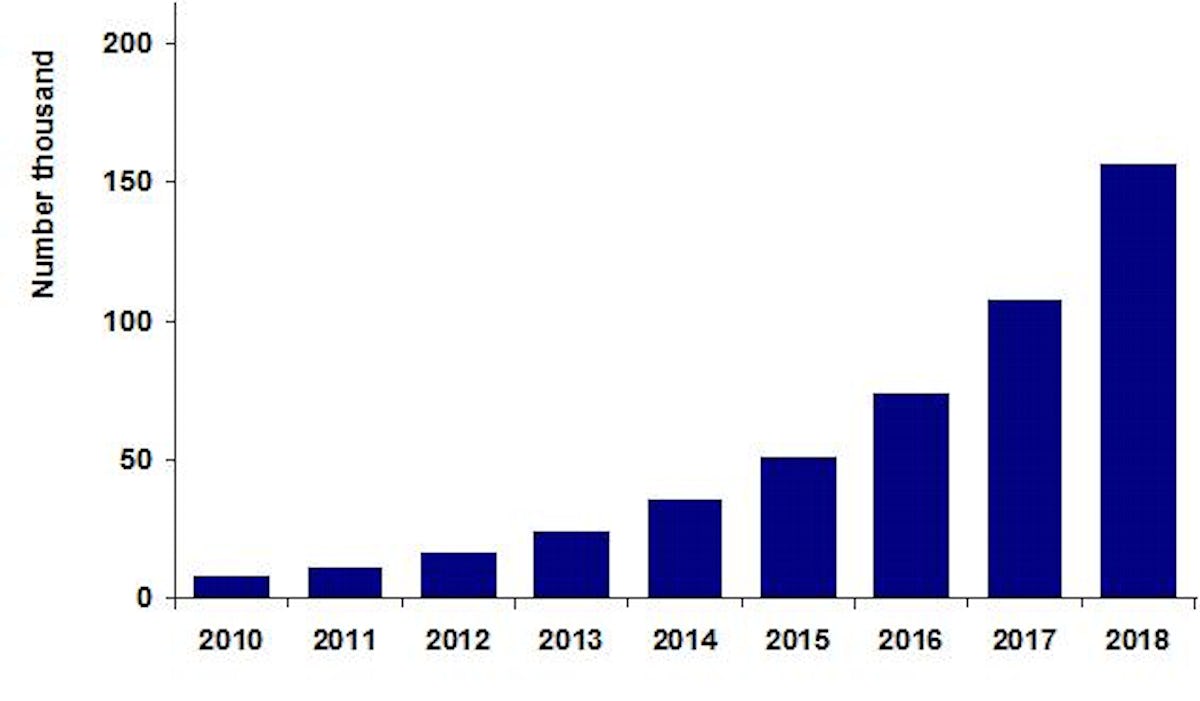 Source: IDTechEx report "Electric Buses and Taxis 2011-2021"
We are not so sure about battery swapping for mainstream cars because there is a lack of interest in standardising their battery shape, fitment and interconnects and worry about quite what you are being given in place of your shiny new $10,000 battery. Rental may solve it.
For more read : Energy Harvesting and Storage for Electronic Devices 2010-2020