Samsung Electronics of South Korea had approximately $132 billion in sales in 2010 and it is prioritising printed electronics for the future, its commitment extending to making its required materials, production machines and components and manufacturing complete products based on this new and versatile technology.
Panasonic of Japan, a company of similar size, is also seeking to deploy electronic printing much more widely. It is seen as an enabling technology that is already cost reducing their electronic and electrical products. Today's examples include the filter and liquid crystal layers in LCDs and of course antennas, flexible keyboards and so on.
Inkjet printing is being rapidly deployed for printing electrodes on solar cells, where non-contact deposition is desired because the ever thinning solar cells become more fragile. In the future, we have the prospect of flexible colour e-readers and television sets and even the printing of large lithium-ion traction batteries for the booming electric vehicle market. This is therefore as much about electrics as electronics and we only call it printed electronics for brevity.

The roadmaps were wrong

Earlier roadmaps for printed electronics have been almost entirely erroneous. It is not primarily about cost reduction, nor is there a trend towards organic versions taking over most applications. It is no longer focussed mainly on improving existing products. It targets doing what was previously impossible to create radically different consumer propositions.
For example Nokia of Finland is about to make announcements concerning its work on stretchable printed electronics. Consumer goods companies see a next level of retailing involving far more noticeable, appealing and informative human interfaces provided by printed electronics. These will appeal to more of the human senses. Examples include Mars Inc., the world's largest pet food company, which is also a leader in human foods, and Metro Group of Germany is one of the largest supermarket chains in the world.
A new ten year road map reflecting some of the recent changes of direction with printed electronic materials, components, circuits and resulting products is shown below. For clarity, only a few of the changes of direction and new targets and timelines are shown as the market heads for over $55 billion in 2020.
A new ten year road map for printed electronics reflecting some of the recent changes of direction with the materials, components, circuits and resulting products. 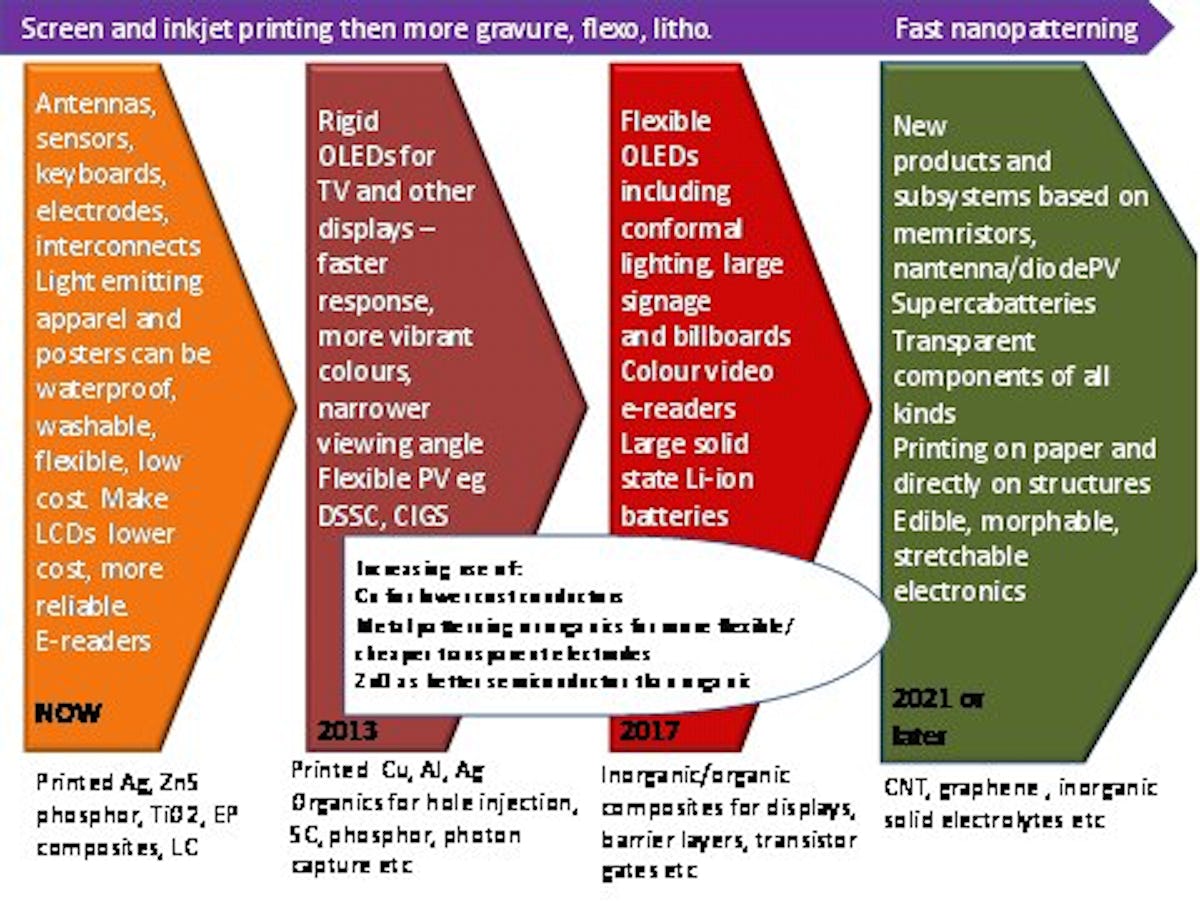 Source" IDTechEx Report "Printed, Organic & Flexible Electronics Forecasts, Players & Opportunities 2011-2021" http://www.IDTechEx.com/pe
In Germany, Platingtech and Future Shape are seeing huge interest in their smart textiles and apparel created with printed electronics while T-Ink in the USA is using it to radically reduce the weight and cost and increase space in the new electric cars, having already had great success with printed electronic toys and novelties. Indeed, T-Ink has some groundbreaking propositions for consumer goods as have Flexible Electronics Concepts and Novalia in the UK. Soligie in the USA has an impressively expanding repertoire of high volume production capability to meet the required output and price points with these.
On different tack, outdoor promotions leader JC Decaux in France is eager to see the large area deployment of moving colour, sound and so on in billboards posters and the like.

Many users are developers now

It is little wonder that some large organisations are now both developers and users of printed electronics, including the US Army, which sees scope for radically new components made possible with printed electronics. That even includes printing energy harvesting layers such as the VirginiaTechCEHMS piezoelectric layers that convert movement into electricity.

In the new world of multilayer electronic printing it is best not to worry too much about where electronics begins and electrics ends: they are merging. However, making basic building blocks such as timers and energy harvesting with storage will be important.
Consider the European FACESS project depositing a complete photovoltaic, power conversion and storage unit on a single plastic film. The Bayer of Germany breakthrough in combining "fidelity haptics" and light management with their polycarbonate film is also relevant here. DuPont Teijin of the USA is leader in the specialist polyester films used in other printed electronics.

Many developers in East Asia now see organic transistors improving in cost and performance too slowly to be the best solution for many high frequency circuits in consumer goods. For display backplanes, zinc oxide based semiconductors such as InGaZnO are prioritised for commercialisation about two years after organic ones.
A precursor of this was the 40 inch inkjet printed OLED television using RF sputtered zinc oxide backplane transistors that Samsung demonstrated last year. The printed manganese dioxide zinc batteries from Blue Spark are being successfully incorporated into other printing processes.
On the other hand, Samsung now has the world's first 4.8 inch full colour active matrix PDLC display driven by printed organic transistors on a plastic substrate. Indeed, Thinfilm of Norway is well ahead with printed memory by depositing superior organic ferroelectrics and progressing to complete circuits.
The introduction of printable copper by several companies last year, including NovaCentrix and intinsiq, has led to a race to replace silver inks, with their price hikes, in some applications such as antennas and transistor electrodes and interconnects. The alternative approach of using less silver by applying nano silver inks is also gaining traction.
Much further down the line are CNT, graphene and other conductors and semiconductors offering even better performance. Meanwhile, Heraeus is leader in organic transparent conductive inks and allied products with its Clevios brand.

As for deposition, screen and inkjet printing are the most widely deployed for printed electronics but flexo and gravure and occasionally fast letterpress are now encountered. Sometimes, using regular printing machines with minimal modification is in prospect. For example, organic photovoltaics and OLEDs are relatively straightforward to print but they need very good barrier sealants against oxygen and water ingress. Fortunately companies such as Henkel have new advances in this area.

So how can one learn more about this tsunami wave of progress and meet the key people? The answer is simple. All the above companies are presenting or exhibiting at the world's leading event on the subject "Printed Electronics Europe" in Düsseldorf Germany on April 5-6 http://www.IDTechEx.com/peEurope.
Add to that five presentations on printing electronics onto paper, for instance, and a large number on the new flexible photovoltaics. There will be optional masterclasses and visits to centres of excellence in the subject on the day before and the day after the two day conference and exhibition. With an awards dinner and many other opportunities to network, free information and working samples, the event will be even more unmissable this year.
For more attend: Printed Electronics Europe 2011.