Highlights of the presentations at the Flextech conference in Phoenix included talks from General Electric, Bayer, Plextronics and Sumitomo.

Bernd Steinhilber presented on the core competencies of Bayer: Inventors of the aspirin, polyurethanes and polycarbonates, Bayer are a materials company with a variety of products and target markets. In the printed electronics space, Bayer supplies temperature resistant films, high barrier films with performance between 10-4 and 10-5 g/sq.m.day and is also actively involved in developing electroactive polymers (mainly through Artificial Muscle arm, a company acquired in 2010) as well as holographic polymers.
Applications include back molded films, light functionality on scratch and chemical resistant hard coatings, capacitive switches and printed antennas in assembled structure. According to Bernd, one of the main goals at Bayer is the achievement of integration of all functionalities in one printed device. 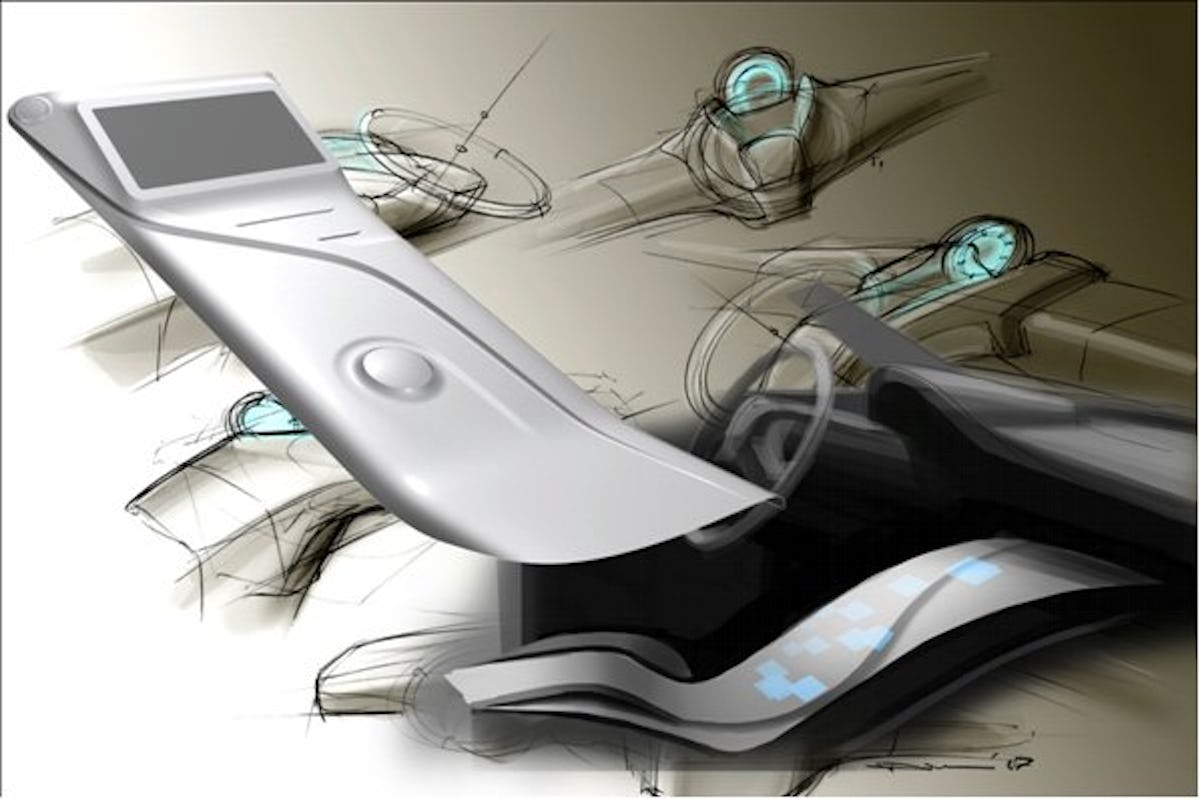 The XXL Centrestack Prototype
Source: Bayer
A couple of really interesting demonstrators of the technology include the XXL centrestack showcased at the K Fair in Dusseldorf in 2010, with printed capacitive switches with haptic feedback response, as well as the new Bayfol Reflex™ actuator technology incorporating haptics into the new iPod case from Mophie that will be launched in March 2011.

Jeff Ashe opened his presentation with a very interesting quote about innovative technologies and the difficulty for some to become more pervasive in some sectors than others: "Cool sells iPods and sports cars, but it doesn't necessarily sell medical devices", he said, describing the slow progress towards adopting new technologies in the medical sector.
He focused his talk on efforts towards making physiological monitoring more portable. Many novel techniques and demonstration prototypes have been developed to address form factor and functional requirements. However, device cost still remains a challenge for healthcare adoption. An interesting example for this was the bedside monitor, at a cost of approximately US$5,000. An average usage over 5 years and an average time spent on it per patient at about 5 days leads to a daily cost of $13.69. That is the kind of price-point that single use, individual portable monitoring systems would need to hit in order to displace the bedside type of system.
He also made a point of how important an integrated approach is: market impact would be achievable only if adequate device infrastructure is available, a whole system is necessary for a new device eco-system to become pervasive. He also pointed out the importance of collaboration between device and component manufacturers in order to achieve this, and the continuous need for low cost integration in order to leverage the benefits of truly heterogeneous integration.

Toshihiro Ohnishi from Sumitomo described their efforts in materials developments, focusing on active materials for organic photovoltaics. The company has achieved efficiencies of up to 7.7% in house, with polymer/PCBM solar cells and is hard at work trying to develop low band gap polymers that could harvest a wider part of the solar spectrum than current materials.
In his presentation he also focused on the importance of solvents during processing, highlighting how different solvents lead to different phase separation that leads to different I-V curves: As described through Sumitomo's work, ideal solvents where the ones that lead to an intermediate type of texture, i.e. not too large domains (too little interfacial length that limits the amount of carrier separation sites) and not too small ones either (very high interfacial length but increased probability for island-type domains that trap carriers and don't allow for transport to electrodes.

Mary Boone from Plextronics focused her talk on an entirely different topic, a study of the IP situation in the field of printed, flexible electronics. With Asian based companies filing patents at a rate 5-8 times higher than the USA or Europe, along with a lot of investment and buy outs of western companies from East Asian ones, it is apparent that the USA and Europe are being outspent in printed electronics.
Government backing in countries like Taiwan, Korea and Japan is a very important tool in supporting the growth of the industry. In addition to that, the need for programs focused on technology integration, manufacturing and innovation is very important in order to ensure that the USA and Europe are not left behind.
For more attend: Printed Electronics Europe 2011.