This article shares some of the research carried out for the new IDTechEx report Electric Vehicles for Military, Police and Security 2011-2021 . Electric vehicles from Daimler AG, Tata Motors Europe, the University of Michigan, Polaris Industries, Alke and others are appearing for military, security and police purposes that are on land, on and in the sea and airborne. They have some common features such as demanding specifications. However, military electric vehicles are frequently born electric, being designed for a specific military purpose from the ground up. Police vehicles are usually adapted regular vehicles and security vehicles are somewhere in between. From a few percent of the money spent on electric vehicles today, these categories, taken together, will be responsible for about 15% of the value market for electric vehicles in ten years time, meaning a significant tens of billions of dollars in 2021. Most of that will be military as these purchasers have more to spend and more reasons to spend it on electric vehicles, both hybrid and pure electric.
In our statistics, we exclude regular military submarines such as nuclear-electric and diesel-electric and large diesel military ships with these drive trains because they are not usually referred to as electric vehicles and they have little in common with the newer, usually smaller vehicles with hybrid and pure electric drive trains employing substantial traction batteries. We exclude diesel electric railway trains and other tethered vehicles ie on rails or attached by cable. Although we discuss many regular non military EVs being bought by military forces, from cars to Ground Support Equipment GSE, these are not included in our statistics. Penetration of electric drive trains into military, security and police electric vehicles will increase to 40% of appropriate land vehicles over the decade and rather less for the marine and air vehicles, for reasons explained in the report.
The main market drivers are summarised below for the military EV business, land, sea and air, for 2011-2021.
The main market drivers for the military EV business 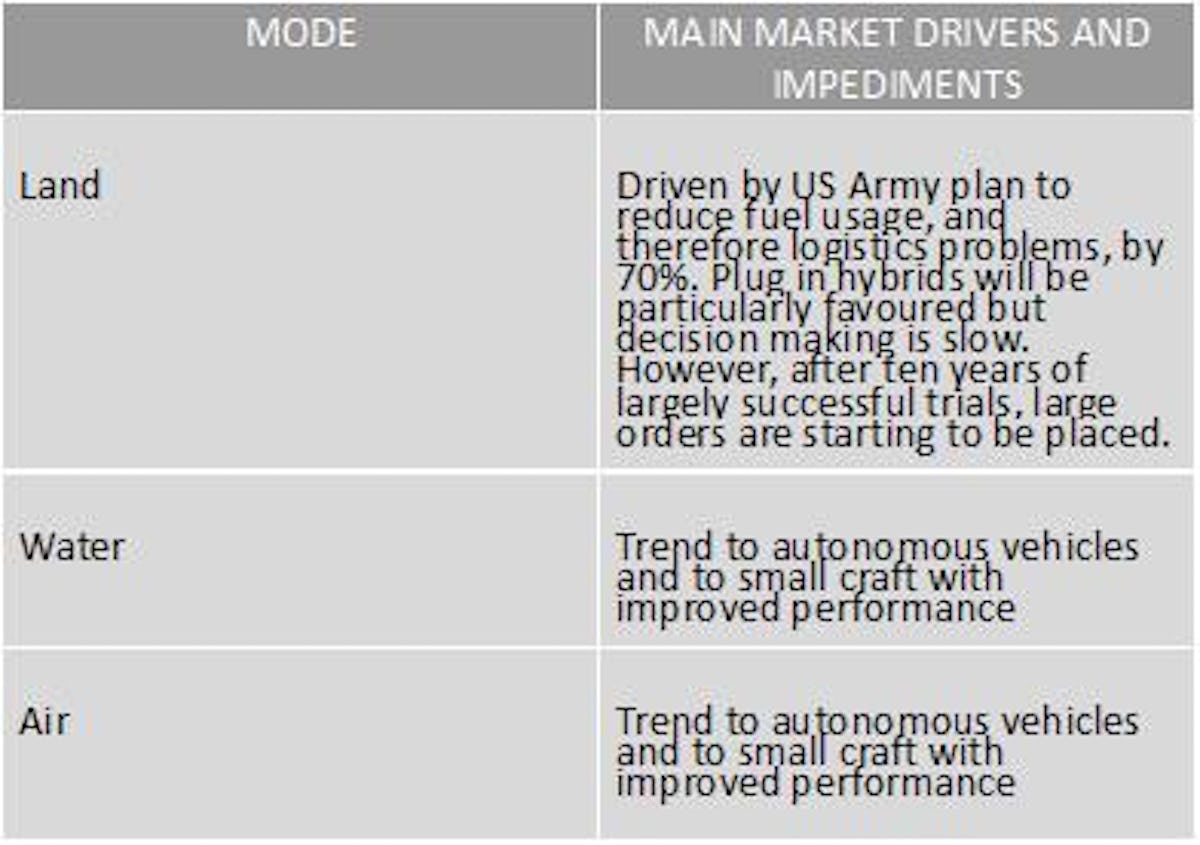 Source: IDTechEx
Another driver is achieving the previously impossible such as surveillance aircraft cruising the upper atmosphere for years without human intervention, silent bomb disposal robots and subsea autonomous vehicles deployed for years without maintenance or other intervention.
The military, security, police sector of electric marine vehicles is declining in percentage of the whole market for marine electric craft despite growing in absolute terms. The opposite is true of land and air vehicles, mainly because of military demand. Marine vehicle growth for these applications will particularly come from conventional small to medium sized boats for coastguard, customs and military uses becoming hybrid electric to save fuel, meet new pollution laws and increase range. It will also come from increased deployment of Autonomous Underwater Vehicles AUVs powered by multi-mode energy harvesting for search and rescue, surveillance and other purposes. In the air, demand will be boosted by increased deployment of solar Unmanned Aerial Vehicles UAVs in the form of airships and planes cruising the upper atmosphere for surveillance at a fraction of the cost of satellites.
In almost all applications, lithium-ion batteries will continue to be favoured for the next decade but with improving chemistries. Supercapacitors will commonly be used to improve fast charge and discharge and multiple forms of energy harvesting will increase range.
Our forecast for military, security and police electric aircraft includes airships - a recent US military order being for $517 million for one military airship will be completed in two years - down to flying insects where tens of millions of dollars are being invested in each of the leading projects such as robot surveillance bats, jellyfish and hummingbirds. Upper atmosphere unmanned aircraft and airships will be entirely powered by lightweight flexible solar cells. As with non-military surface boats, the copper indium gallium diselenide CIGS flexible photovoltaics is particularly favoured but with many alternative technologies coming along.
Our statistics exclude the electrification of aircraft nose wheels to make them independent of GSE on the apron. We expect such electrification to be very significant: the aircraft becomes an electric vehicle when on the ground, including taxiing for takeoff. This will become widespread with military and security aircraft, even the largest ones, because of the reduction in fuel meaning longer range and lower cost and the greater security of movement as the aircraft becomes an independent electric vehicle when taxiing and aligning for takeoff, dispensing with the need for GSE. The quieter use of air strips confers other operational advantages as we await silent all electric landing that is currently being developed to be followed by silent all-electric takeoff.
Our figures show a growth market despite average price erosion caused largely by mix. Mainly this is because there is substantial growth in sale of the relatively low cost small and nano unmanned aerial vehicles in later years.
The following are some of the main enabling technologies that will confer improved cost, safety and performance to land, sea and air military and allied electric vehicles over the next decade.
However, although military vehicles pioneered almost all of the most advanced technologies some years ago, that is no longer the case today and benchmarking with all forms of non-military vehicle is now extremely important. It is also no longer true that most advances first take place in the West for vehicles, including military vehicles, it being necessary to benchmark best practice from New Zealand to India and Canada for example. For example, a New Zealand company was first to deploy turbine range extenders in volume. Although UAVs are widely deployed by Americans and Europeans, Korea will deploy them from 2015. Some of the most advanced military UAVs are deployed by Japan and India. Indeed, Singapore, China and India are among the East Asian countries developing their own military and security land vehicles with electric drives.
The IDTechEx report Electric Vehicles for Military, Police and Security 2011-2021 can be investigated further and ordered via raoul@IDTechEx.com and more can also be learnt by attending Electric Vehicles Land Sea Air in June in Stuttgart, Germany. Never before has there been an opportunity in Europe for people in land, water and air electric vehicles and their components, infrastructure and test equipment to compare notes in one event. Delegates already signed up vary from Airbus, Hudson Power Sports and Hudson Yachts to Sony, the Bulgarian Electric Vehicle Association and Robert Bosch Venture Capital.