S.I.D. is the successful display technology exhibition and conference. It was held last week in Los Angeles and had over 5,000 attendees and it included some aspects relevant to printed and flexible electronics. The show is often a useful gauge of current interest in different display technologies and this year it was evident that the latest focus is on 3D television and touch screen technologies.
Surprisingly, the exhibition was weak on OLED displays and lighting. Samsung, who has arguably committed the most money in OLED manufacture did not preview any on their stand and neither did LG Display. However, both are actively working on the technology. The conference agenda had a great number of presentations on OLED, including TFT backplane work where organic TFTs and transparent metal oxide TFTs are being developed intensively. Speaking at the investors forum, Universal Display Corporation (UDC) announced that they have moved into an operating profit. UDC is a public company and it has recently raised approximately $250 million. When asked what they would do with the cash, the speaker said they would be looking at IP acquisition and look at doing more material layers in the stack. UDC have developed their own encapsulation technology for flexible displays. The company, a materials provider, claims that compared to an active matrix LCD display, using their phosphorescent OLEDs they can reduce the power consumption by up to 50%. 2010 sales were $30.5 million up from $15.8 million in 2009 and Q1 2011 sales are $11 million.
UDC is the only listed pure play OLED company. Merck, Sumitomo, LG, Samsung, Philips, Osram etc are also heavily involved in OLED displays and lighting but OLEDs are only a tiny part of what they currently do. Plextronics and Novaled are two pure play privately held companies developing OLED materials.
Samsung's booth showed the electrowetting display technology they acquired (Liquavista). This is a colour reflective display, requiring continuous refresh. It can show full motion video. The personnel on the stand say products are in the pipeline but would not specify more details. It falls between e-paper and LCD display technology.
E-ink showed some of the many e-readers now available incorporating their bistable displays, including the first colour e-reader from Hanvon. It certainly has been a case of E-ink selling shovels in the gold rush - not only are they by far the number one in e-paper technology but they also license the technology for LCDs that Apple use for displays in its iphones. The company had revenues of approximately $800 million in 2010. Just a short four years ago, before their acquisition by PVI, E ink had sales of less than $50 million and PVI had sales of about $300 million.
Bridgestone also have a bistable display, which they presented on. They are targeting using these as a visitor card, where the badge has no power source - the display is updated using an RF reader at short range. In 2011 Bridgestone will supply 4" and 6" displays as samples and 10" versions in 2012.
Flexible glass from Corning
A huge challenge for flexible OLED displays is having a transparent barrier film that has glass-like barrier qualities and can be cheap enough to enable the dream of low cost displays on many surfaces. There have been significant developments with organic based films for barriers which we have covered in this journal. A new development is from Corning, which uses ultra slim glass - it is slim enough to be flexible. Corning claim it has the same barrier performance in terms of oxygen and vapour transmission to conventional glass. It is truly flexible - our photo below shows the flexible glass being rolled in a loop. It is 100 microns thick and stable up to 400 Degrees Celsius. Corning is continuing to develop the processability of this material with other manufacturing steps. 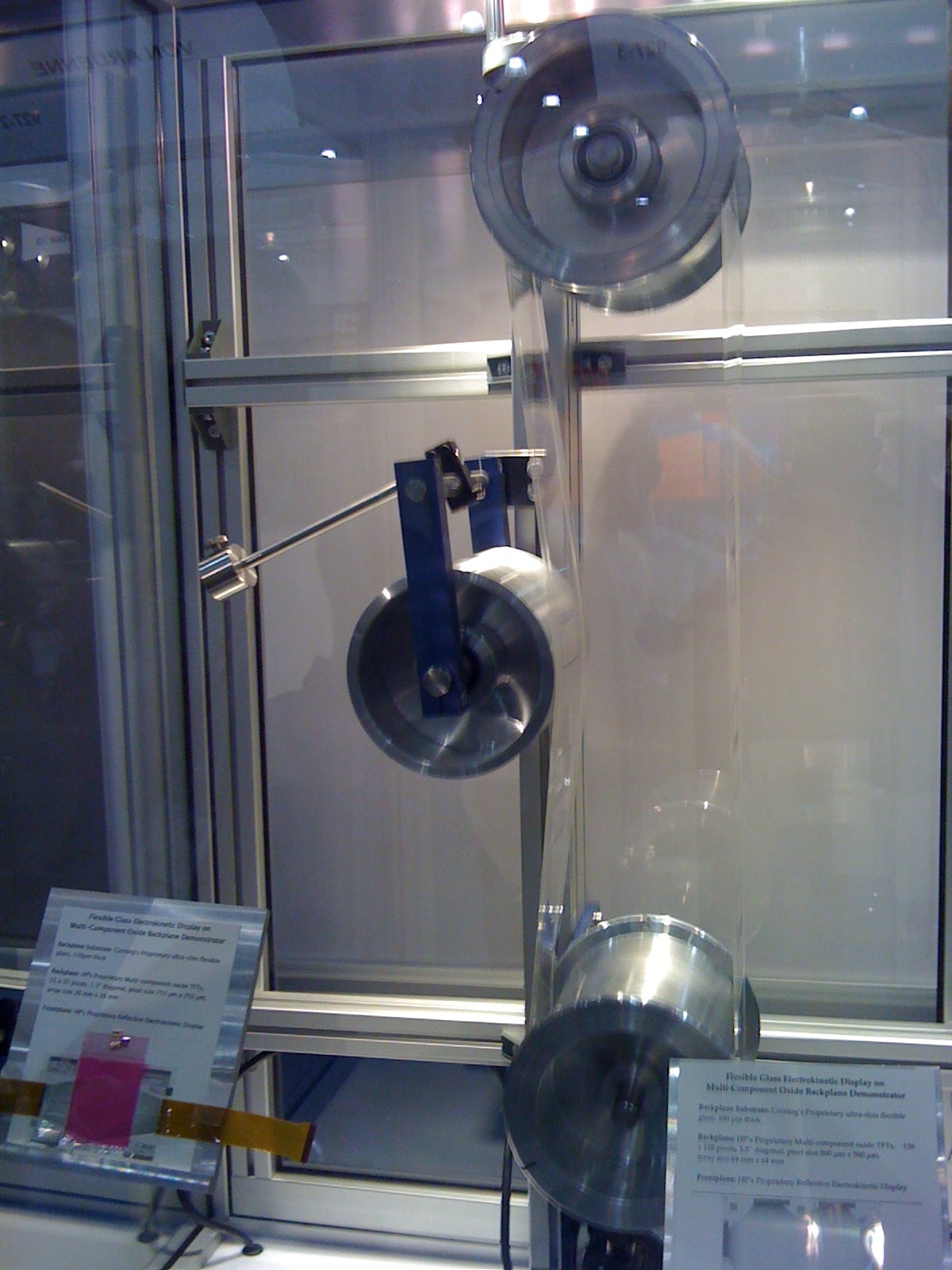 Flexible Loudspeaker
Most electric and electronic components have a large number of organizations working on a printed equivalent. Not so with speakers. There are exciters from companies such as NXT but those are not printed (yet). There are electroactive polymers from BMS and Micro Muscle but these are not targeted to producing audio sound. TEEC of Taiwan presented on their flexible paper-like speakers. Rather than using an electromagnetic force to move a membrane they use an electrostatic force - high voltage, but very low current, resulting in low power consumption in mid and low range frequencies. The nature of the speaker means that it gives a smooth response and low distortion compared to electromagnetic speakers. 3D speakers were shown - including a cylindrical version which emits sound in all directions.
For more attend Printed Electronics and Photovoltaics USA 2011 .