Eileen Tanghal of Applied Ventures opened the conference. Applied Ventures is the venture arm of Applied Materials ($9.5B revenue in 2010) with companies such as Liquavista, Plextronics, Terabarrier, SAGE Electrochromics and Semprius being the most relevant companies backed by funding from Applied Ventures.
It's still an exciting time to invest in displays: Eileen pointed out a 39% CAGR is expected in the next few years for LCDs, 34% from emerging markets (e.g. China, India) and 5% out of mature markets, with smaller replacement times for LCD TVs being a key driver there. Higher resolutions mean that a-Si TFTs can't "cut it" anymore with LTPS and metal oxide transistors being seen as the main potential replacement technologies. And the multitude of new devices (e-book readers, smart phones, tablets) mean that displays still have a lot of potential for growth in them.
OLEDs are also paying off at last, at least in small size displays, with Samsung having a dominant position and market share, having brought yields up to about 90%. According to Eileen, OLEDs have found their first niche market, the mobile phone sector with approximately 1% current penetration and more to come. Getting material efficiency up is the next challenge that needs to be addressed as well as bringing material/manufacturing costs down.
What's the next wave coming? Interactive signage, according to Eileen with investment interests in touch technologies for large area, novel large area displays , smart windows (electrochromic, thermochromic) etc.
An overview of the touchscreen market was given by Jennifer Colgrove of Display search. Revenue was at $4.3B in 2009, jumping 60% to $7.1B in 2010 and forecasted to grow by almost 90% to reach $13.4B in 2011, finally getting up to $23B by 2017. Resistive touch was traditionally the biggest technology until it was surpassed in 2010 by projected capacitive.
In order to understand the growth of projected capacitive, it's easy to look at the 190 suppliers of touch technologies worldwide, 82 of which are projected capacitive companies, whereas there were only 27 in 2009.
Multi touch capability is also a big interest of many suppliers that is pursued by over 70 companies active in the touch sector.
So where is the future for projected capacitive? Sensor-on-cover (using the cover lens as the sensor substrate) or On-Cell (thin and light, best visibility), preferred by manufacturers who can also manufacture displays.
Although projected capacitive is the fastest growing technology, other technologies are growing also, such as optical imaging (Kinect being the biggest succcesful implementation) and infrared for example, successfully going into e-readers (SONY, KOBE, the new Nook, Hanvon). Finger as well as pen touchare gaining momentum and being commercialised. 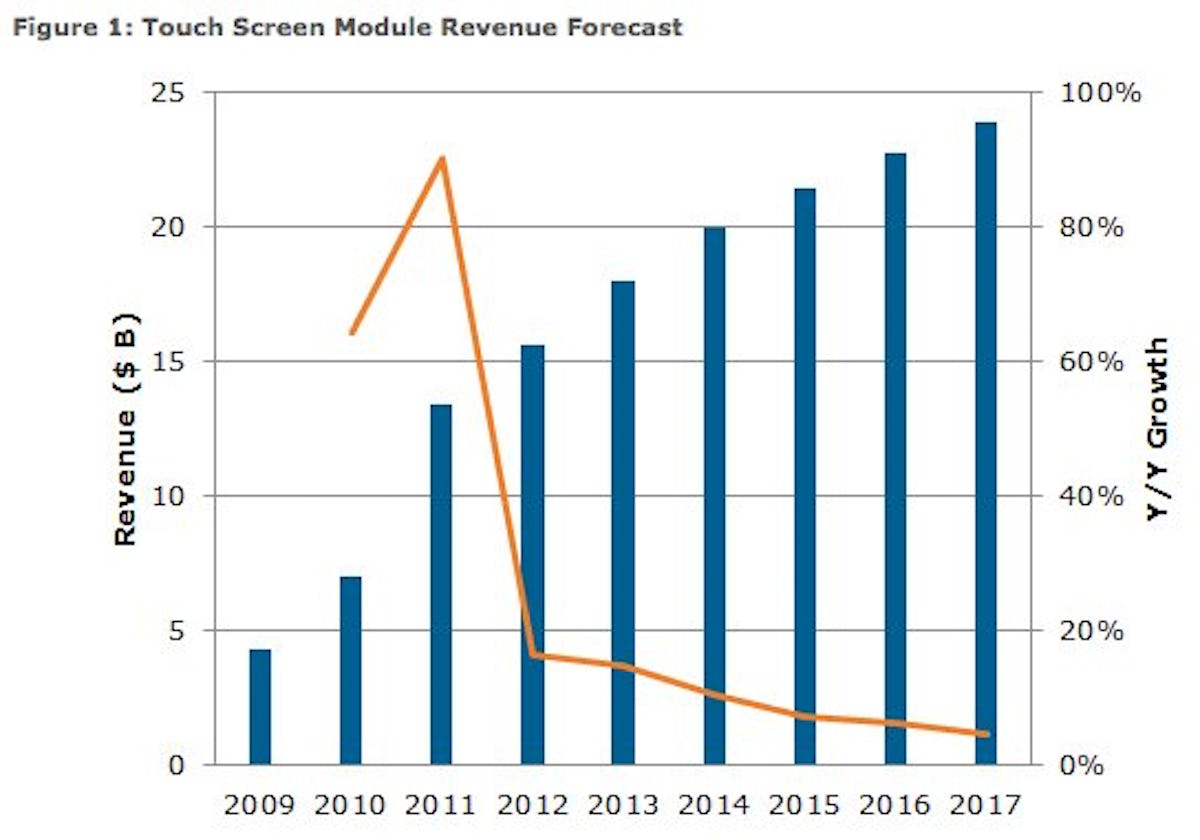 Source: DisplaySearch
Tablets are one of the biggest applications for touch, reaching 70M units in 2011 and over 360M in 2017. Number 1 application in terms of units remains the mobile phone market , with touch functionality penetrating 31.2% of mobile phones in 2010 (almost all smart phones), expected to reach over 60% by 2017.
New opportunities in touch can mainly be found in control ICs and ITO replacement with added growth of glass and software technologies as relating to touch functionality.
Mark Hamblin, CTO of Touch Revolution, a TPK company (a leader in the huge growth of projected capacitive technologies), talked about the company's technology and was a great proponent of projected capacitive over other touch technologies. New opportunities can be found in white goods & appliances, light switches, industrial machines all the way to unexpected applications (tanning beds?). Also, optimizing UIs for existing applications is another growth opportunity, providing added value to OEMs. Achieving compatibility with the rest of the system the touchscreen is integrated onto and increasing the market's experience with the technology, teaching potential adopters to understand touch are some of the challenges for touch developers.
Projected capacitive was also supported by speakers from companies such as Ocular, Atmel and Zytronic (covering larger panel solutions of over 32''), while the rest of the day focused on technologies beyond it. N-trig's DuoSense® solution (with a specific interest in using touch-enabled tablets, using both finger and stylus input, in education), a dual-mode interface powered by a single device, utilizing both pen and projected capacitive multi-touch functionality; Perceptive Pixel's multitouch technology (FTIR, the technology that powered CNN's election coverage in 2008); Touch International working on both projected capacitive as well as resistive touch; as well as Immersion's haptic technology developments.
The possibility of moving touch technologies onto flexible electronics is something that does cross the minds of developers, the extensive use of ITO though is a barrier, due to its brittleness. Rollable, stretchable, bendable form factors will eventually come but it would be necessary to move to transparent conductors other than ITO in order to be able to see further developments in that field.
The day overall made it clear that the vibrant sector of touchscreens has become a vital part of most electronic devices and is bound to become part of several others, utilizing characteristics such as intuitive use and scalability to larger form factors.
For more attend: Printed Electronics USA 2011