Heliatek GmbH is the only company in the organic photovoltaics sector producing modules based on vacuum-deposited small molecules. In mid-2012, their first roll-to-roll production line will start to roll out flexible organic photovoltaic (OPV) modules with an annual capacity of 2-3MWp.
Heliatek
IDTechEx met with Heliatek to get a first-hand technology update and to get a peek of their new manufacturing plant in Dresden, Germany, which will be officially opened in a ceremony on March 12th.
Now in its 6th year, Heliatek is in the process of setting up a 2-3MWp/year roll-to-roll production line for flexible OPV modules. Glass or foil integrated modules with a width of 30cm and a length of 30~120cm are expected to be commercially available in mid-2012. 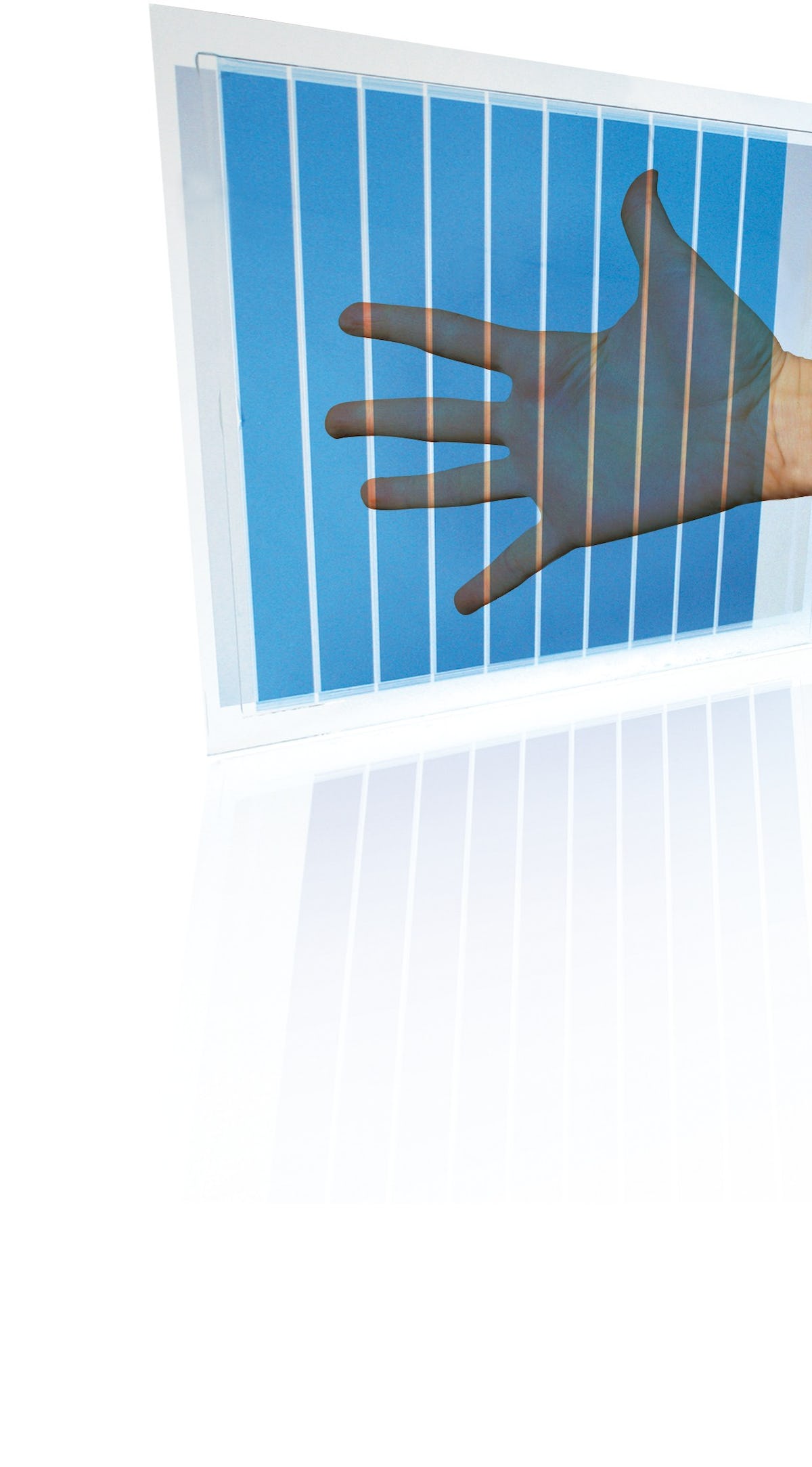 Organic semi-transparent module between glass with ble cells
Module costs are said to be in the range of conventional PV for the same volumes. Targeting a production feed rate of 1-2 m/min will allow for the cost of the product to be largely determined by material costs - only 1 gram organic material used per m².
Heliatek uses a tandem structure based on small molecules for their OPV cells and also develops and synthesises the light capturing molecules in-house. Only one other company in the OPV market also uses small molecules. Mitsubishi is using a solution conversion type OPV and recently announced efficiencies of over 9% for under 1 cm².
In comparison to the solution optimized polymers used here, small molecules experience only minimal losses in large-scale production. This is also backed by the experience of the OLED industry. Heliatek was able to demonstrate in the laboratory that their champion cells experienced no significant loss in efficiency when subjected to over 1,000 hours at 85 °C.
Also, the endurance test, with its intensive white light irradiation, showed that the cells already exhibit the stability necessary for a lifespan of over ten years. In the medium term, Heliatek also considers lifespans of over 20 years.
For their production Heliatek chose the vacuum evaporation method over solution processes and printing, a method that already brought OLED displays a commercial breakthrough. Today, all commercially available OLED displays (Samsung is currently the leader) are based on this concept. According to Heliatek, their vacuum method provides higher efficiencies, longer lifespans, and greater reliability.
The most recent advances in efficiency and lifespan for their semi-transparent cells also back this. End of 2011 their technology once again set a new world record after Fraunhofer ISE CalLab certified a cell efficiency of 9.8 % for a 1.1 cm² tandem cell.
Heliatek's in-house measurements have shown that scaling up the record-breaking cells to a panel with a size factor >120 results in an efficiency over 9 % for the active module area - a loss of only 0.6%.
As the low temperature process allows for the use of inexpensive and lightweight plastic substrate, Heliatek's OPV modules are comparably lightweight with only 0.5kg/m², whereas typical thin-film modules weigh 12kg/m² and conventional crystalline modules weigh 17kg/m².
In terms of applications, Heliatek is focusing on energy-2-go and small off-grid systems (mobile, electronics and leisure & comfort sector) for the business market entry in the next two years with module efficiencies of 5..8%, lifetime of over 5 years and costs slightly off industry average. Building-integrated photovoltaics (BIPV), larger off-grid, automotive and transport applications will be the target for 2015 to 2017 with module efficiencies of greater than 10%, lifetime of over 20 years and costs equal to industry average.
In the long term, Heliatek also sees its OPV cells entering the market with on-roof and large area power plant systems. For this efficiency is expected to rise to over 12% and lifetime to over 25years. 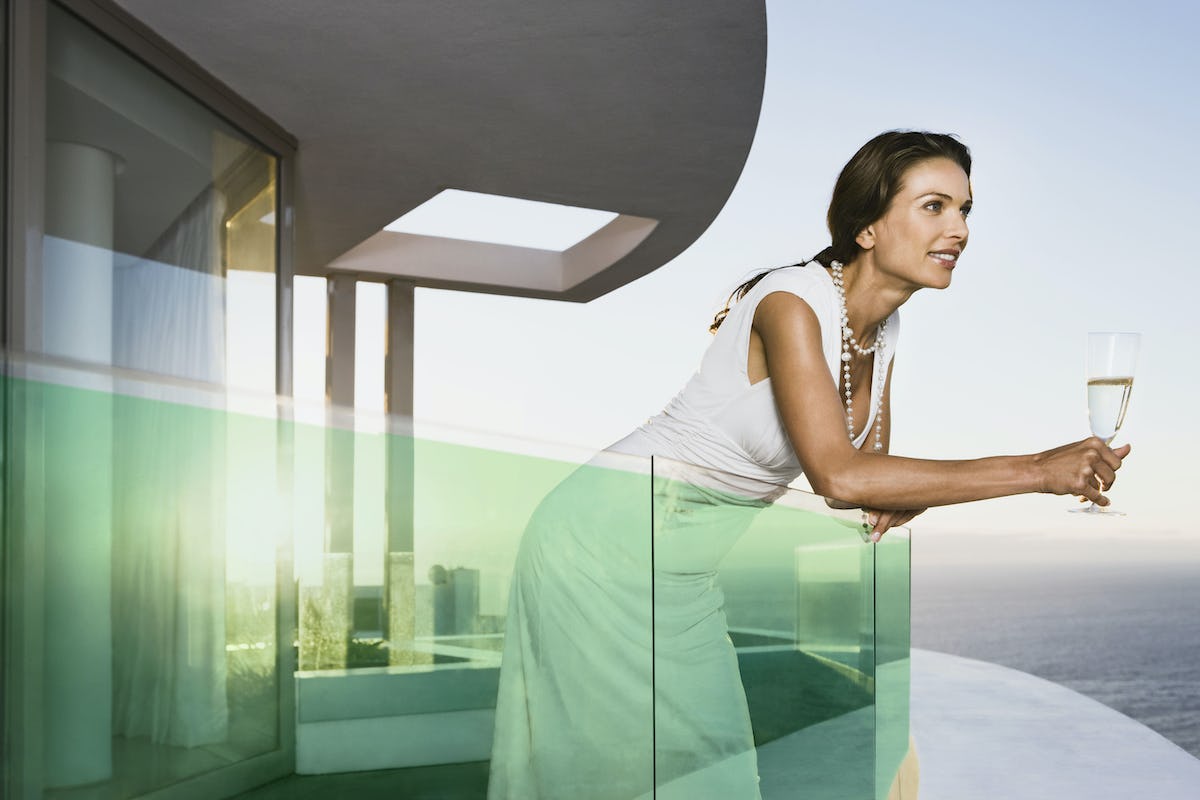 Sample application - semi-transparent organic cells between glass for balcony ballustrade
In order to satisfy the high customer interest and market need, Heliatek is planning a next round of financing for end of 2012. With the targeted 50M Euros the company will build a second production line with an annual capacity of 50MWp.
Dr Martin Pfeiffer, CTO and Co-founder of Heliatek GmbH, will present the latest news on their efficient and stable vacuum-deposited OPV cells and modules at IDTechEx' next leading event in Europe. On April 3-4 IDTechEx is hosting its 8th annual Printed Electronics & Photovoltics Europe event in Berlin, Germany www.PrintedElectronicsEurope.com

.
Samples of Heliatek's semi-transparent and opaque OPV cells and modules will be shown during the tradeshow at Demonstration Street, the world's largest collection of printed, organic and flexible electronics products in one place.
Photovoltaics Europe 2012, part of Printed Electronics Europe 2012, will be shedding light on the latest trends from major innovators in the solar cell sector. The conference will be covering all the developments in thin film, organic and printed photovoltaics, bringing you the latest innovations on established photovoltaics technologies as well as emerging ones.
For more see: Printed Electronics Europe 2012.