Food and Livestock RFID - Where, Why, What Next?

RFID is far from being a new thing in the food and livestock industry. It is widely used, with much more to come thanks to drivers such as:
Some examples of schemes in use are shown below. Pigs are tagged in Thailand and many other countries, with Spain even tagging the hams right through to the retail shelf. Fish are RFID tagged in the millions in Canada and elsewhere for conservation studies and control. In Australia, leading tomato grower Moraitis is tagging its cardboard trays. The US Military has RFID interrogators in its fork lifts which read pallet loads of food as they are lifted and placed. Trucks of food are read along their journey and in yards, large numbers of intermodal ISO containers are located and sorted using beams of high frequency emission, these Real Time Location Systems RTLS being a sophisticated form of RFID involving multiple antennas. By Spring 2006,several hundred million RFID tags had been applied to food and over 70 million to livestock.
Figure 1 Examples of RFID in use on food and livestock 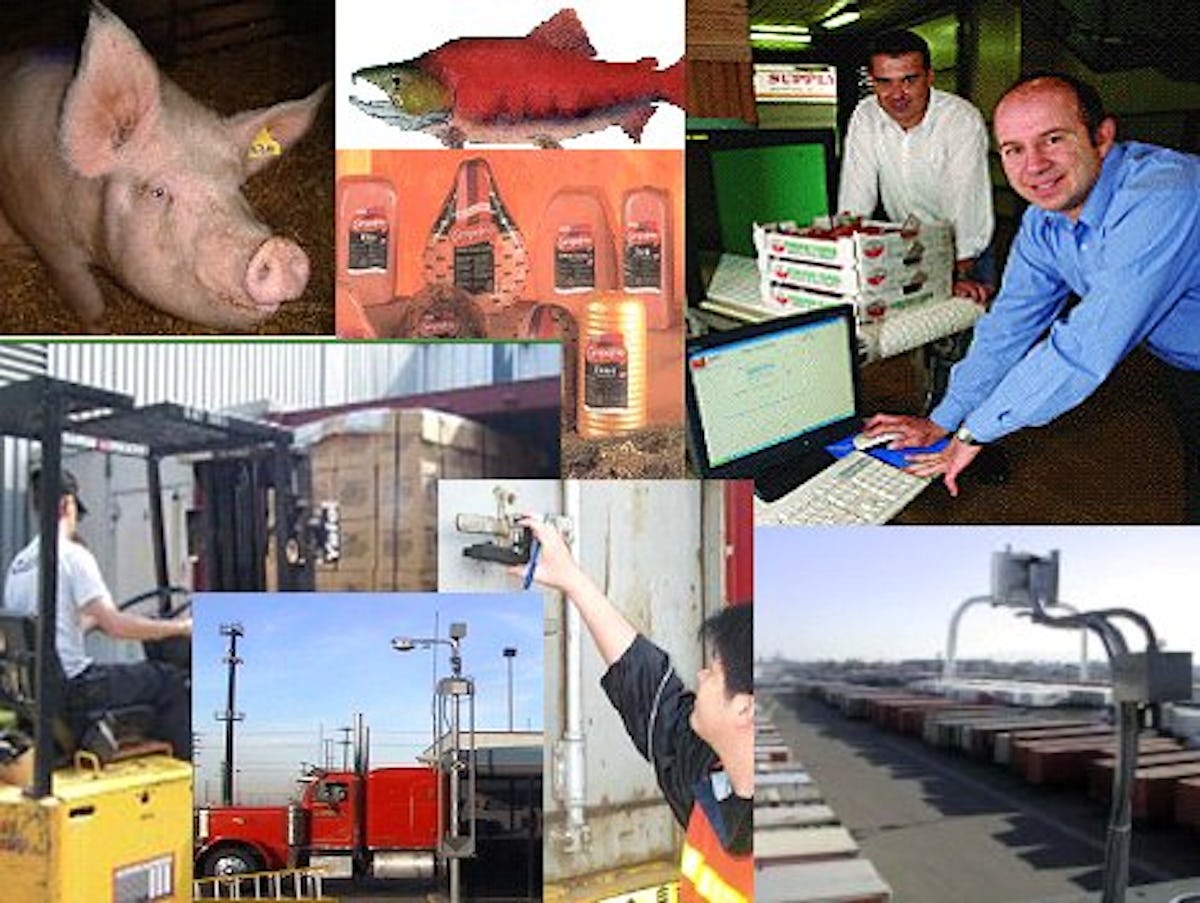 Source: IDTechEx, suppliers and users
Savi Technology has been a major participant in the Smart and Secure Tradelanes initiative against terrorism that also creates operational paybacks. This includes RFID as a major component in tackling the low visibility to security status and location of intermodal ISO container movements. This is a public/ private initiative that is gradually ensuring that an ever higher percentage of the millions of intermodal containers carrying most of the world's trade will have RFID that radio alarms of attempts to enter and gives identification at ranges of 30-100 meters. It was initiated by the Strategic Council of Security Technology SCST and started with 65 partners in 13 ports across the world, 11 tradelanes and 19 shippers. Many thousands of intermodal containers have already been tagged in this way and Hutchison Whampoa has invested $100 million in a joint venture with Savi Technology to rollout the scheme more rapidly now it is proven. On its own, Savi Technology has already tripled its sales over four years to around 125 million dollars from doing such valuable work for the US Military and the SCST.
At the other extreme, we see tracking of sushi meals by RFID for reasons of customer convenience, better stock control and cost reduction in Japanese restaurants. Figure 2 shows Prime Minister of Japan, Junichiro Koizumi, watching this done prior to eating such a meal while an interrogator in the table automatically charges for what is taken.
Figure 2 RFID in sushi used for stock control and autopayment in restaurants. 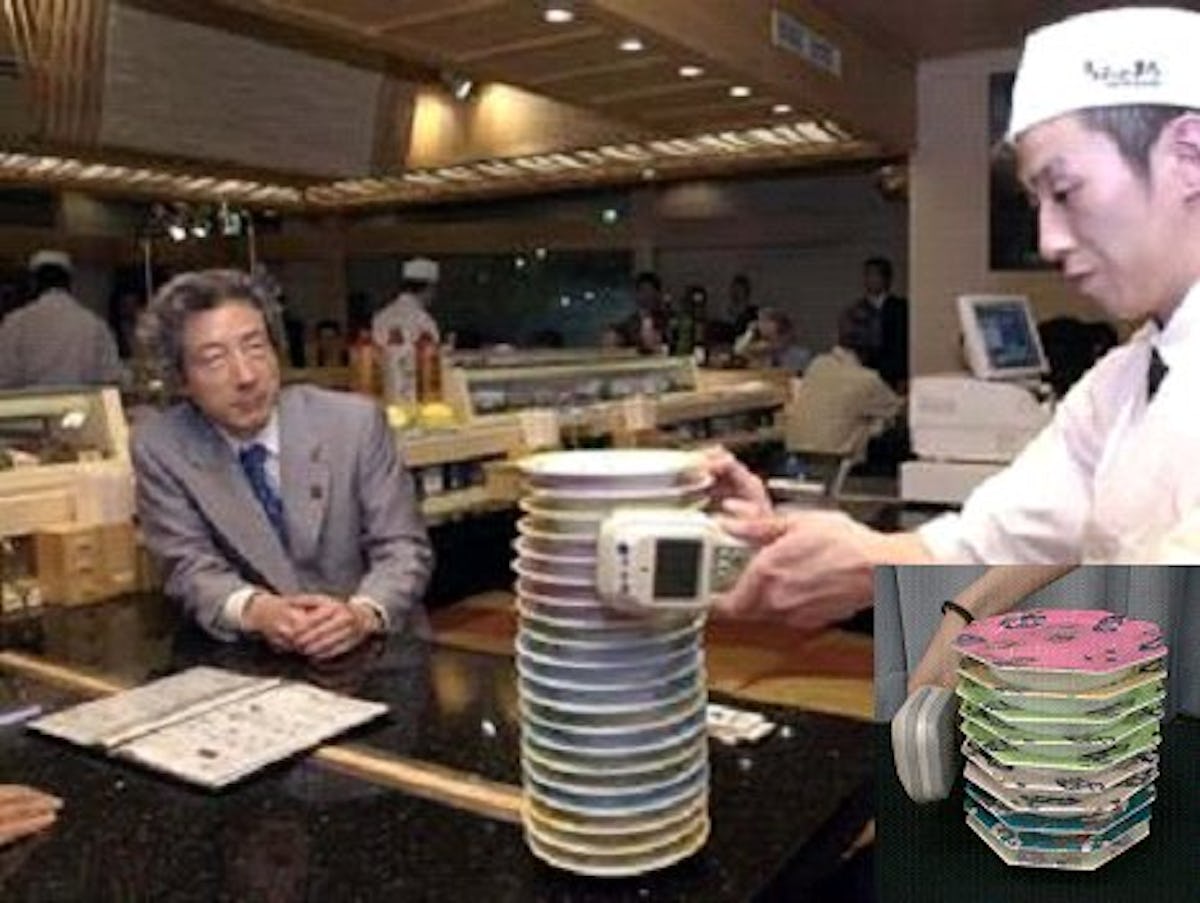 Source: Miyake and Yoshikawa
RFID is used in the food chain for a very wide variety of reasons and in an increasingly varied number of locations. It will become the largest application of RFID and increasingly be seen on vehicles, conveyances and individual items and packages to achieve many different paybacks as well as for benefits that are difficult or impossible to quantify such as security, safety and consumer service and convenience. In the livestock industry RFID is proving to be more useful than previously realized, but there are fewer players involved than with food.
The IDTechEx RFID Knowledgebase is by far the largest searchable database of RFID in action in the world, with over 1800 cases concerning over 1900 organisations and 68 countries. The number of cases is increasing rapidly and it already includes over 335 cases concerning food and livestock RFID, 86% of these concerning food and 14% concerning livestock, albeit with tags costing ten times as much in most cases. This is because the livestock tags usually take the form of ruggedised, biocompatible implants, pellets in the stomach and ear tags whereas food tags are usually in the form of basic labels that are not in contact with the food.
Interestingly, these cases cover a range of countries from the very small and the underdeveloped to the largest most prosperous countries in the world. Often the smallest are in the lead because they are more enterprising, it is easier for them to move fast and they are under the most pressure to be "whiter than white" because the large trading blocs often try hard to keep imports low to protect their own industries.
The food RFID studies cover

Source: IDTechEx
This reflects the mandates in the US by several major retailers and the US Military that all incoming pallets and cases be tagged as soon as the technical challenges are overcome.
The number of livestock case studies is quite different, being split as follows
Figure 4 Number of livestock RFID case studies by country

Source: IDTechEx
This reflects the fact that, for its size, the US is backward in livestock tagging, with a number of trials but few rollouts and only a distant prospect of legal push. By contrast, Australia, Canada and many other countries are strongly progressing RFID tagging of cattle, increasingly with legal push. This is not because it saves money and increases sales for the large supermarkets (as is the case with food) but for disease control, traceability and cost reduction at the beginning of the supply chain. That includes an interest in what is fed to the cattle, as with mad cow disease BSE tracing.
Figure 5 shows that, contrary to popular understanding, this is not primarily a story about trials: most of the case studies concern rollouts, a significant proportion of which are complete.
Figure 5 Trials vs rollouts in food and livestock

Source: IDTechEx
RFID for extra income in the food supply chain varies from tolling tags on vehicles (more income for the turnpike) to tags on hams to demonstrate superior quality and sometimes provide facilities in shops for customers to hold the tagged food near a terminal which then displays the farmer reponsible and much other information. That means more income for the retailer and its supplier of food. Crime prevention refers to such things as anti-counterfeiting and the RFID label doubling as an anti-theft tag in the store.
Figure 7 Actual and expected benefits of fitting RFID to livestock by split of case studies

Source: IDTechEx
We progress towards RFID tagging trillions of items of food every year and billions each of conveyances and livestock. It is for a wide variety of reasons and there will be many more surprises. Will Thailand, which exports 400 million chickens every year and is deeply concerned about avian flu, find a way to cost effectively RFID tag each chicken? Will printed electronics be the key? These and many other challenges and solutions and the very different pace of legislation across the world will continue to mean that best practice will often be seen in small countries across the world. Just as supply chains are increasingly global, so must those seeking solutions look globally, often in surprising places.
Read the full qarticel and Food Traceabiltiy conference review - subscribe to the IDTechEx journal Smart Labels Analyst.
For more, read the proceedings of the conference Food Traceability Dallas February 1-2 2006 and the report Food and Livestock Traceability.
Attend RFID Smart Labels USA or Printed Electronics Europe and receive free access to the journal.
Access the IDTechEx RFID Knowledgebase of over 1800 RFID case studies and rising.