IDTechEx held Printed Electronics Asia 2012 in Tokyo, Japan last week. This is part of the World's global event series on the topic with other events in USA (Dec 5-6) and Europe (April 17-18). Senior-level attendees from some of the biggest chemical, equipment and electronics companies were present from 23 countries, with 50% of attendees from Japan, and 66% of attendees from East Asia.
Hot topics were OLED displays, which will exceed a $4 billion market this year and OLED TVs on the near horizon (albeit not yet printed). OLED lighting also heavily featured, and there was strong interest in all the enabling pieces including transparent conductive films and transparent flexible barriers. There was also huge interest in completely new electronics, such as stretchable electronics discussed by MC10 and the University of Tokyo. The latter described their use of flexible OTFTs to monitor pressure along a catheter, to ensure it is not damaging internal organs as it is inserted.
OLED lighting
Konica Minolta presented on its progress with phosphorescent, R2R solution processing to create OLED lights (see diagram below). The company has developed wide band gap phosphorescent materials themselves, along with their own high barrier film. The global lighting market is approximately $75 billion (equivalent to 10 million m2/year) and in the US alone the Department of Energy has invested $250million to promote solid state lighting (LED and OLED), which has resulted in saving about 4.2 megwatts of energy per year. Contrast PV - where the US Government has invested some $17.5 billion and seen 4.1 megawatts per year of installed capacity!
Improvement of OLED lighting at Konica Minolta 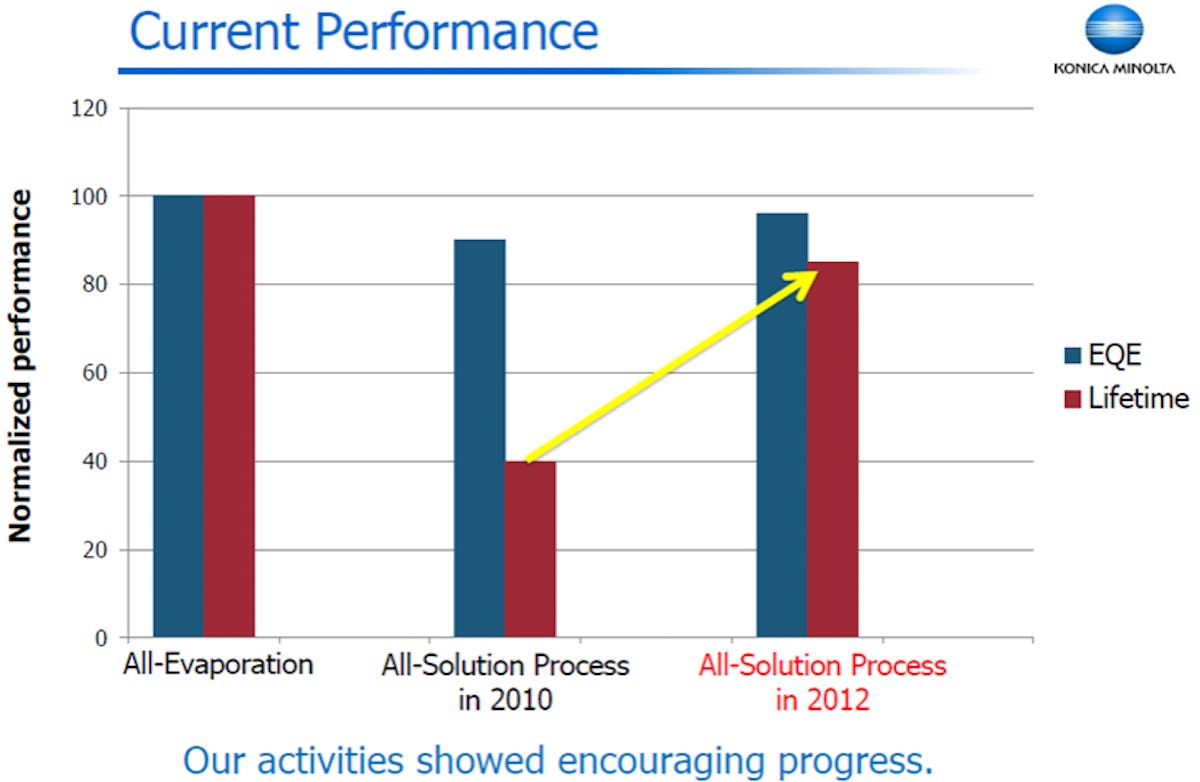 Source: Konica Minolta
There is significant work on OLED lighting but IDTechEx point out that LED lighting is now gaining a strong foothold, cheaper and can do much of what OLED promises. OLED lighting will take more time to achieve yield, lifetime, flexibility and price points needed for wide adoption, but in the last year prices have fallen from $2500/KLumen to about $1000/KLumen (equivalent to about a 60 watt bulb), so companies are chasing down the experience curve rapidly. For more information IDTechEx are launching a new report "OLED versus LED lighting" (www.IDTechEx.com/research).
Chemicals
Several of the most prominent chemical companies presented on their activities. Merck is working on a range of organic and inorganic materials. They have developing coloured materials for colour e-reader applications - the next opportunity for black and white e-readers, which are now in a no growth phase due to full colour "pads". They have achieved mobilities of 5cm2/Vs using their vacuum processed materials for OTFTs. Inkjet printed versions achieve mobility of 3-4. Their roadmap is shown below. Merck make several parts of the material stack including semiconducting materials (small molecule or polymeric), matching dielectrics, surface treatment materials and passivation materials. Merck is also working on OPV, with efficiencies beign developed from 2.8% in 2009 to 8% this year. They are also working on inorganics - namely precursors for metal oxide semiconductors.
Merck's Organic Semiconductor Development Roadmap 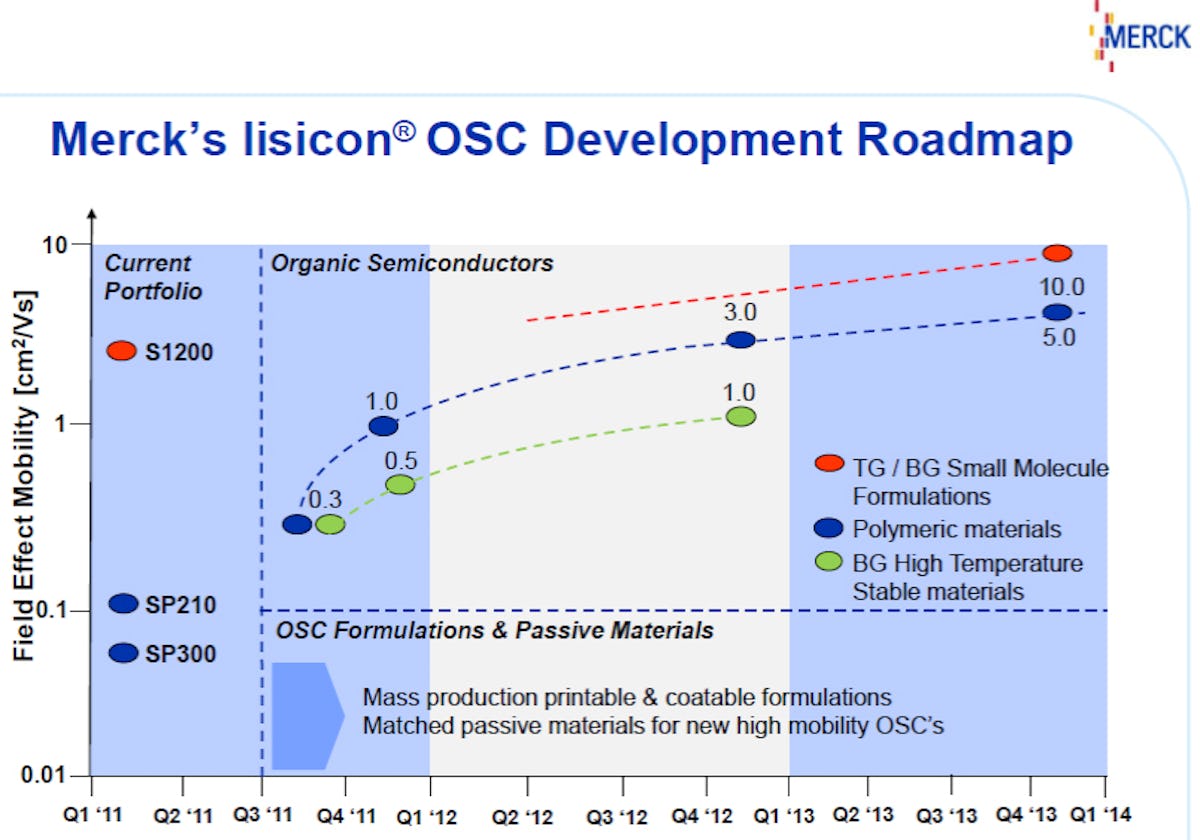 Source: Merck
Solvay are also working on organic materials for OLEDs and transistors. Working with Plextronics, a US company that they have invested in, their target is high efficiency WOLEDs processed from solution.

Thulliez from Solvay reported that the solution processed EML layer is a challenge which they are working on - it reduces the lifetime of the device, as shown below. 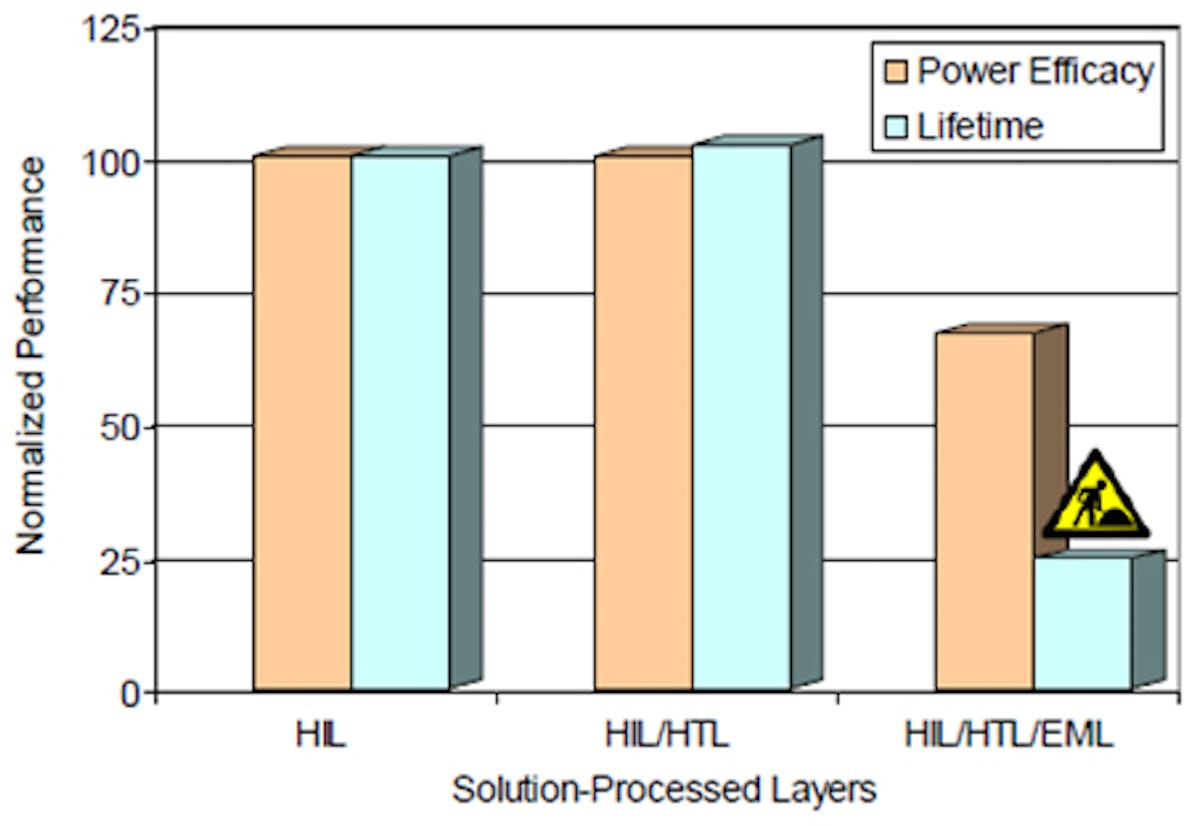 Bleak view of PV
Paula Mints of Navigant Consulting gave a detailed market update on PV. She reported that the entire industry, over three plus decades of existence, only saw four years of profitable sales. This year, PV cells are selling at around $0.95/Watt peak, but she feels that the figure needs to be around $1.30/Watt peak for suppliers to make money. Oversupply and governments turning off the incentive tap are major problems. She sees on-going consolidation, particularly in China. The share of thin film PV has decreased, given that Si PV prices have come down so drastically. Those that can weather the period expect to see long term stability and growth.
Here Comes China
China's printed electronics activities are moving quickly. The country has formed its own association on the topic, and several universities are focusing on the topic. Announcements have been made from companies such as IRICO investing in OLED display manufacture. Prof Cui of the Printable Electronics Research Center in China covered, among other things, a new company making transparent conductive films using finely printed silver grids. Unlike most other similar solutions, they create indentations in the substrate, so that the conductive materials sit in the substrate rather than on top of it. The conductivity results shown were impressive versus rivals.
Learn more
If you missed the event you can access the presentations from companies such as Samsung, Hitachi Chemicals, Diageo, Sumitomo and many others at www.PrintedElectronicsAsia.com