IDTechEx predicts that the market for carbon nanotubes (CNTs) for electronics applications, currently still in its infancy, will reach $50M in 2013. Production capacity of single-walled carbon nanotubes (SWCNTs) will grow rapidly in the next couple of years reaching several tonnes. With that, first volume applications (not including mechanical enhancement) will be available from 2016 onwards resulting in revenues worth several billion US dollars. Full market forecasts are available in the brand new IDTechEx report "Carbon Nanotubes (CNT) for Electronics & Electrics 2013-2023: Forecasts, Applications, Technologies" (www.IDTechEx.com/cnt).
Fig 1. Market forecast for carbon nanotubes in different applications between 2013-2023. 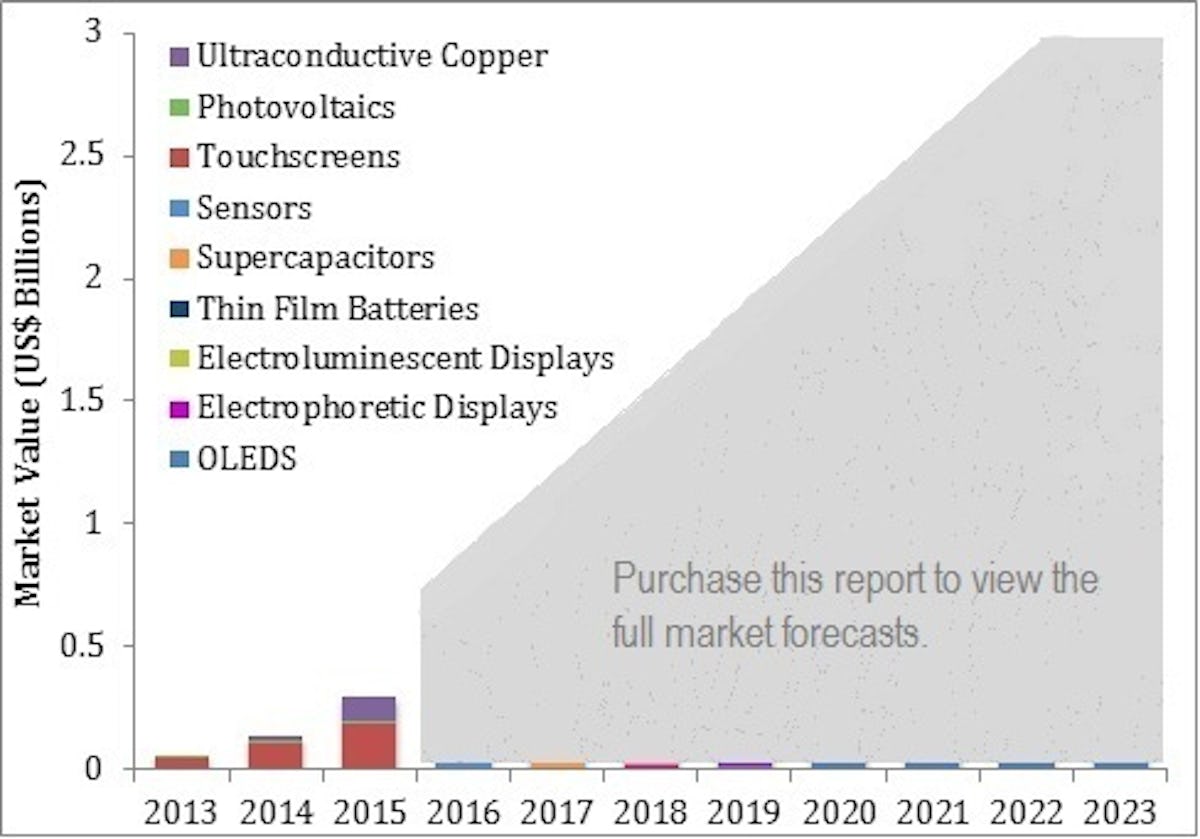 Source: IDTechEx, "Carbon Nanotubes (CNT) for Electronics & Electrics 2013-2023: Forecasts, Applications, Technologies" (www.IDTechEx.com/cnt
In general, multi-walled carbon nanotubes (MWCNTs) are much more mature in terms of commercialization, production and market penetration. Production capacity wise, several tonnes of MWCNTs annually stand against under one tonne for SWCNTs. Several CNT-enhanced products are already in the market, mainly in form of additives and composites with improved stiffness and strength, such as reinforced sporting goods, battery electrodes and thermoplastics.

Within the Electronics & Electrics segment, the ITO replacement market is the largest target market. ITO is brittle and cannot usually withstand multiple flex or bend operations without cracking. This serves as a strong motivation to adopt ITO alternative materials in flexible displays, but there is a small market as yet for flexible displays.
Fabricated as transparent conductive films (TCF), SWCNTs can potentially be used as a highly conductive, transparent and cost efficient alternative in flexible displays and touch screens, for instance. While the cost of carbon nanotubes for printed electronics applications was once prohibitive, it has been coming down in recent years as chemical companies build up manufacturing capacity, now reaching $10 per sq m for film applications.
Apart from TCF applications, carbon nanotubes for thin-film batteries, supercapacitors and ultra-conductive copper will reach a significant share of the overall market driving the further ramp-up of production capacity and with that cost reduction.

While looking for nanomaterials that could enhance copper's properties, a study by the International Copper Association (ICA) in 2009 found that 0.1% wt carbon nanotubes could enhance the ambient temperature electrical conductivity of copper by 30%. The ICA is largely funding efforts in this direction ever since. On-going research and development shows progress for methods of incorporating the tubes into copper. In 2011 UC copper with 130% International Annealed Copper Standard (IACS) was demonstrated.
According to the 2012 International Copper Association's (ICA) Copper Applications Technology Roadmap the target is to enable efficiency improvements in electrical energy transmission and distribution networks with ultraconductive copper (UC copper). Also, low loss electrical motors and generators and reduced heat generation in all types of electronic systems.
Feasibility studies are still on-going, but first pilot plants and production capacity in the range of 5-10 tonnes per year are envisioned for 2015/16 by the ICA and single-wall CNT suppliers, like SouthWest NanoTechnologies (SWeNT)

The actual market potential could be as high as 10,000 tonnes SWCNTs annually, but only if the price could come down to a few thousand US dollars per gram. A hundred times the amount of what it is currently. A reduction by a factor of 10 could be achieved through a green production process with reduced need for chemicals and recycling steps for the large amount of waist, eg over 90% of the carbon-containing gas.

All of these trends, including detailed ten year forecasts by electronics application as well as primary use markets are covered in the new IDTechEx report "Carbon Nanotubes (CNT) for Electronics & Electrics 2013-2023: Forecasts, Applications, Technologies" (www.IDTechEx.com/cnt). Comprehensive company profiles are provided. Where direct interviews with decision-makers within the companies were conducted, detailed insight is given into their state of the technology, target markets, assets and business strategy. Using our insight, an overall picture of the emerging carbon nanotube industry for electronics applications is constructed.
For more attend the forthcoming events:
Printed Electronics Europe, Berlin, Germany, April 17-18 2013 .
Graphene LIVE! April 17-18 Berlin, Germany