The FLEX 2013 conference and exhibition took place in Phoenix, Arizona between the 30th of January and the 1st of February 2013. The Phoenix convention Center welcomed around 500 attendees over 3 days. They had the opportunity to assess latest developments and research directions in the space of printed, flexible and organic displays and electronics.
The conference itself included three days of presentations from companies, universities and research centres in all parts of the value chain for these emerging technologies, examples being DuPont Teijin Films, Philips Lighting, UDC, Applied Materials, Plastic Logic, MC10 and many more.

Dr Bill McDonald with DuPont Teijin Films, presenting in the keynote session, gave an overview of the success of polyester substrates for the flexible electronics industry and discussed the future paths expected to be followed. Widely considered the "boring" part of any electronic component, the substrate is in fact, according to Dr McDonald, an essential building block for any device and its set of properties will be critical in defining performance metrics.
The "holy grail" for an ideal substrate is simple: water white, low CTE, low shrinkage, high temp stability (>300C)... Given the fact that the entry cost to scale up a new material to commercial volumes, involving some or all of the above metrics, is likely to be prohibitively expensive, Dr McDonald felt that the most likely development route would be based on optimizing existing material systems. Cleanliness and lack of defects on substrate surface and the competition arising from other options such as steel foils or flexible glass were also noted, giving a very inclusive view of the current competitive landscape.

Mike Hack with Universal Display Corporation discussed the opportunities for flexible OLED displays, mentioning the very secretive barrier layer that UDC has been developing in-house, which the company presents as a simple solution to the issue of water and oxygen sensitivity of active OLED materials. As a major IP innovator, technology developer, patent licensor and materials supplier for the rapidly growing OLED markets, UDC has been in the front line of innovation in the space of organic electronics and is pushing even forward the OLED metrics that have made it a technology worthwhile advancing: lower power consumption, superior aesthetics and innovative form factors, all achieved in a cost effective way. According to Mike, commercialization of flexible displays will arrive before the widespread adoption of OLED lighting, the latter having to compete directly with inorganic LEDs that are already lower cost and in many cases better performing. 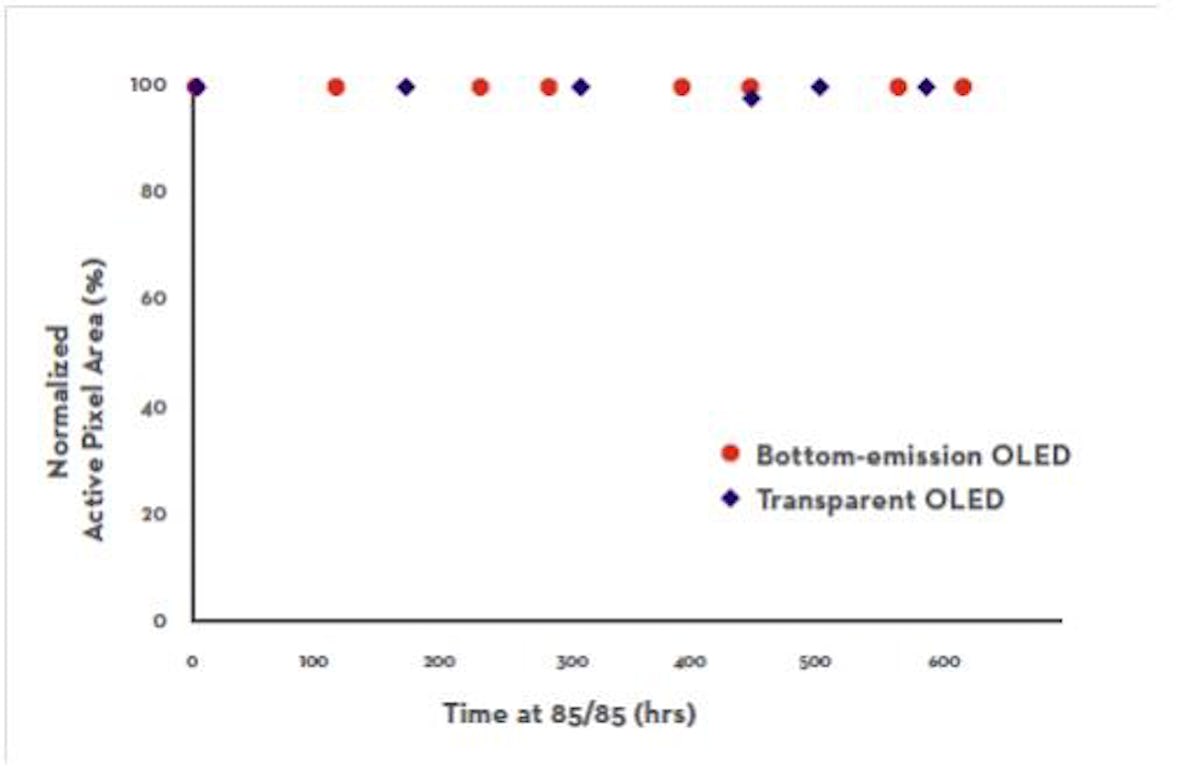 Performance graph of the UDC transparent barrier layer (Universal Barrier Technology). Source: UDC
As for the challenges in bringing flexible displays to market, Mike Hack outlined the following three as the most important ones:

Imagine....editing your spacecraft on a laptop, printing it using an inkjet printer and deploying thousands of copies..... Ms Kendra Short and Dr David Van Buren with the Jet Propulsion Laboratory - part NASA and part Caltech- discussed exactly that: The concept of the printable spacecraft; a two dimensional "sheet" that contains all of the functional subsystems of a typical spacecraft - science measurement through data downlink, with all elements printed onto a common substrate as an integrated system platform. Low recurring costs on a flexible platform, mass production capabilities at short cycle times and robustness of devices manufactured are some of the main advantages of the approach. With integrated systems already being realised, such as printed sensors monitoring pressure, temperature, humidity, etc... there's a lot of research effort towards complete printed solutions, with current challenges including:

Finally, the conference presentations included one of Plastic Logic, who recently demonstrated their SERELEC zero energy display, a commercial product for the advertising industry: Each ZED unit consists of a pair of Plastic Logic's tiled display modules integrated in a slim metal housing, specifically created for the application. Each of these "two-up" modules consists of two 10.7" monochrome flexible plastic displays, which have been seamlessly tiled together to create a larger flexible display (15.4" diagonal) with 150 dpi at a fraction of the weight of standard glass-based displays (merely 115g). 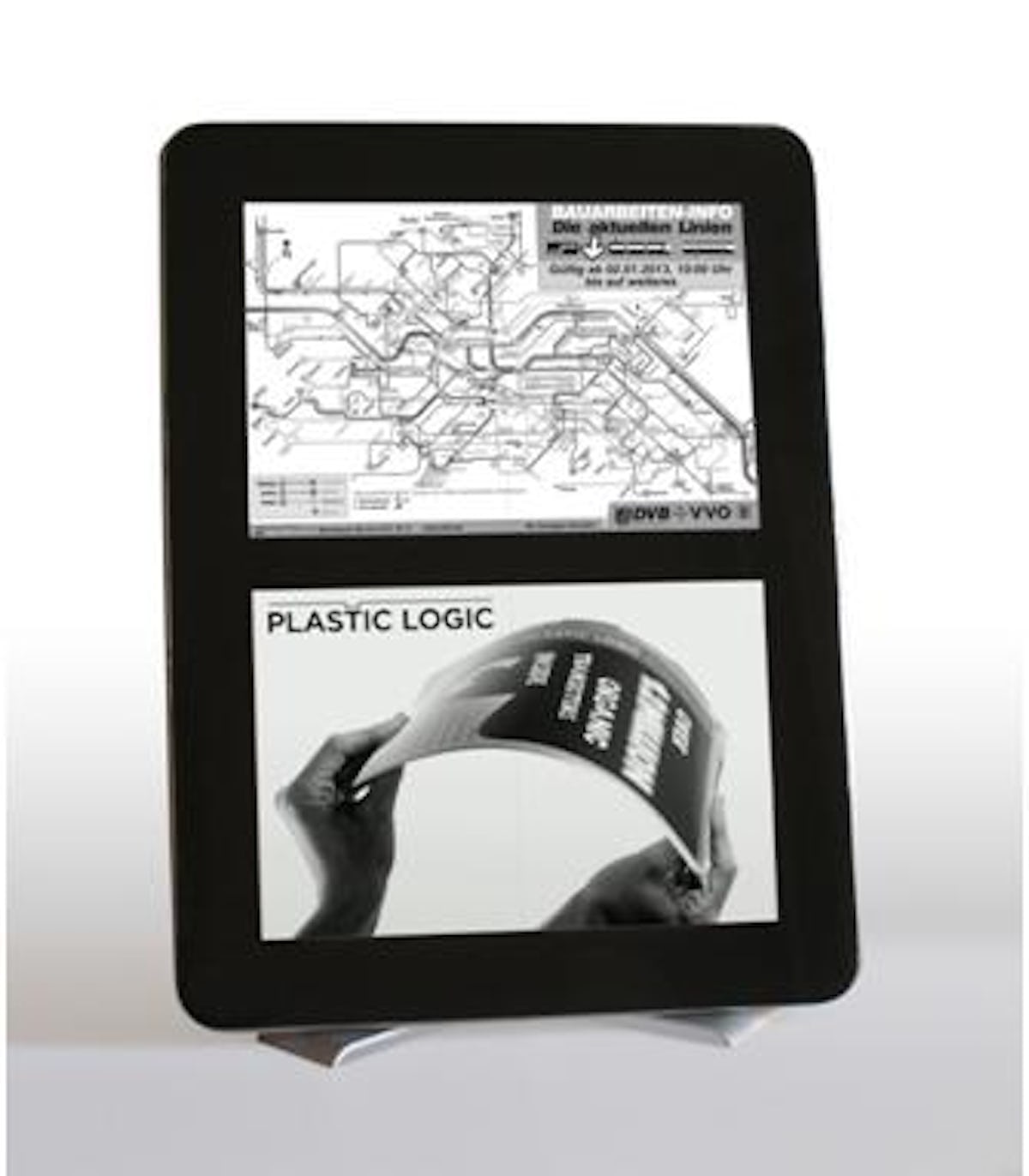 SERELEC, the zero energy display unit by Plastic Logic
Indro Mukerjee focused on discussing how a company should learn and adapt, a life-like, "organic" process that couldn't be more relevant than in the space of organic and flexible electronics...
A multitude of other presentations covered many other topics, such as sensor technologies, flexible and stretchable electronics, high barrier technology developments, TFTs, manufacturing technology developments to name a few.
For more information, contact Dr Harry Zervos (h.zervos@idtechex.com), IDTechEx's senior technology analyst who covered the event and posited the importance of identifying reasons for current successes in the printed electronics space during his presentation. One important point raised was the fact that in order to achieve successful commercialization of a technology, it must be timely and at a technology maturity level that will ensure adequate performance in chosen applications. That might have been the reason why organic photovoltaics are currently regarded at times as a failure, when in reality, they are just a technology that will be a success, only not just yet...
Top image source: Flex 2013
For more attend the forthcoming events:
Printed Electronics Europe, Berlin, Germany, April 17-18 2013 .
Graphene LIVE! April 17-18 Berlin, Germany