IDTechEx Research attended and presented at this event in Nuremberg this week. The opening presentation was by Gildas Sorin, CEO of Novaled, presenting on how OLEDs will dominate the display sector. Novaled supplies materials for the OLED stack. He reported that OLEDs bring more customer satisfaction by offering superior colour, faster response time (better for 3D TV), power saving in video modes and new form factor options such as flexibility and being lighter weight. He described OLEDs as an LCD evolution - with advantages for LCD makers being that they can use their basic know-how from TFT backplanes and front planes and transfer these to OLEDs, which offer a simpler display architecture than LCD. They do not have to write off as much know-how and capital as they did when transferring from CRT monitors to LCDs.
Sorin believes that OLEDs will be cheaper than LCDs because the structure is simpler - fewer components are needed, no backlight is needed, existing LCD manufacture can be converted to OLED technology, he claims, with re-use of TFT backplane manufacturing capacity. 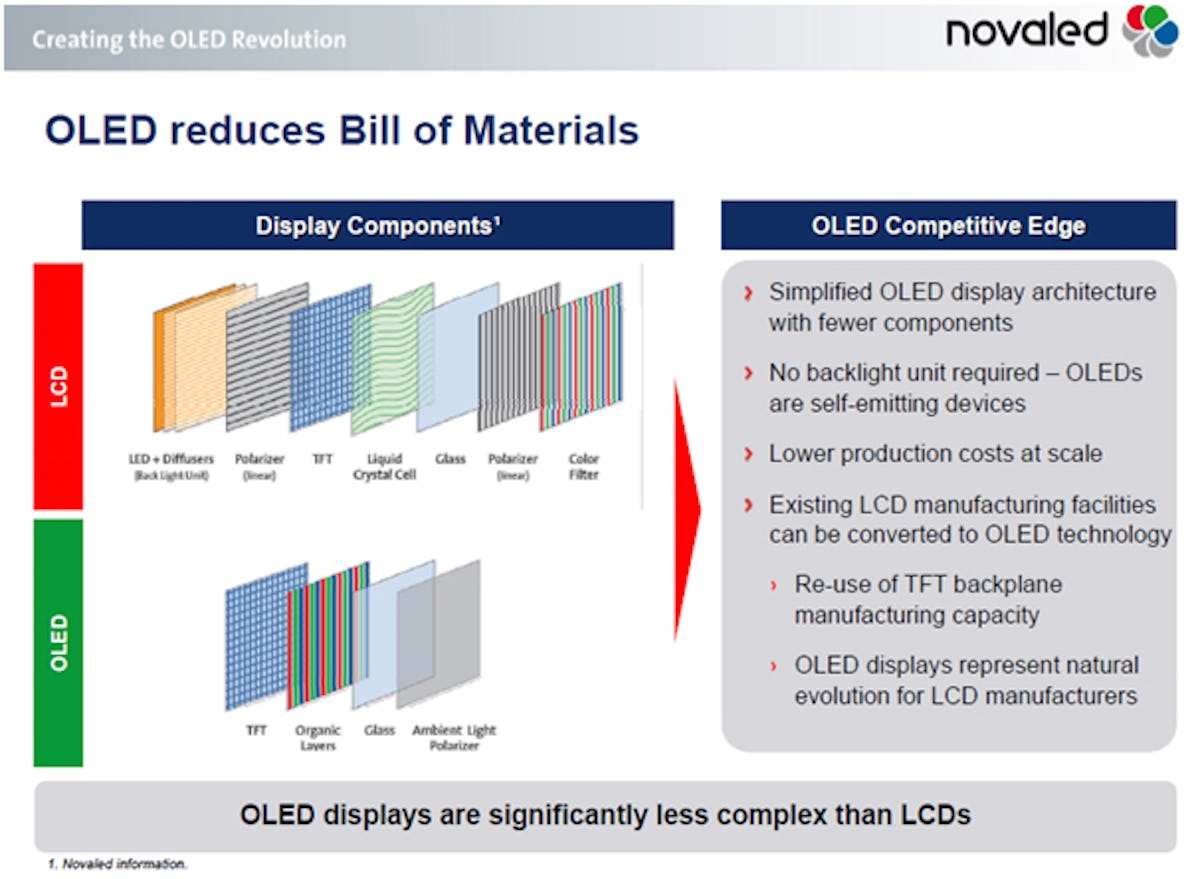 Source: Novaled
However, IDTechEx Research feels that this is an over-simplified view. While the OLED layer looks simpler than LCD versions (see above) the organic layer can involve 20-30 layers in some cases, which have to be deposited without pin holes and very thinly. Moving from aSi TFT to other forms of TFTs (covered later in this article) is far from trivial. In addition, it will take time for the cost of the new materials to come down, which is outside of the control of many of the display makers.
Investments
Sorin reports historic and future investments in OLEDs as follows, by the big two:
• Samsung invested $4.8 Bn in 2011, $6B in 2012, and will invest $4 Billion in 2013. It has sold more than 100 million OLED displays used in the galaxy S series alone
• LG invested $225 million in 2010, planned investment of approx. $2.8 Bn in 2012, of that $1.9Bn in R&D related to OLED.
Sorin also reported notable investment by Chinese companies with potential first production from 2013. In future, they may be strong competition for the Koreans. He summarised the TFT/OLED technologies as follows. 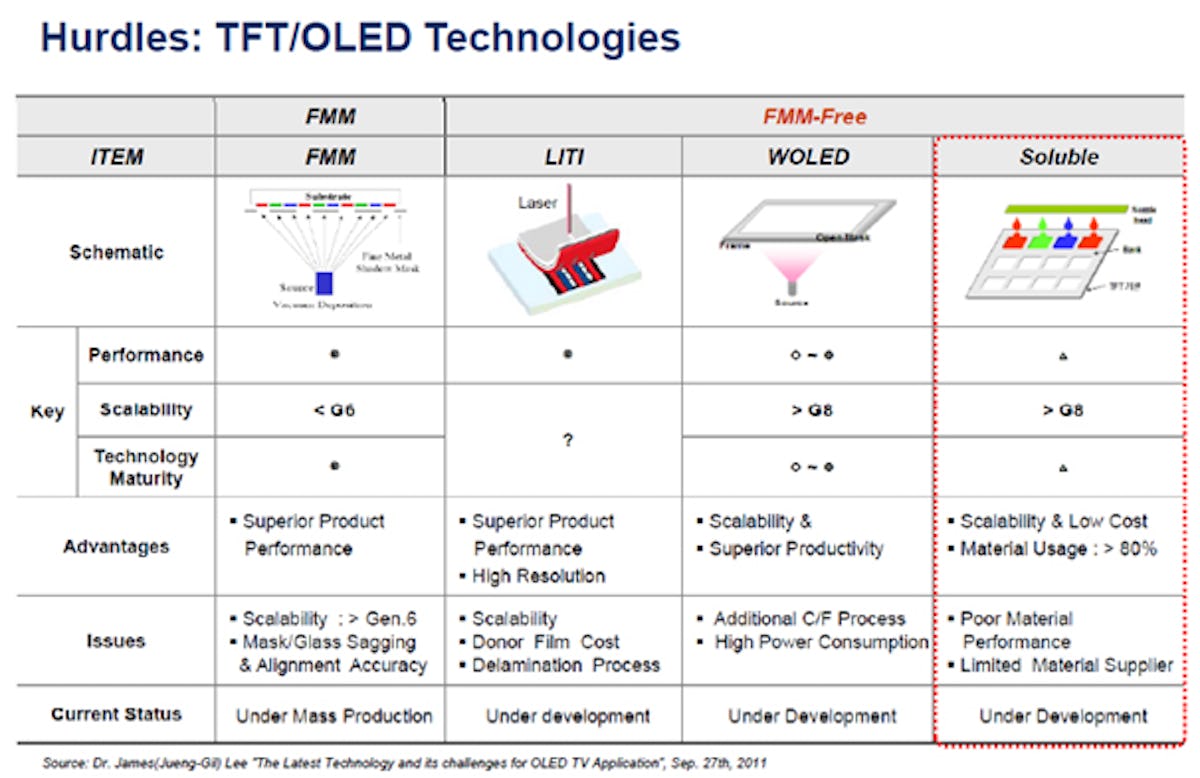 Source: Novaled
FMM is being pursued by Samsung. The WOLED technology is being predominately developed by LG for their 55" TV. As one would expect, Sorin reported that the yield of the TV is extremely low, pushing up the price, but he said never to forget history - the first LCD TV was approximately $15,000 - the price will come down. Despite LCDs moving to higher resolution - 4K - Sorin felt that OLEDs will also achieve that, but in the short term - this year and next - the 4K LCD TVs will outsell OLED TVs. Novaled is working with companies such as Samsung, LG and Panasonic to supply materials for parts of the OLED stack.
When asked of the different approaches from the main suppliers, Sorin responded that Samsung is focussed, at least in the short term, on small molecule RGB OLED devices. LG is developing WOLED which require a colour filter but are also pursuing solution processing. Panasonic is focussed on solution processed, but overall it is too early to say which will win as all options have different advantages and disadvantages - he feels that several may succeed.
TFT backplane technologies
The following speaker was Prof Norbert Fruehauf, who discussed backplane TFT technologies for displays, particularly OLEDs. Of the four technologies, shown below, his team has fabricated each type to compare them. 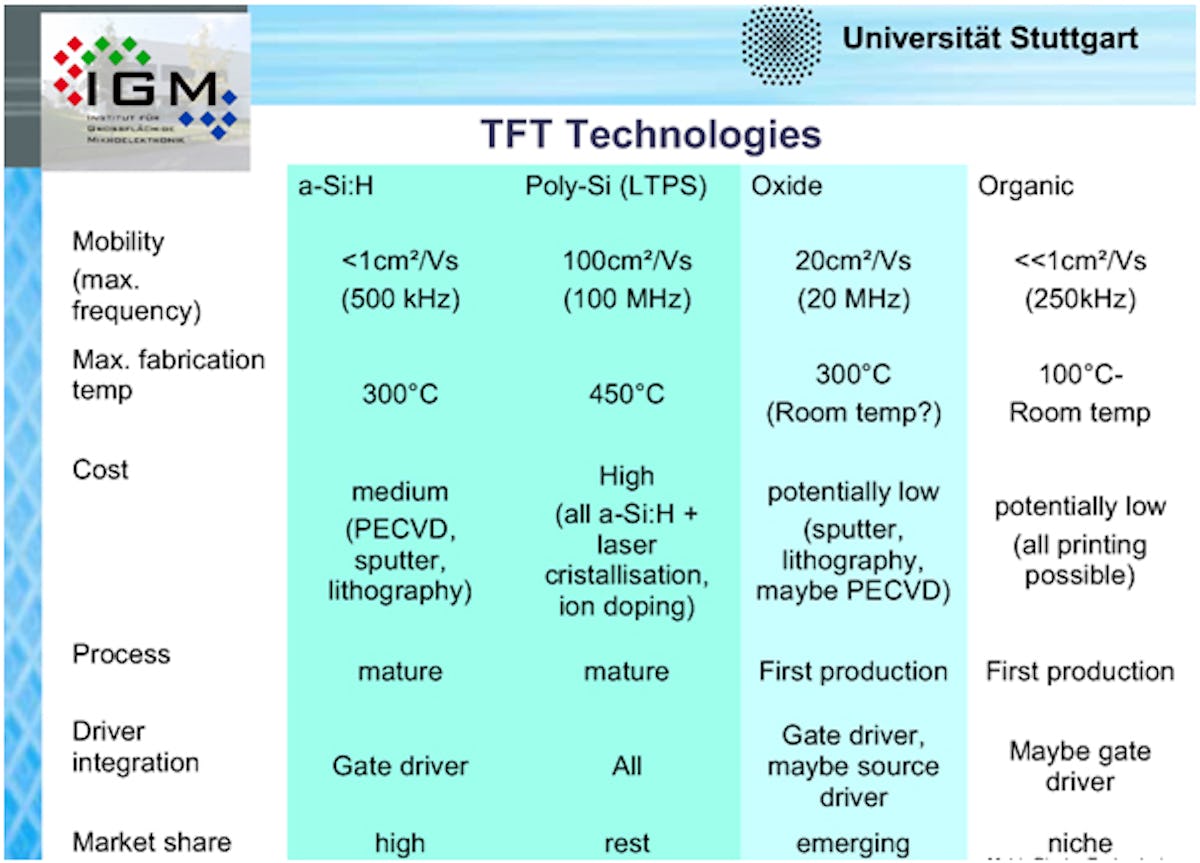 Source: University of Stuttgart
aSi is used most widely today for LCD backplanes, and therefore it has a large installed manufacturing infrastructure. It is easiest to transfer that technology to IGZO TFTs (metal oxide TFTs) rather than the other technologies as the IGZO device is very similar to the aSi transistor structure. Metal oxide semiconductors have wide band gap, meaning that visible photons would not be absorbed by them, so they are transparent. However, the difficult part is making the columns and row conductors transparent. The transistor itself is small and the row and column lines take much more of the aperture - and those developing transparent displays need to focus on that more than the transistor.
Metal oxides are deposited by sputtering, usually at lower temperatures than the other options which means that lower temperature substrates can be used. He reported that one needs to keep an eye on claimed mobility figures however because mobility depends on the channel length of the transistor and these are not always standardised as they are made by different processes.
For a 4K 32 inch panel he calculated that you need a channel width of 16 microns when using aSi, where it has a mobility of 0.5. This has been shown by several groups. With IGZO you need 20nm, as shown below. 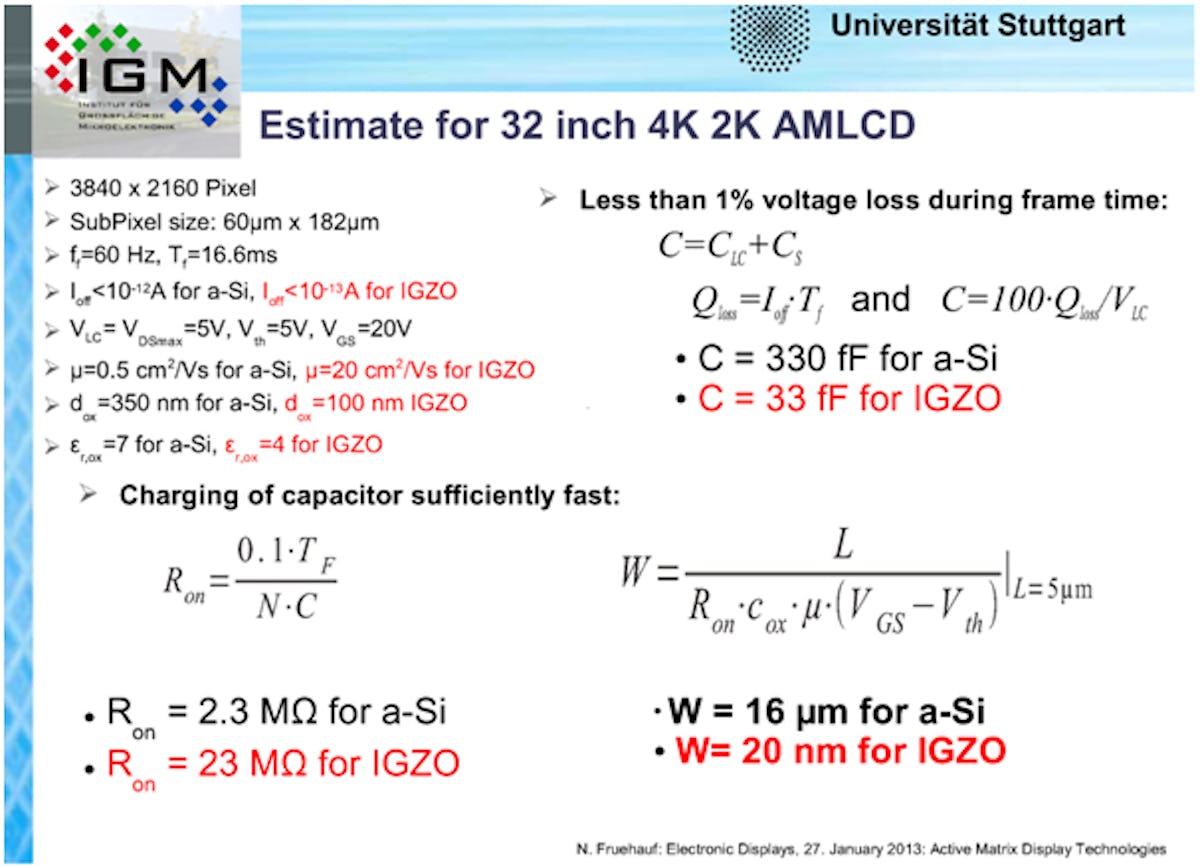 Source: University of Stuttgart
For AMOLED displays LTPS offers best performance, aSi is not good enough and IGZO is in the middle. He also pointed out that he has not seen any OLED displays yet that are less power consuming than LCDs.
A view from the car industry - from BMW
Michael Heimrath reported from BMW their interests, where research for technologies that could be used in cars from 4-15 years out is covered. The big future trend is automated driving from point to point - which he thinks could become legalised and in use from 2020. But then, he says, the interior of the car needs to be completely rethought because drivers then have free hands to do other things. The trends are as follows: 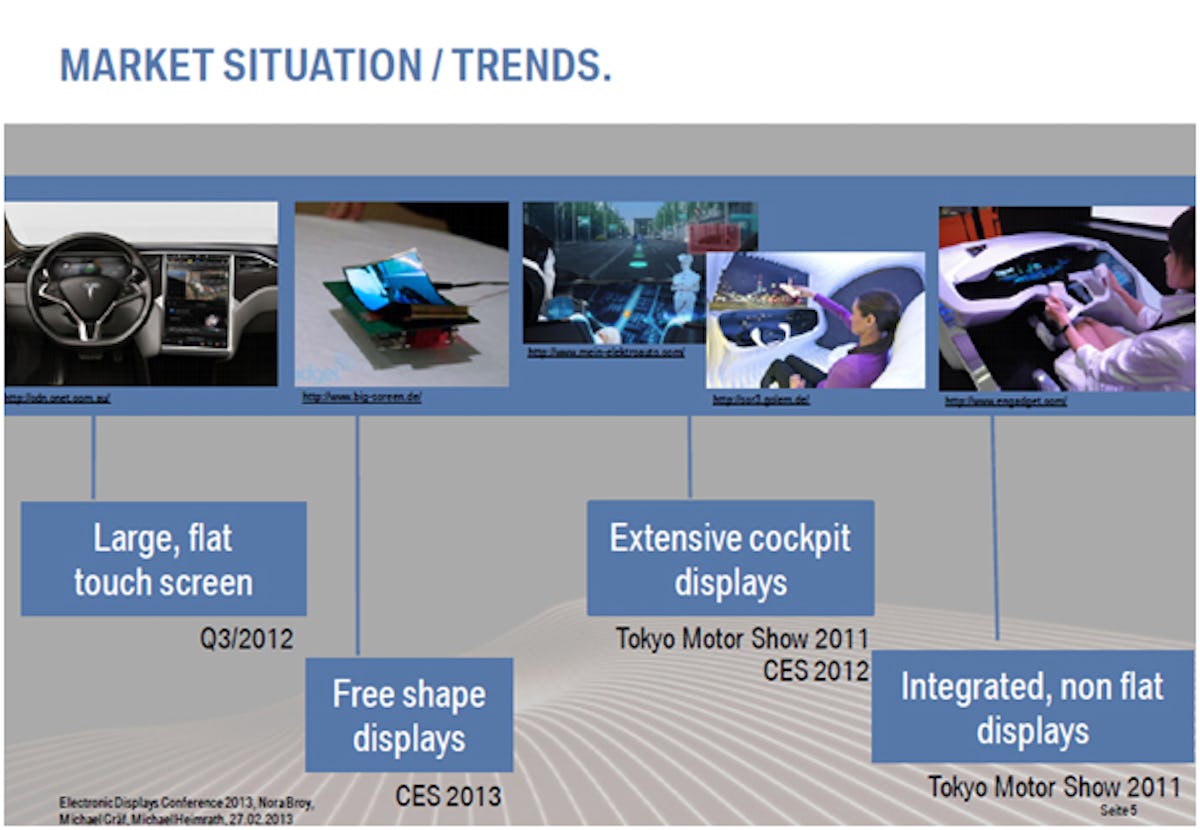 Source BMW
BMW's vision is as follows on the left, but the limitation of display technologies today - being rigid - means that the reality is shown on the right. 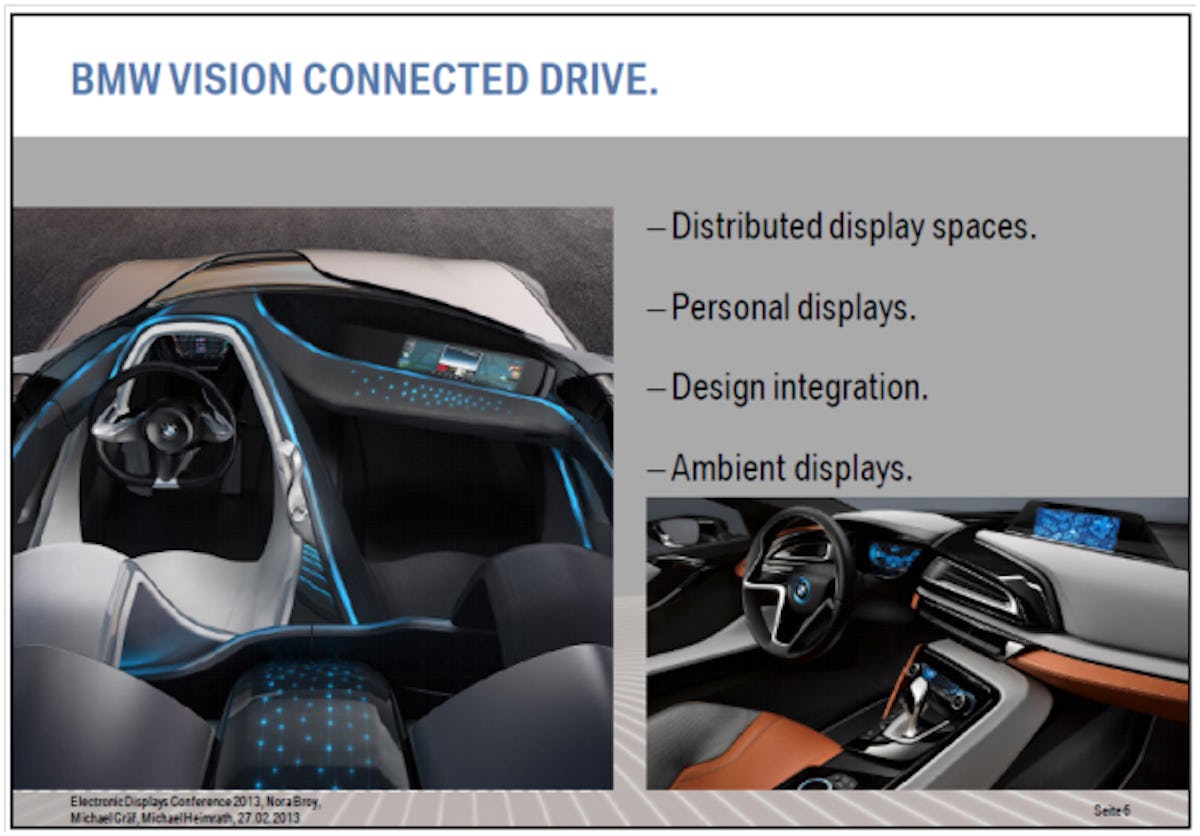 Source: BMW
3D displays are of particular interest because they can make displays more engaging and provide interesting solutions for heads-up displays. However, you also have to be careful of information overload and visual fatigue. They have tested both 2D and 3D displays with consumers in a driving simulator in different conditions and all found that 3D has the same functional use but is more attractive.
In conclusion, Heimrath summarised that display technologies of greatest relevance to the automotive industry are versions that can be flexible ("freeshape") and 3D capable versions - both of which suit OLED more than any other active matrix display technology.
Requirements from the Out of home advertising industry
Presenter Stefan Kuhlow reported that in recent years outdoor advertising has been growing strongly. This is mainly because the profile of those watching TV has changed, certain demographics now watch TV much less due to the use of tablets and smart phones, and therefore outdoor advertising is more effective in reaching them. The main technology needs are the requirement for larger displays, and also more interactive displays, with touch or other feedback systems allowing people to engage with the advertisers. One demonstration of such an interactive display is a camera which scans you and projects an image of you on a screen in real-time, showing how you look with different shoes that you can select from the screen (without taking your own shoes off). You can then purchase the shoe you like most by scanning the QR code on the screen with your phone and paying for it via your phone. This has been trialled in shopping malls in Germany.
For more information read the IDTechEx Research report OLED vs LED Lighting. In addition, attend OLEDs LIVE! - covering the complete value chain of OLEDs for both lighting and displays. It is held in Berlin on April 17-18 and co-located with the IDTechEx Printed Electronics Europe event. Register now for the best rates - see www.IDTechEx.com/oledslive.