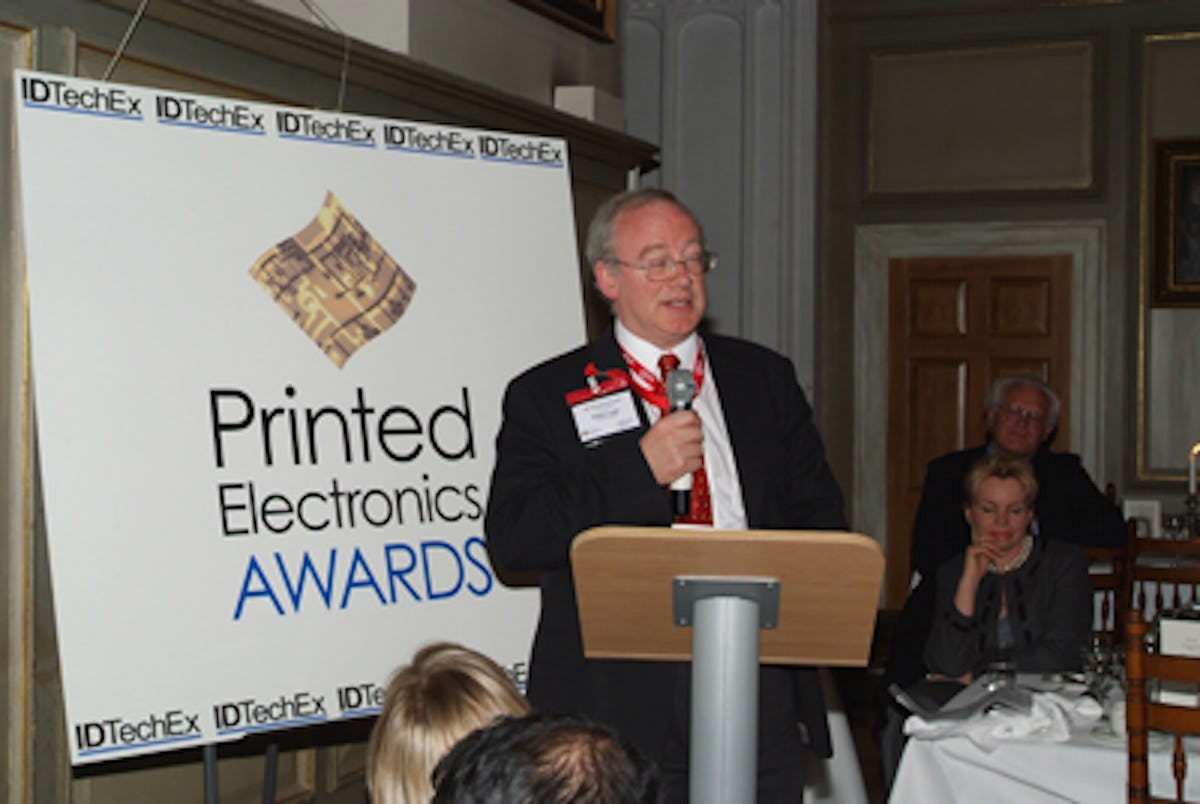 Printed Electronics Champion of 2007 - Stuart Evans of Plastic Logic
Plastic Logic was spun out of Cambridge University's Cavendish Laboratory in 2000. Its first target market is 'take anywhere, read anywhere' electronic readers incorporating flexible active matrix displays with millions of printed transistors. These readers will be thin, light and robust, enabling a reading experience closer to paper than any other technology.
As founding CEO, Stuart Evans took Plastic Logic from being an unknown company involved in an obscure technology to being famous and respected word-wide. Stuart is well known for lively presentations, panel chairmanships and active participation at industry events in US, Asia and Europe. He is a popular and frequent speaker at IdTechEx events.
The company raised $50 million equity during 2000-06 to develop its technology. At the start of this year it announced a further $100 million equity fundraising to build its first factory in 'Silicon Saxony' in Dresden Germany that will be on-stream by the end of 2008.
Amadeus Capital Partners was the company's original lead investor, and was followed by other strong financial investors. The company also has an impressive cadre of corporate investors, including Bank of America, BASF, Dow Chemical, Intel, Mitsubishi and Siemens. This is a textbook example of attracting best-in-class investors from around the world that help create an eco-system for a new industry. We are sure Stuart will continue to be one of the best connected and most respected evangelists for printed electronics in the years ahead. 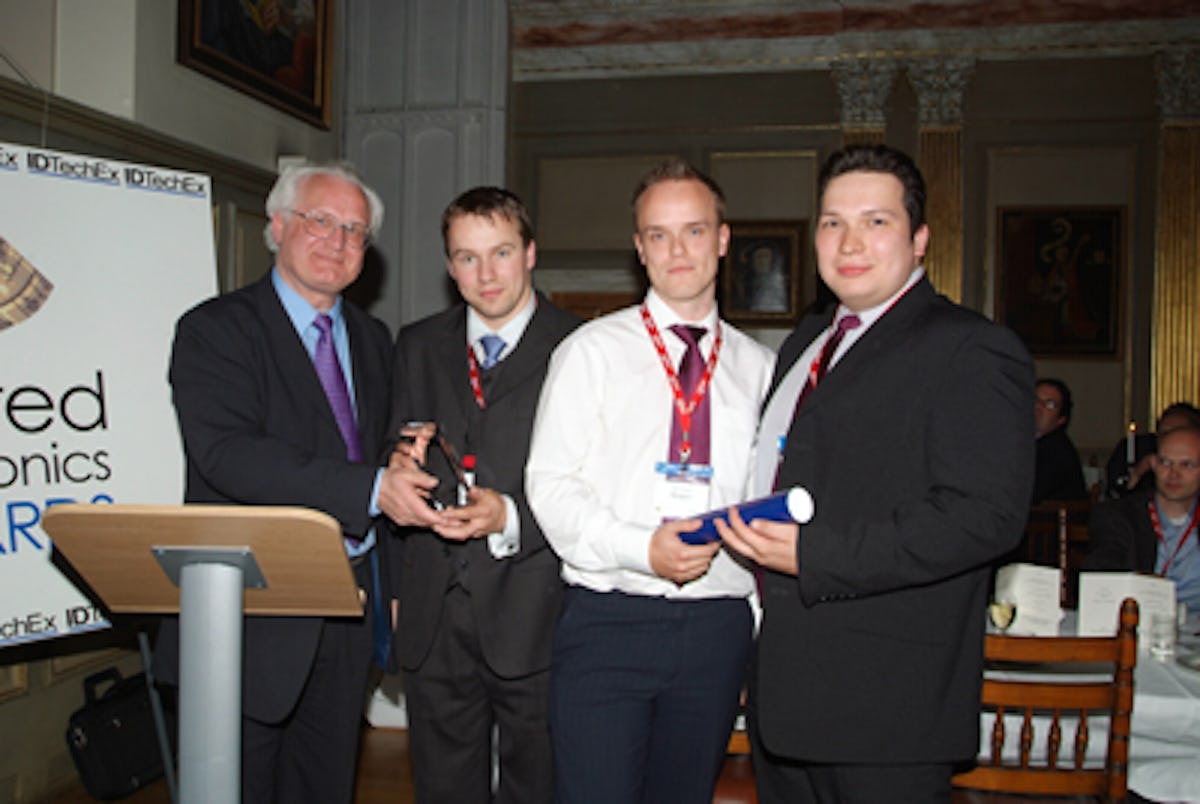 Best Commercialization of Printed Electronics - Menippos
Dr Peter Harrop, Chairman, IDTechEx presents the Printed Electronics Award to Menippos
We believe that Menippos is unique in having sold 700,000 of a printed electronic product in only a few months in 2006. It achieved this by designing an innovative new product - something relatively rare in this industry. Using the technology of today rather than waiting for printed transistor networks and other capabilities still on the horizon, the Hurrafussball game takes the company into major possibilities for the future as well. It is a wake up call to the printed electronics industry, showing that it has huge opportunities with technology already available as long as it innovates in the marketplace.
HurraFussball is the first Connecting media game, which is based on printed electronics. It couples the world of ordinary trading card games with the world of ordinary online games by trading cards, which are electronically equipped with a printed polymer 16 Bit ID Tag. The game marked the beginning of a functioning co-operation between Menippos GmbH as a game-publisher and printed system GmbH as a technology deliverer.
HurraFussball was listed at the biggest game distributors in Germany. Menippos placed more than 700.000 cards in Germany within four months. More than 30.000 different users visited the website of HurraFussball, the game opens a door to young and open-minded users. More than 200 publications in German and international newspapers, magazines, internet sites and TV-shows (gamers magazines, general interest magazines, technology magazines) brought publicity not only to the single game but to printed electronics as a whole.
Best Technical Development - Devices - Pelikon 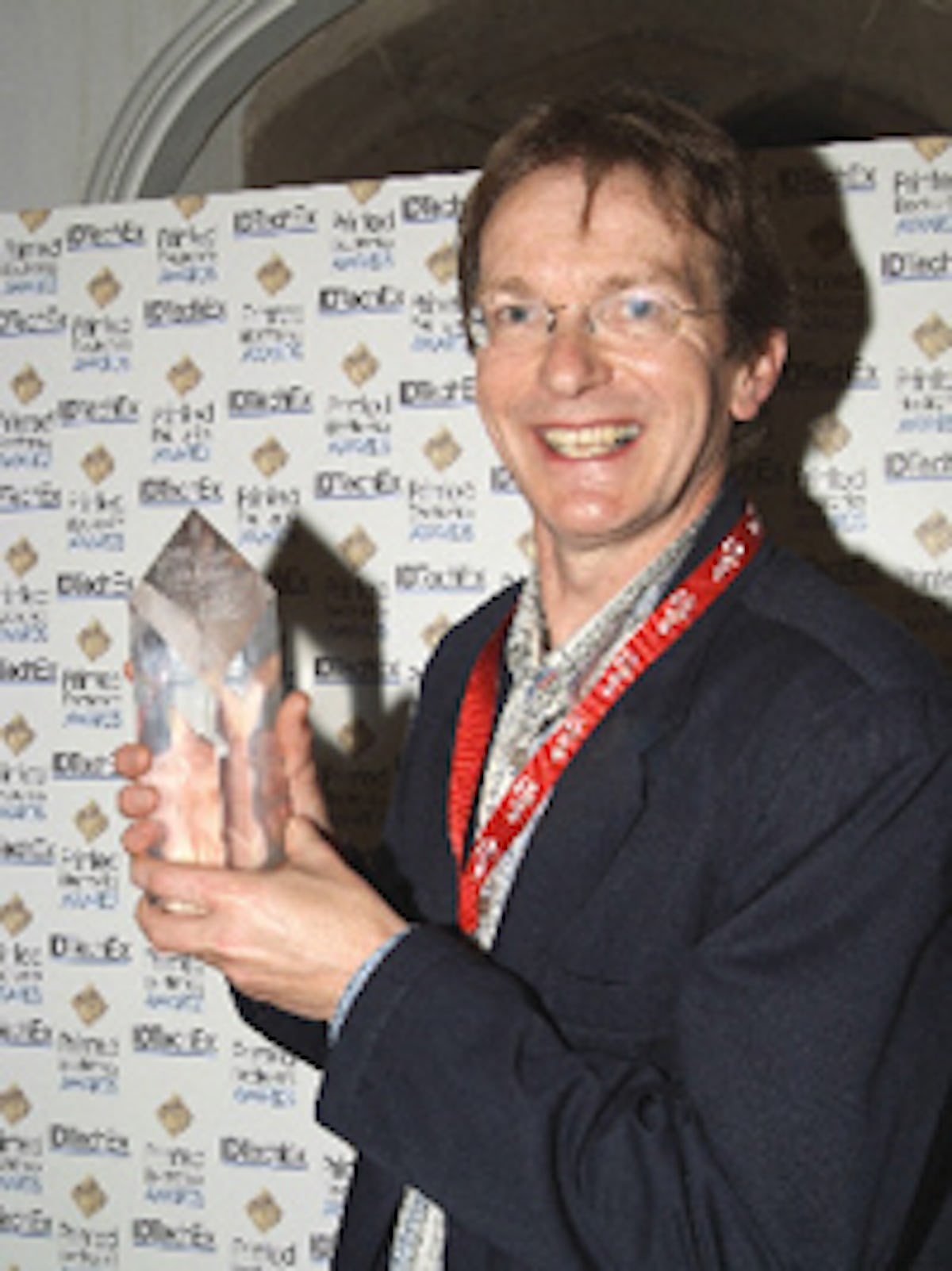 Ac electroluminescent displays have been almost entirely printed for longer than any other type of display. However, all light emitting displays fight the sun and usually lose, something we all know from trying to use a mobile phone or laptop in the open. Faced with this problem, experts at the ac electroluminescent display company Pelikon have created an imaginative solution.
Pelikon has been able to demonstrate that, by the addition of a liquid crystal layer which acts as a shutter system to incoming light, the emissive EL display will now be visible in bright ambient lighting conditions. The black liquid crystal layer becomes transparent when a high voltage is passed across it. The display then shows the reflected light from only the intended lit area which can be read in bright ambient conditions.
Operationally, the liquid crystal and EL panel have proved compatible since they both require a high voltage-low power input. A key achievement has been to drive both of these from the same drive electronics thus producing a simpler, low component count solution. The judges were impressed how Pelikon innovated whilst producing this pSEL Hybrid display suitable for all lighting conditions. For instance materials and fabrication processes have been developed that enable construction of a display by overprinting an electroluminescent lamp construction directly on to a state of the art, polarizer free, polymer dispersed liquid crystal element. New binder resins have been developed which ensure a robust construction which will withstand the effects of overprinting with the EL panel layers.
The whole panel construction is still built up on a single flexible substrate and driven by a single, proprietary drive circuit, which is small and highly efficient. This keeps the component count low and the footprint small, which is critical for acceptance in mobile devices where space for electronic components is limited. Pelikon has also proved that pSEL Hybrid can be a relatively low cost and simple volume manufacturing process, particularly as it is built upon existing expertise.
Tests have shown that in application, pSEL Hybrid power consumption will be lower than that of OLEDs and some LEDs. Also, since the pSEL hybrid only consumes power for the areas on the display (such as a mobile keypad) where it generates light, the low power consumption makes it particularly attractive for battery operated devices.
Compare this to an LCD touch screen which consumes the same amount of power irrespective of the image produced.
The judges are impressed that key market players have expressed an interest in pSEL Hybrid, underlining both its market viability and its production feasibility.
Best Technical Development - Materials - Merck 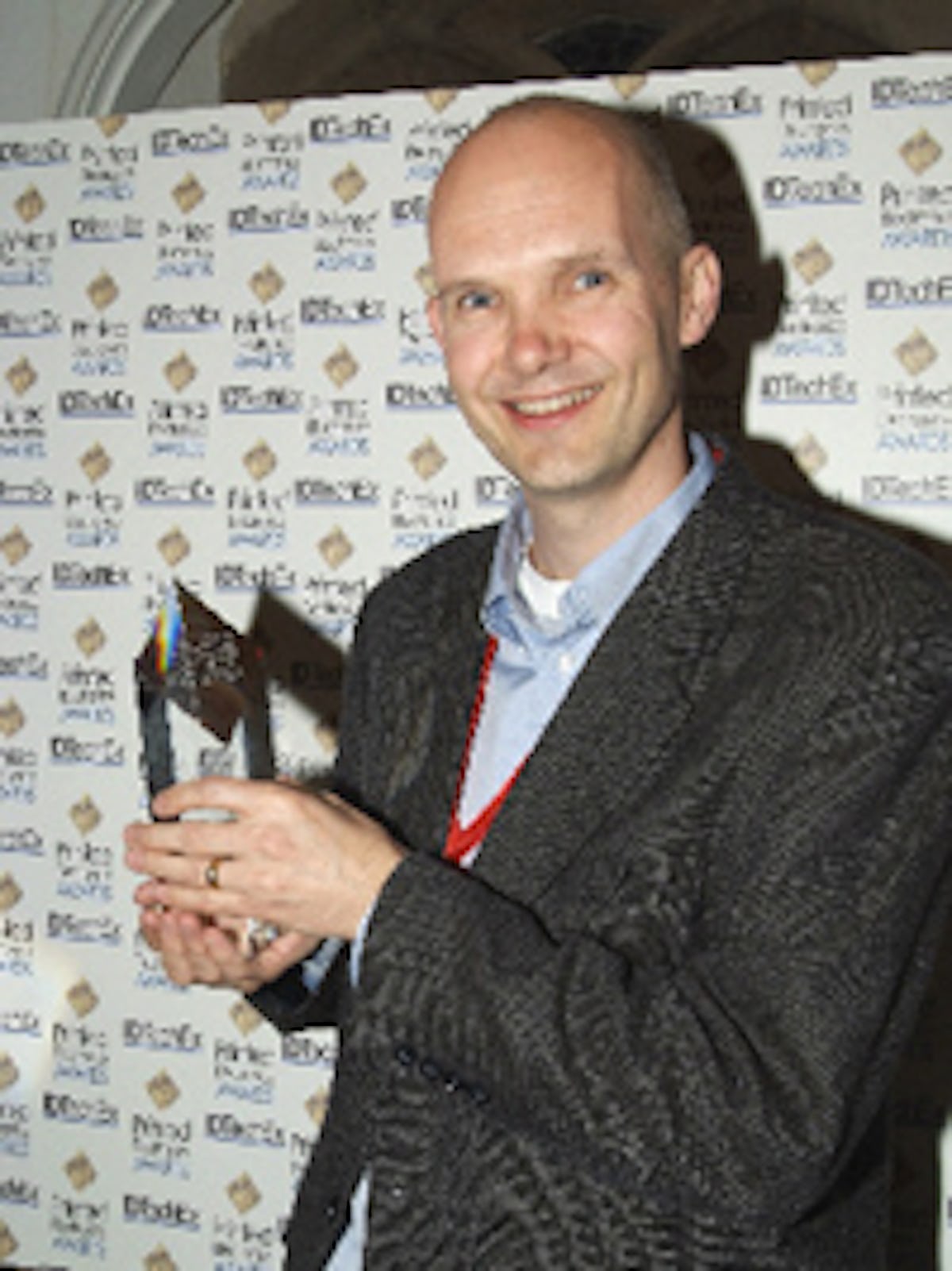 Organic semiconductors OSC currently being commercialised with not much more than 0.1 cm2/V-sec mobility - a low number compared with the needs of the marketplace, for example, for higher frequencies of operation of printed transistors. Consequently, rapid commercialisation of printed electronic applications has been inhibited by the continuing lack of availability of a semiconducting polymer that, when printed from solution, can combine the necessary properties of high charge carrier mobility and ambient stability along with the additional mechanical advantages of a polymer. The researchers identified the limitations of the currently available OSC materials. Through a rational molecular design strategy they developed a self-assembling crystalline polymer that achieved the desired performance criteria. These easily processable materials exhibit the highest charge mobilities demonstrated to date by a polymeric semiconductor. This work has been recognized by a number of leading researchers in the field, in particular, Dr. Alan Heeger, the Nobel Laureate. This development represents a major breakthrough in making printed electronics a reality and supports the emergence of a several billion dollar market.
The judges have been impressed by the way in which Merck, one of the most successful suppliers of printable organic semiconductors, has created a remarkable extension to its LisiconTM product line, based on the polythienothiophenes (PBTTT). These materials were designed to self-assemble into large, highly ordered, crystalline domains upon crystallization from a liquid-crystalline phase into extended, planar configurations, both of which facilitate high charge-carrier mobility. These solution-processable materials exhibit the highest charge mobilities to date for a polymeric semiconductor i.e. 3.5 cm2/V-sec, an achievement which was believed to be impossible only a few years ago. This performance is achievable from room temperature to extremely low temperatures, i.e. 7oK, indicating metallic-like performance. The relatively large crystalline domain sizes (~200 nm), on the length scale of lithographically accessible channel lengths, offer the potential for fabrication of single-crystal polymer transistors.
PBTTT outperforms the current state-of-the-art polymeric semiconductor. The well-known and characterized poly 3-hexylthiophene (P3HT), available in different qualities from several suppliers including Merck, is the most widely adopted organic semiconductor. The new material not only offers charge mobilities an order of magnitude higher than P3HT but also exhibits significant stability improvements during processing and device operation. This higher performance eases the equipment requirements and encapsulation schemes, widens the process window, allows less restrictive device designs, and most importantly, allows access to applications not previously achievable with polymeric systems. Charge mobilities equivalent to amorphous silicon, the semiconductor used in flat panel TFTs, can now be demonstrated with printable semiconducting polymers.
The judges of the awards were Dr Peter Harrop, Chairman, IDTechEx; Professor Bill Milne, Director, Centre for Advancement of Photonics & Electronics, University of Cambridge and Nicholas Colaneri, Associate Director, Flexible Display Center at Arizona State University.
Don't miss the next awards at www.idtechex.com/peUSA.