OPV unique selling points and challenges for the next decade

The first two generations of photovoltaics, wafer-based and thin film devices, have seen mass market adoption in recent years, with different technologies characterized by varying degrees of success. Crystalline silicon platforms are by far the most successful, holding over 80% of market share, but are currently characterized by low profitability. Thin films have found success in markets where large land areas are available (e.g. solar farms) or in parts of the world where weather conditions limit the power output of silicon modules (e.g. humid, hazy regions).
These first two generations are now being followed by a third, which includes dye sensitised solar cells (DSSC) and organic photovoltaics (OPV). These devices offer different attributes and are characterized by different performance metrics.
As discussed in the IDTechEx Research report "Organic Photovoltaics (OPV) 2013-2023: Technologies, Markets, Players" (www.IDTechEx.com/opv) organic photovoltaics, although potentially a disruptive technology, do not currently offer very high efficiency levels or lifetime and these characteristics limit their market uptake. On the other hand, OPVs can offer versatility in form factor, improved indoor performance and low capital expenditure for large scale manufacture.
The report discusses in detail the market trends and forecasts for growth in the next decade, as well as the main sectors that will be initial target markets for organic solar cells.
Organic PV: attributes, unique selling points and challenges
The radar chart below is comparing attributes of different PV technologies of all three generations described above. In order to draw it, module efficiency and lifetime have been normalised to 18% and 25 years respectively. Printability and flexibility of form factor are the main characteristics in which organic PV outperform competing technologies but difficulties in achieving long lifetimes and higher efficiencies pose a barrier to further adoption of the technology. 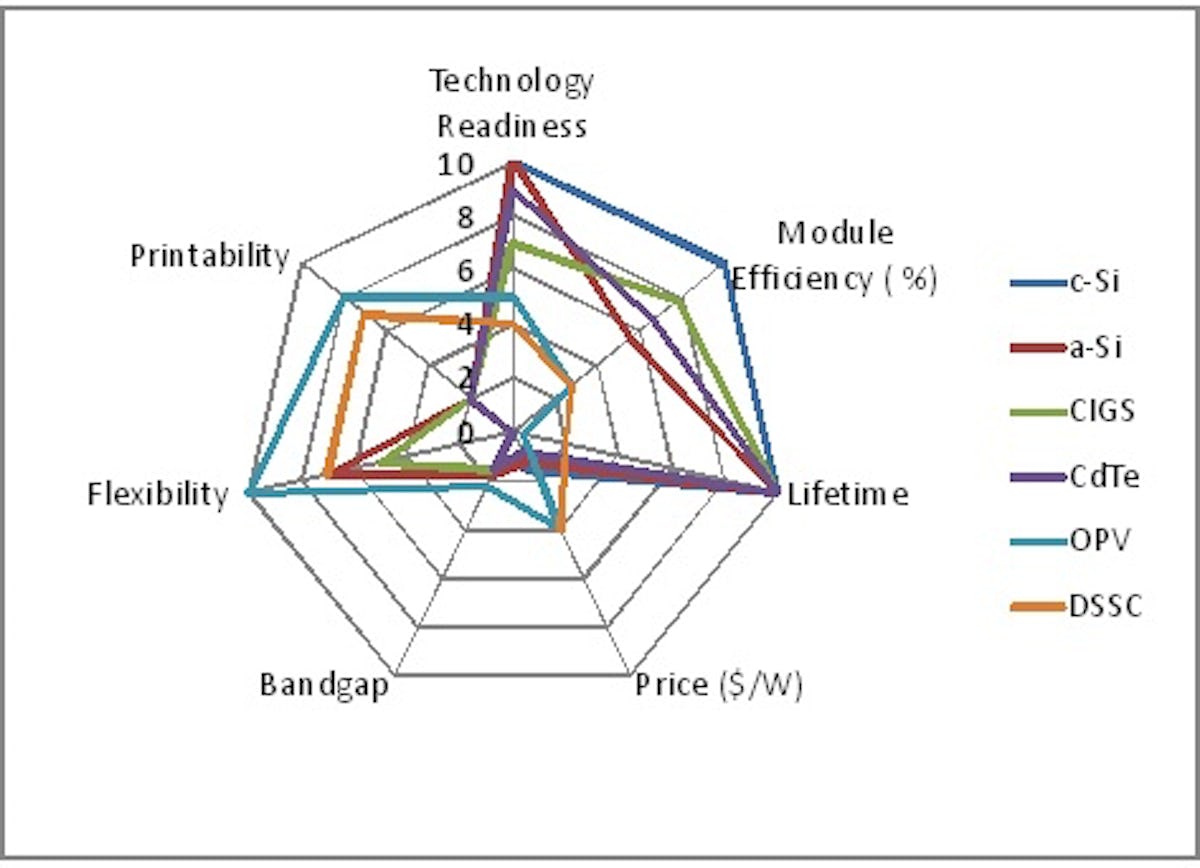 Figure 1. A radar chart comparing attributes of different PV technologies. Source; IDTechEx report "Organic Photovoltaics (OPV) 2013-2023: Technologies, Markets, Players" (www.IDTechEx.com/opv)
Based on our extensive interviews with players across the industry, including academics, manufacturers and potential end users, we have developed roadmaps tracing yearly developments in efficiency, lifetime and cost levels of organic photovoltaics. These figures are all included in detail in the complete report with some of the main performance characteristics discussed below.
I. Efficiency: We anticipate that the efficiency levels are likely to remain under 10% in the next 5-8 years, even in tandem-cell modules. Our analysis suggests that no breakthrough in technology will occur and improvements take place slowly and linearly in time. This holds true in spite of the fact that a diverse range of active materials can be envisioned and synthesised for use in OPV cells. This means that OPVs will struggle to outperform more established technologies of today. As a conclusion, breaking the 10% barrier in module performance is not anticipated before 2022-2023.
II. Lifetime: OPV device performance degrades severely when exposed to ambient moisture and oxygen. The net effect typically is that OPV cells die within days if not encapsulated while lifetime remains on the order of 2-3 years when passivated using existing flexible encapsulation solutions. Rigid glass encapsulation (such as float glass for instance) allows for 10+ years lifetimes to be achieved but of course, it compromises the attributes of flexibility in form factor.
There is currently active R&D for developing flexible barriers with sufficient performance, solutions are explored based both on plastic substrates with transparent inorganic layers deposited on them (3M, Toppan, etc,) and on thin flexible glass developed by major glass companies such as Schott, Corning or NEG. Although able to reach adequate performance characteristic none of the current techniques offer favourable price points.
Putting together a roadmap based on our understanding of the industry and announced lifetimes of organic PV cells from major developers, we have included three different scenarios:
a. Interest in OPVs remains limited leading to reluctance from barrier companies to invest further. In this scenario, high performance remain achievable but at prohibitive prices.
b. Highest performance barriers remain out of reach but an intermediate range of barriers become available at reasonable price points. In this scenario, the market pull stems from applications such as posters and point-of-sales, indoor consumer electronics, etc.
c. The market pull is strong, leading to large-scale investment in barrier technology. This scenario is helped by the fact that OLEDs also suffer from a similar challenge, resulting in a synergy that pushes market demand. 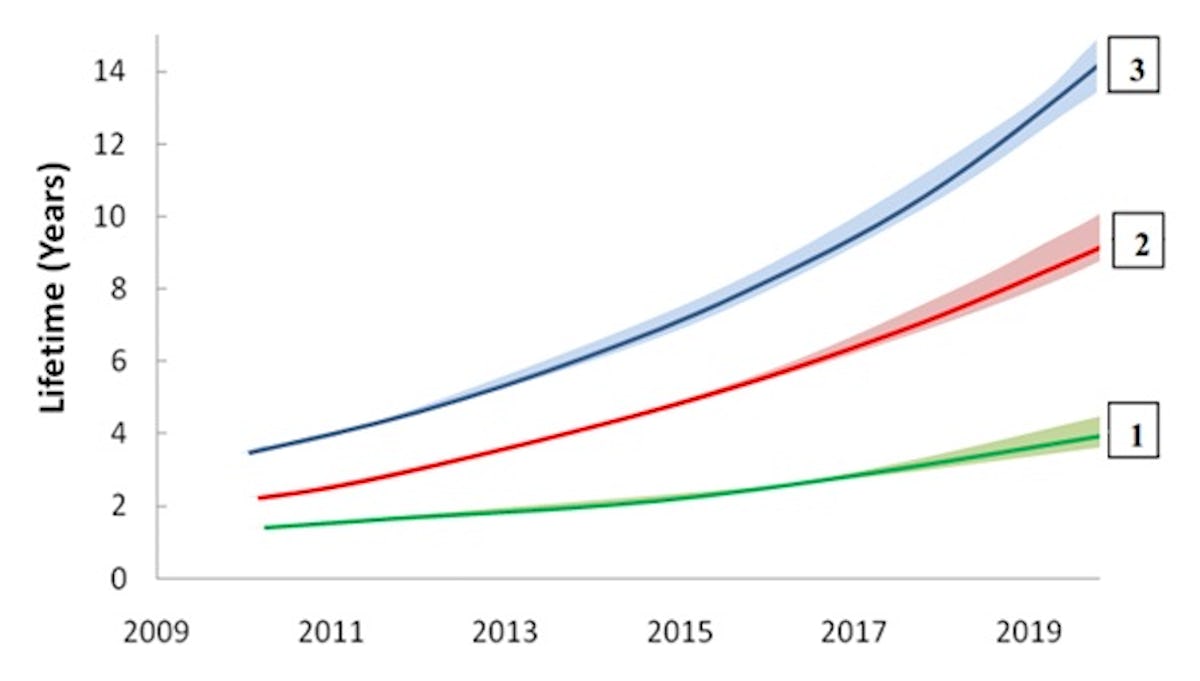 Figure 2. Extrapolated lifetime for organic photovoltaics. Forecast 2013-2019. Source and detailed analysis of predicted values: IDTechEx Research report "Organic Photovoltaics (OPV) 2013-2023: Technologies, Markets, Players" (www.IDTechEx.com/opv)
III. Cost roadmaps: The energy generation cost is the most critical aspect of a given PV technology. It largely determines the market demand and penetration. Based on potential future technology developments, we estimate a cost per watt metric, with assumptions that there won't be significant changes in factors such as:
1. the price points for transparent conductors
2. low cost encapsulation such as glass
3. small volumes of active materials due to limited market penetration
In this case, even a 6.8% efficient organic PV module would be characterized by a cost of $2.8/Watt (more detailed analysis of price points for varying efficiencies can be found in the complete report "Organic Photovoltaics (OPV) 2013-2023: Technologies, Markets, Players", www.IDTechEx.com/opv)
Based on the above analysis of efficiency, lifetime and cost developments in the next ten years, we are expecting OPVs to initially serve niche markets. As a result the overall value is expected to remain smaller than $87 million in 2023 and the total installed capacity in 2023 at <74 MW. These are not large values considering that the total installed PV capacity in 2011 was 23-24 GW. Therefore, organic PV will remain a small market with approximately 1% total market share.
For more information also attend Printed Electronics Europe (www.printedelectronicseurope.com