Scientists from Imperial College London, working at the Institut Laue-Langevin, have presented a new way of positioning nanoparticles in plastics, with important applications in the production of coatings and photovoltaic material that harvest energy from the sun. The study, presented in Advanced Materials (cover article), used neutrons to understand the role that light - even ambient light - plays in the stabilisation of these notoriously unstable thin films. As a proof of concept the team have shown how the combination of heat and low intensity visible and UV light could in future be used as a precise, low cost tool for 3D printing of self-assembling, thin-film circuits on these films.

Polymer solar cells are of significant interest for low power electronics such as autonomous wireless sensor networks to monitor everything from ocean temperature to stress inside a car engine. In these solar cells, fullerene-polymer mixtures are particularly appealing because they are lightweight, inexpensive to make, flexible, customisable on the molecular level, and relatively environmentally friendly. However they are currently characterized by low efficiencies and unstabilities that compromise their lifetime.
In order to improve science's understanding of the dynamics of these systems and therefore their operational performance, the team carried out neutron reflectometry experiments at the ILL, a non-destructive technique that allows you to 'shave' layers off these thin films to look at what happens to the fullerene and the polymers separately, at atomic scale resolution, throughout their depth.
Whilst previous theories suggested that thin film stabilisation was linked to the formation of an expelled fullerene nanoparticle layer at the substrate interface, neutron reflectometry experiments showed that the fullerenes remain evenly distributed throughout the layer. Instead, the team revealed that the stabilisation of the films was caused by a form of photo-crosslinking of the fullerenes. The process imparts greater structural integrity to films, which means that ultrathin films, (down to 10000 times smaller than a human hair) readily become stable with trace amounts of fullerene.
The implications of this finding are significant particularly in the potential to create much thinner plastic devices (thus using smaller amounts of material which minimises their environmental impact) that remain stable. Thinner devices would also allow for shorter distances that carriers would have to travel in order to be collected at the electrodes, which, in the case of polymer solar cells is in the range of 10-20nm. Achieving structural features with such levels of accuracy would lead to increased efficiency and lifetime.
The light sensitivity also suggests a unique and simple tool for imparting patterns and designs onto these notoriously unstable films. As a proof of concept the team used a photomask to spatially control the distribution of light and added heat. The combination causes the fullerenes to self-assemble into well-defined connected and disconnected patterns, on demand, simply by heating the film until it starts to soften. This results in spontaneous topography and may form the basis of a low cost tool for 3D printing of thin film circuits. 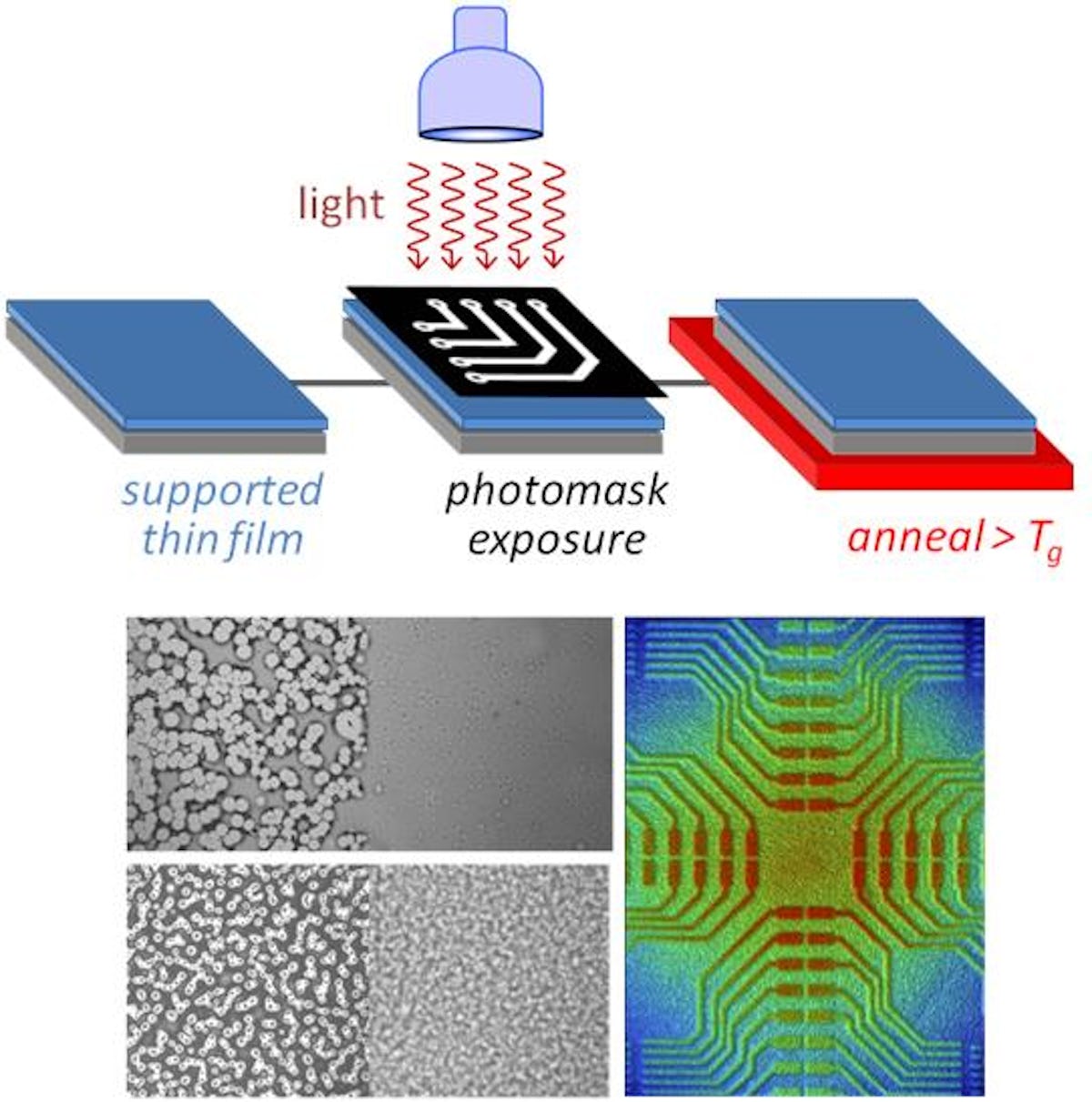 Use of photo masking to spatially control the distribution of light and added heat as a proof of concept for a new patterning technique.
Dr Joao Cabral, Imperial College London said: "Using just light we can ask specific parts of the film to segregate or connect, stabilise and function for photovoltaic purposes. After this it is not difficult to create on-demand, self-assembling complex patterns on these films by the simple addition of heat. If replicated for more complex compositions, this would represent a major advance in their commercial application in electronics as well as in energy harvesting of low power sources."
Other potential applications could include patterning of sensors or biomedical scaffolds. In the future, the research the team are looking to translate their findings to conjugated polymers and fullerene derivatives, more common in commercial films, and industrial thin film coatings.
Top image: Wikipedia
For more read Energy Harvesting and Storage for Electronic Devices 2012-2022
And attend Energy Harvesting & Storage USA 20-21 November 2013, Santa Clara, USA
Printed Electronics Asia, Tokyo, Japan, 9-10 July 2013.
Printed Electronics USA, Santa Clara, California 20-21 November 2013