The market for dye sensitized solar cells (DSSCs) is forecasted to slowly grow to over $130 million by 2023 according to market research company IDTechEx, as discussed extensively in the newly published report Dye Sensitized Solar Cells (DSSC/DSC) 2013-2023: Technologies, Markets, Players.
Although initial products are aimed towards indoor, portable applications such as solar chargers, solar bags and solar wireless keyboards, the end game for DSSCs is the ability to have these largely inexpensive solar cells incorporated into a wider variety of product offering, including larger installations. For that purpose, development work is being undertaken in order to produce prototypes and demonstrators of DSSCs being utilised in applications such as bus shelters, steel roofing and others such as facades, semi-transparent windows etc.
As can be seen from the chart below, in the next few years applications for portable electronics will remain the most popular application in which DSSCs will be deployed but in later years the scene is going to change. A larger share will be taken over by applications such as smart labels, the currently nascent sector of energy harvesting for wireless sensor networks as well as applications in photovoltaics (PV) for developing countries and building integrated solutions. As described in more detail in the report, mobile electronics and automotive integration will remain limited, mainly due to the power output demands for these demanding but also cost-sensitive market segments. 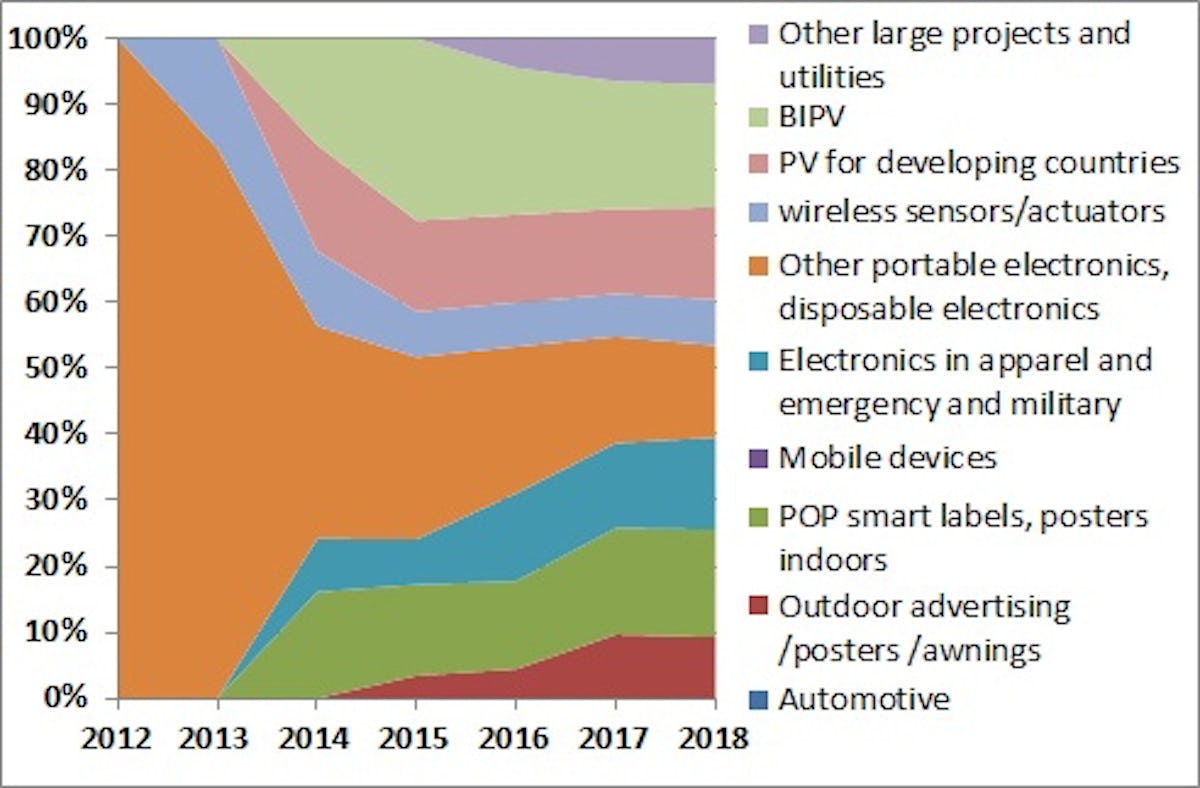 ~Figure 1. DSSC market division by application to 2018. The current dominant sector of application of DSSCs is in portable electronics but it will eventually become one of several market segments in which DSSCs will penetrate in the next decade. Source: IDTechEx report Dye Sensitized Solar Cells (DSSC/DSC) 2013-2023: Technologies, Markets, Players.
Companies in the value chain: Established players and new entrants
The difficulties in the PV industry in recent years have had their impact on dye sensitized solar cells; the slow growth of the market for the technology being testimony to the effects of the PV industry slowdown. With DSSC technology being part of a third generation of PV devices the market conditions have been especially challenging.
Regardless of this fact, there has been activity that showcases that developments in the DSSC industry are continuing: established companies such as Dyesol continue their work on large scale installations in collaboration with Tata Steel in North Wales, UK. G24 Innovations, after going into administration a few months ago is now under new management and has renamed itself G24i Power, continuing their commercialization efforts. NLAB has also been revamped and is now called Exeger and having received a US$20 million dollar investment is proceeding with building a 20MW production line in Stockholm, Sweden, in which they will further develop their DSSCs incorporating their proprietary 1DPC (1-dimensional photonic crystal) technology.
Earlier in the value chain Solaronix is still one of the best established materials providers for DSSCs but is also currently involved in the manufacture of DSSC modules, which will be utilized in a façade commissioned by the EPFL in Lausanne, planned to be completed at the end of 2013. As a newer entrant, Dyenamo of Sweden is focusing on developing innovative material solutions but also offers design and integration services, "samples on demand" as well as consultancy services to their customers.
Finally, it's not just European companies pushing ahead with DSSC developments. Although multinational giants Sharp and Sony seem to be winding down their DSSC operations and are focusing on other products, Nissha Printing in Japan is actively engaged with further developing its proprietary EneLEAF™ DSSC technology, while CSIRO in Australia recently became part of a consortium that has been given funding for an US$80 million, 8 year project to create a joint Australia-USA research centre on Advanced Photovoltaics. The lead partner is the University of New South Wales but it includes all of the major research groups working on PV in Australia. 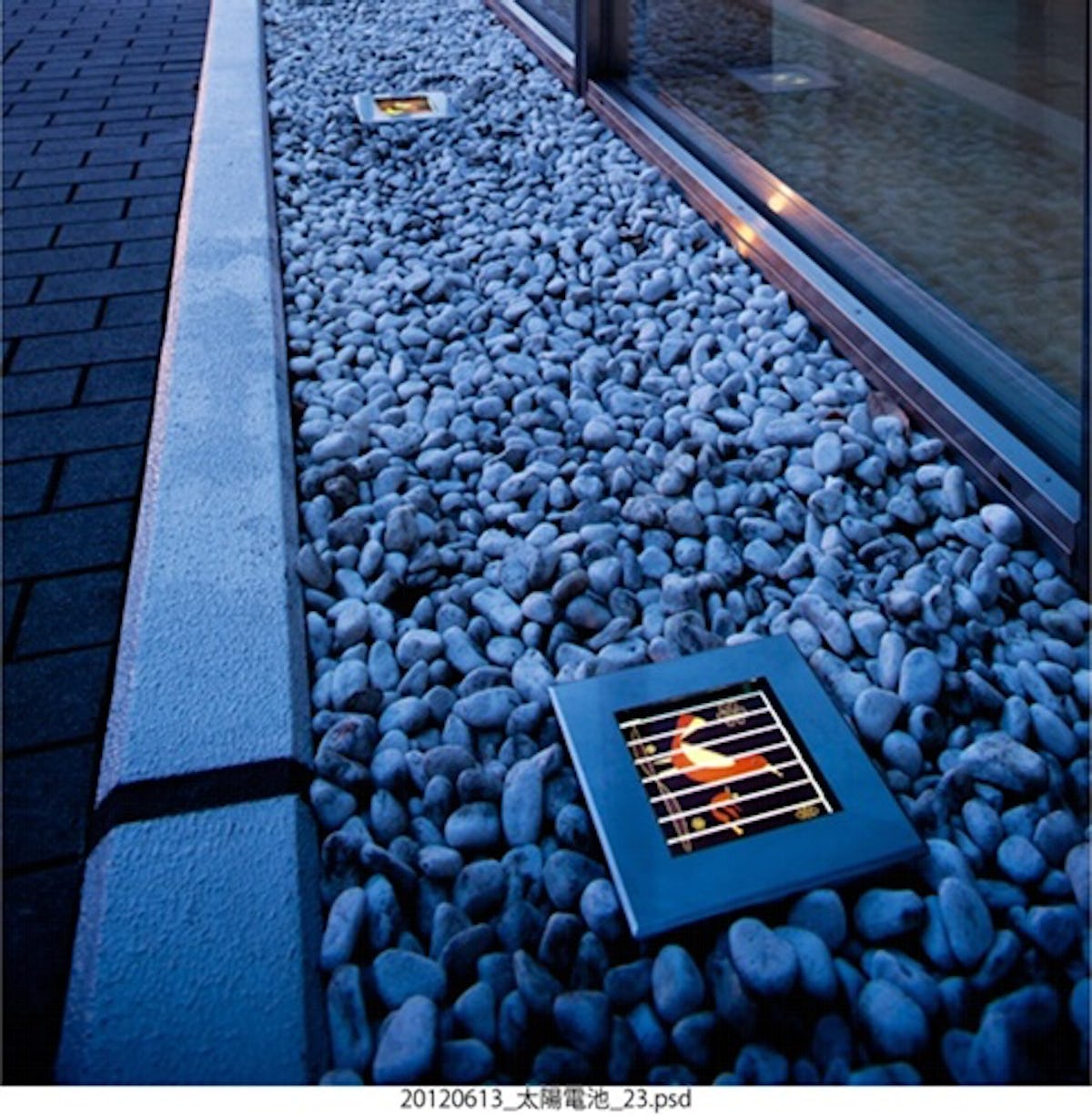 Figure 2. Nissha's Akarie solar lamp, incorporating the company's EneLEAF™ technology. Source: Nissha Printing
Detailed market forecasts, as well as more detailed profiles and information on the above, and many other DSSC companies can be found in the IDTechEx Research report covering the market for dye sensitized solar cells and their applications: Dye Sensitized Solar Cells (DSSC/DSC) 2013-2023: Technologies, Markets, Players.