Alicia Liedtke and Mary O'Neill of the Department of Physics, University of Hull in the UK and Stuart Kitney, Anke Werthmoeller and Stephen Kelly of the Department of Chemistry of the same university have invented a new form of white light OLED (WOLED).
White-light Organic Light-Emitting Diodes (WOLEDs) are being intensively developed as backlights for Liquid Crystal Displays (LCDs) as well as for solid state lighting. WOLEDs using either small molecules or polymers have been reported in many different configurations, most of them employing blends of different components. High doping concentration results in phase separation and quenching, which can limit device performance and colour stability.
We report WOLEDs using a completely different class of organic materials: a combination of electroluminescent liquid crystals and polymer networks. Binary mixtures of new blue-green and red liquid crystalline monomers (reactive mesogens, RMs) are deposited from solution by spincoating on the substrate surface and then photopolymerising to form highly crosslinked and insoluble EL polymer networks. The EL emission spectrum is broad and covers most of the visible spectrum. It does not vary with applied voltage as often occurs for mixtures of small molecules and polymers. The liquid crystalline nature of the polymer network also allows polarised white-light electroluminescence to be demonstrated for the first time. Polarised white-light emission is essential for brighter, more efficient and low-cost LCDs using one polariser instead of two, for example for mobile phones. 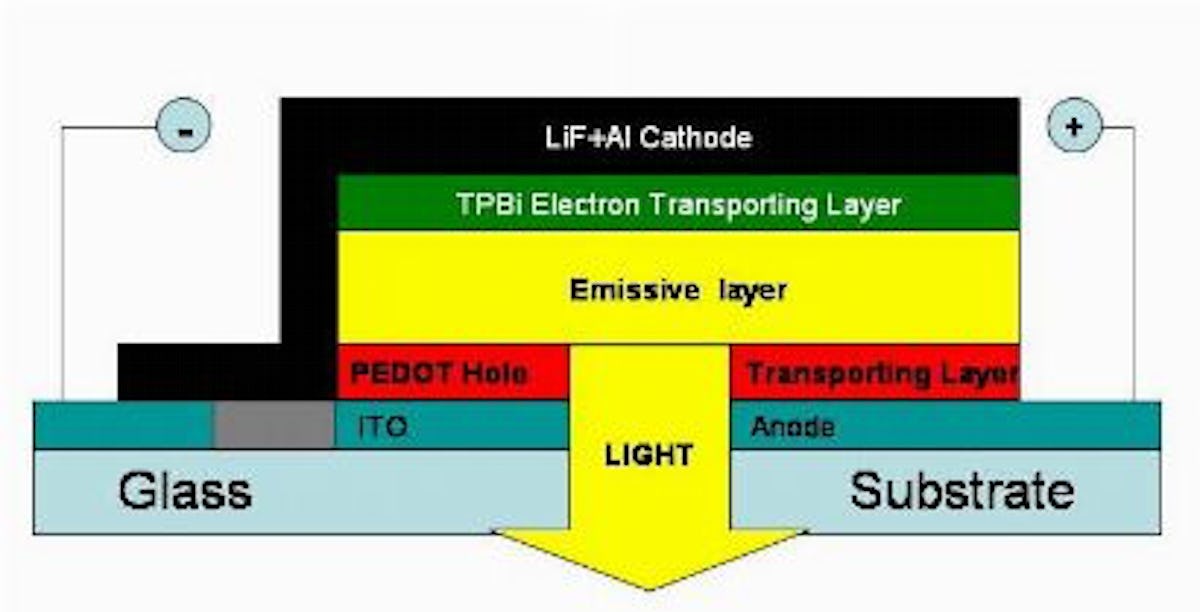 Device Preparation:
OLEDs of the structure shown above were fabricated on a glass substrate covered with an indium tin oxide (ITO) transparent anode and polystyrene sulphonate/polyethylene dioxythiophene (PDOT), which is deposited by spin-coating. The PDOT layer was baked at 165 ºC for 10 minutes and rubbed afterwards. A thin film of a mixture of the light-emitting materials C1 (12%) and C2 (88%) as specified above was prepared by spin coating from a 1% weight solution in toluene followed by baking at 120 ºC. The film was crosslinked by UV irradiation using a HeCd laser at 325 nm at a fluence of 400 Jcm-2 to render it completely insoluble. A hole-blocking layer of tri(phenyl-2-benzimidazolyl)benzene (TPBi, 10-15 nm) was deposited on top of the emission layer by vapour deposition. Layers of lithium fluoride (0.6 nm) and aluminium (80 nm) were sequentially deposited in the same chamber as a combined cathode.
They reported these advances at the Nanomaterials Conference in Newcastle Gateshead UK on May 1.