Paper as an alternative to PET/PEN for lower device cost

IDTechEx recently visited Arjowiggins near Lyon in France. Arjowiggins is a private company with origins dating back to 1761. It has 25 production facilities and generated €1.5 billion sales in 2011. Its subsidiary Arjowiggins Creative Papers launched their "PowerCoat®" product in late 2012, offering a paper substrate specially adapted for printed electronics devices.
PowerCoat® is a cellulosic paper formulation and coating process which can be used as a substrate for printed electronics devices. Compared to coated papers, it is extremely smooth (as low as 10 nanometer surface variation), reduces the absorption of the printed ink, can work with printing features of resolution down to 5 microns, and is 100% recyclable, biodegradable and FSC certified.

Compared to polyester based substrates which destabilize from around 120 degrees Celsius, PowerCoat® sees almost no destabilization at temperatures exceeding 220 degrees Celsius. This means that higher sintering temperatures can be used, so the same amount of ink can achieve higher conductivity versus a lower temperature sinter on PET - or, the same conductivity can be achieved using less ink, therefore reducing the amount spent on ink - potentially as much as using 10 times less ink.
The surface resistance of different substrates as a function of sintering temperature for silver inkjet-printed squares of 1.5 micron thickness is shown in the following image 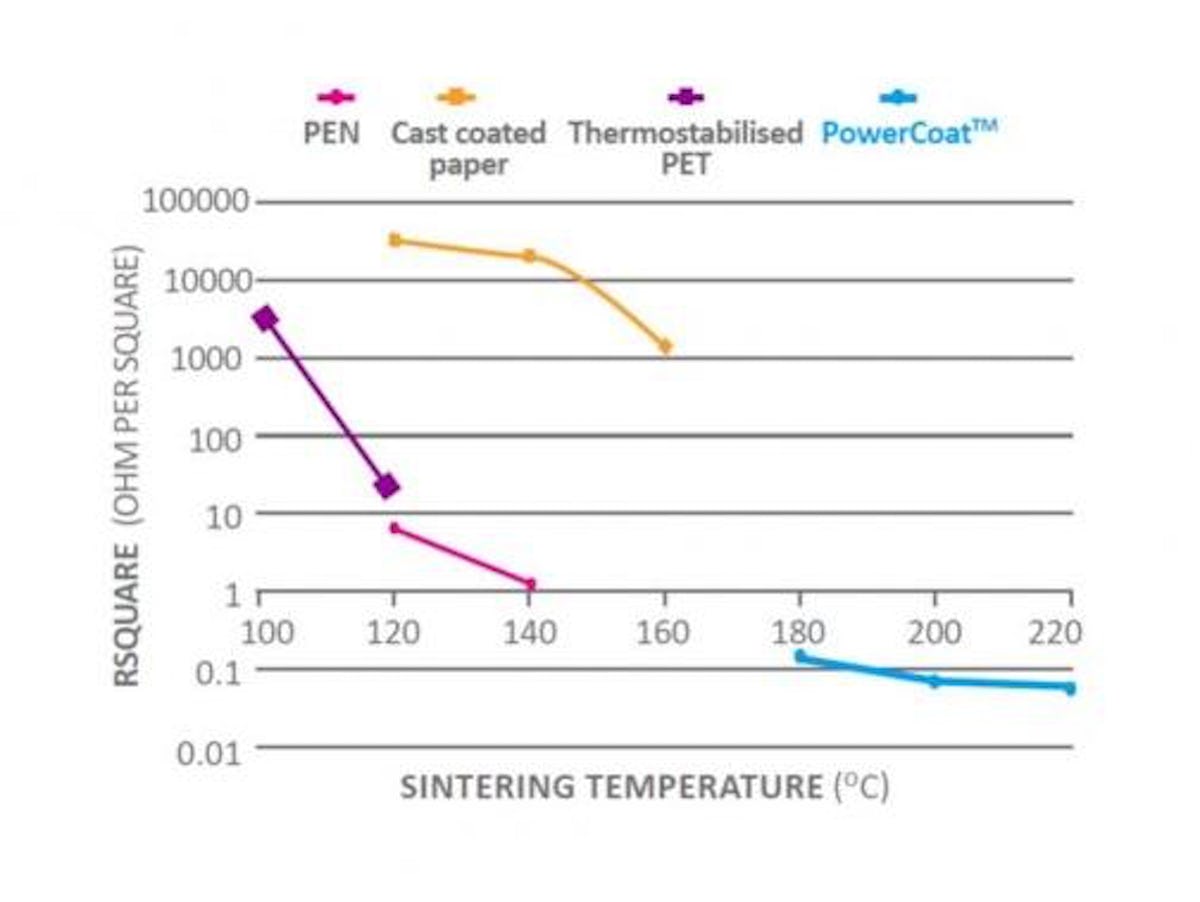 Source: Arjowiggins Creative Papers
The ink saving offsets the higher cost of PowerCoat® versus PET (which can come down to €6/sqm dependent on volume), resulting in the overall device (printed, sintered ink on substrate) being 15-30% cheaper for the same conductivity, using PowerCoat® as the substrate versus a polyester film.
The material can withstand laser ablation processes, and it also has a lower bulk density than common plastic substrates, meaning that it can be lower weight.
Arjowiggins Creative Papers intends to sell the PowerCoat® paper substrate to be used in a range of applications, including RFID tag antennas (particularly ticketing - which will demand 600 million RF tickets this year based on IDTechEx research), smart packaging (such as NFC and tamper evidence), capacitive switching, sensors and a wide range of other applications.
Arjowiggins Creative Papers' advanced Research & Development capabilities allow for the development of different variations of the PowerCoat® product in line with specific client requirements such as the adaptation of performance to a particular printing process (HD Inkjet, Screen, Flexo,...) and or/applications.
For more information visit www.powercoatpaper.com