In April 2007, Linkoping University in Sweden announced a 1.5 volt transistor printed on woven fabric. Researchers coated fibres with PEDOT organic conductor and stuck them together with an electrolyte to produce a poorly performing transistor, with slow response. Most other work on fabric transistors and other electronics involves building up the whole device axially on the fibre rather than printing it to operate between fibres.
The New Scientist reports that Olle Inganas and his team at Linkoping University in Sweden have produced fabric in which the fibres themselves act as the components of a transistor. To make it Inganas coated fibres in the conductive polymer PEDOT or poly(3,4-ethylenedioxythiophene). He then took two of the resulting conducting fibres and stuck them together with an electrolyte. Applying a voltage to one fibre causes the electrolyte to react with the polymer coating the second fibre, switching it from a high to a low-conductivity state - making the fibres and electrolyte act as a simple transistor (Nature Materials, DOI:10.1038/nmat1884). Using conducting and insulating adhesives, these transistors can be connected to form a variety of circuits.
IDTechEx notes that many organizations are researching woven electronics.
The US Department of Defense has the objective of reducing the weight of the warfighter's back pack by two thirds in the next few years. That can only be achieved by printed and thin film electronics where, for example, the tent that is carried is also an antenna and a photovoltaic power source and the back pack generates its own power and the apparel stores power, monitors vital signs and performs electronic functions such as being a radio and electrical functions such as being self cooling and self heating according to monitored need.
Smartly Dressed
A period of the 90's fashion craze focussed on clothing which changed colour with body heat - based on a time temperature ink. It died out as these fashion trends naturally do and when people realised that it wasn't so great to show where you were sweating. But now with the emerging range of nanotechnologies are useful applications of wearable electronics, such as clothing which dispense medication based on sensed need (iontophoresis), shirts with radios and music players embedded into them, suits for camouflage and coats with displays carrying weather forecasts.
Designer Electronics
In July 2004 France Telecom incorporated a wireless display slipped into the chest pockets of garments created by a fashion designer. In a promotional video shoot, a woman smiles as the display in her chest pocket carries a flashing red heart.
Maggie Orth at International Fashion Machines produces textiles that are screens. Their 'Electric Plaid' is a weave of conductive and resistive material coated with ink that changes colour based on its temperature (like the clothing mentioned above). As low voltages are passed through the fibres, they are warmed and the colour changes.
Building Transistors Directly onto Fibres
Vivek Subramanian from the University of California Berkeley has demonstrated building transistors onto fibers. The transistors were formed at the cross section of fibres using an additive process (i.e. not etching away patterns). The textile could be curved to the equivalent of a 15 centimeter cylinder, and using a more flexible organic insulator would allow more flexibility.
The Organic Electronics group at UC Berkeley also talk of adaptive circuits - if you tear a piece of cloth not all functionality is lost because the circuit adapts around the route. The adaptivity of the internet comes to shirts.
Some organizations developing wearable electronics are shown in the table below: 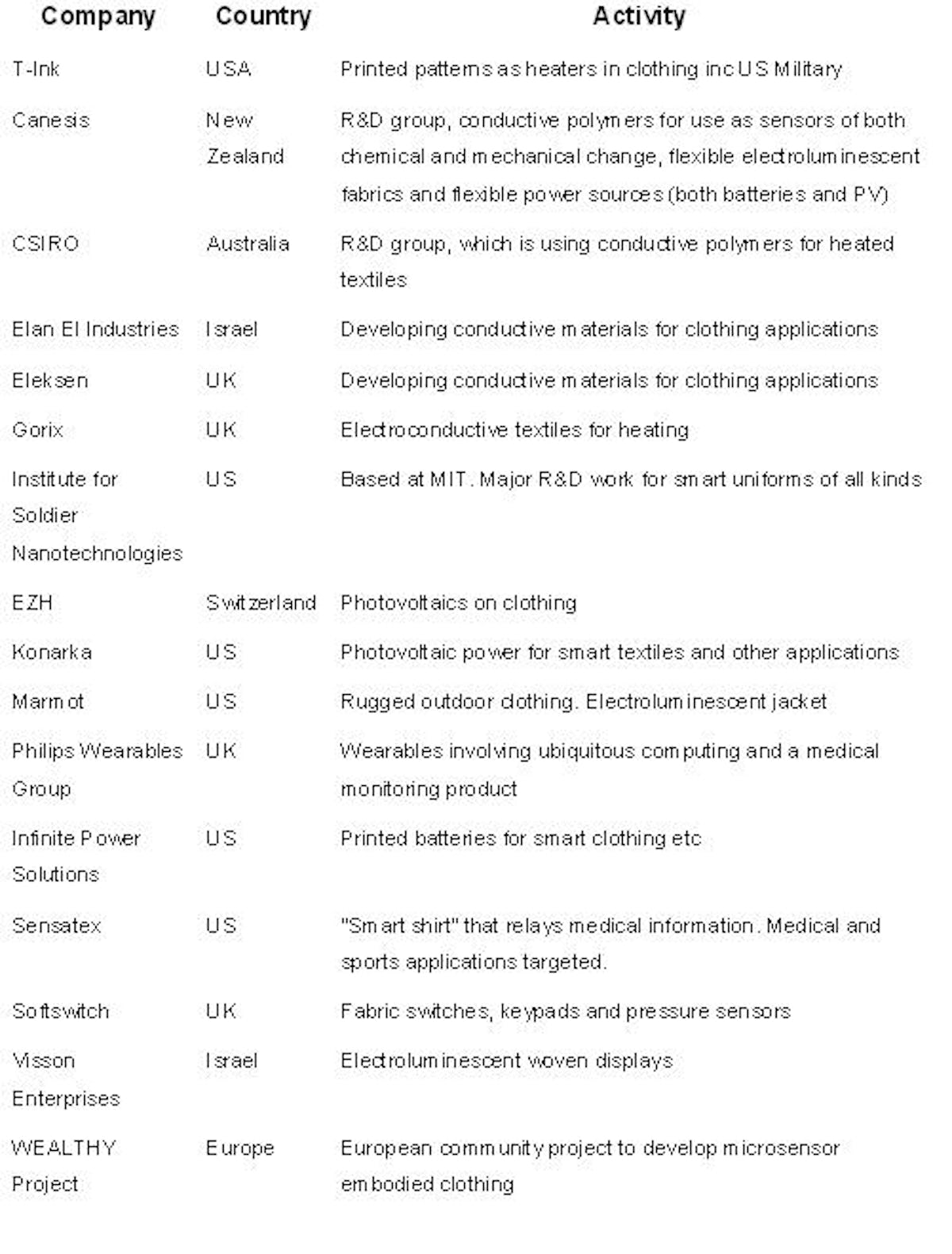