Most of the thousand or more participants in printed electronics are attempting incremental improvements to existing products and missing the big picture. For example, faced with heavy losses on Liquid Crystal Displays LCD displays because of over capacity, many are investing hundreds of millions of dollars in Organic Light Emitting Displays OLEDs with slightly better performance but still a rigid glass structure and minimal printing. This is rarely profitable either, as these displays are applied to the very price competitive applications such as television and mobile telephones.
Startling New Capabilities
If we look at the big picture, we see that printed and even partially printed electronics can achieve startling new capabilities never before seen and that means totally new applications and products. It also means numbers many magnitudes higher than those seen with conventional electronics. Here are a few of them.
Some of the startling new capabilities enabled by printed electronics 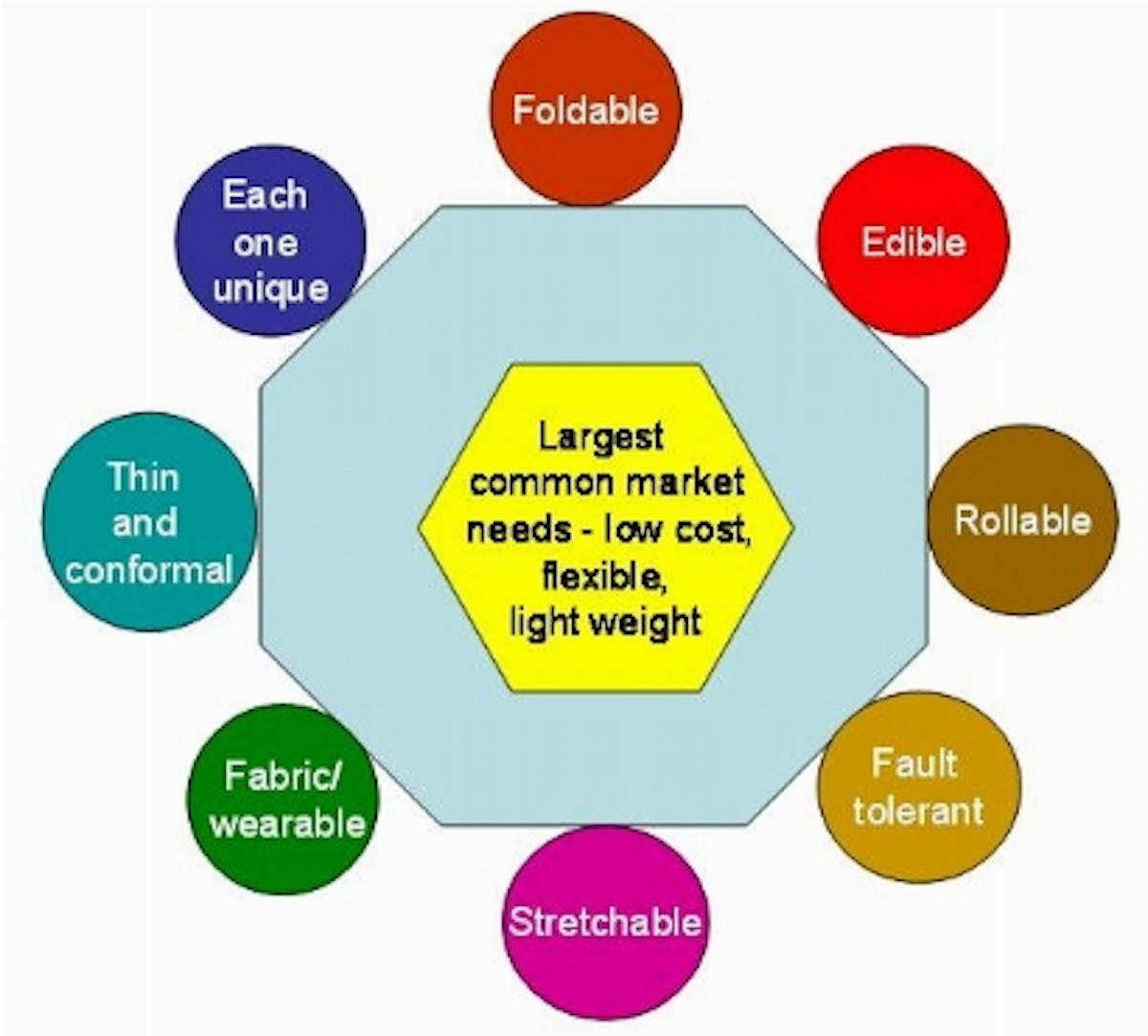 Source: Introduction to Printed Electronics IDTechEx
With ink jet printed electronics we can make every circuit unique while printing billions yearly - that means personalisation and low cost security. Foldable electronics is possible where the used package is folded into something useful or a product can fold into several modes of operation. The laptop solar power supply folds down like a pack of cards (Konarka) or the house solar power supply folds to go in the car when you buy it (Orion Solar).
Edible electronics gives food traceability and drug diagnostics (Kodak and Somark Innovations). Rollable electronics gives large screen performance with phones and PDAs (Polymer Vision) and the superior fault tolerance of printed electronics currently interests NASA. Stretchable electronics promises new packaging, medical and other concepts (Tokyo University, Nanosonic, Electromuscle) and wearable printed displays, logic and power is leading to new medical, fashion and other products pursued by over 30 organisations. Thin and conformal light-emitting AC electroluminescent displays on vehicles, buildings, in subways etc are already a huge success thanks to elumin8 and others using printed plastic film, and Quantum Paper has even demonstrated animated colour with paper billboards.
Common to most of this is the progress towards low cost, flexibility and light weight. The US Army has a project to reduce the weight of the warfighter's backpack by two thirds while making it perform many more functions. Weight reduction makes the car, military vehicle or aircraft go further on a tank of fuel and printing electrics and electronics is beginning to release more space in them thanks to T-ink and others. The US Military has a project to reduce fuel consumption by 90% to improve operational capability - the civil sector wants to do it for environmental reasons.
Talking Trillions
Conventional electronics rarely rises to the billion mark. However, here we can be talking up to trillions. For instance, there are about ten trillion barcodes printed every year in the world. Radio Frequency Identification RFID tags can never drop below a few cents as long as they have a silicon chip in them and that means they will struggle to sell at even the 50 billion level, this year's figure being only two billion despite the chip makers and tag makers incurring huge losses when they address the commodity applications. Printing can get that down to 0.1 cents and eliminate the cost of label application by printing the RFID directly onto the package or product just as 85% of barcodes are applied today.
Progress towards this for the highest volume application - consumer goods - is forecasted below.
Number of RFID tags on consumer goods 2007-2017 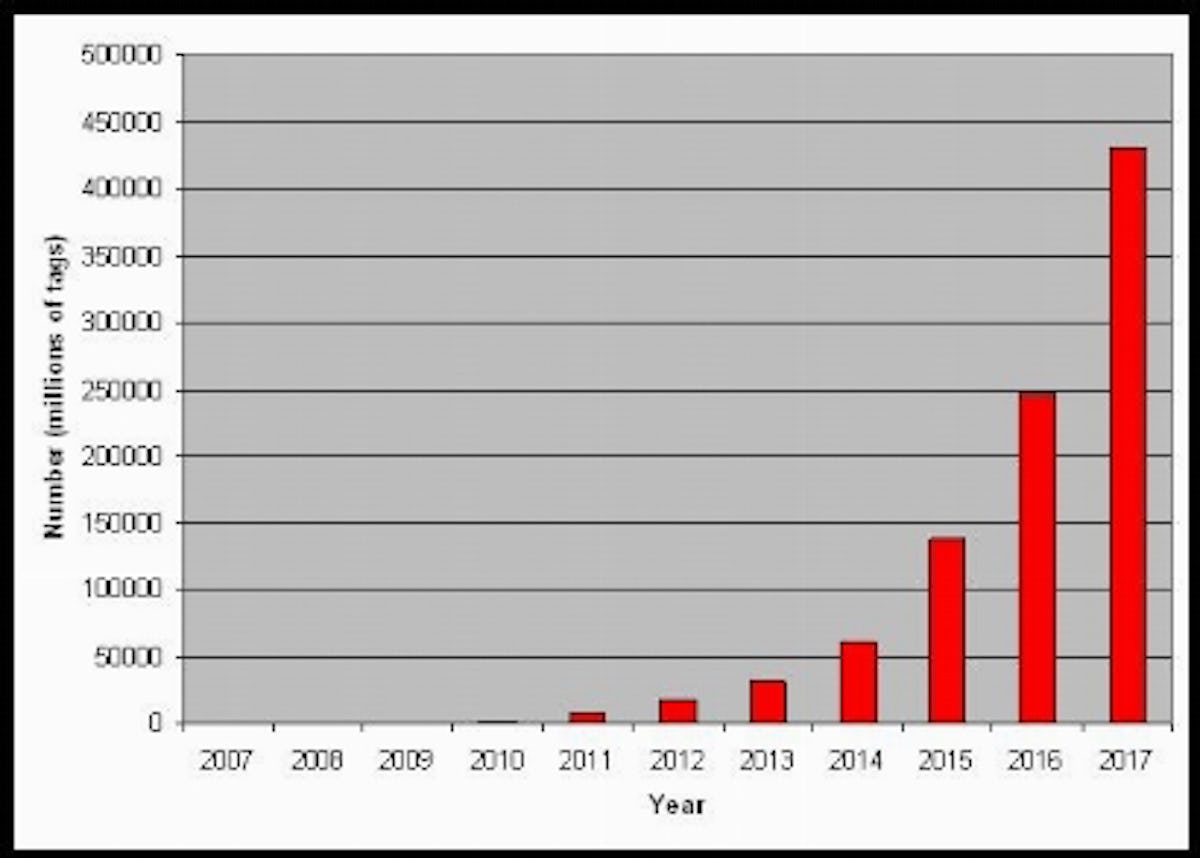 Source: RFID Forecasts, Players, Opportunities 2007-2017 IDTechEx
Cash is a matter of trillions too. The US, UK and Japan, taken together, handle two trillion dollars in cash transactions every year. Cards with printed logic and antennas will be cheap enough to manufacture and use to replace most of that, with billions of people holding them for convenience and cost reduction. Some will subsume the card in their RFID enabled mobile phone which will become paper thin and even disposable thanks to printed electronics.
Electronics By the Acre
Vast areas are in prospect too with sensor sheets and power generation, impossible to make with traditional fabrication technology. Consider just the Copper Indium Gallium diSelenide CIGS flexible photovoltaic cell. It is being commercialised by six organisations this year, from Honda Japan to Day Star Technologies in the US and Johanna Solar Technology in Germany.
Other Breakthroughs
There are many other disruptive aspects to printed electronics and many more will be discovered in the next few years by the imaginative participants. Telepathx in Australia is looking at billions of sensors on trees to monitor which will combust when - saving lives and property by use of that information. The Korean National Computerisation Agency is trialling such Ubiquitous sensor networks USN in rivers, the sea, hospitals, industrial greenhouses, buildings and elsewhere for various purposes but improved printed microbatteries, mesh wireless networks and printed logic are needed. They are coming along. For example, the new organic plastic film battery from Waseda University Japan charges in only one minute
Electronics Without Circuits
Vubiq, Inksure, ACREO, M-real and others can print electronic devices with pre-programmed digital information yet no circuit is needed other than in the remote interrogator. Smart packaging and food traceability are in their sights.
Tremendous Benefits to Society
All this will offer tremendous benefits to society from self diagnosis and treatment to new forms of merchandising, food safety and care for the elderly. The human interface will be transformed and it will start to involve smell, texture change (including reprogrammable Braille from Tokyo University), colour change, large scrolling fonts, printed voice recording and playback from paper (Toppan Printing) and reprogrammable books, newspapers, posters and signage (Tainjin Jinke Electronics in China, Toshiba and Sony in Japan, Prime View International in Taiwan).
While sales of flexible OLEDs have scarcely begun, sales of flexible electrophoretic displays, that need no electricity until the image is changed, are rocketing and there may be fifty suppliers within a few years. Flexible electrophoretic displays in colour are being demonstrated and there are rapid advances in the colour performance of flexible ac electroluminescent displays as well. New display concepts are being commercialised such as liquid powder displays (Bridgestone) and electrowetting displays (Liquavista).
Enormous Effort on Printed Logic
42 organisations developing printed transistors have been analysed by IDTechEx in the new report Printed Electronics in East Asia which covers 138 organisations in printed electronics. However, there is just as much effort in the West and both organic and the newer inorganic compound semiconductors are being printed. After all, most displays go with logic but logic is not solelyt used with displays - the market for printed logic and memory will be larger than that for displays.
Bottom Line
The bottom line is that printed electronics is on target to be a $300 billion business within twenty years. It will consist of many things from printed lasers to printed fuel cells and although OLEDs have huge potential in lighting and displays, making them printed for low cost, flexible and long life is proving more difficult than was previously anticipated so a shakeout of the hundreds of putative suppliers has commenced. Potential users and suppliers of printed electronics should look at the big picture, where prosperous, rapidly growing applications, including totally new concepts, are commonplace. The chemistry and physics is also changing rapidly to facilitate these advances, such as quantum dots of inorganic compounds, carbon nanotube composites, printing of nano silicon, new polymeric inks, active laminates to make light emitting displays work in bright sunlight. Many will be made on top of each other, giving a thinner device with smaller footprint than is possible with conventional electronics. Often that will be at one hundredth of the cost. The list goes on and on. Pay attention. The world is changing before your very eyes.
The World's largest event on Printed Electronics will take place this year in San Francisco on November 12-15, with over 500 delegates, 100 speakers and 50 exhibitors. Key industry participants from all over the world will be there - will you? See www.idtechex.com/peUSA for details. Register early and save.