The nascent printed electronics industry is hooked on rare metals and it is doing too little to escape from its fatal addiction. When a precious metal such as silver is used in cutlery it is straightforward to recycle it. Not so if it is in some gimmick on a cornflake packet or forming part of an RFID antenna in an entry ticket. Silver is now being offered in medical dressings as a biocide - it kills bacteria when in colloidal or nano form. This is a reminder that it should not pass to landfill sites where it can inhibit the decay process. However, we are not yet in the phase of rapid increase in the price of silver as supplies run out.
Indium
Indium is three times as abundant as silver in the earth's crust but relatively difficult to extract. Indium is used for
The printed electronics industry has added (or will shortly add) the following:
Indium prices peaked recently but they are highly likely to rise in the medium term and shortages cannot be ruled out. The association of indium with zinc production from sphalerite causes the commercial availability of new indium stocks to be 100% dependent upon the mining of sphalerite. This makes it very hard to increase the production of indium when demand for zinc is low. Fortunately, the current demand for zinc is strong and that should support a steady indium supply in the short term. 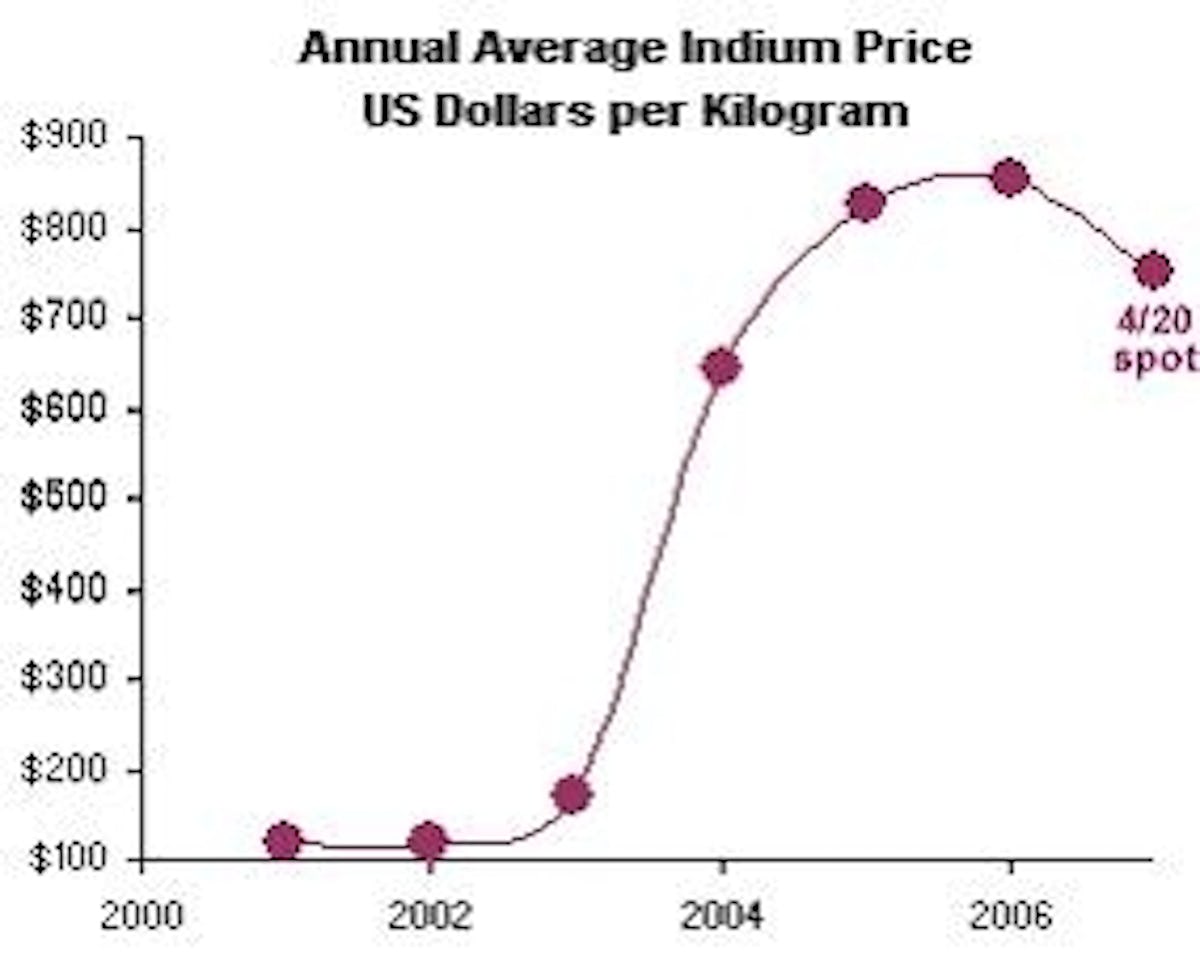 Data from USGS Mineral Commodity
Although most of the indium crustal reserves are in Canada, most production is in China, where large amounts will be needed for its unrivalled manufacturing industry. Protected sources of this key raw material can confer trading advantage on China and Japan.

Source: Industry
Rare Earths
The use of rare earths and other very precious elements is also on the increase. Ironically, it is the so-called organic electronics industry that is a major culprit as it is with ITO. For example, potential OLED emitters are being sought from the lanthanide and platinum groups, europium, iridium and complexes of boron, zinc, cadmium, copper, silver, gold and aluminium.
Given that the dream for OLEDs is to see them on everything from gift cards to train tickets, toys, cornflake packets, labels and letters, where retrieval and recycling of the rare metals are highly unlikely, it is to be hoped that the work with the humbler elements will be successful.
Escape Routes
Far more work needs to be done on escape routes from the obsession with rare elements for use in disposable electronics. It is cheering that Dye Sensitised Solar Cells are proving viable and entering production because they are mainly based on titanium dioxide, a cheap and common substance used in paint. However, DSSC photovoltaics still involve a ruthenium based dye.
Currently, low cost, abundant tin oxide is adequate for the transparent electrode when they are made on glass and the European Commission TC-MAP project in 2007/8 is developing ink jet printing of tin-antimony oxide as an alternative transparent electrode material. This is still 90% tin, so cost is low. Thickness will be 10-60nm. The project is focused on plastic substrates and it is environmentally friendly, leading to an economical and flexible process. Participants include Keeling and Walker and Patterning Technologies.
A competing alternative is improved conductive plastics. Gallium sounds like a rare metal to most people but it is widely distributed in the earth's crust, more than one billion kilograms exiting in bauxite alone. Although it is used in GaAs photovoltaics, infrared diodes and high frequency transistors, quantities are small, yet we see from the above discussion that there is much scope for greater use of gallium in printed electronics.
Indeed the record for photovoltaic efficiency is currently held by Spectrolab with a GaAsGe device. If the indium price rockets, a sister technology of CIGS is copper gallium diselenide which has lower efficiency but is still promising.
Selenium
Selenium is relatively abundant but demand and supply are not always well matched. For example, it was widely used as a photoreceptor in photocopiers but organic alternatives have now taken over. It was not used in fertilizers but now it is sometimes required by law. It is popular in health supplements and electronics but will high volume electronic use appear? In general, we conclude that selenium is not likely to rise beyond tens of dollars per kilogram in the medium term and its use in place of rare metals such as gallium is to be recommended.
Quantum dots, carbon nanotubes, common compounds
Quantum dots are a longer term prospect for improved printable semiconductors, for transistors and photovoltaics, and conductors. The favoured quantum dots are based on low cost common materials Cd, Zn. S and Se. Other escape routes may be carbon nanotubes, printing silicon nanoparticle composites and fully organic photovoltaics and transistors.
Too often it seems that the more common the printed compound, the poorer its performance in a transistor, display or photovoltaic construction. There is no all-embracing fundamental reason for this and the increasingly wide use of copper doped zinc sulphide phosphor in flexible ac electroluminescent displays is just one example of how to break the obsession with putting rare elements into disposable, high volume products. When we do that we can also consign today's misleadingly called "environmental" products to the scrapheap such as compact fluorescent lighting with the mercury it contains and the even larger amount of mercury generated by power stations supplying its unnecessarily high power needs. Printed lighting will be non-poisonous and use far less power. Hopefully, it will employ little or no rare elements.
For more read Inorganic Printed and Thin Film Electronics
Attend Printed Electronics Asia 10-11 September
Source top image: www.mindat.org