Augsberg University Calculate When Our Materials Run Out - Soon

It is unusual for anyone to study the future availability of elements to be used in volume production of electronic and electrical products. However, IDTechEx returns frequently to this topic because we consider the situation to be very serious indeed.
Armin Reller, a materials chemist at the University of Augsburg in Germany, and his colleagues are among the few groups who have been investigating the problem. He estimates that we have, at best, 10 years before we run out of indium. Its impending scarcity could already be reflected in its price: in January 2003 the metal sold for around $60 per kilogram; by August 2006 the price had shot up to over $1000 per kilogram.
In its 26 May 2007 edition, the British journal New Scientist presented disturbing calculations of when many materials used in printed electronics will run out. Given the widespread use of gallium and indium in electrical and non-electrical products already, the New Scientist is particularly concerned about adding massive demand for these materials in printed and laminar photovoltaics, notably InGaAs and copper indium gallium diselenide CIGS, where IDTechEx tracks over ten organisations planning major production soon in Japan, Europe and the USA.
The New Scientist declares,
"Take the metal gallium, which along with indium is used to make indium gallium arsenide. This is the semiconducting material at the heart of a new generation of solar cells that promise to be up to twice as efficient as conventional designs. Reserves of both metals are disputed, but in a recent report René Kleijn, a chemist at Leiden University in the Netherlands, concludes that current reserves "would not allow a substantial contribution of these cells" to the future supply of solar electricity. He estimates gallium and indium will probably contribute to less than 1 per cent of all future solar cells - a limitation imposed purely by a lack of raw material."
By contrast, IDTechEx sees far less of a problem in using the new printed InGaZnO transistors because the quantities of material involved will be extremely small. Where the quantities promise to be large, as with photovoltaics, at least these large area solar cells are likely to be in only a few locations such as power stations for ac mains electricity and on buildings and it may be practicable to recycle them. Indeed, they may never wear out.
It is interesting that the consumption of iron in the USA leveled off around 1980. "This suggests there might be only so many iron bridges, buildings and cars that a member of a technologically advanced society needs," says Tom Graedel of Yale University USA. Perhaps solar cells will be the same, but not when they appear on cornflake packets, apparel and the like. That needs to be fed into business plans. However, demand for some elements does not level and that is why copper may run out in 2100.
Using figures from the US Geological Survey and two universities, The New Scientist calculates that, if predicted new technologies appear, supplies of key elements will run out as follows. 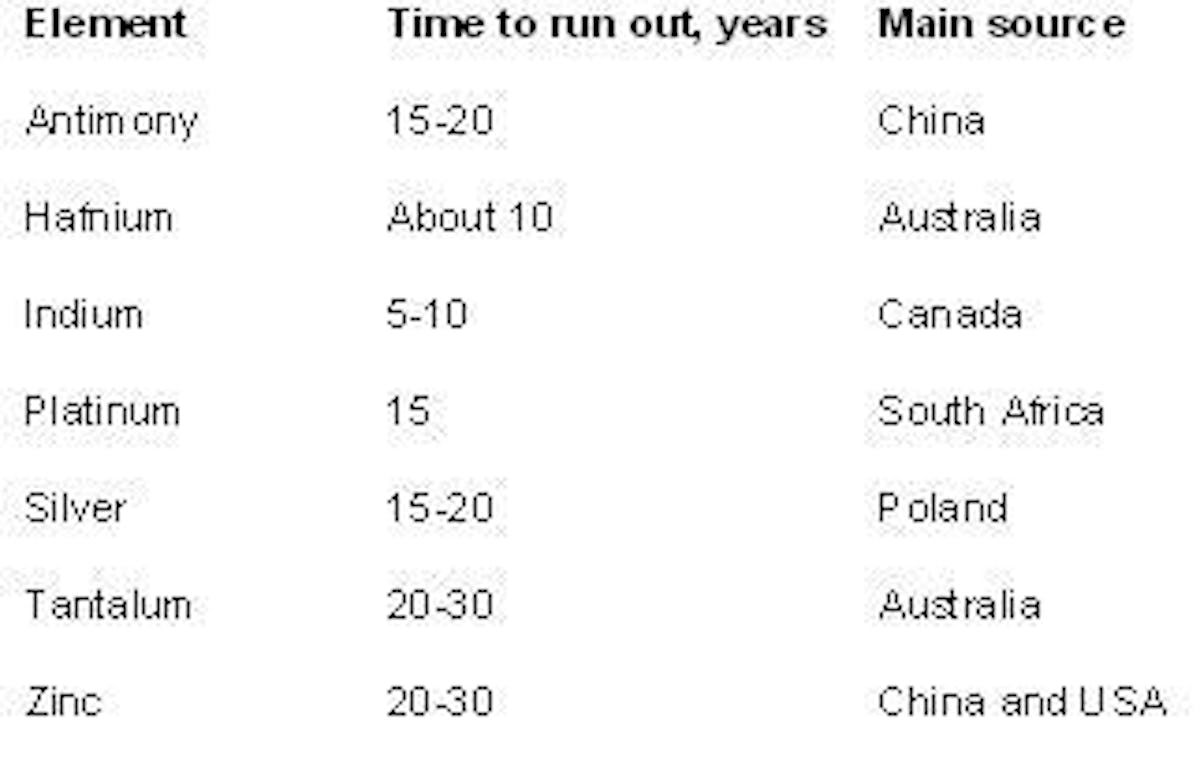 Sources of data: Armin Reller, University of Augsberg Germany, Tom Graedel, Yale University, US Geological Survey
If it is economical one day, then elements could be taken from sea water or the moon. Meanwhile, the New Scientist believes that the problem is compounded by the secrecy of the mining companies. However, if the US already imports most of its oil from politically unstable countries and 90% of its rare earth metals from China and is headed for other vulnerabilities that is its decision.
IDTechEx believes there should be much more debate about these predictions and action programs should result. At least an OECD working group is being convened in June 2007 to come up with some answers. Nevertheless, there remain huge opportunities for inorganic semiconductors and dielectrics in printed devices given their superior performance and, in many applications, modest usage of materials, provided their price does not escalate unacceptably as a consequence of imprudent volume use elsewhere.
Read the new report Inorganic Printed and Thin Film Electronics
Attend Printed Electronics USA 13-14 November San Francisco. This will be the largest conference on printed electronics in the world and there will also be an exhibition and optional Masterclasses and visits to local facilities before and after the conference - Do not settle for less.