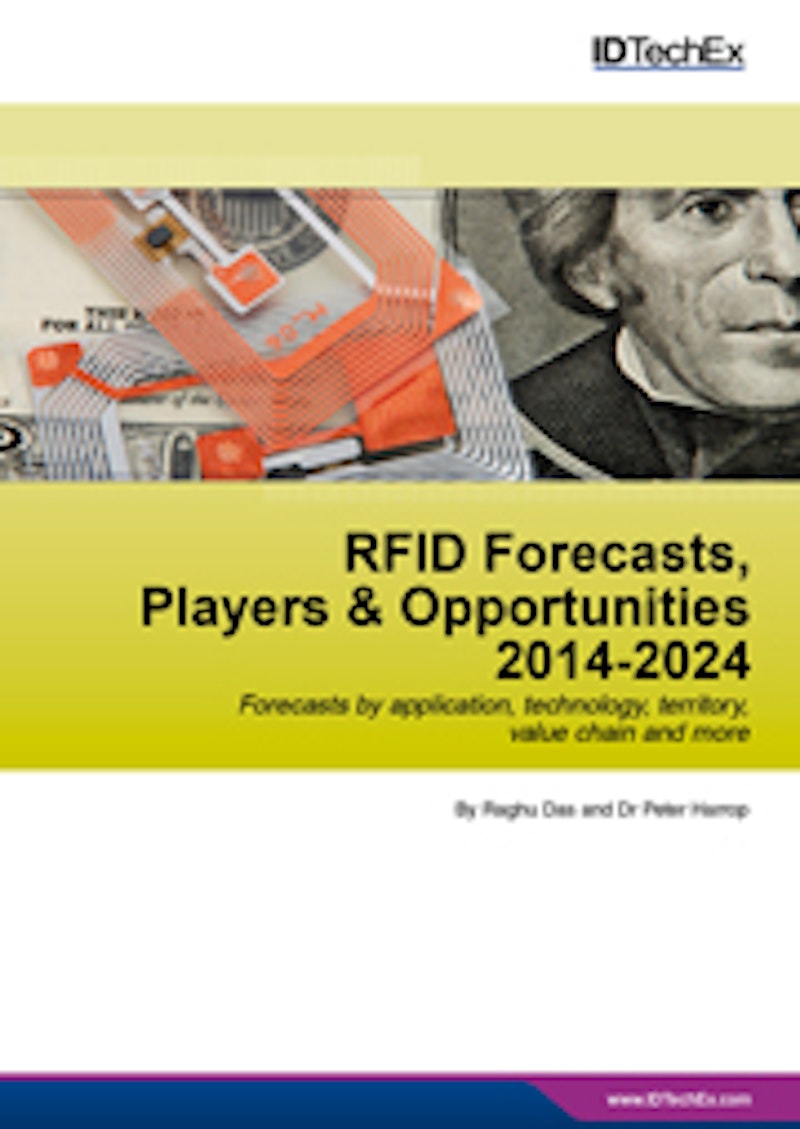 The market for RFID has grown steadily despite the economic meltdown due to the diverse nature of its applications from tagging retail apparel to transport ticketing to animals. Historically and today, Governments have driven most RFID orders as they improve efficiency (transit systems), safety (passport tagging) and protect industries (animal tagging). Since 2000 there has been a strong push to use passive RFID to improve supply chain visibility, with a wide range of investment in new RFID technologies, new standards and much publicity. Inevitably as with most new technologies, aspects were over hyped and demand not in sync with capacity, but as we entered 2010 the industry emerged from the hype cycle and over the following years until now, has entered a period of rapid growth and profitability for some. There are different rates of growth for different applications and many challenges - and opportunities still exist. In total, IDTechEx find that 5.9 billion tags will be sold in 2013 versus 4.8 billion in 2012.
Fig. 1 Total RFID Market Projections in US$ billions 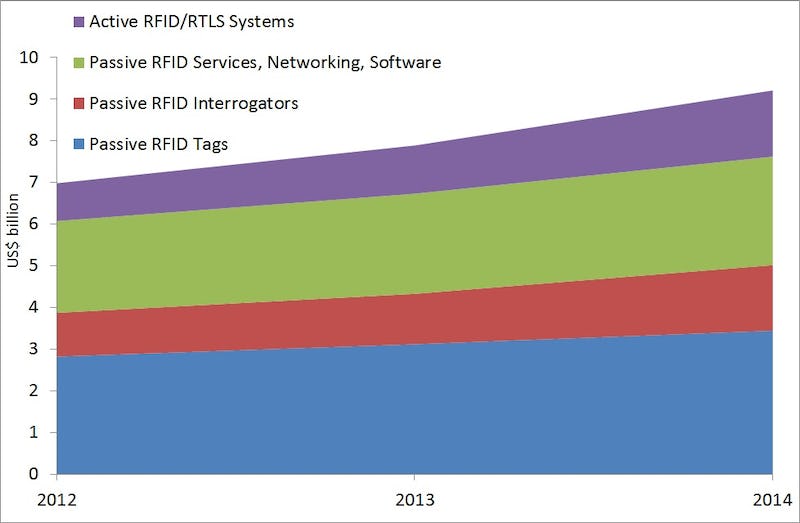 The last five years has seen consolidation throughout the value chain in passive UHF RFID with some companies emerging in true phoenix-from-ashes style. This is mainly driven by one application - retail apparel - which will globally demand 2.25 billion RFID labels in 2013. Some suppliers are now profitable and see rapid growth ahead. As in most emerging technology, there will be blips along the way - such as the current UHF RFID litigation - but we do not believe this is a show stopper - no-one makes money then. After apparel tagging, passive UHF is deployed in many different application areas for asset tracking and other applications. These are small volumes in their own right but add up to hundreds of millions of tags per year given the strong payback they give users. IDTechEx Research expects 3.1 billion passive UHF RFID tags to be sold in 2013.

However, despite passive UHF selling more tags than passive HF for the first time in 2012, IDTechEx Research finds that the money spent on passive UHF tags in 2013 will be $247 million, versus $2.15 billion on HF and $713 million on LF RFID tags. The higher value of HF and LF is due to a variety of RFID tags in high value applications including animal tagging, contactless smart cards and passports. Indeed, the size of the market of HF tags will continue to be larger than the UHF tag market over the next decade, by money but not volume. Those in HF and LF tend to be relatively large, profitable enterprises, some of whom are moving into the high growth but as yet lower value passive UHF market.

In a business approaching $8 billion this year, one could expect a one billion dollar leader but we could not find a player clocking half that figure. Of the 800 or so suppliers, IDTechEx only count eight with revenues more than $100 million, and less than twenty with sales between $20 million to $100 million. Most, but not all, in the top 8 provide complete solutions, which is still where most of the big money goes, with the others being dominant in their part of the supply value chain for a particular technology type.

Market analysis by a huge number of parameters

Using new, unique information researched globally by IDTechEx technical experts, the new report RFID Forecasts, Players & Opportunities 2014-2024 analyzes the RFID market in many different ways. Full analysis by each market is given in great detail including in-depth historic data by application type from 2005 year by year to 2020 and with a 2024 outlook. Forecasts are given by tag numbers, asp and value for more than 20 applications for passive and active RFID. RFID reader forecasts are provided along with market size by application area and trends by territory. In addition to the report clients receive a spreadsheet in Excel format giving access to the key data contained in tables throughout the report. For more details see RFID Forecasts, Players & Opportunities 2014-2024.
Learn more at the next leading event on the topic: Printed Electronics Europe 2020

RFID Sensors: Filling a Real Need or Hoping for the Best?
Smart Tattoos! Wearable Technology by Cellotape
Interview with VerdanTech at the IDTechEx Show! USA 2016
20.1 Billion RFID Tags to be Sold in 2019, finds IDTechEx Research