Each year the Printed Electronics industry recognizes and awards outstanding achievement to those involved in the rapidly growing printed electronics business. The annual awards were announced at the tenth annual IDTechEx Printed Electronics event this week in Santa Clara, California - the world's largest event on the topic.
The awards recognize outstanding progress in the development and commercialization of printed electronics, an industry that produces a huge amount of technical innovation which will be used in many products, and is now being widely adopted. The entries were judged by both end user and academic judges, which comprised of
A summary of the awards are as follows:
Best Technical Development Materials Award - Applied Graphene Materials
Best Technical Development Manufacturing Award - Rolith
Academic R&D Award - Harvard University
Best Product Development Award - Imprint Energy
Best Commercialization Award - Cambrios

Applied Graphene Materials (AGM) won this award for its high specification graphene production process that can seem to scale to large-volume, utilizing a bottom-up synthesis method. AGM, has recently completed the commissioning of its first commercial scale facility, which is capable of producing one tonne of high-purity graphene nanoplatelets per year. AGM manufactures graphene through a proprietary, continuous and scalable 'bottom-up' process which involves assembling carbon precursors into graphene.
AGM's continuous-flow method produces substrate-free, graphene nanoplatelets that are free of graphitic impurities or transition metals and can be readily incorporated in composites and dispersions. Building on the one tonne per year capacity of its first facility, AGM plans to scale up the capacity of its plant to eight tonnes per annum over the next 18 months. 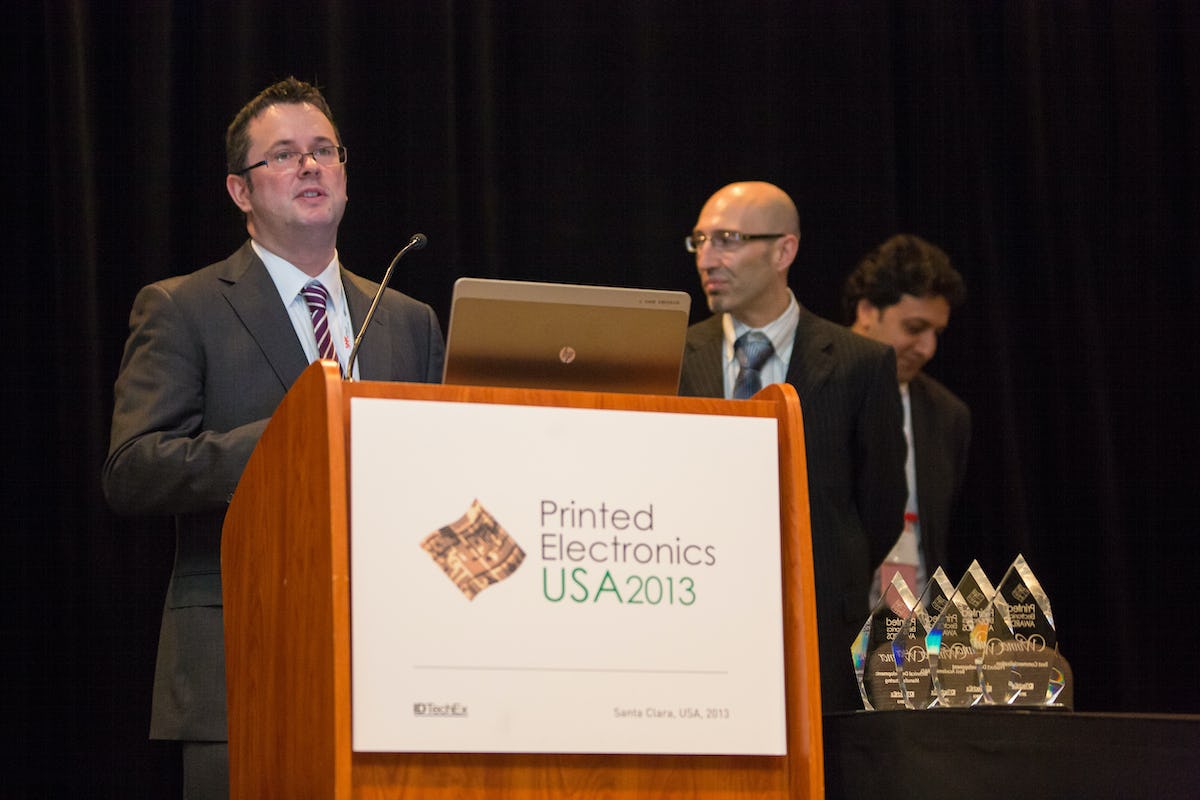 Rolith was chosen for the award based on its production of transparent metal mesh electrodes for large touch screen displays and OLED lighting. Rolith, Inc. has used its proprietary nanolithography technology called Rolling Mask Lithography for fabrication of transparent metal mesh electrodes on large areas of substrate materials. RML is based on nearfield continuous optical lithography, which is implemented using cylindrical phase masks. The structure is highly transparent (>94% transmission) with a very low haze (<2%), and low resistivity (<14 Ohm/☐). 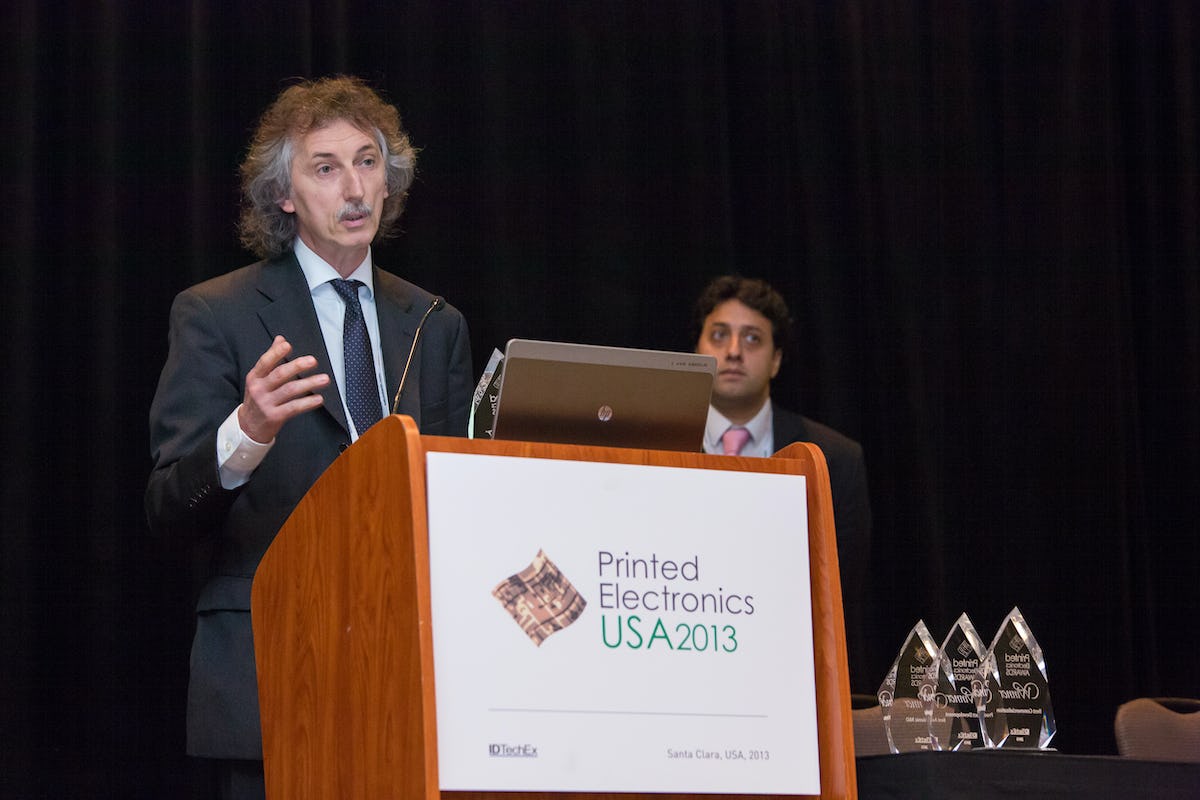 Harvard University won this award for its work on 3D Printing of Li Ion Microbatteries. The work is fascinating -the University has printed rechargeable 3D Li-ion microbatteries composed of high-aspect ratio anode and cathode micro-arrays that are interdigitated on a sub-­‐millimeter scale, and exhibit amongst the highest area energy and power densities reported to date. These microbatteries occupy volumes less than 1mm3 - equivalent in size to a single grain of sand - and are 1000 times smaller than the smallest commercially available rechargeable batteries. The university is working on developing these batteries for a broad range of autonomous applications, including biomedical devices, micro-UAVs, and distributed sensor arrays (e.g., smart dust).
3D microbattery architecture made by 3D printing 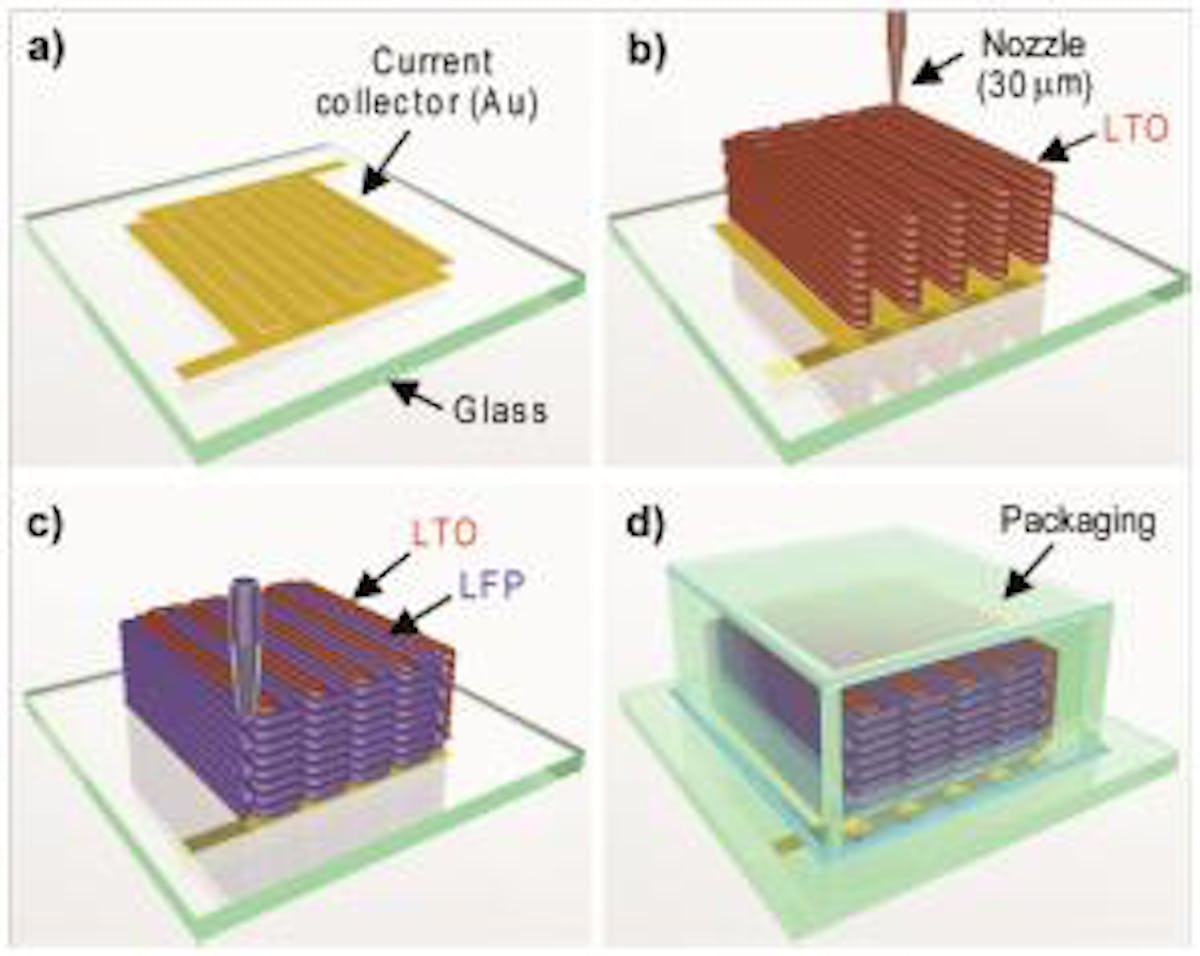 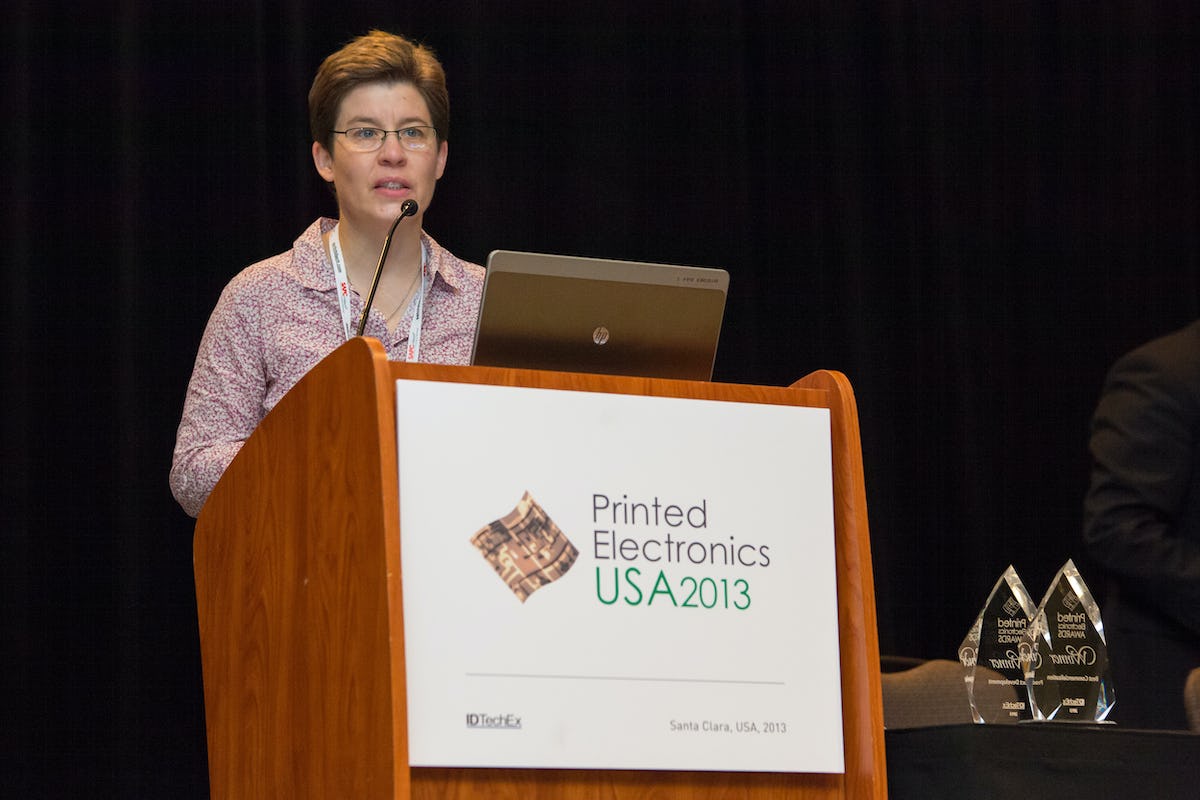 Imprint energy won this award for its Wirelessly-linked wearable displays and sensors driven by print manufactured, rechargeable batteries. The company has made a thin, flexible wearable wireless smart watch with E-ink displays and sensors, powered with printed rechargeable batteries, that can exchange information over a BlueTooth wireless link with a smartphone device (IPhone 4s - 5s). This was based on Imprint's printed battery process and materials set to produce 50mWh ultrathin, flexible batteries.
Figure (Left) Ultrathin Imprint Energy printed rechargeable battery cells (in white) integrated into a curved, flexible wrist device. (Right) Bluetooth connection and data exchange between the Imprint Energy Wrist Device and and IPhone 5 using a diagnostic app. 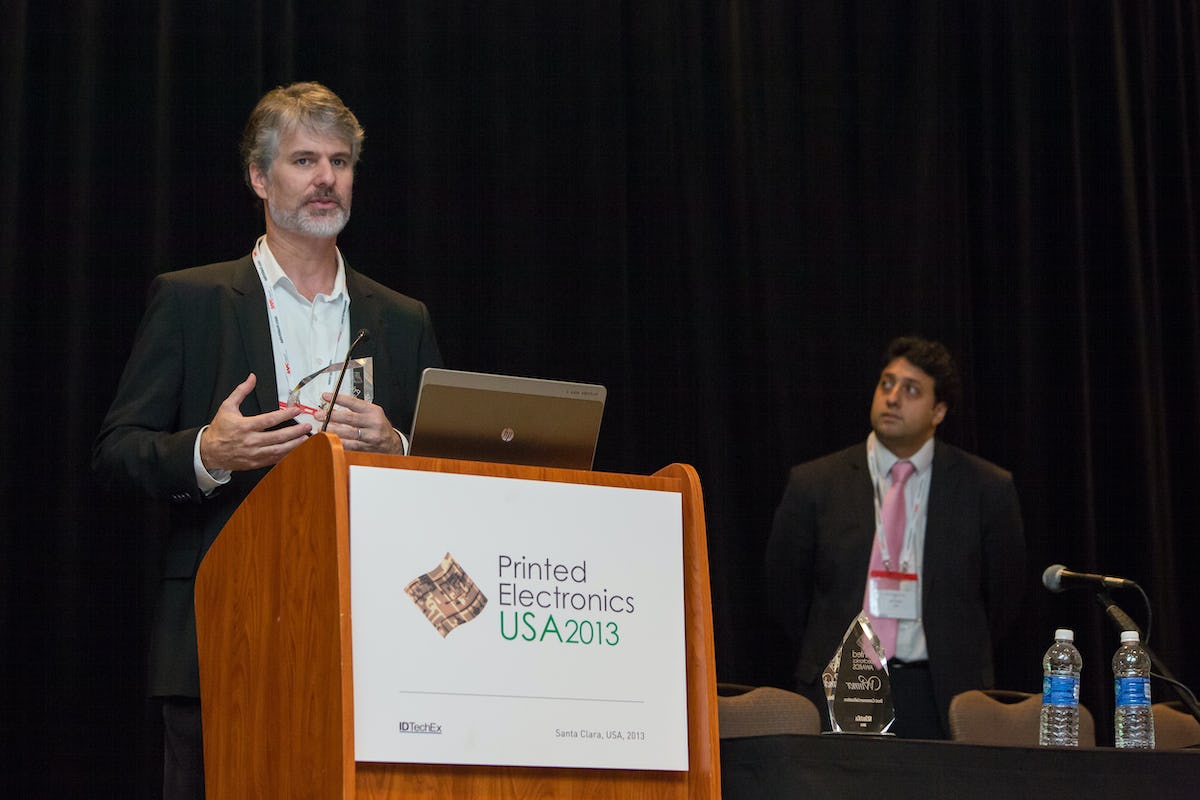 Cambrios provides ClearOhm material, which is made from highly conductive silver nanowires offering higher optical and electrical performance than previous generation transparent conductive materials such as indium tin oxide (ITO). The company won this award for its commercial success in deploying the technology into a range of products. Most recently it has been adopted by the world's largest touch sensor manufacturer, TPK. ClearOhm material commercially is being used in products by leading brands such as Lenovo, LG, NEC and others that are sold worldwide. 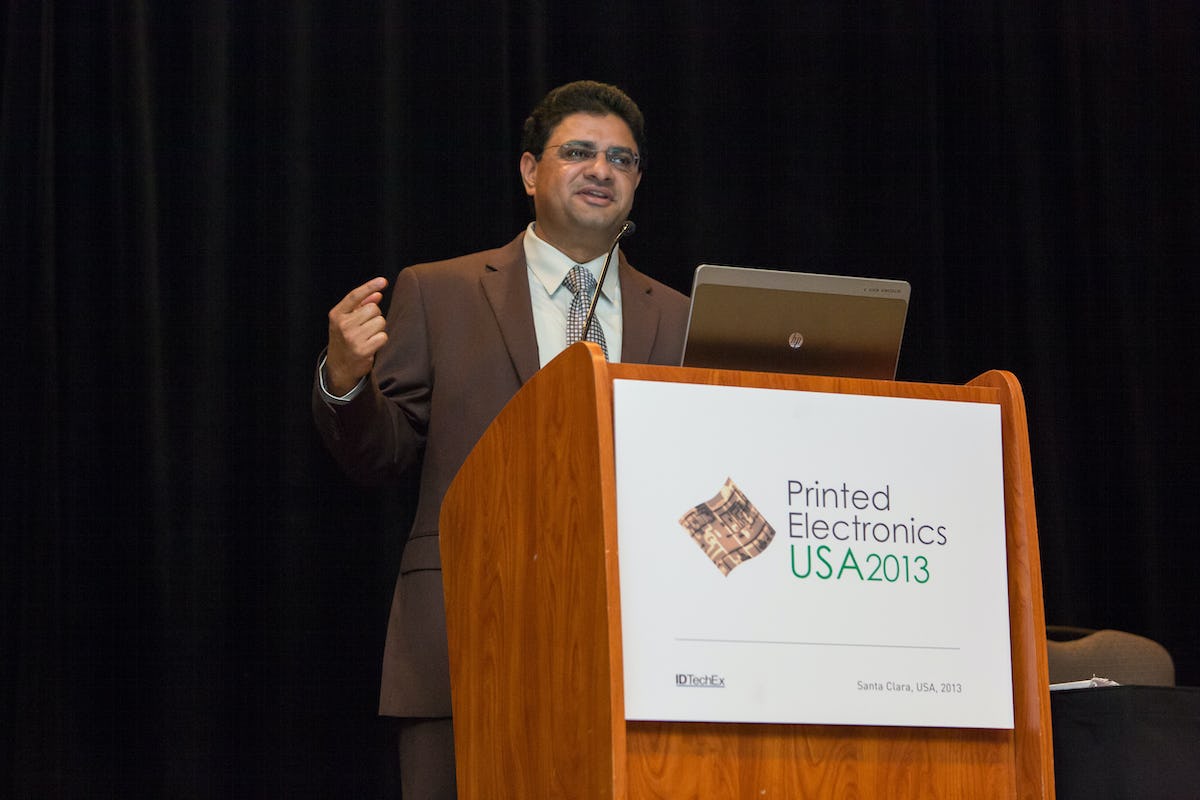 Cambrios
The next IDTechEx Printed Electronics awards will be held at the European event, in Berlin, Germany on April 1-2 2014. For more details see www.PrintedElectronicsEurope.com