India is famous for its many Nobel Prize winners, notably in Physics and the centres of excellence there are likely to come up with remarkable advances in the basics of printed electronics. Universities across the whole region are already doing excellent basic research in a variety of printed and potentially printed electronic and electric devices but major initiatives to industrialise these technologies are, as yet, largely absent. The Government is aware of this and it is now beginning to encourage product programs.
RFID, which involves printing, is just beginning to takeoff in India. Below are some of the programs. 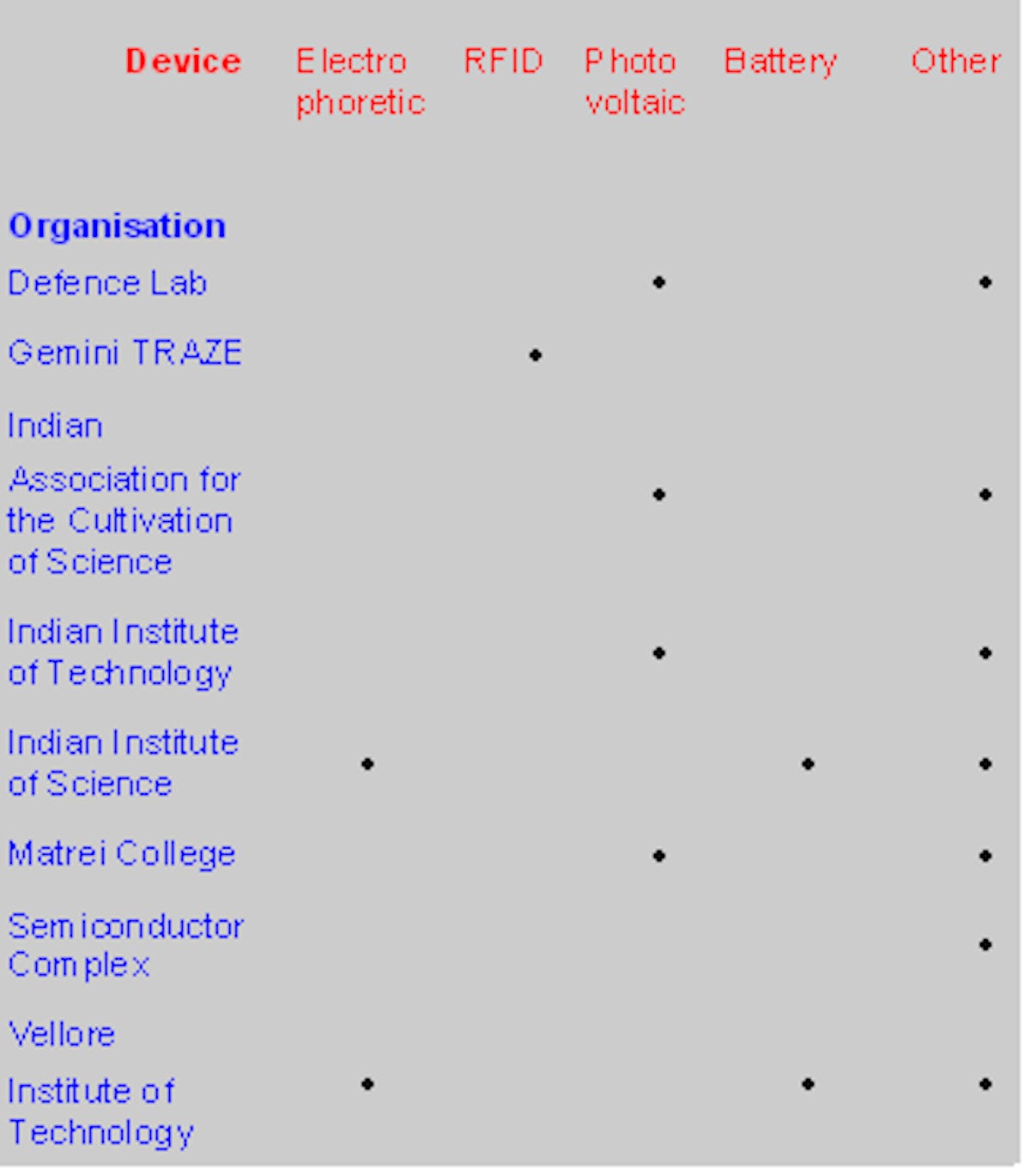 Source: IDTechEx
The Defence Laboratory Jodhpur has been studying photovoltaics including polymers such as bulk heterojunction–based poly 3–phenyl azomethane thiophene PPAT and azo dye. Another study involved a solid state approach to fabrication of DSSC solar cells using dye sensitised TiO2 film over ITO.
The Indian Institute of Technology IIT in Delhi India works on photovoltaics, for example looking at CdTe nanoparticles with polyanilene giving an ink leading to enhanced photon absorption in silicon solar cells. Maitreyi College, New Delhi, has looked at Eosin Y sensitised ZnO solar cells.
In Chennai, Gemini TRAZE has recently set up India's first plant for the volume manufacture of RFID tags. The Indian Association for the Cultivation of Science (IACS), Kolkata India, has developed sol–gel derived undoped and Mn doped In3/SiO2 nanocomposite films for photovoltaics and characterised them.
The Indian Institute of Science is working with the Government's Semiconductor Complex (pictured) and the Vellore Institute of Technology to make a laptop that is as cheap as possible. They claim to be able to slash the price to $47, beating the $100 objective of Massachusetts Institute of Technology which is working on the $100 laptop for the developing world. The favoured display for the MIT product is electrophoretic. Both organizations will print interconnects and employ printed transistors when they are available.
The objectives include making the device more rugged than today's laptops not just more affordable. The benefits of flexibility and rollability of printed electronics are therefore likely to be employed and eventually the benefit of co–depositing many large components on top of each other as well, thus improving cost, reliability, life, tolerance of dirt and water and durability in a way that silicon technology can never achieve.
Source top image: SCL India