HF (13.56 MHz) is the most popular RFID frequency by a big margin, particularly in money spent. It is still dramatically ahead in numbers of tags sold, despite UHF tags being offered well below cost due to oversupply of them. HF is also well ahead in number of projects, as shown by statistics for 2861 RFID projects in 98 countries in the IDTechEx RFID Knowledgebase. Indeed, using your mobile phone to buy things, access value added services from smart posters etc is based on a global standard called Near Field Communication at HF ie 13.56 MHz. It is hugely popular in Japan and now beginning to sweep the World.
The application of polymer electronics to ambient intelligence, using a 13.56-MHz RFID transponder tag that is made solely with flexible organic devices has been addressed by a European project entitled PolyApply. 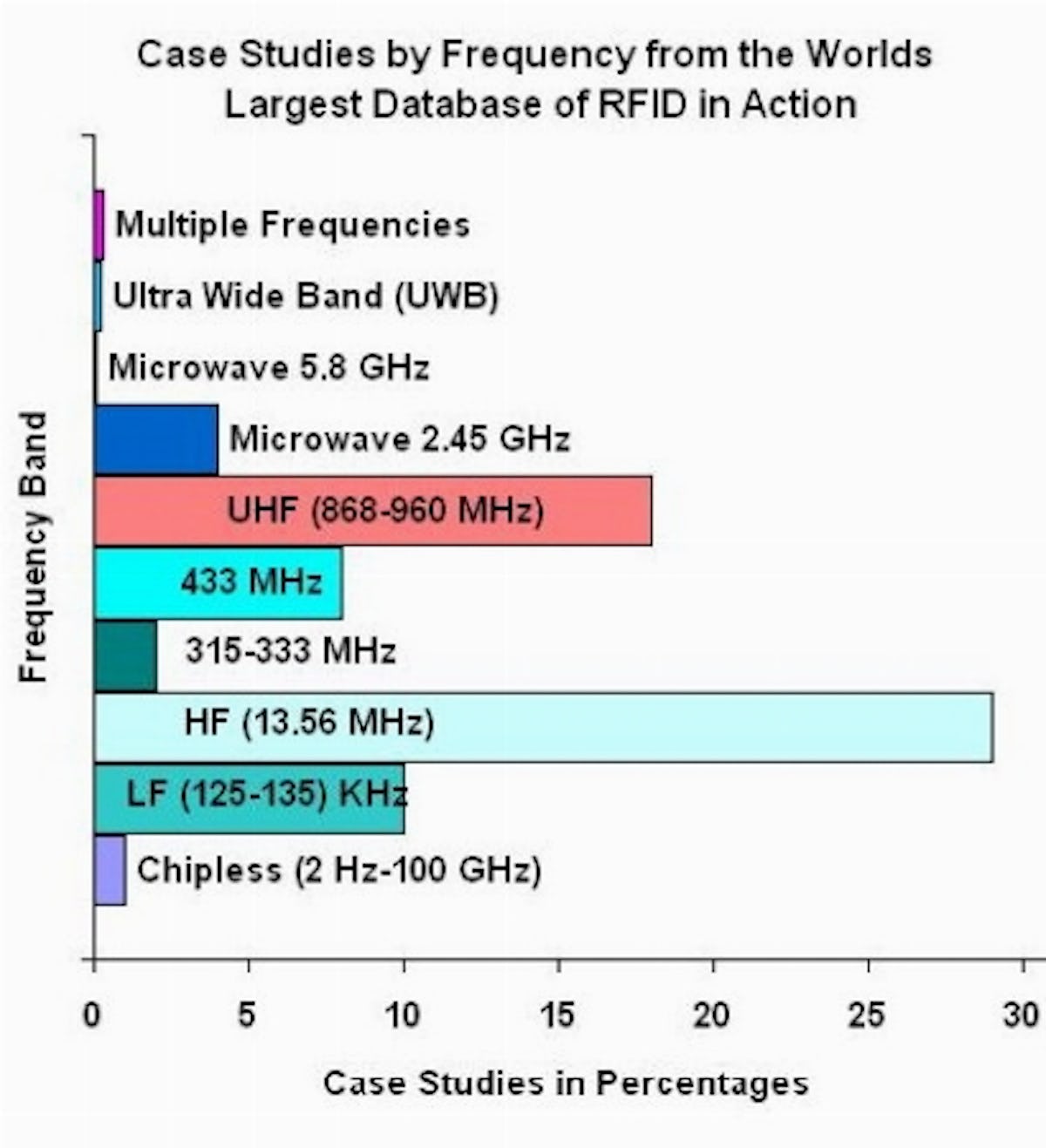 Source: IDTechEx
Though RFID communication devices and protocols have been developed in the past and exist today, in their present form they cannot be used on a large scale to enable communications with everyday objects. The fundamental reason has been the silicon technology employed to realize it. Even in its most optimistic projection, cost remains at least an order of magnitude higher than the cost of a technology such as a barcode. Therefore, a new generation of devices is required to enable ambient intelligence at the right cost point to be truly applicable everywhere.
This challenge was addressed by PolyApply, an integrated project funded by the European Union. PolyApply is a consortium of 18 partners from industry and research that focuses on the objective of laying the foundation of a scalable and widely applicable communication technology. The key to achieving a cost point that would be lower than might be achievable with the evolution of the existing technologies such as CMOS is to move resolutely toward a revolutionary new manufacturing technology - and also to go from batch processing to in-line manufacturing technology.
The semiconductor system envisaged to this end is based on organic semiconductors, which are small molecules and polymers. The partners chose a RFID tag to demonstrate the different process technologies as well as materials and devices developed in the course of the project.
The first demonstrator in 2005 targeted a frequency of 125 kHz, while the now presented second generation is working at the standardized high frequency (HF) of 13.56 MHz. It consists of single devices - an antenna, a resonance capacitor, a rectifier, a ring oscillator and a modulator - made from various partners of the consortium. All single devices are built on the basis of organic semiconductors, conductors and dielectrics on flexible substrates and produced with inline-compatible processes.
The major challenge of this demonstrator was to have a rectified power supply with sufficient voltage for the circuit (the ring oscillator) by rectifying the 13.56 MHz radio frequency signal from the antenna. It was demonstrated, that the rectified power was high enough to start the ring oscillator signal. Thus an oscillating frequency of more than 100 Hz was shown.
This is a significant result towards the realization of low cost high volume organic RFID tags, because all components are made with inline compatible processes. It also demonstrates that various material classes and processes developed by the consortium, from evaporated molecules to printed polymers, are suitable for use in the new organic electronics technology.
www.polyapply.org