Countries That Will Win With Printed Transistors and Memory

Printed transistors and memory will be the largest part of the new electronics just as silicon chips are the largest part of the old electronics. The reason is that printed logic and memory are needed in almost everything electronic. It therefore matters greatly which countries will win in printed transistors, the engine of the whole printed electronics revolution.
Lessons from IDTechEx research
In the research currently being completed by IDTechEx for the new report "Printed and Thin Film Transistors and Memory 2007-2027", 102 organisations involved have been profiled in detail and 48 others have been compared in a chart, making 150 organisations in all. IDTechEx believes that there are about 200 organisations doing significant work in the subject but the first 100 are a good indication of the geographical location of the countries most likely to win. It reveals that the USA and Japan are leaders in number of interested organisations, Germany and Korea are the second division and the UK and Taiwan are in the third division.
Bright ideas are no compensation for lack of critical mass
It would be nice to believe that the sheer brilliance of work in some countries offsets the paucity of organisations involved but there is no evidence of this. Semiconducting organic materials were discovered in the USA and Japan. Light emitting small molecule organics were discovered in the USA but light emitting polymers were first discovered in the UK. To take one example of a relevant company, Plastic Logic has always seen itself as a global organisation with investing institutions and staff from across the world. However, it is active in the UK and now Germany, in both cases in the hot locations for printed electronics in those countries. Companies such as these hugely benefit from a critical mass of effort nearby.
Germany leads Europe
In Europe, Germany is particularly impressive in this respect, since most of the roll to roll printing machinery manufacturers and the relevant industrial development institutes in Europe are located there and the same goes for materials developers and suppliers. Indeed, BASF in Germany is the world's largest chemical company. The critical mass around Dresden/ Chemnitz and widely around Frankfurt are particularly notable.
Number of Organisations Involved in Printed and Thin Film Transistors and their Materials by Country - Taken From 100 Profiled Organisations 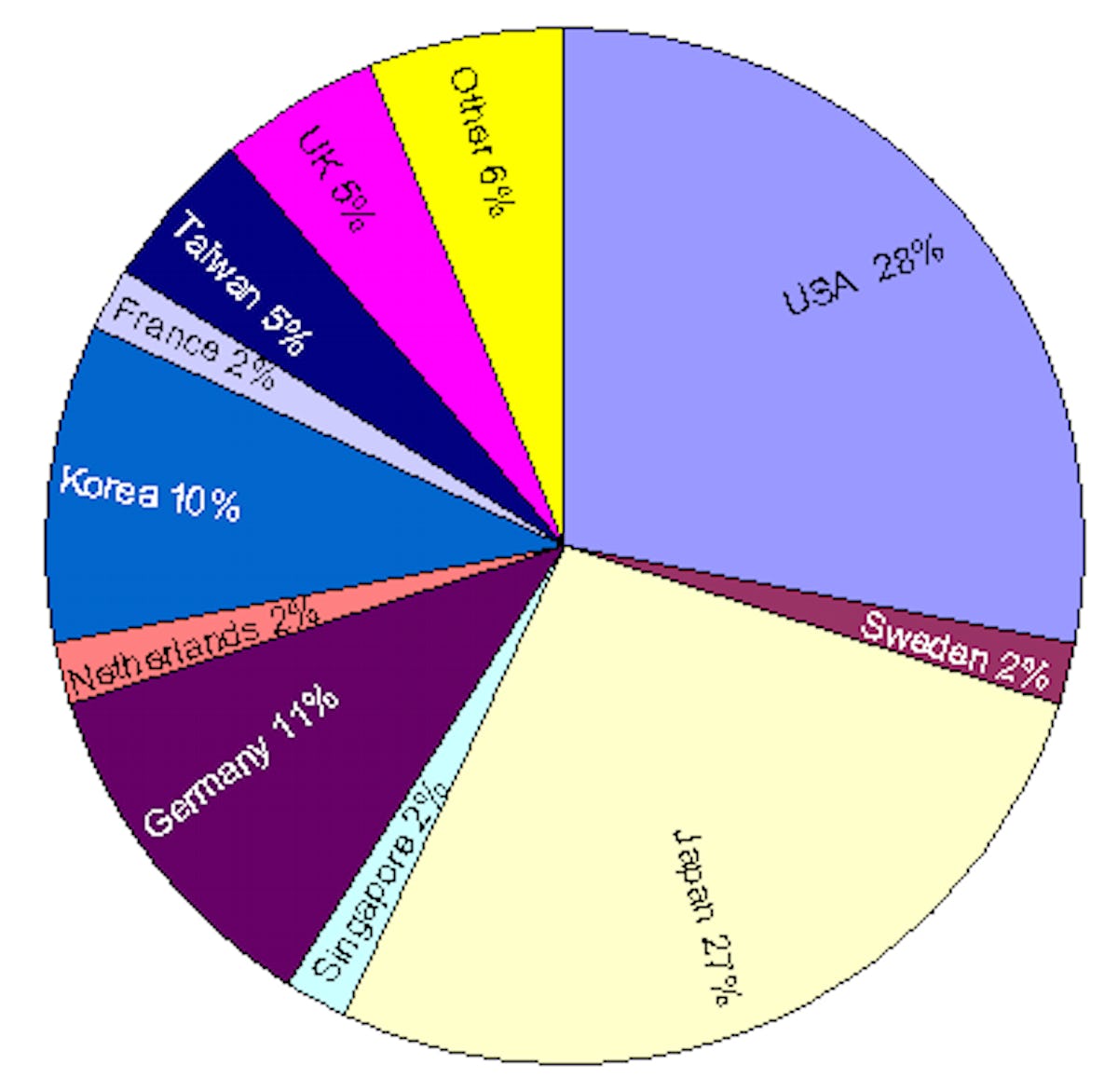 Source: IDTechEx
Silicon chips are about 20% of the value of today's electronics business. Although the dominant component, they are a relatively small percentage because the finished equipment often consists of such grand items as laptops, television and radar. Displays within these are particularly expensive but all this is set to change. In twenty years, the printed logic and memory that is the engine of the new electronics may be as much as 35% of the new electronic market value. This larger percentage is because the completed new electronics will usually take more prosaic forms such as electronic labels, sticky tape, wallpaper and disposable packaging - a far cry from radar or even today's laptop.
If interested in this report, contact Dr Peter Harrop on p.harrop@idtechex.com