Completing the Connection Between the Analogue and Digital Worlds

As digital media in the form of portable devices, touch-screens and pervasive wireless networks offer new possibilities for interaction, the traditional book defined by UNESCO, "As a non periodical printed publication of at least 49 pages excluding covers," starts to look rather featureless when compared to electronic versions. But the traditional book has many advantages too - not least the comfort of tradition itself. The BlueBook aims to find a compromise between these two objects, between the digital and the physical.
The BlueBook created by Manolis Kelaidis at the Royal College of Art in London is a traditional book over-printed with conductive ink. This conductive ink creates hyperlinks on the page which, when touched by the reader, activates a processor concealed in the cover of the book. This processor then connects via Bluetooth to a nearby computer, triggering different actions.
Imagine reading a book like the Da Vinci Code and being able to Google the name of one of the pieces of art or societies such as the Knights Templar by touching a word in the book. This was the vision Manolis Kelaidis described at a recent "Tools of Change for Publishing Conference." He described his project to integrate digital content into physical books via circuits printed in conductive ink on the same page as the text. From the description of his session we learn the following:
"Books have always had problems representing animation. Static pictures simply cannot compete with moving images for illustrating moving things. When describing complex technical activities, like bookbinding, video descriptions are invaluable yet so is detailed verbal description which is often more accessible in print than when spoken.
One of the most important aspects of the internet is its capacity for collaboration. From blogs to the wikipedia, from chat forums to project management websites, the internet has enabled productive discussion between complete strangers. With a button at the end of an essay, you can immediately discover and take part in the ongoing internet discussion relating to it.
Emerging markets bring their own problems. When shown languages in a foreign writing system, Mandarin for example, users have difficulty looking up words. To non-natives, characters often look too similar to identify in a traditional printed dictionary and typing them into an on-line dictionary is impossible without the right keyboard. Once buttons are integrated into such books, translations are only a touch away.
Potentially books could be tagged thematically as users read them using the buttons inside. These tags can then be stored on a computer - either for users or libraries. In this way the catalogue is made more sophisticated every time a book is used. Since the books already have a wireless technology built in they will be able to broadcast their location on request, perhaps by even changing colour to help you find them on the shelf.
Much has been made of the death of visuals in selling music. Digital distribution is making physical packaging redundant. If the packing were better able to relate to the electronic media the situation could be quite different. If people could use a book to control music on their computers not only would it present an exciting marketing opportunity but also a far more convenient way of accessing the story behind the music. Imagine a book where every song mentioned could be played by touching the title or track."
Kelaidis predicts that the technology to achieve all this will evolve as follows: 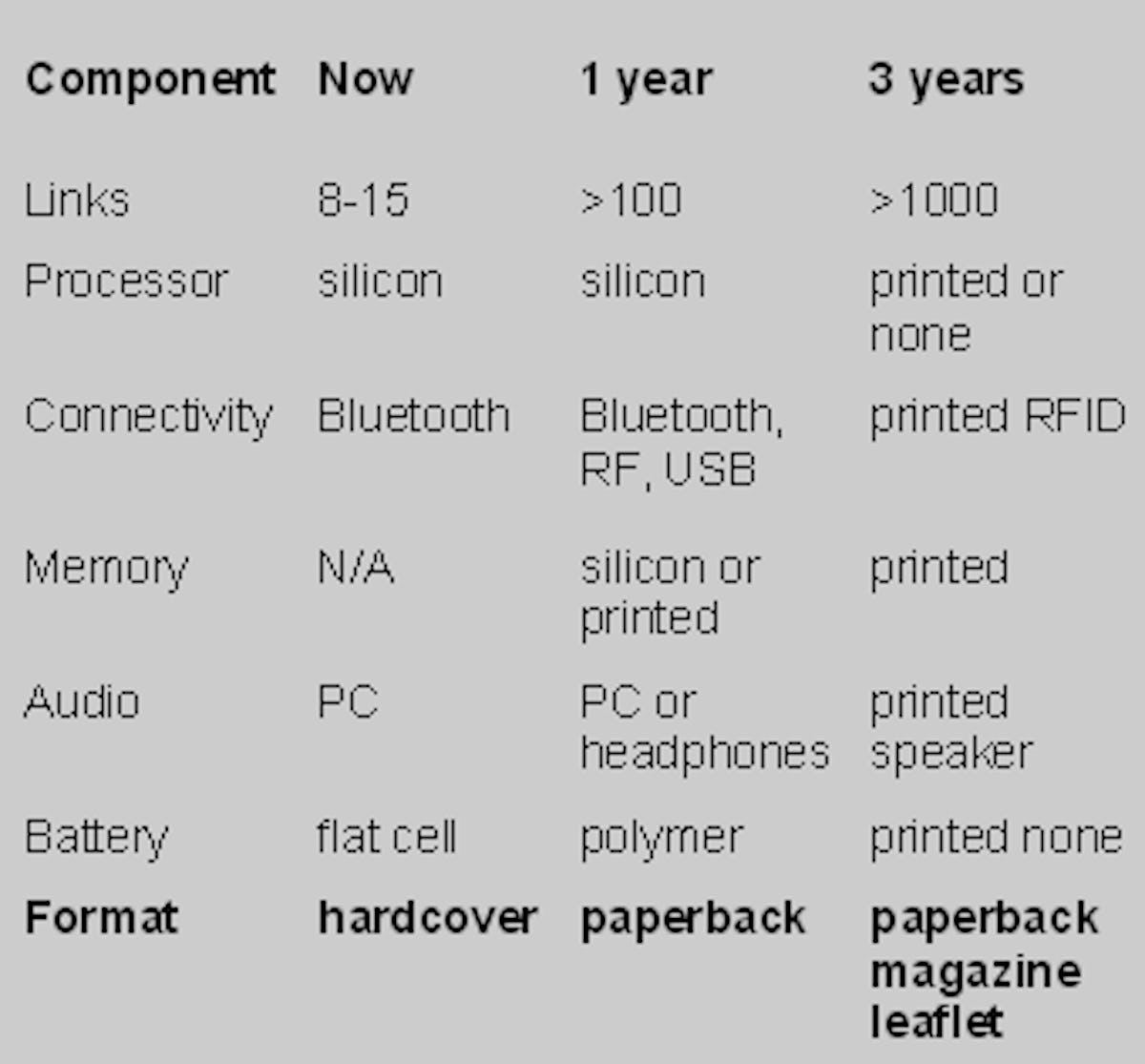 Source: Presentation made by Manolis Kelaidis
He concluded, "Books have inherent qualities that make them an irreplaceable medium, even today. They have survived unchanged for centuries and are one of the most familiar and best selling products we know. For a particular type of user experience they simply have not been bettered. Digital media (portable devices, touch-screens, etc.), however, have been offering seductive new possibilities to readers, especially in terms of interactivity."
Manolis Kelaidis is a designer and engineer who likes his books to be made of paper. His recent work looks into the future of the traditional book as an interface to access digital content. He is a lecturer at the Royal College of Art and a Fellow at Imperial College's Tanaka Business School in London.
Source of top image: www.radar.oreilly.com
For more on printed electronics attend Printed Electronics Asia 2007 or Printed Electronics USA 2007.