Printed electronics is growing to become a $300 billion market and, in 2007 alone, many factories are coming on stream to print, for the first time, transistors, displays and solar cells. The advent of foldable, rollable, wide area and very high volume electronics hangs on this. In addition, printed stretchable electronics, biodegradable electronics, ubiquitous sensor networks and radically improved human interfaces that will lead to a host of new products and applications. We shall have more forms of conformal electronics like the giant plastic film electroluminescent displays today, that are almost fully printed already.
We shall add wearable electronics thanks to printing and there is the prospect of replacing most of the world's lighting with something more versatile, lower in cost and lower in power consumption while being more environmental as well. There is also the prospect of replacing 5-10 trillion barcodes yearly with printed RFID that is more versatile, reliable and has a lower cost of ownership. Disposable, flexible products will be particularly important. In the Third World, ubiquitous lighting, power and the laptop costing $50 or less can transform literacy and create prosperity thanks to these new technologies.
The effort to achieve this is remarkably evenly split between East and West. The first division, doing more than any other nations are the USA in the West and Japan in the East. The same symmetry appears in the second and third divisions as well - Germany + Korea and the UK + Taiwan respectively.
In the IDTechEx report, Printed Electronics in East Asia, new in July 2007, 140 organisations in the six leading East Asian nations for printed electronics have been profiled and analysed. The number of organisations by country and the percentage share that this represents is shown below.
Distribution of 140 Companies Active in Printed Electronics East Asia by Country 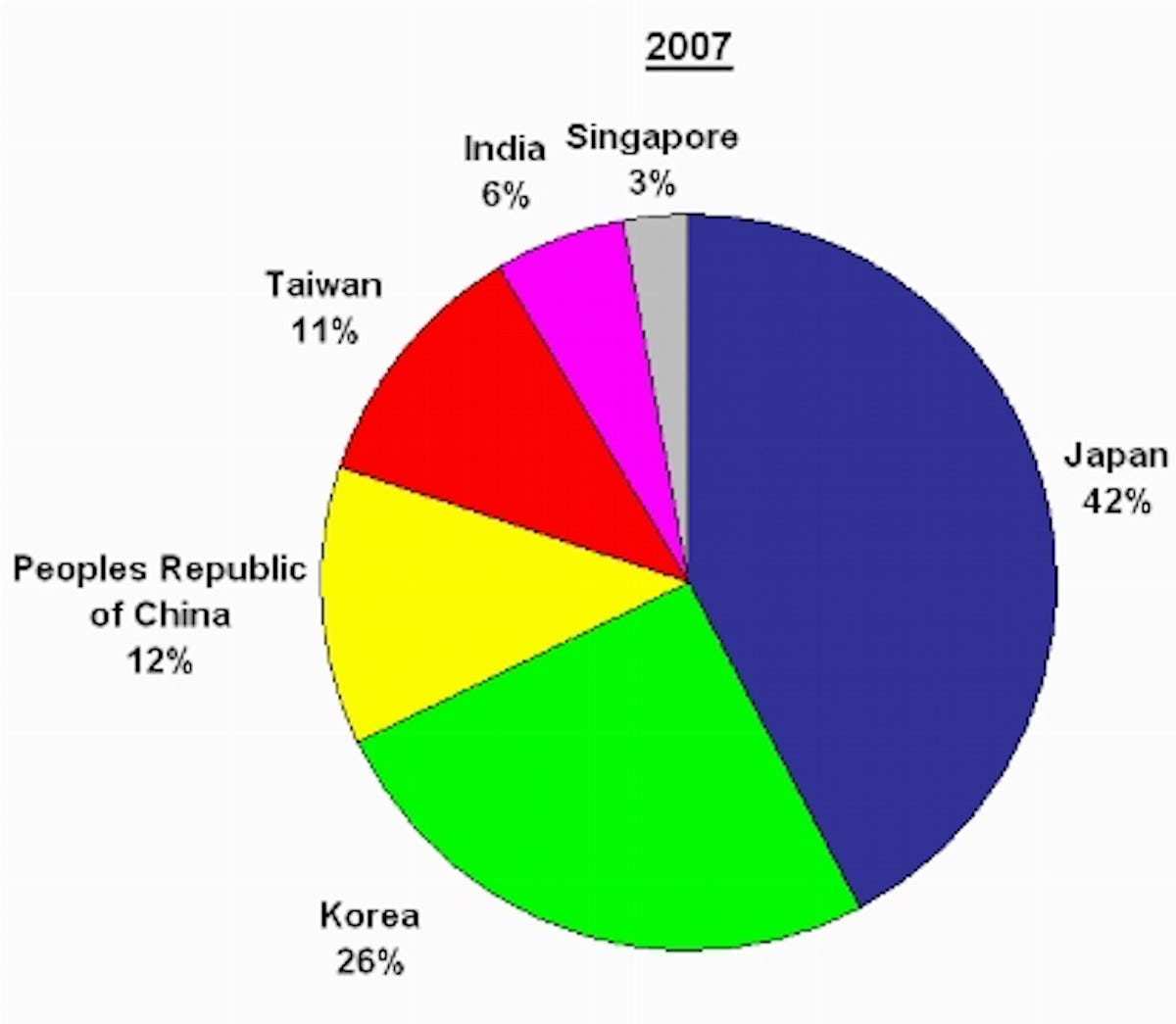 Source: IDTechEx report Printed Electronics in East Asia
The importance of Japan is even more evident when we look at 341 types of project in the report, the categories being OLEDs, electroluminescent displays, electrophoretic displays, RFID, transistors, photovoltaic organic, photovoltaic inorganic, battery and other. Of these activities, 51% are in Japan. This is why IDTechEx has chosen Japan for the largest conference on the subject in the region - Printed Electronics Asia, Tokyo, September 10-11. Simultaneous Japanese-English translation is provided.
Western visitors to this event, which includes an exhibition, get a unique package that gives them remarkably in depth exposure to the region's activity. Hosted by IDTechEx, it includes company visits, personal introductions to key people in the region and a copy of the new research Printed Electronics in East Asia mentioned above. There are also heavy discounts on the new reports Printed and Thin Film Transistors and Memory 2007-2027 and "RFID in China" published in July 2007.
Conference coverage is comprehensive, with sessions on:
Dr Peter Harrop, Chairman of IDTechEx says, "We are very aware of the huge opportunities for Western organisations in the region to sell, to buy, to learn and to form alliances. We are proud to be staging such a comprehensive event. It has carefully selected best-in-class speakers from Hitachi, Seiko Epson, Konica Minolta, Ulvac, Kobe Advanced ICT Research Centre, Nissan Chemical, Marubeni, ITRI Taiwan, AIST Korea, the Universities of Tokyo, Chiba and Osaka and other leading printed and thin film electronics organisations. This is a uniquely effective way for a Western organisation to gain thorough insight in less than one week."
Register by July 27th to receive a 25% discount. For more details please see www.idtechex.com/peASIA or contact Ning Xiao at n.xiao@idtechex.com.