The Market for Organic and Printed Electronics 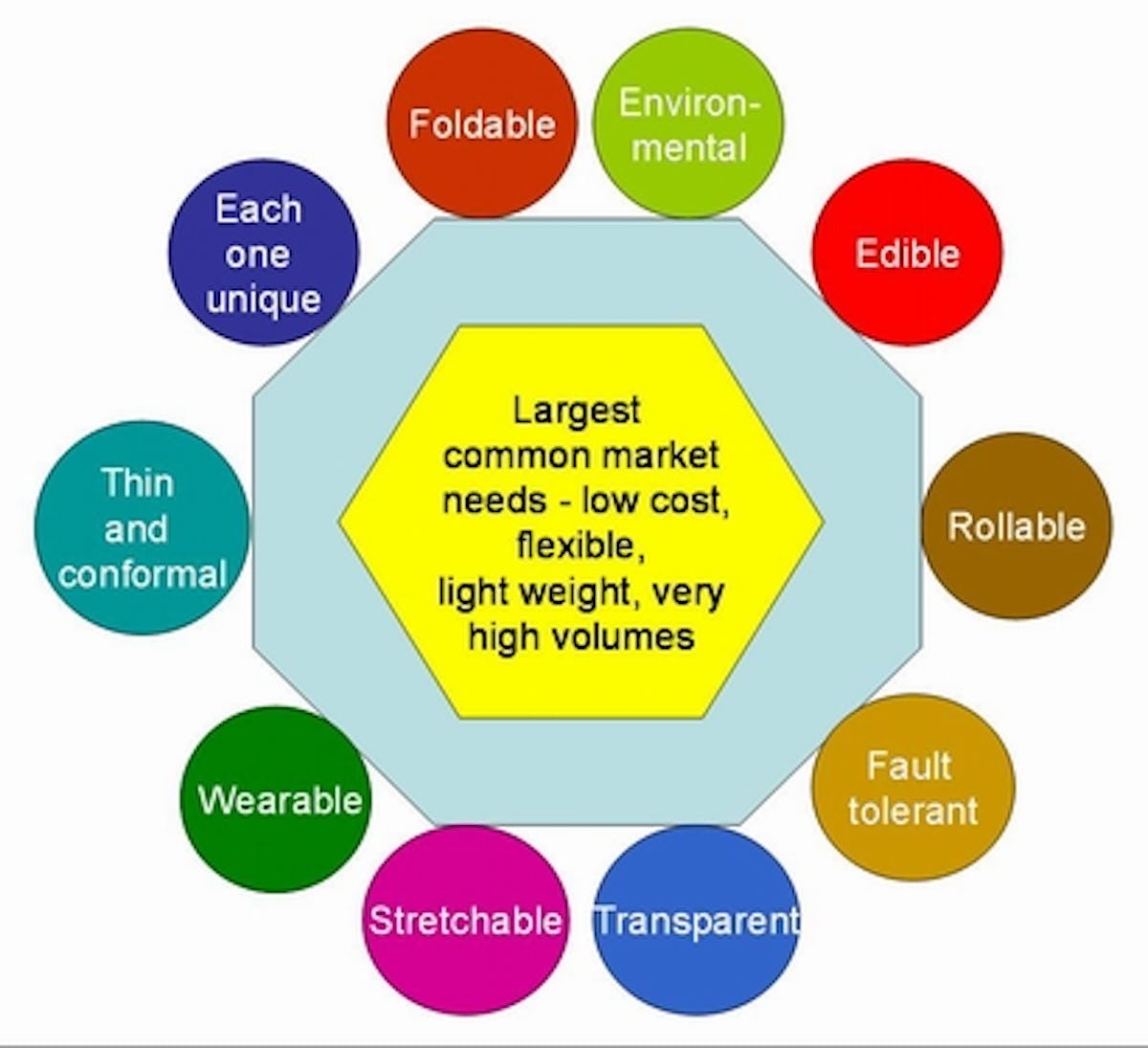 Source: IDTechEx
Let us look at the significance of a few of these new paradigms.
Origami electronics
If we make very thin and lightweight products that are foldable we have the ACREO concept of packaging that refolds to become something useful. We also have large area self assembly electronics. Konarka has a laptop charger that is a solar panel that folds to the size of a pack of cards and Orion Solar has solar panels for your house that fold up so you can easily get them home after purchase.
Edible electronics
Somark Innovations has patented edible printed RFID for tracing cattle and meat and Eastman Kodak has recently patented edible printed RFID for drug monitoring. There is no silicon chip involved in either case. Tokyo University and others have announced various forms of stretchable electronics that will have many uses from healthcare to fashion.
Organic-inorganic
However, the potential uses of organic and printed electronics are now so many and so varied that no one talks any more about organic materials taking over in all cases. Indeed, composites of organic and inorganic materials are becoming very common. They include ruthenium organic dyes on titanium dioxide nanoparticles for Dye Sensitised Solar Cells. In the UK, G24i now has a factory producing these on flexible substrates using ink jet. Elegantly, the factory is powered by solar cells and wind turbines.
Then there is recent success with transistors using silicon nanoparticles in organic inks. It used to be believed that both inorganic and organic semiconductors had to be as crystalline as possible to give high charge carrier mobility and therefore high frequency of operation in transistors. However, the InGaZnO transistors being printed by Tokyo Institute of Technology and Toppan Printing Japan are amorphous. An organic carrier is used in the ink. The resulting transistor arrays form backplanes for flexible electrophoretic displays.
Breakdown of the old certainties
Enthusiasts for organic electronics have begun to think that almost anything will eventually be possible with their technology. A very important milestone in this has been Merck announcing a 3.5cm2/vs stable, printable polymer. This is the final nail in the coffin of thin film amorphous silicon in transistors. aSi is not suitable for low cost flexible substrates and now it no longer has an advantage over printed organic semiconductors in mobility and therefore frequency of operation.
On the other hand, we have identified no significant progress towards economic, printable, organic dielectrics of high permittivity. These are needed for transistor gates, capacitors and so on and there may be fundamental limits to the permittivity of organic compounds. It was perceived that the traditional ceramic high permittivity dielectrics would never be printed ie we would never learn how to "print pottery". Fortunately, the laboratories of Motorola and Hewlett Packard have proved that wrong, even with the archetypal barium titanate.
The US company Evident is supplying inorganic compound quantum dots a few nanometers across in organic carriers. Universities are printing these to make improved transistors, solar cells and so on. Rare materials are not needed but the quantum effects involved are magic indeed. Bear in mind that the Nobel Prize winning physicist Richard Feynman said, "Nobody understands quantum theory."
Rapidly changing situation
A summary of the predominant chemistry being used and developed for the different device layers is given below. However, this is very much a changing situation. For example, Waseda University Japan has announced an organic flexible battery that charges in only one minute and many new organic electrolytes for thin film lithium batteries are coming along.
The predominance of different chemistries in printed and thin film electronics today. Inorganic is shown in dark green, organic in red and alternative/combined solutions in light green. White indicates where there in nothing. For example, a memory does not have an electrolyte.
Current Situation - Organic vs Inorganic 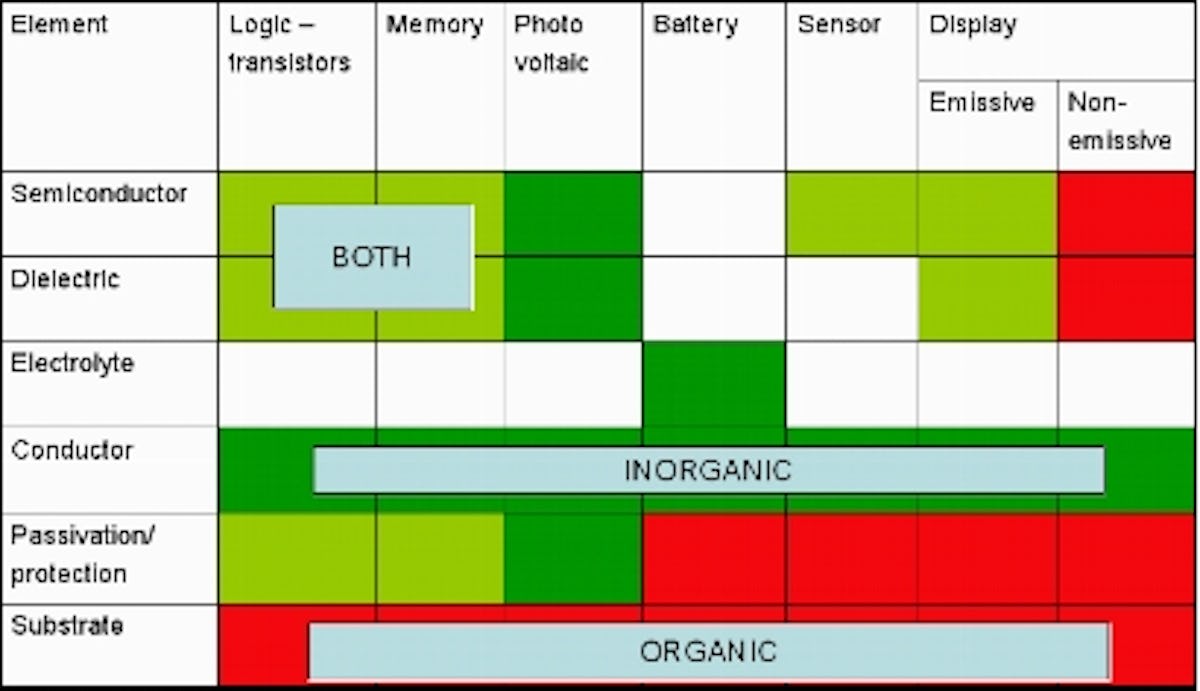 Source: IDTechEx
Electrophoretics take a lead
Before flexible OLEDs are sold in volume, flexible electrophoretic displays are taking off. This is a very exciting segment of the market because these displays have no need for power until the image is being changed and they work well in strong sunlight. Indeed rigid versions are used in Motorola mobile phones in India. Leaders in electrophoretic displays include Prime View Technology in Taiwan, Toshiba in Japan, Innos/ Polymer Vision in the UK (first flexible versions in June 2007), Tainjin Jinke Electronics in China and, of course, Sony. They are ideal for shelf edge displays, road and airport signage, e-books, e-posters and many other applications. Note that most of these applications make new things possible and few of them replace anything electronic.
Ink suppliers E-ink, SiPix and others are working on colour versions and problems of life, sticky images etc are largely overcome, often by using combined organic/ inorganic constructions. Large areas are possible.
Clearly, the world of organic and printed electronics has become much more exciting in the last year and this will continue. Over 1000 organisations are now involved.
Latest information brought to you from IDTechEx
Learn more in the one of the most comprehensive new reports on this topic, covering the big picture - with 20 years forecasts across all components; organic, inorganic and composites; printed and potentially printed. Buy the Organic & Printed Electronics Forecasts, Players & Opportunities 2007-2027 report by July 31 and save 30%! 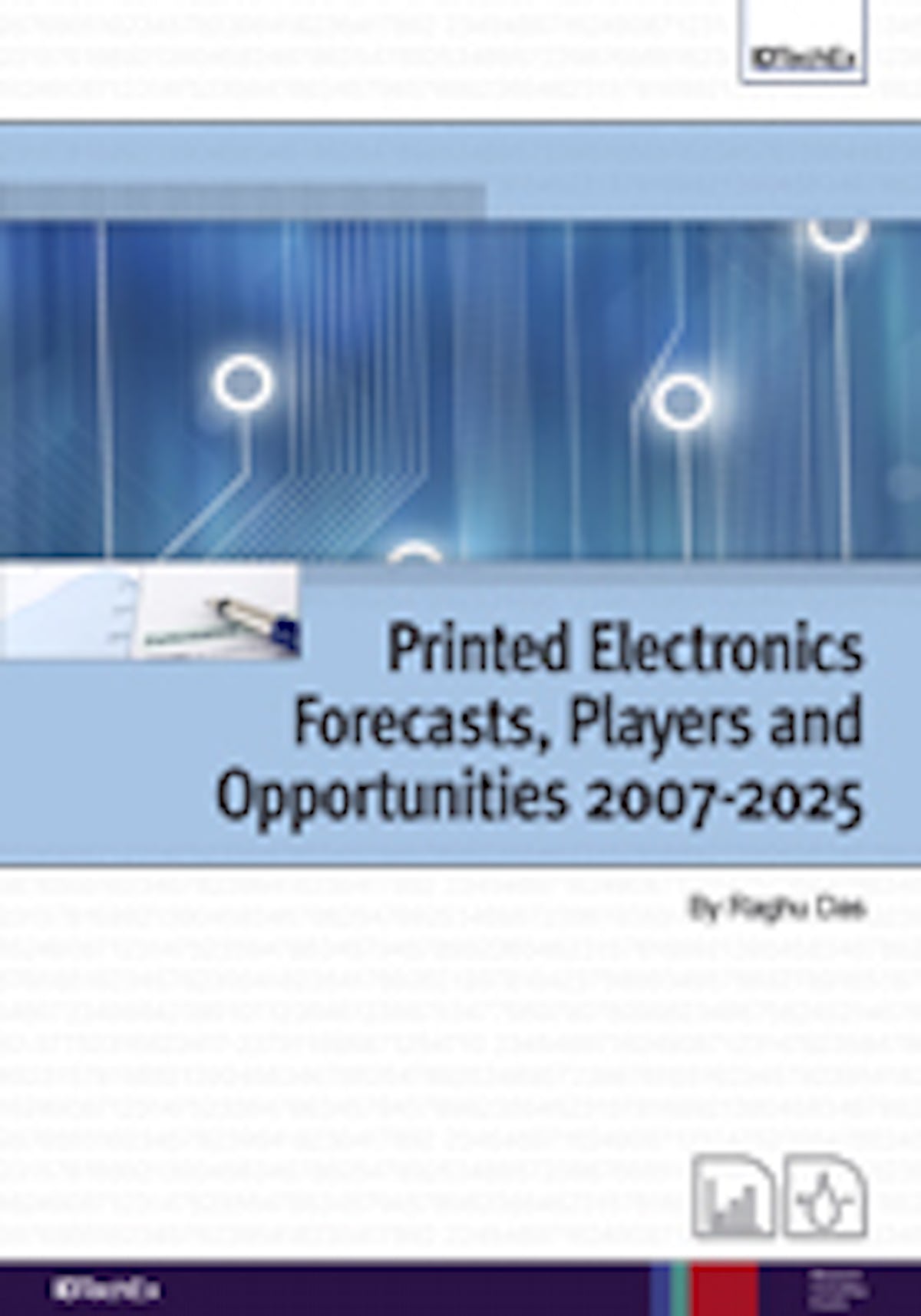