Is Europe Losing the Race?

Overall, Europe may be losing the race for the huge new business of printed electronics and the rejuvenation of society that it will bring. This is despite having far more academic institutions than East Asia working on the subject, the number being somewhat ahead of North America as well. That is a possible conclusion from the new IDTechEx report Organic and Printed Electronics in Europe which analyses and compares the activities of 248 European organisations in the sector.
Consider the patents scene. Analyst Cintelliq has issued a report "Inventors 2003-2005" - an analysis of inventors of organic semiconductor patents. See www.cintelliq.com

for further details. One of its summary charts lists the world's most prolific patentors by name and allegiance in the period 2003-2005. They are under the categories LED and Transistors, where the Japanese were the winners in both cases, Photovoltaics and Lasers, where the US led, Sensors, where many European and US inventors were equal with a mere two patents each, Memory cell, with the US leading and Other, with Japan in the lead. In "LED" category (essentially OLED), just one person, Shunpei Yamazaki in Japan, had 104 patents granted in that period. Europe was the loser.
Look at it another way, if we add up the named inventors qualifying for the Cintelliq league tables above, we find that East Asia and the USA both had nearly twice as many winners as Europe. Some say that such analysis is misleading because the East Asians, in particular, patent trivia much of the time. IDTechEx finds no evidence of this but we are able to compare the continents in other ways too. Our new report Printed and Thin Film Transistors expresses the opinion that there are about 200 organisations worldwide doing serious work that can lead to printed transistors and memory. This is potentially the biggest sector of printed electronics, just as silicon transistors and memory are the biggest sector of conventional electronics. The report looks closely at 150 of these organisations. Where are they located? The chart below gives the figures.
Location of 150 Organisations Developing Printed and Thin Film Transistor and Memory Technology 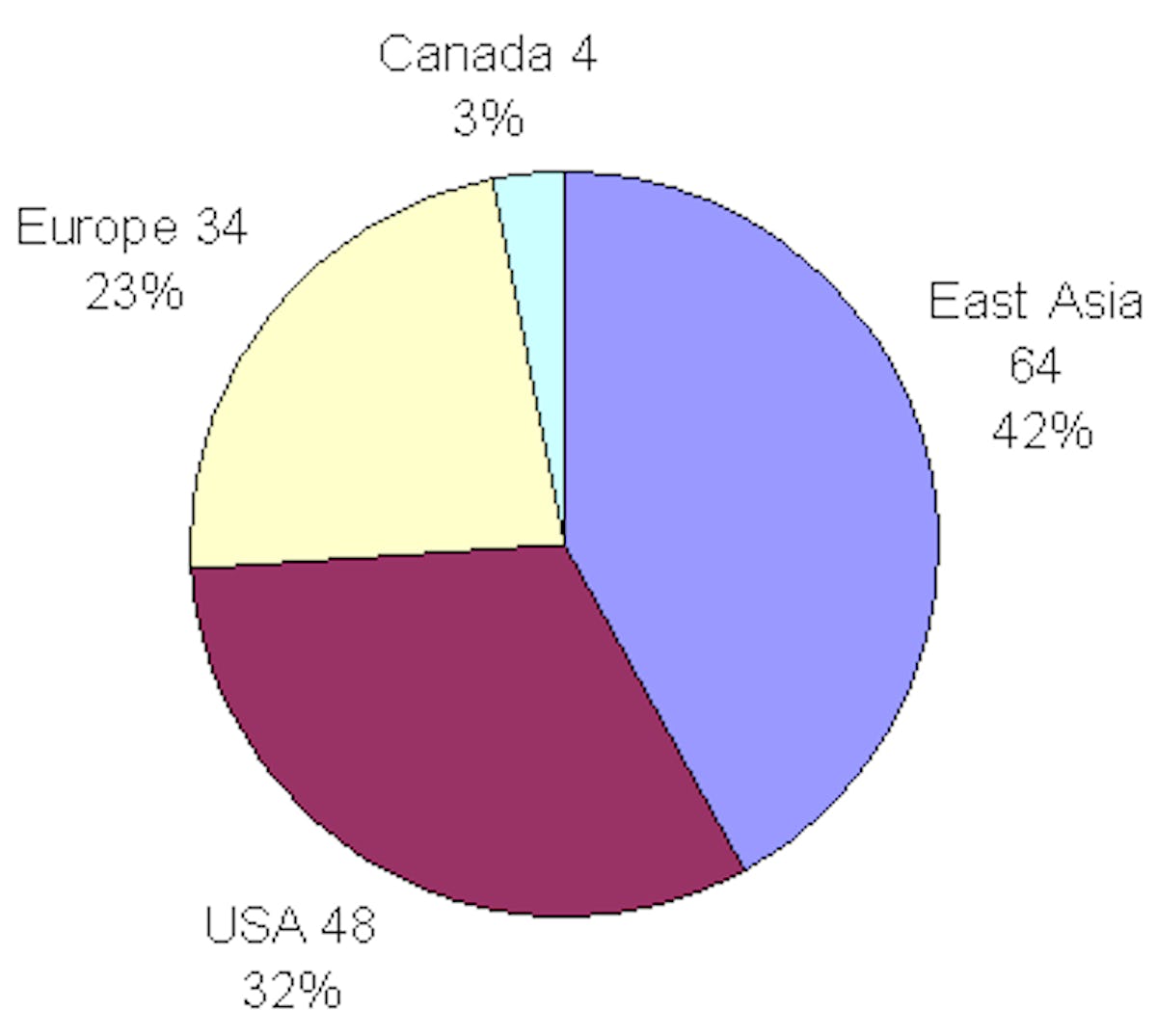 Europe is the loser again. Superb display work is going on in Europe, but, in global terms, this is also modest in scope. For every PolyIC startup intending to make printed transistor circuits in Europe there are many more printed transistor startups in the USA and even more Japanese giants headed that way.
For every European giant backing printed and potentially printed electronics as a whole, such as BASF, the world's largest chemical company, supplying the materials, there is a string of giants such as Sony, Matsushita, Canon, Sumitomo and Toshiba with major programs in Japan, usually right through to complete devices. Many will be their own customer. That is an extremely significant point, given that giant printing and packaging companies in East Asia such as Dai Nippon Printing and Toppan Printing are also heavily into printed electronics, putting their European equivalents to shame.
Consider the giant corporations involved in what will become the largest sectors of printed and potentially printed electronics - OLEDs, transistors and photovoltaics. The table gives examples. 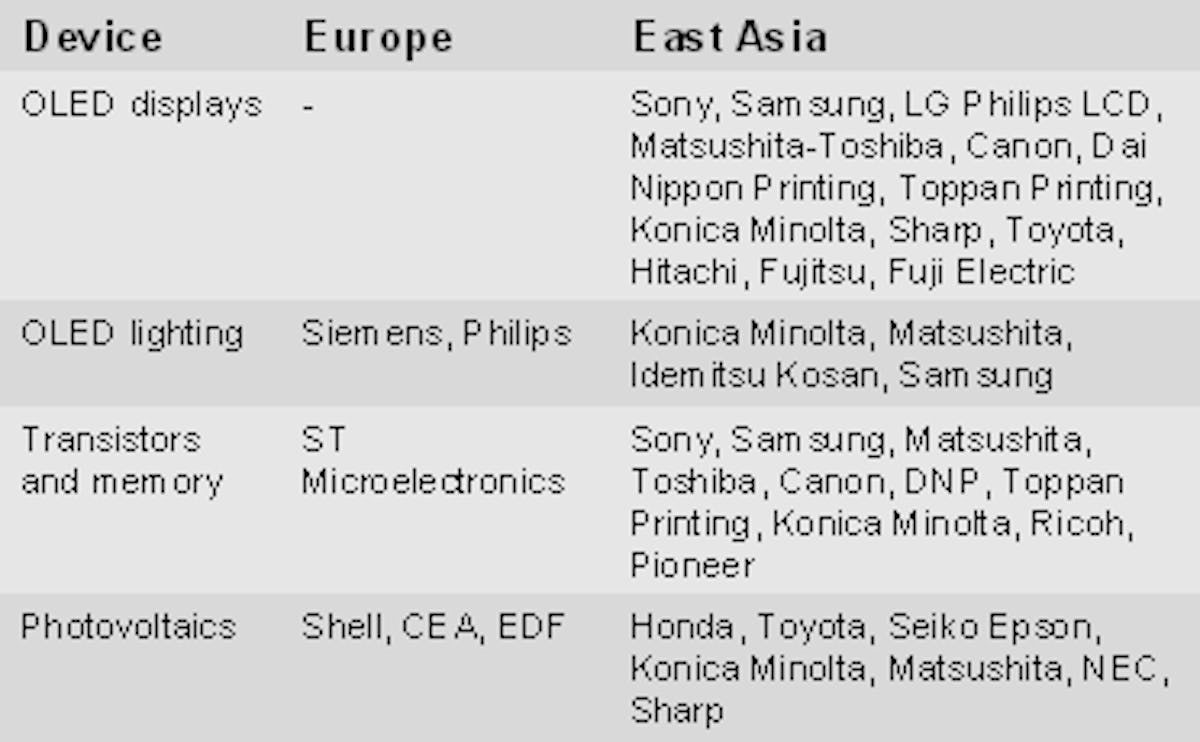 Examples of Giant Corporations Intending to Make the Printed and Potentially Printed Devices with the Largest Market Potential
Source: IDTechEx
Role models of success
Leonhard Kurz in Germany is an exception, though it is not yet a giant. This 2000 person company, with global reach in laminates, foils and coatings, is putting both transistors and photovoltaics into production in two separate divisions. It bought the printed transistor business from Siemens and it licensed the printed photovoltaic process from Konarka. Merck Chemical has bought several companies developing and selling materials for printed electronics and it strongly supports appropriate academic work, showing admirable consistency of purpose as well. BASF has recently boosted its effort by licensing formulations for printable semiconductors and dielectrics from two companies. The "post silicon" division of ST Microelectronics has recently filed numerous patent applications for carbon nanotubes for molecular and biomolecular memories, single-electron transistors based on functionalized metal nanoclusters and other long term prospects. However, consistency of purpose and major investment by European giants in this subject is virtually confined to materials, OLED lighting, sensors and photovoltaics.
Most European giants have reduced or abandoned their activity
More than six other European giants have been divesting or shutting some or all of their post silicon printed and thin film electronics businesses at a time when none of the East Asian giants have been doing so. That leaves Europe as a happy hunting ground for foreign acquirors of companies, research centres and patents in printed and potentially printed electronics. Consequently, several European leaders in DSSC solar cells, organic solar cells and much else besides are now in foreign hands, mainly American. Now the Japanese are joining the party, with Sumitomo Chemical buying CDT, one of the three global leaders in polymer OLED IP. The Europeans could acquire US and even East Asian activities in the field but they are rarely interested. It seems a shame, because European research and development in the subject has been rapidly growing, with a remarkable 132 research organisations (out of 248 studies in total) in 19 European countries analysed in the new report Organic and Printed Electronics in Europe. Will their creativity and major expenditure result in nothing more than wealth creation in other parts of the world, where non European companies make and sell the resulting products? Will much of it result in nothing more than reports gathering dust on shelves? Let us hope not.
Source of top image: www.esa.int