Updates in printed electronics from Japan

IDTechEx recently visited Japan for the FineTech expo in Tokyo. This article summarises the latest findings and updates from Japanese companies in the field of printed electronics.

It was surprising to see that many companies at the expo were developing transparent conductive films (TCF) based on metal mesh. Given the fact that the market for TCF is already crowded and that metal mesh films are already commercially available, these suppliers risk becoming a 'me too' with little differentiation other than cost. This is despite the fact that the addressable market is large. One reason behind this trend is the lack of imagination from the materials and equipment suppliers: many Japanese companies are very good at developing new materials and manufacturing processes, but do not necessarily know the application. Producing metal meshes have therefore become the default test to demonstrate a new ink or printing process.

Canatu, based in Finland, were at the event to launch their Carbon Nanobud (CNB) Flex film, a TCF which according to the company can withstand 180° bending tests at a 1 mm radius, without compromising the conductivity. The picture below shows the TCF from Canatu: 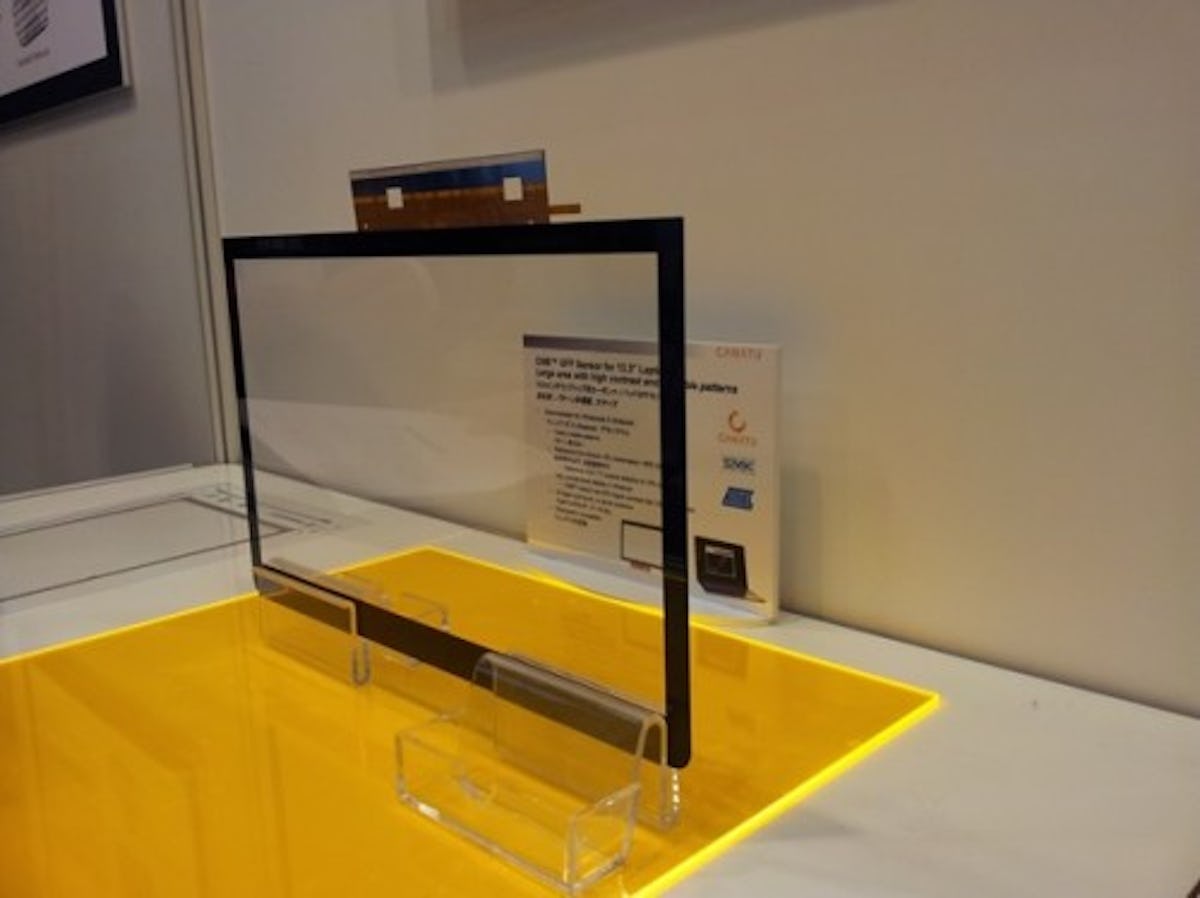 The carbon nanobud can also be stretched when the film is moulded into a 3D shape, as shown in the picture below: 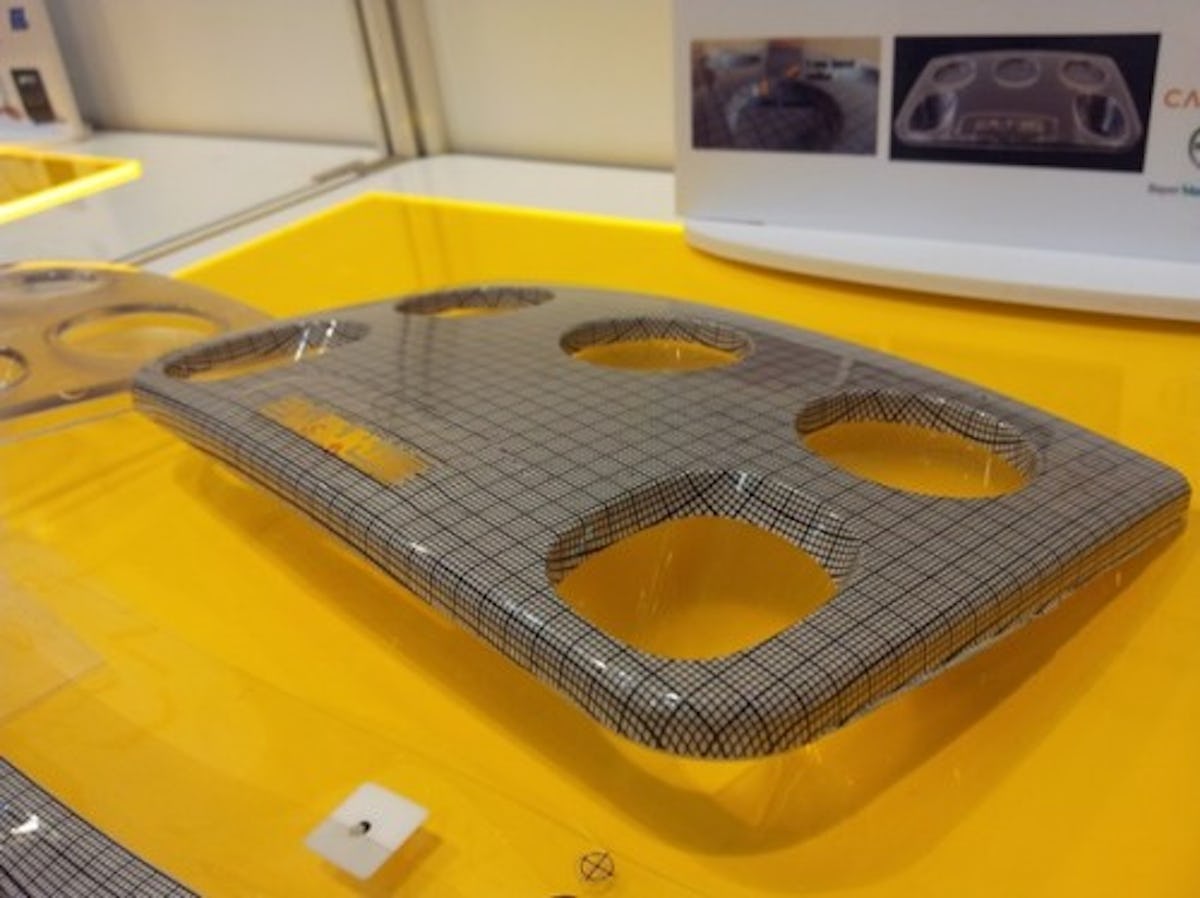 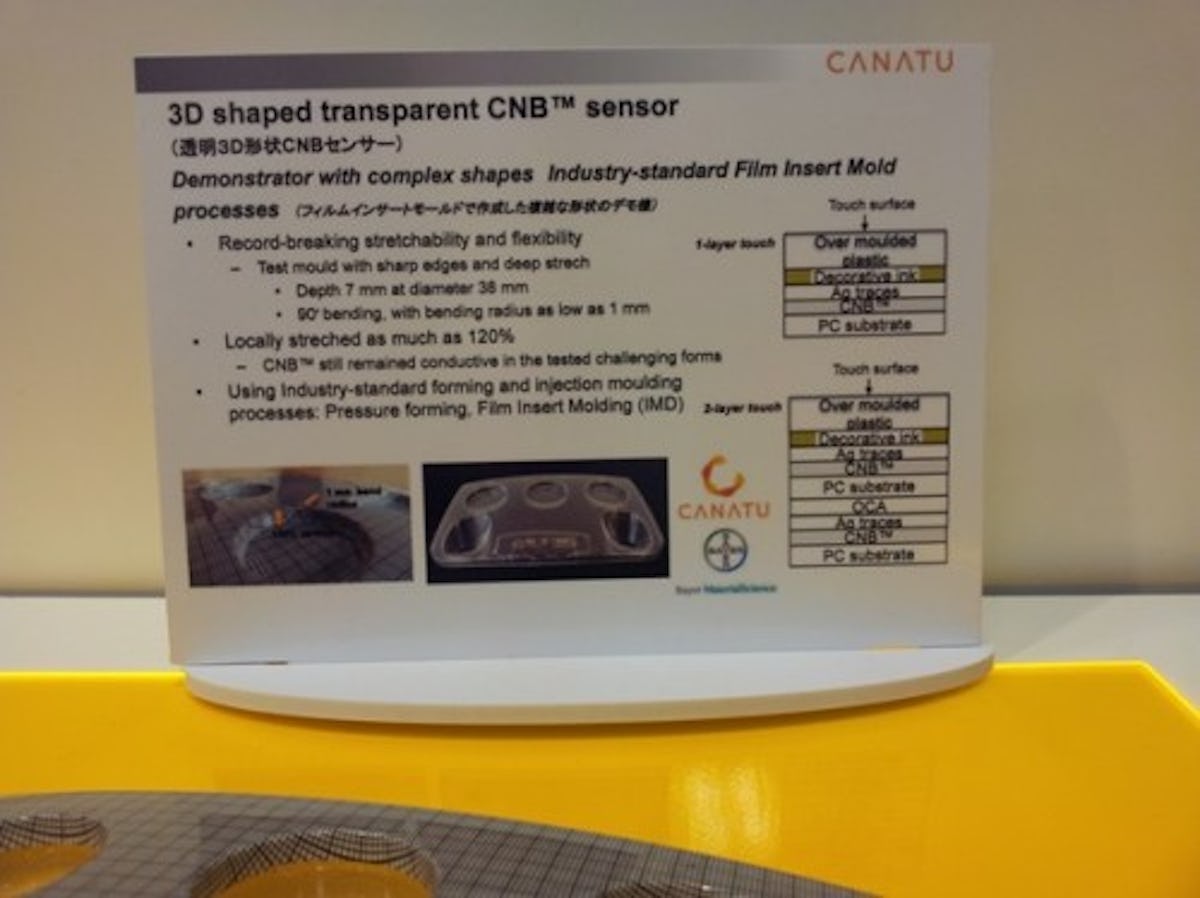 PEDOT is another TCF material which can be stretched to some extent. Manufacturers Heraeus and Agfa both had demonstrators of 3D moulded TCF at their respective booths: 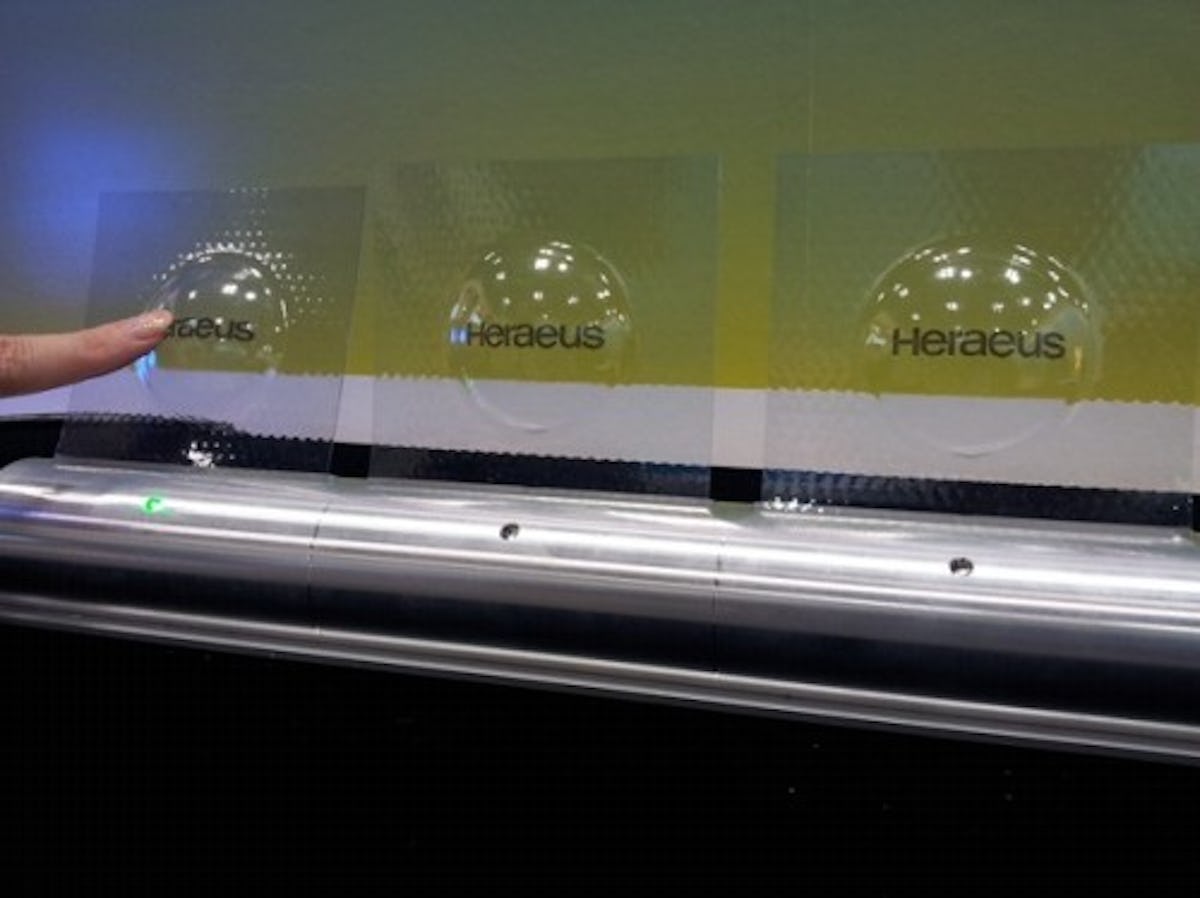 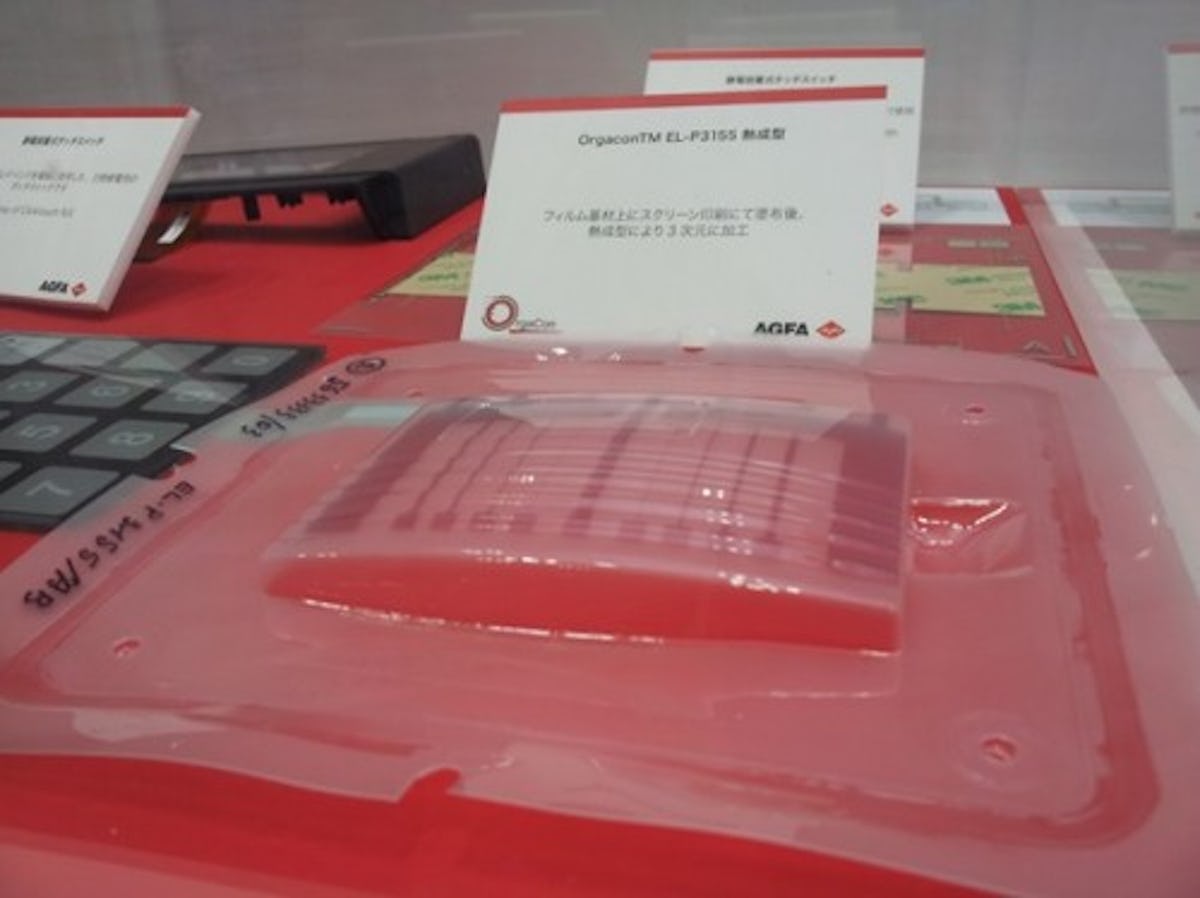 It is also worth mentioning a recent spinout company from AIST called High Shear Processing (HSP). The technology allows blending various materials together to make nanocomposites. They have used the process to disperse carbon nanotubes into SEBS (an elastomer) to create a conductive material which is stretchable up to 50% with almost no loss in conductivity. The material can be then dissolved in a solvent to make a printable ink. 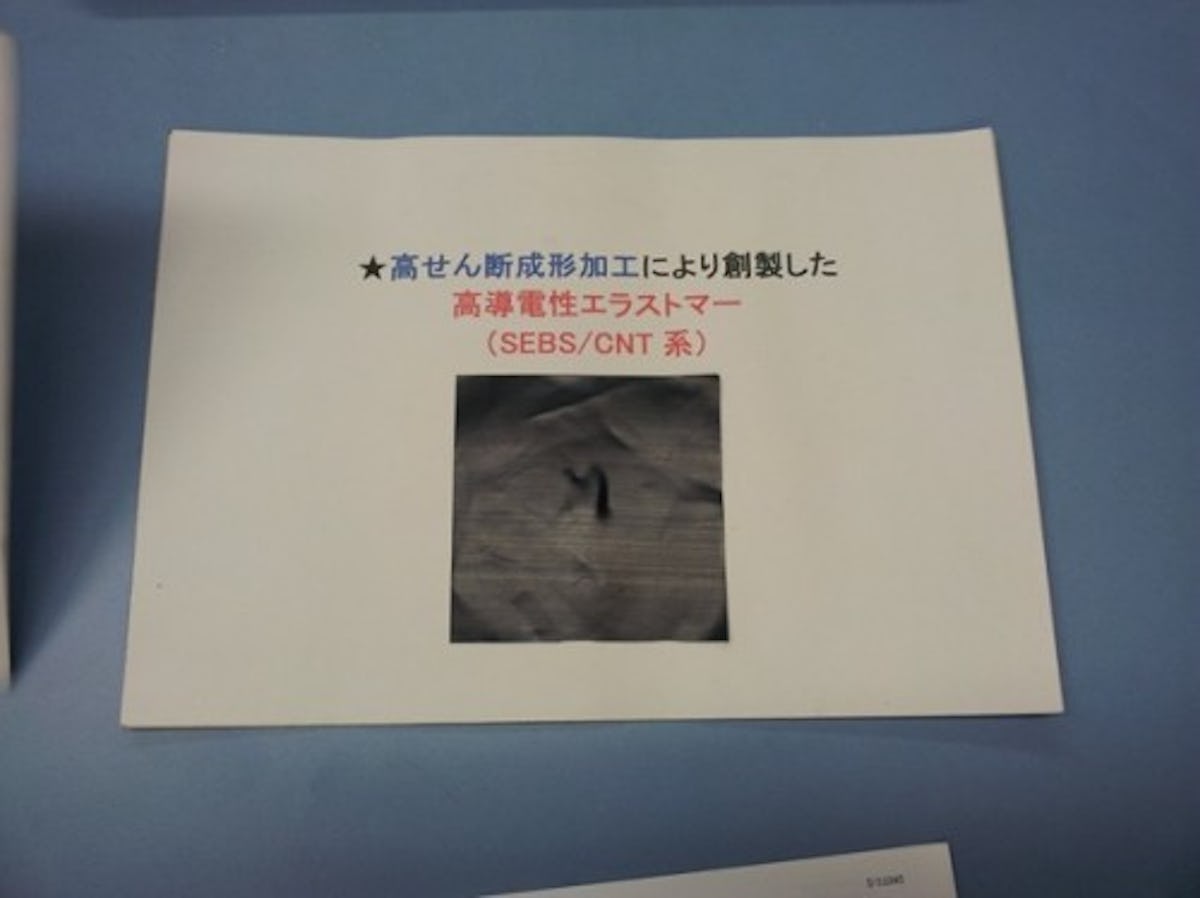 Nanoimprint (or nano-embossing) is now widely used to make optical films, for LEDs and solar panels in particular. However, there is still no obvious use of the technique to make electronic components. One of the main disadvantages of nanoimprint is the required etching step to remove any residual layer after the imprint step. In other words, it would not be possible to pattern an electronic circuit in a single step.
SK Electronics have developed both an imprint and stamping process which are not high resolution but compatible with large plate sizes. In the case of the stamping process, it is akin to a printing step and therefore does not require etching like nanoimprint. They claim they are already number one in photomasks for the display industry, offering masks up to Gen 10. This is another example of a Japanese company developing a new process for printed electronics.

There were very few examples of OLED displays during the expo, despite the presence of Sharp. The big display manufacturers prefer to showcase their OLED capabilities at events such as SID Display Week, or CES where there is usually much more media coverage and better marketing opportunities.
Clover Japan demonstrated some simple segmented OLED displays, clearly targeted at the automotive industry, as shown in the picture below. 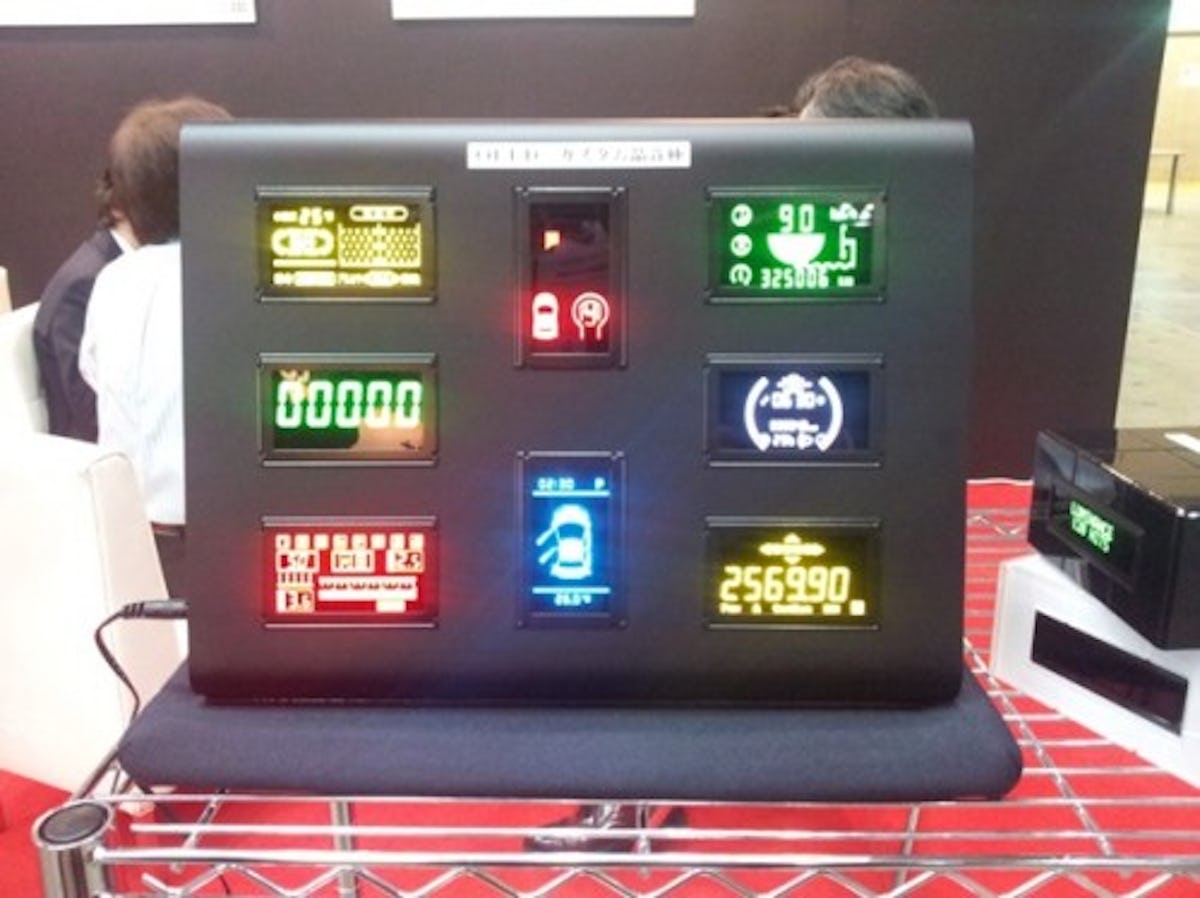 However, it was obvious that OLED was a topic of great interest, as evidenced by the range of materials and equipment being developed for this category of displays. The poster below is from JSR corporation: 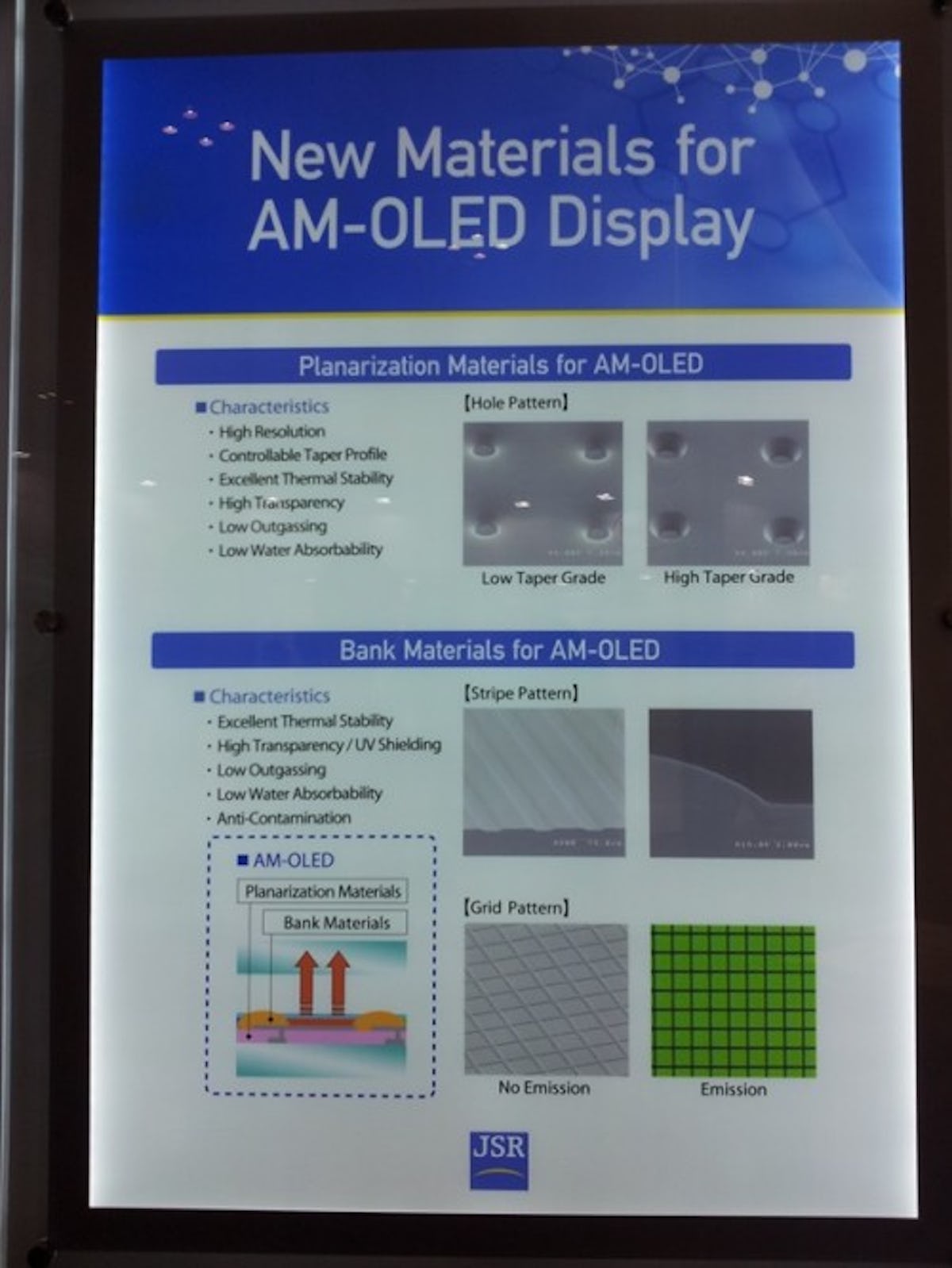 Daicel promoted their progress in encapsulation films, which are an essential components for flexible OLED displays: 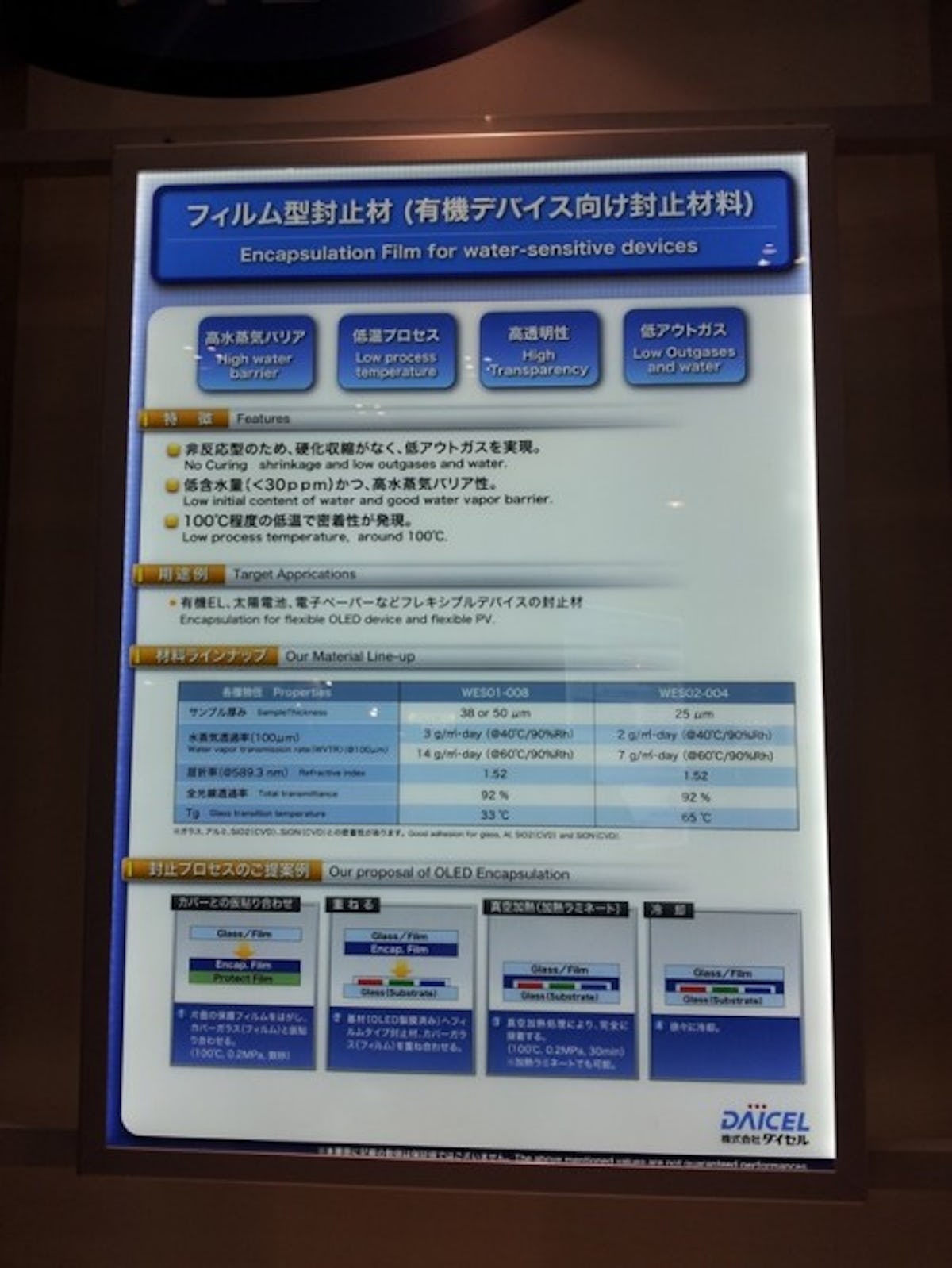 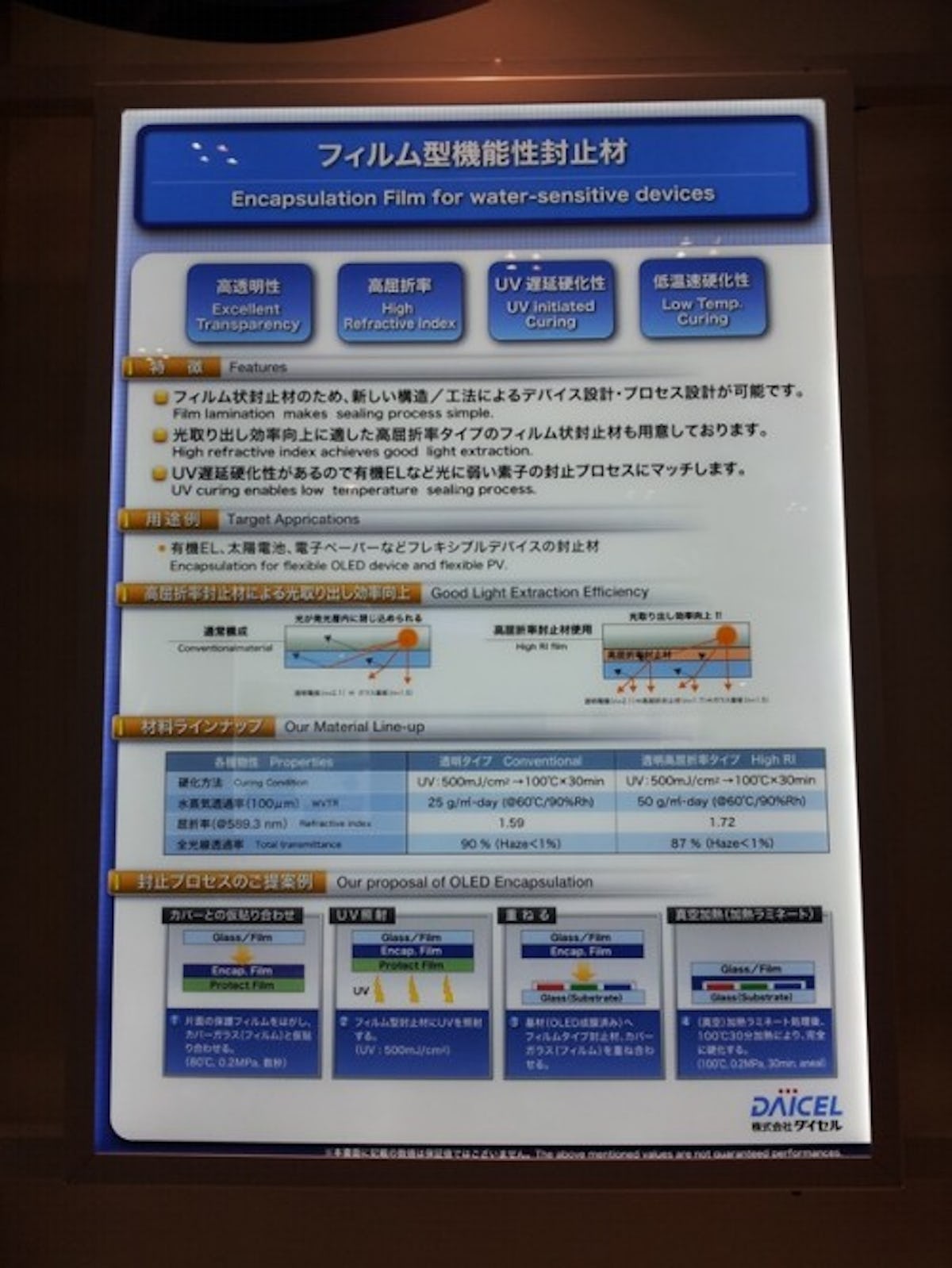 There were also several equipment suppliers offering dedicated system for OLED production. The example below is from Canon Tokki: 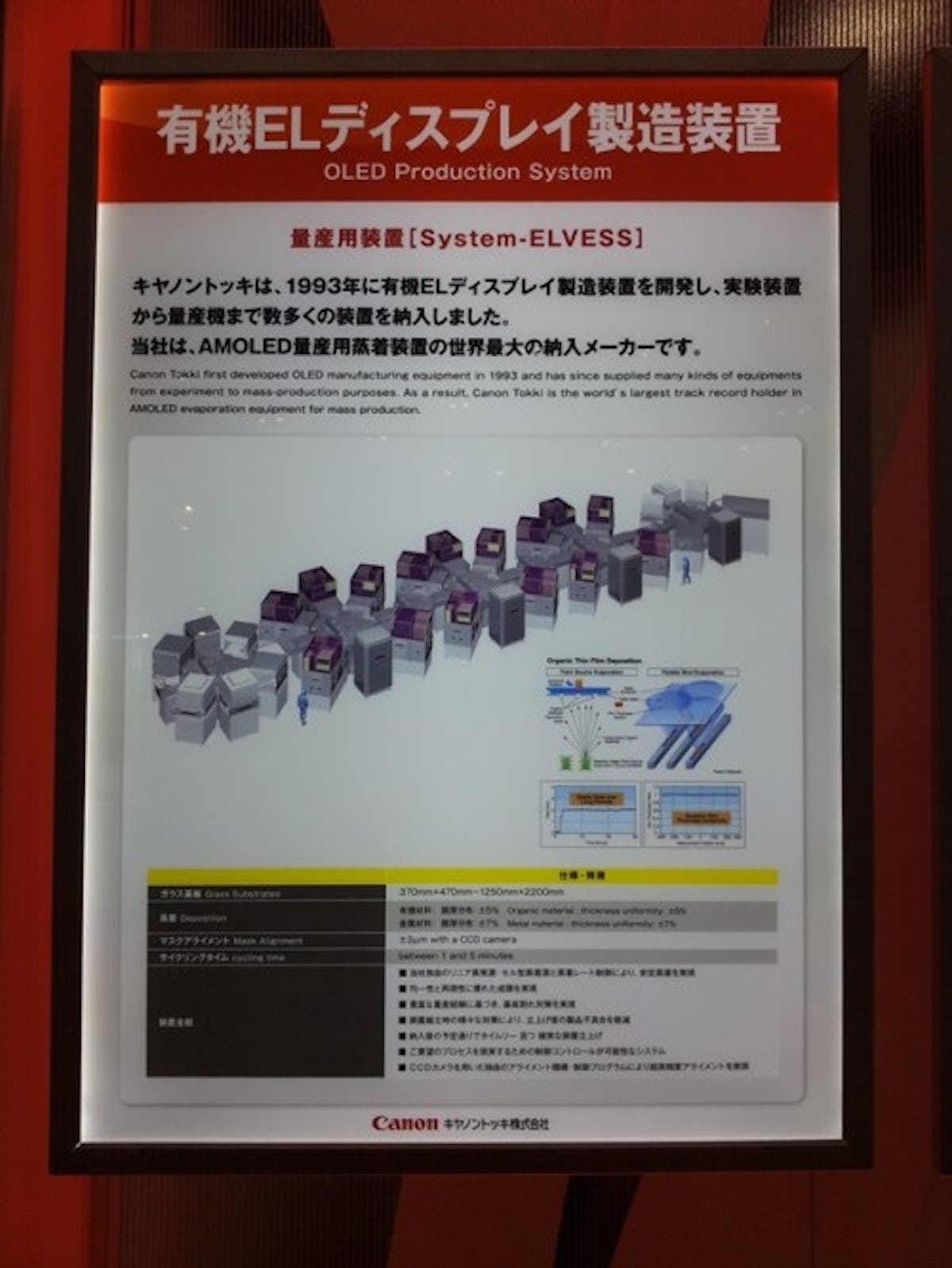