Electrowetting Could be a Disruptive Technology for End Users

While the amount of information that we digitally process ever increases many people still prefer to read from paper rather than electronic displays even though the cost is greater with printing.
Many companies are developing electronic paper, which combine the desirable viewing characteristics of conventional printed paper with the ability to manipulate the displayed information electronically. Electronic paper based on the electrophoretic motion of particles inside small capsules has been demonstrated and commercialized; but the response speed of such a system is rather slow, limited by the velocity of the particles.
Electrowetting
Philips Research in Eindhoven, the Netherlands have demonstrated that electrowetting is an attractive technology for the rapid manipulation of liquids on a micrometer scale and have shown that electrowetting can also be used to form the basis of a reflective display that is significantly faster than electrophoretic displays, so that video content can be displayed, something not possible with the more publicised electrophoretic displays to any practicable extent. A disadvantage is that electrowetted displays are not bistable ie they still need power even when the display image is not changing, whereas electrophoretic displays do not. However, IDTechEx believes that this is only a disadvantage when images are frozen for very long periods, notably with posters, billboards and signage or certain types of electronic label.
Electrowetting makes use of the natural forces intrinsic to an oil and water interface and methods developed for the manipulation of these forces. Separate oil and water phases are formed using a highly hydrophobic material which causes the water to be repelled from the surface, the oil film acting as an intermediate.
The wetting properties of the hydrophobic surface can be modified by the application of an electrical voltage (hence the name Electrowetting) and the surface becomes increasingly hydrophilic (wettable).
As the previously unwettable (hydrophobic) surface becomes increasingly attractive to the water, the oil is forced to adopt an alternative form. This manipulation of interfacial properties is what forms the basis of Electrowetting applications.
To form a display the principle of Electrowetting can be used to create a pixel modulator. The oil is colored with a dye which enables the creation of a display when different pixels are independently activated to make an image. The pixels, and therefore the display, can in principle be given any desired color.
A sample of the brilliant colors that can be made with the electro-wetting display technology. By varying the dye dissolved in the oil, an unlimited range of colors can be provided. 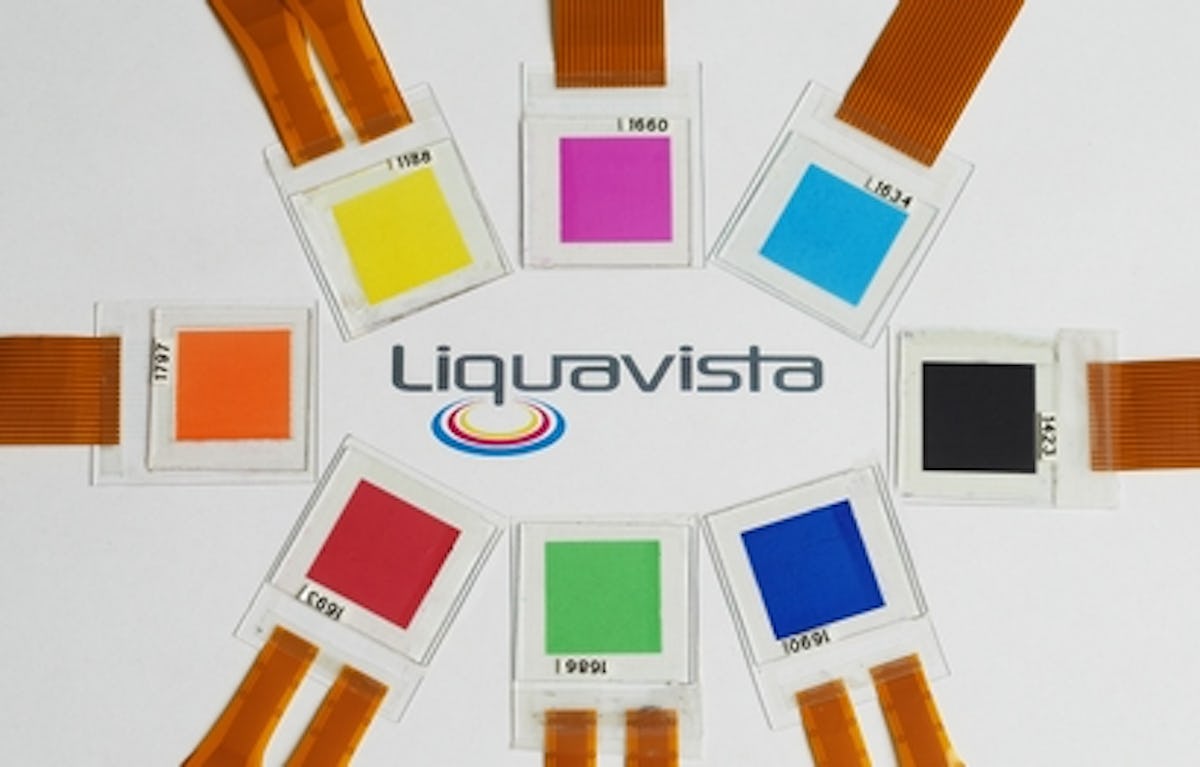 Source: Philips Research
Electrowetting has the same range and ability to show videos and full colour images as current LCD screens, while also addressing two main problems inherent in today's displays: poor readability in bright lighting conditions and high power consumption that drains batteries quickly.
Philips Research and New Venture Partners have created their first spin out, Liquavista B.V, which has been created to commercialize the market opportunities of Electrowetting displays.
Liquavista's electro-wetting displays (EWDs) are reflective rather than transmissive and so offer the potential for clear viewing in all lighting conditions, from a dimly lit office environment to the bright light of a sunny day, while consuming a tenth of the power of similar sized LCD screens. The opportunity for a new display technology that addresses these problems is huge, with today's global market for mobile displays, at 16 billion Euros and for LCD displays at over 62 billion Euros state Liquavista
Full color display performance
Table 1 compares the properties of the 3-layer electrowetting architecture with competing technologies. For reference, the properties of paper are also included.
Table 1 - Comparison of key performance parameters for various reflective technologies.