There are far more developers of inorganic compound photovoltaics than of organic versions in the world. In particular, there are more developers of copper indium gallium diselenide CIGS solar cells than for any other non-silicon technology. This is because its efficiency is superior to other printable alternatives such as CdTe, DSSC or organic photovoltaics and, in principle at least, it can be transparent (compatible with transparent inorganic transistors), lightweight, tightly rollable and low cost. Therefore it could be co-deposited and compatible with other leading edge printed electronics such as printed displays, batteries and so on. Nanosolar uses ink jet to print CIGS photovoltaics.
The largest number of non silicon PV developers is in the USA as shown below, with early figures gathered by IDTechEx. New data continues to come in but the relative emphasis stays the same. 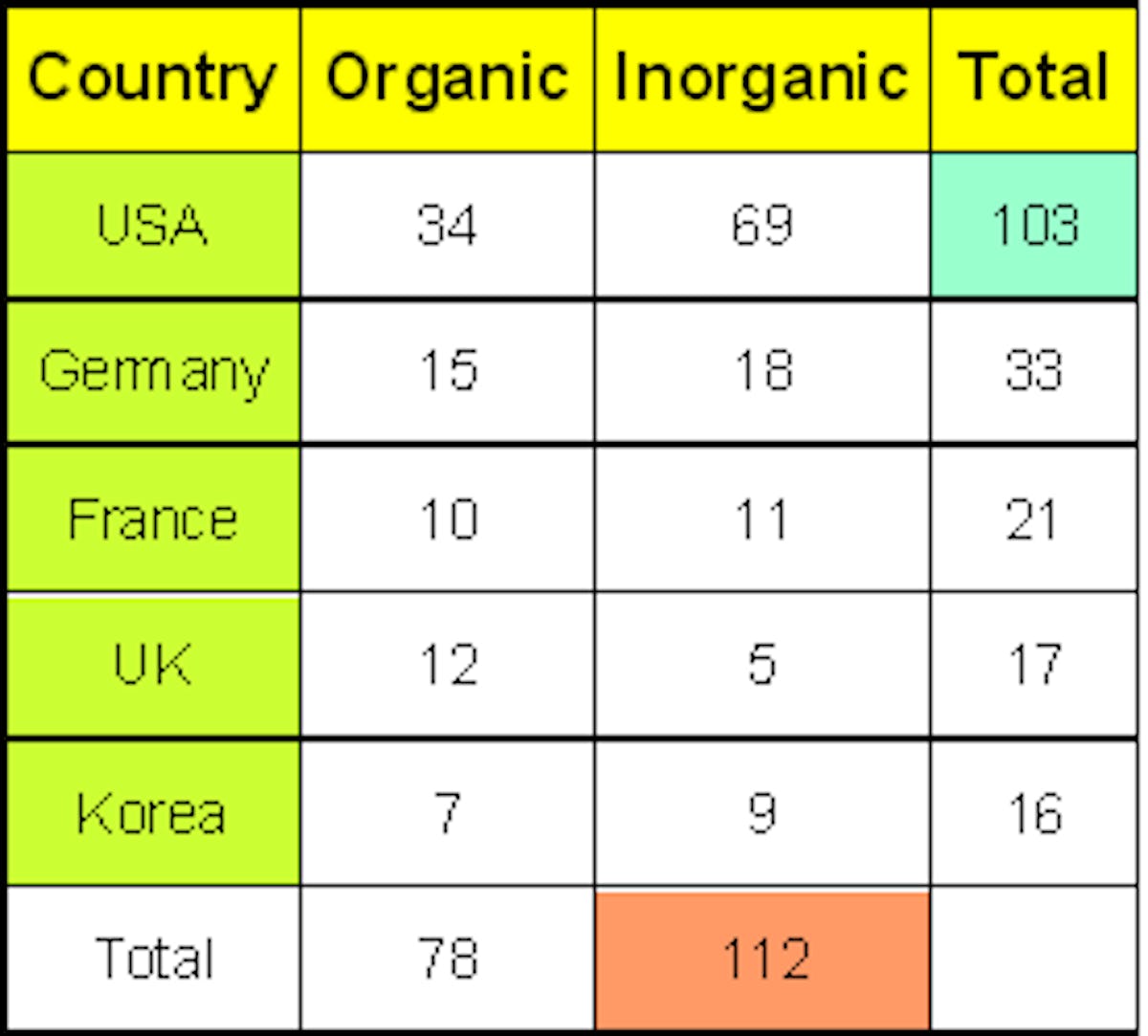 Source IDTechEx
Ascent Solar joins the fray
The latest news on CIGS is that Ascent Solar, of Littleton Colorado in the USA, now says that the secret to producing thin-film solar cells comes in part from the snack food industry. It will deploy high-speed thermal evaporators - the same equipment used to seal Doritos bags - to produce CIGS. Ascent Solar will spray the active CIGS material onto a polymer sheet in a reel to reel process. The evaporating equipment will heat up the coated polymer sheet rapidly to eliminate liquid carriers and to fix the CIGS material in place. Ascent will then slice the sheets. The resulting products are intended to be integrated into roof tiles, building materials or traditional solar panels. Ascent Solar will receive equipment and start to build a prototyping plant in September 2007. It will be running by the first quarter of 2008.
"You can do rapid thermal evaporation. The CIGS is what slows it down," said CEO Matt Foster as reported in CNET News this month. His evaporation equipment is supplied by General Vacuum of Manchester, UK.
Ascent is mixing old and new ideas from the nascent CIGS photovoltaic industry because CIGS cells have been made by vapor phase deposition or RF sputtering, both slow and expensive batch processes, at least initially. Some players improved on this by roll-to-roll manufacturing. For example, Miasole sputters the material onto metal or polymer substrate in a roll-to-roll process. Nanosolar wants to print CIGS onto rolls of materials. Solopower is combining electroplating with roll-to-roll processes. HelioVolt has developed what it calls the FASST process. Now Ascent Solar is combining a proven CIGS process with roll-to-roll manufacturing.
"CIGS is hard enough to do without (moving away from) a proven process," Foster said.
Meanwhile, companies such as Lumoflex, BASF and Bosch are seeking to commercialise organic photovoltaics.
For more information read the reports Printed Photovoltaics and Batteries and Introduction to Printed Electronics.
Also attend Printed Electronics Asia 2007 or Printed Electronics USA 2007