Printed electronics will eventually interest a high proportion of the seven billion people that will be on the planet because it will transform their lives. It will eventually involve over 100,000 manufacturers. Today, printed and potentially printed electronics is already of interest to over 10,000 organisations. Most are on the edge of the subject, for example developing or using printed conductors or the subsystems that use them such as heaters or touch keyboards. The hard core of the industry consists of about 1500 organisations developing printed electrical and electronic devices such as transistors, lasers, displays, batteries and lighting. About 500 of these are in North America, 550 in Europe, 400 in East Asia and 50 elsewhere, such as Australasia and Russia. Roughly 40% are universities and research institutes that will never sell a product and the other 60% are manufacturers and putative manufacturers. In these organisations, about 15,000 people are working on printed electronic devices. 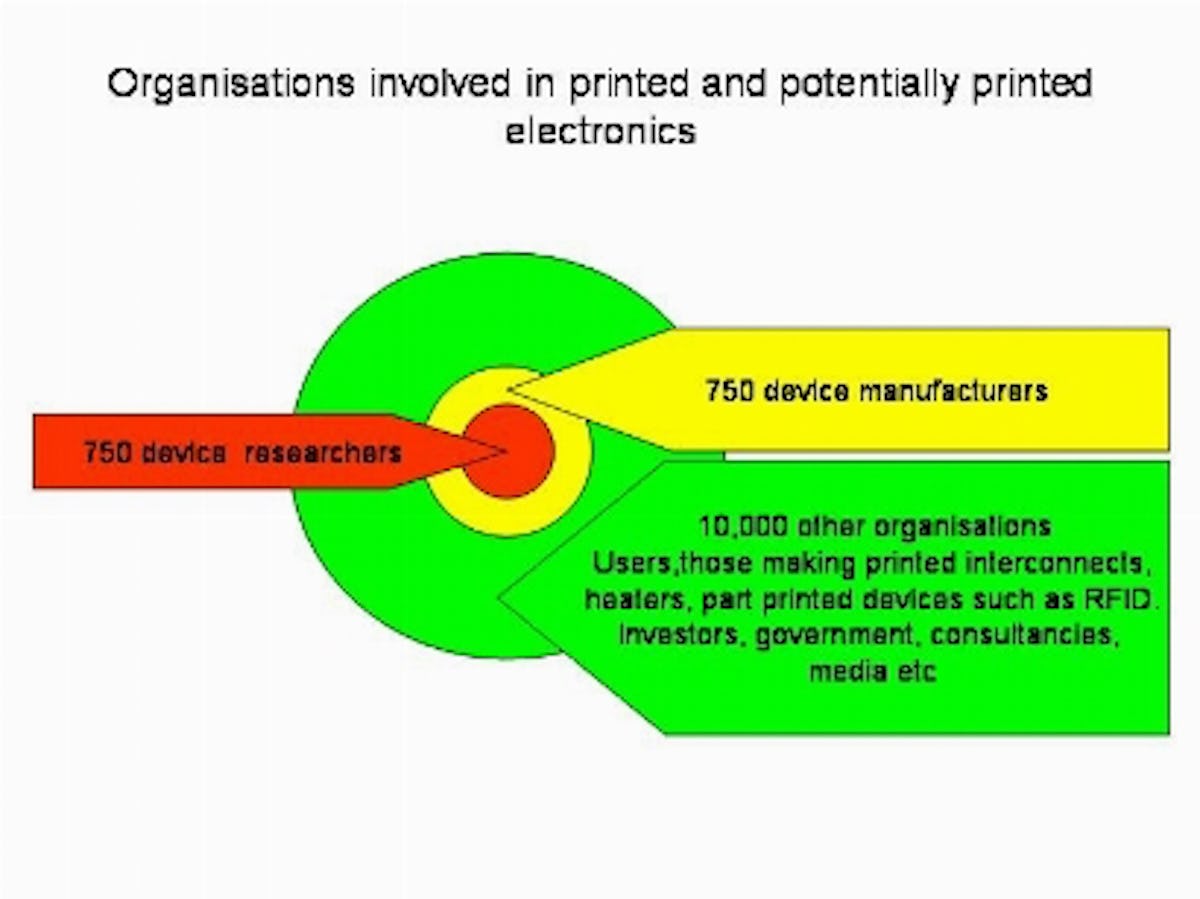 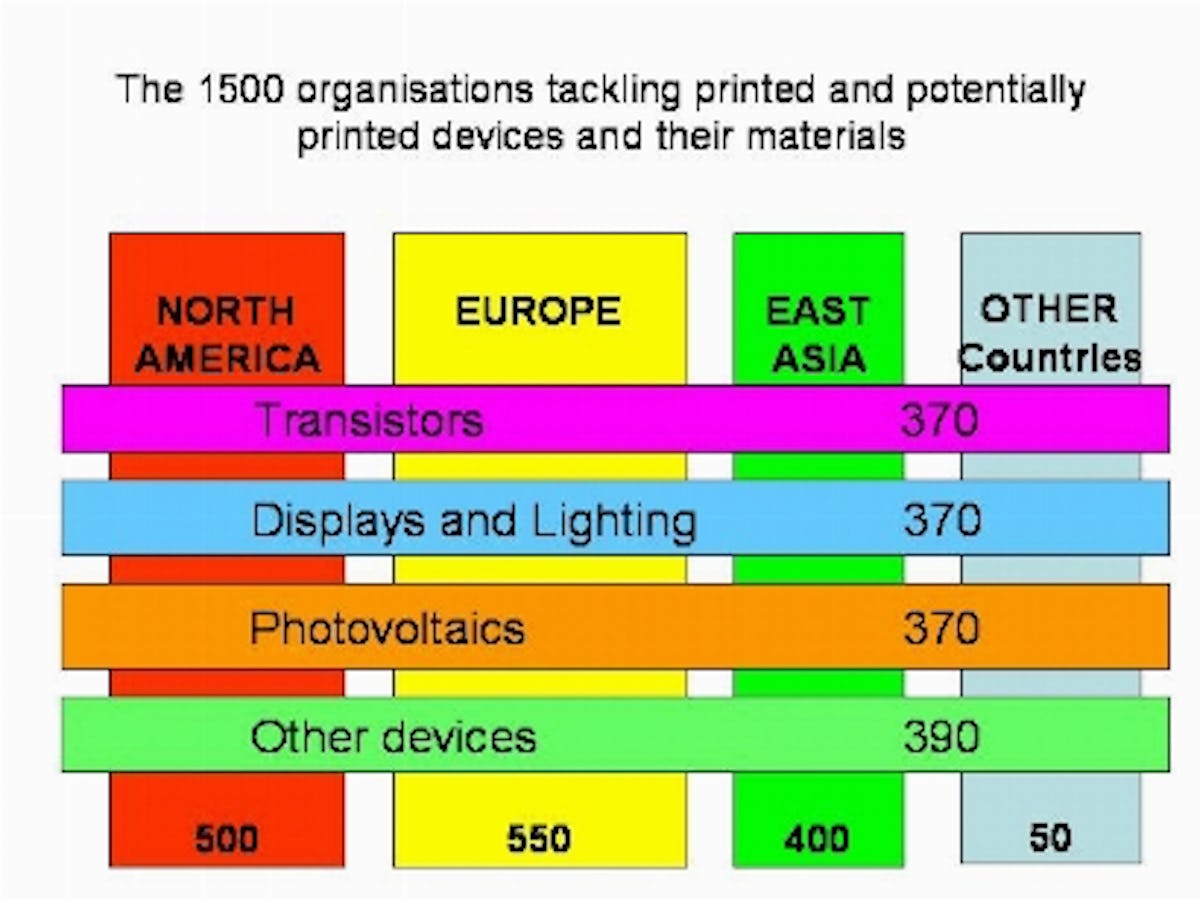 Source: IDTechEx
The smaller number of organisations in East Asia does not represent less expenditure, ambition and effort in the subject. It is because more of the giant companies of the region are involved, as exemplified below. Similarly, Europe having more research organisations than North America that are studying the subject does nor mean that Europe is ahead in commercialisation or even investment.
Examples of giant corporations developing the printed and potentially printed devices with the largest market potential are shown below. This excludes those interested only in materials. It includes those giants with key intellectual property in such devices, that may or may not manufacture them in due course. See how the giants in East Asia are heavily involved while most of the giants in the West have yet to see the opportunity. In materials supply, the Western giants - not shown here - are much more active. 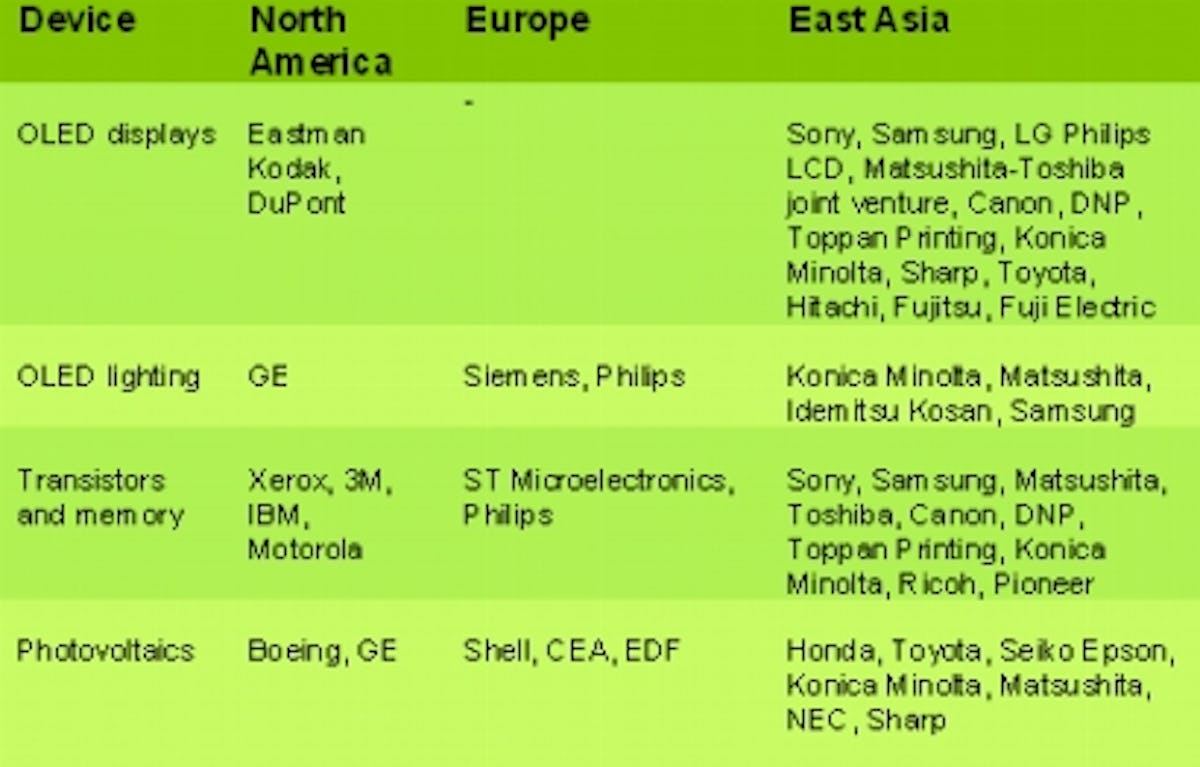 OLED = Organic Light Emitting Diode, a form of laminar display, signage or lighting
Source: IDTechEx
Across the world, the strong sectors differ. East Asia is highly likely to retain the lion's share of the display manufacturing business as displays increasingly become printed and flexible. The breadth and depth of the photovoltaic work in Europe and North America is very impressive, even involving substantial subsidies for using the devices. However, a lot is going on in this subject in East Asia too.
North America is spawning the majority of startups in printed and potentially printed electronics that seek to become billion dollar businesses and have strong financing. However, acquisitions and consolidation have scarcely begun and technical breakthroughs are coming thick and fast. It is not too late to participate.
With its technical and marketing analysis for clients, its conferences in the three major territories and its publications, IDTechEx is helping clients to navigate this complex and exciting new industry.
In late 2007, we have even completed three reports on respectively Printed Electronics in East Asia, Europe and North America that look closely at over 550 of these organizations, their achievements and their intentions.