The Apple Watch was officially announced earlier this month, with the promise that it will come with a flexible display. However, there is some confusion about what the term means and what the benefits are for consumers. Dr Guillaume Chansin, co-author of the IDTechEx report "OLED Display Forecasts 2014-2024: the rise of plastic and flexible displays" gives his view on flexible displays.
"Flexible Retina": this is how Apple describes the display inside its new smart watch. What does it mean? Well, it will have a high pixel density of at least 300 ppi so that it will be impossible for a human being to discern individual pixels. And it will be flexible. And by that they probably mean rigid.
Confused?
The term flexible display has been used loosely by manufacturers to designate displays that are made on plastic sheets instead of glass. If you are reading this on a laptop or a tablet, your screen has been manufactured on a glass plate and therefore does not qualify as flexible. However, some OLED displays are now made on plastic. 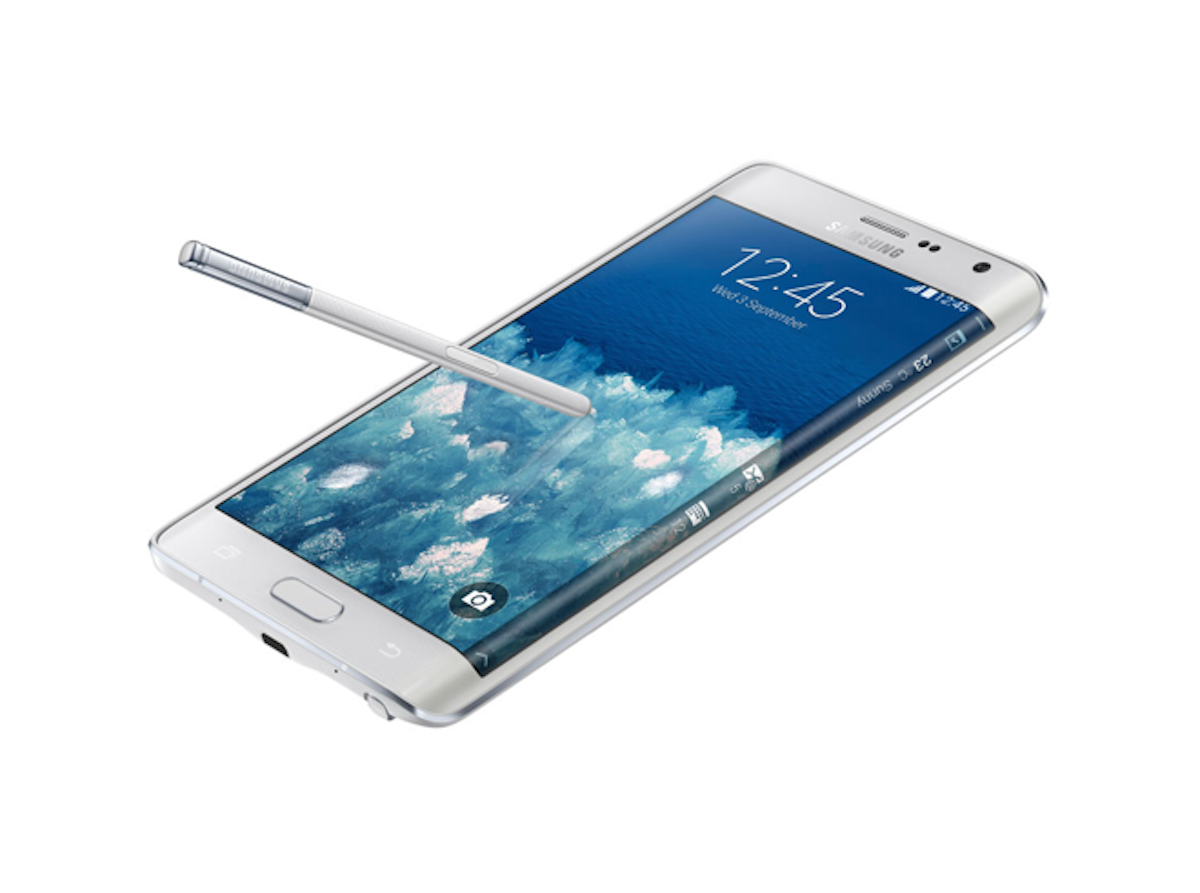 Source: Samsung
For instance, at the recent IFA show in Berlin both Samsung and LG announced new products using this new display technology: Samsung launched the Galaxy Note Edge with a wrap-around display (pictured) while LG unveiled a new smart watch called the G Watch R. In both devices, the "flexible" OLED displays are actually rigid, in the sense that they are not designed to be bent by consumers. I prefer to call these "rigid plastic" displays because this is only the first step towards true flexible displays - displays that you will be able to bend, roll or fold.
The Apple Watch does not have a bendable screen, so at best it will be a rigid plastic display in there, something similar to what LG did with the G Watch R.
So what is the point, you might ask? Well, replacing the glass substrate with a plastic one results in a much thinner and lighter display. For a smart watch, it means a more comfortable weight, a sleeker design or simply more space for a slightly bigger battery. It also means that the display is much less fragile since there is no glass to break.
This technology has been in development for a very long time and now products are finally coming to market. The Apple Watch is yet another sign that we are going to see a rapid adoption by major OEMs. Display manufacturers are betting their money on this and the race is on to be amongst the few suppliers who can mass produce OLED on plastic. As shown in the chart below, this market is projected to grow within the next six years to $16 billion, which is more than what the global OLED display industry is worth today. 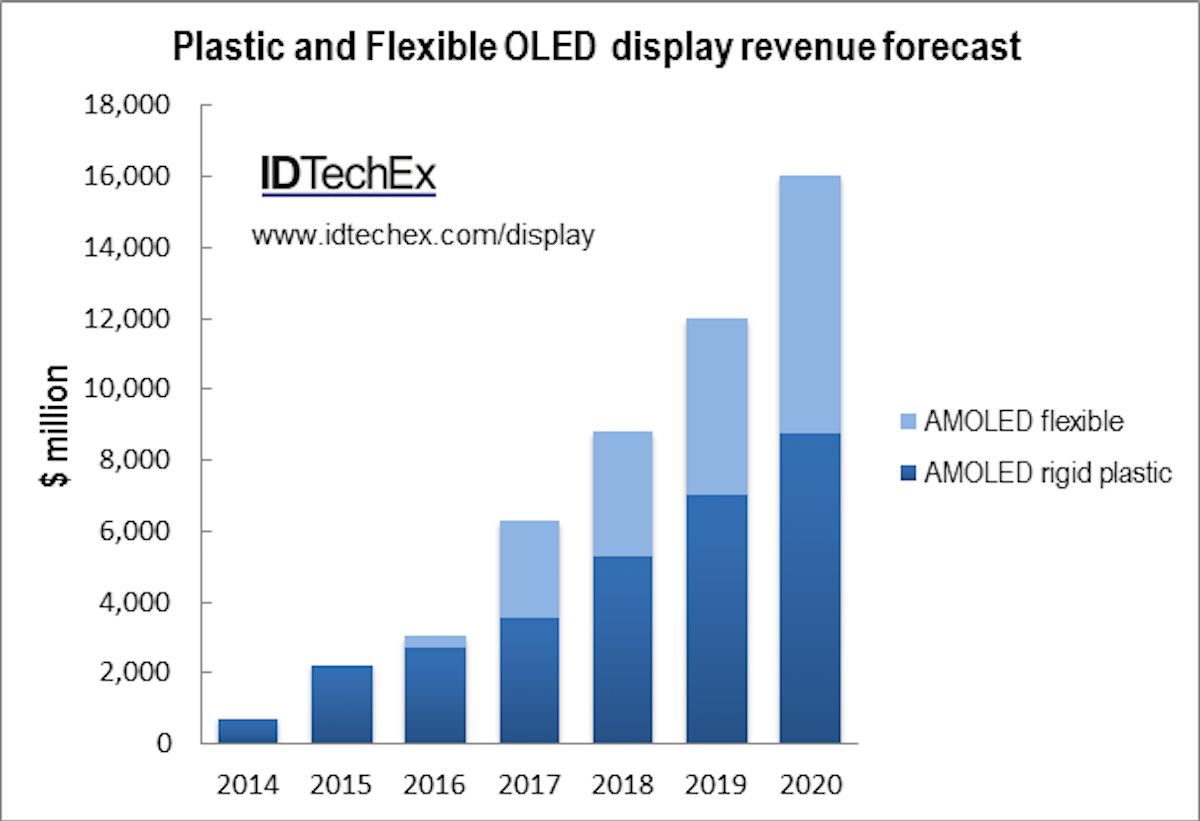 Source: "OLED Display Forecasts 2014-2024: the rise of plastic and flexible displays"
In a few years' time, we can expect devices where the mechanical flexibility of the display will be an integral part of the user experience. The challenge for manufacturers is to develop a technology that will be reliable enough. To make a display on plastic is one thing, but to make a foldable display is a much more difficult task. Without going too technical, folding a plastic display in two can break the internal circuitry that drives each of the individual pixels (and no one likes dead pixels nowadays). Therefore, engineers have to consider every material used in the display and test how far these can be bent.
There are already several solutions being developed. In a previous post, I mentioned that UK-based Plastic Logic was now working on flexible OLED displays in collaboration with Novaled in Germany. The company say that their organic thin film transistors (OTFT) can enable a level of flexibility that cannot be achieved with any other technology. 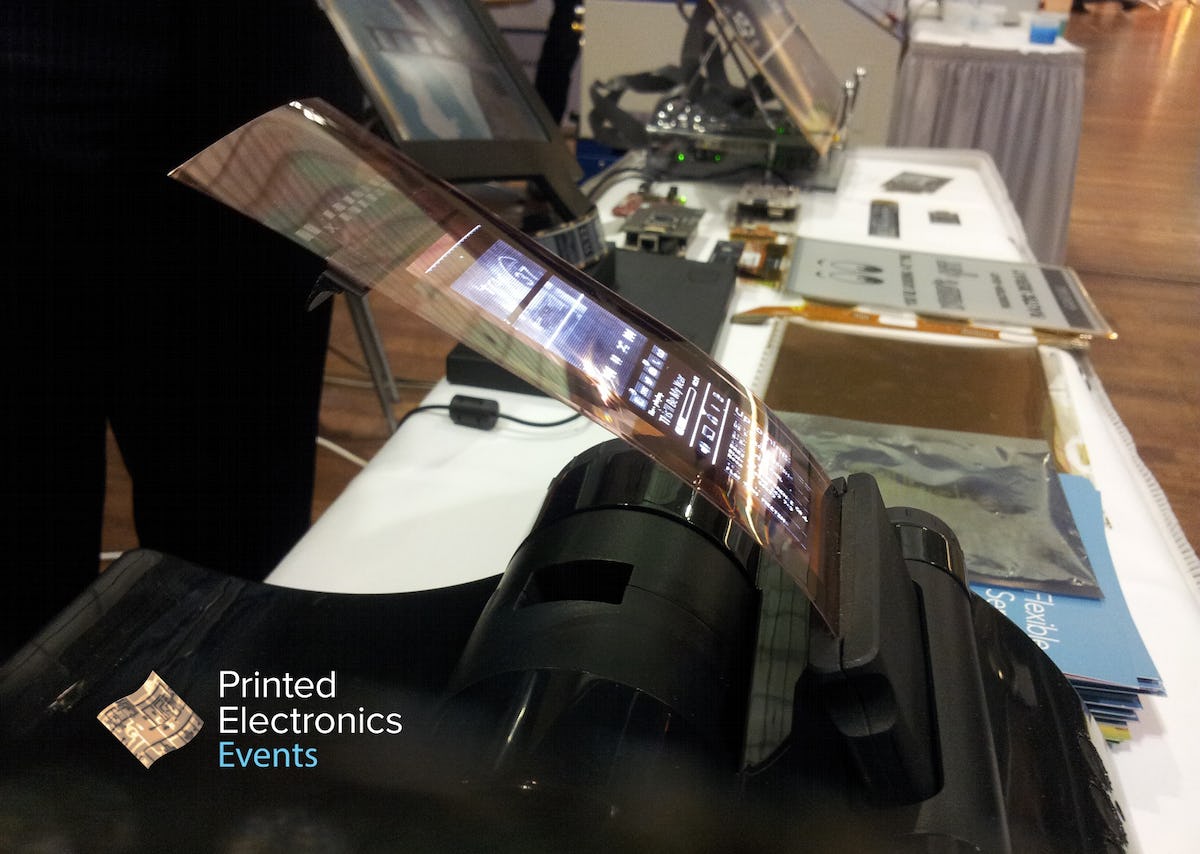 Source: Printed Electronics World (article)
One of the most impressive demonstrations so far was given by the Semiconductor Energy Laboratory (SEL) and Nokia. At the SID symposium this year, they showed a working prototype of a flexible OLED display that can fold onto itself. The transistors in the display were made with a metal oxide semiconductor commonly referred as IGZO (for indium gallium zinc oxide). According to the researchers, the folding line had a radius of curvature that was only 4 mm (watch the video below to see it for yourself).
Now, who would not want a phone that can do that?
Dr Guillaume Chansin is a Technology Analyst with IDTechEx. He will present the webinar "Flexible Displays & Flexible Sensors" on 25 September. For more information on the webinar and to register for free, go to the IDTechEx webinar page.
(Top image source: LG Display)