The incidence of skin cancer is growing rapidly and now affects 15% of the UK population, 40% of the American, and 75% of the Australian populations during their lifetimes. This equates to approximately 220m people.
Lumicure are looking at transforming the treatment of skin cancer and with researchers at the University of St Andrews and Ninewells Hospital, Dundee have developed and tested a wearable new light-emitting 'sticking plaster' that will revolutionise the treatment of skin cancer. The new device, which builds on established photodynamic therapy treatment (PDT) methods, not only reduces pain but has the potential to be used by GP's or patients in their own home.
Photodynamic therapy (PDT) involves the use of light in combination with a photosensitizing agent (in this case a pharmaceutical cream) to treat a tumour. The cream contains amino-laevulinic acid which is metabolised to a porphyrin. The porphyrin absorbs the light, leading to a photochemical reaction which kills the tumour. Current light sources are lasers or very large and powerful lamps, and the patient has to sit very still under them. Although it's very attractive compared with surgery, some patients experience a lot of pain. However, a very good feature is that the porphyrin preferentially forms in the tumour, giving excellent selectivity. You can see this in the photograph - on the left is a skin cancer, and on the right is the same lesion illuminated by ultraviolet light. The red fluorescence of the porphyrin marks out the tumour. It's so clear it's sometimes used for diagnosis as well as for treatment. 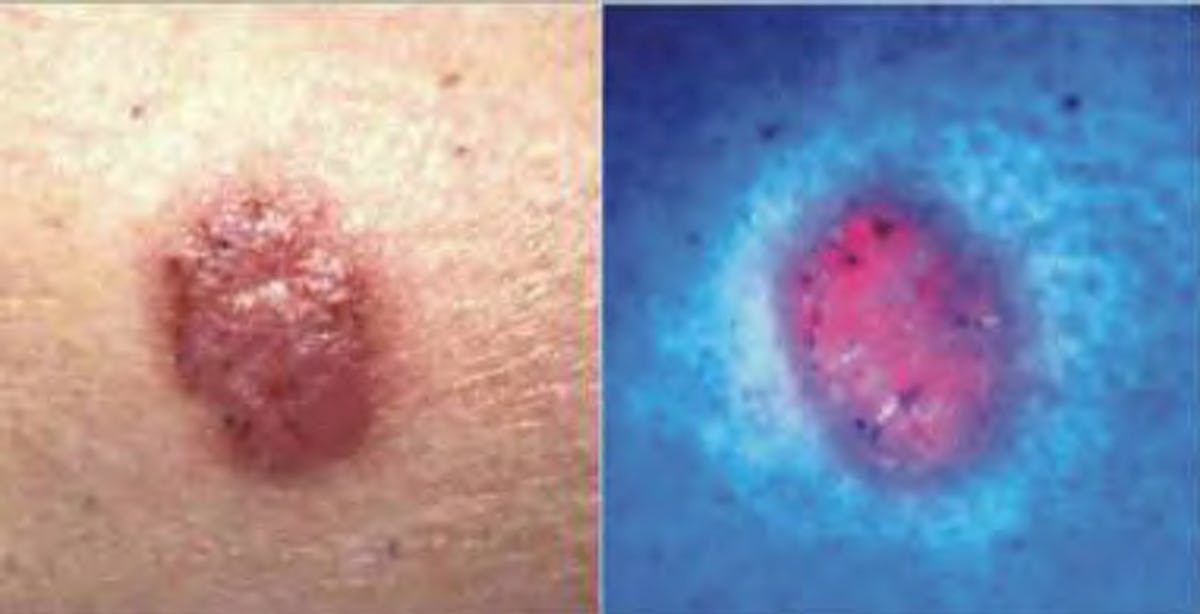 On the left is a photo of a typical skin cancer; on the right is the same lesion showing porphyrin fluorescence under ultraviolet light.
The compact light-emitting "sticking plaster" can be worn by the patient while the battery is carried like an iPod. The light is generated by an organic light-emitting diode, (OLED) and is a spin-off of Professor Samuel's work on advanced displays. Initial pilot trials have already shown its effectiveness and patients are already requesting this treatment over conventional methods.
"We envisage a disposable light source for OLED-PDT with a retail price in the region of 100 pounds ($200). Our approach is much less staff intensive than the alternatives, and does not need dedicated hospital space, so overall it could substantially reduce the cost of skin cancer treatment, whilst also providing a means to deal with a rapidly growing problem," Professor Samuel told UKDL Newsletter.
In addition to the treatment of skin cancers such as superficial basal cell carcinomas, which are very common, the researchers believe that the technology could also be used in the cosmetic industry, for anti-aging treatments or for conditions such as acne - it is not suitable for the rare melanomas because they are so opaque.
The regulatory issues for medical devices still need to be addressed which will involve a small amount of additional design work and this will be followed by further trials. Lumicure are looking for manufacturers and hope to launch the light emitting "sticking plaster" (band aid) at the end of 2009.
The patented technology was developed with support from Scottish Enterprise Proof of Concept funding and has been licensed to Lumicure Ltd (a spin-out company from the University of St Andrews and NHS Tayside), which is currently in discussions with venture capitalists to raise equity funds to commercialise the product.
References: University of St Andrews, UKDL Newsletter
Source of top image: University of St Andrews
For information on the Printed Electronics industry attend Printed Electronics USA