Breakthrough in inspection of organic electronics

We are increasingly seeing demonstrations, samples and first products of printed electronic transistors and other products. Companies are focusing on yield improvements and a necessary part of this is adequate inspection of devices, preferably at high speed.
Normally this is done by shining a beam of light onto the surface, with the reflected image recorded by a camera, as shown on the left in Figure 1a below. However sometimes upon inspection, while the image would suggest there is no conductor present, conductive material may actually be there causing a short circuit. This occurs when the surface of the conductor is not flat and perpendicular to the camera (increasingly so as people work on flexible substrates), the incident light is reflected off at an angle and not detected by the camera, as seen by the image on the right in Figure 1b below.
Figure 1A (left) and (Figure 1B right) 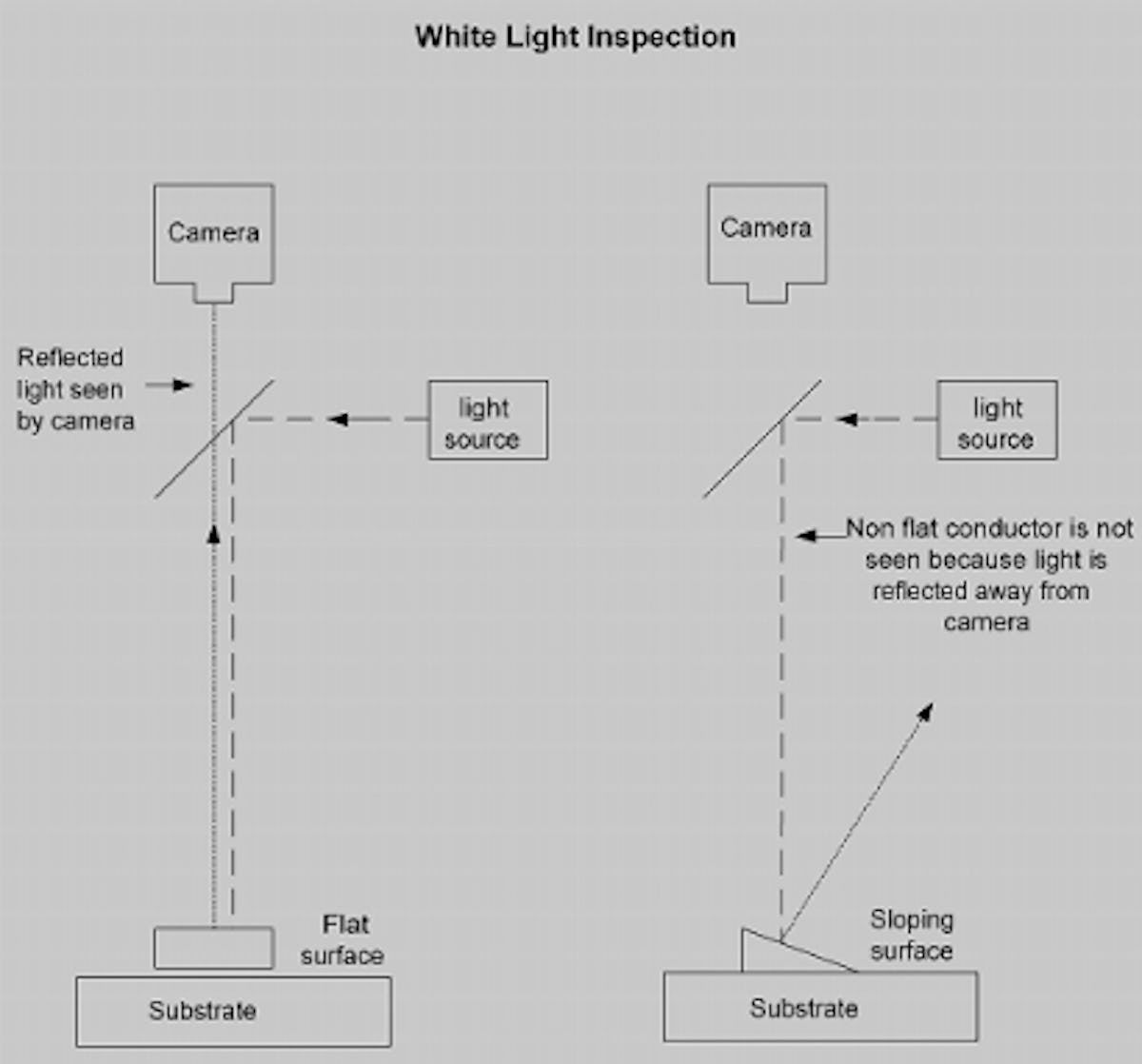 Beltronics Inc., a Massachusetts based automated optical inspection company, has patented an inspection system to overcome this problem. Organic materials used in fabrication of organic electronic components slightly fluoresce. This fluorescence is created at the surface of the material and therefore unlike the incident light it is transmitted in all directions. Beltronics has devised a way to detect this slight fluorescence and therefore the presence of organic material, as shown in Figure 2. Metal conductors which do not fluoresce appear dark and the organic substrate appears bright independent of curvature, angle or flatness of the substrate. Organic material as thin as an incredible 410 angstroms has been detected using this technology. 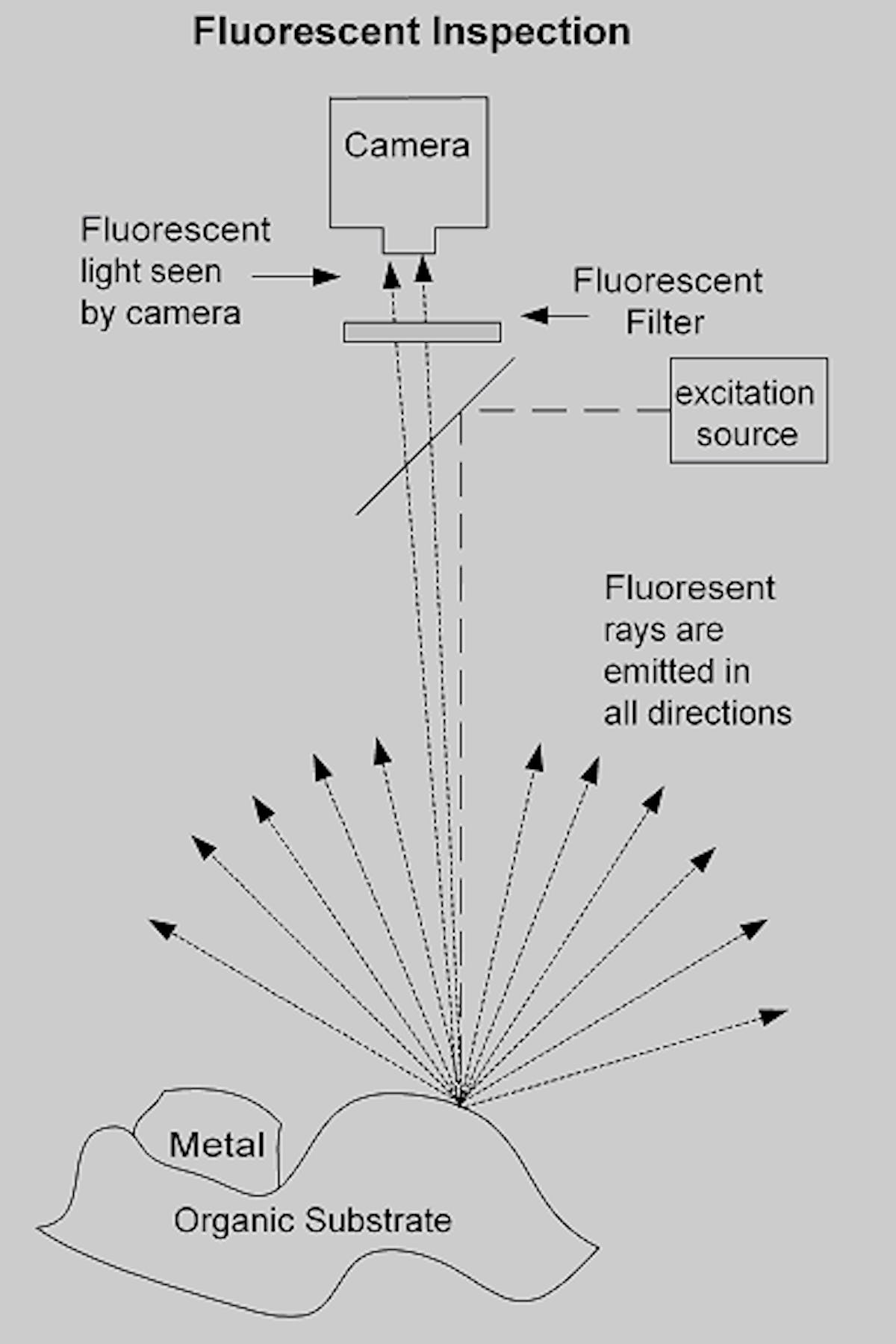 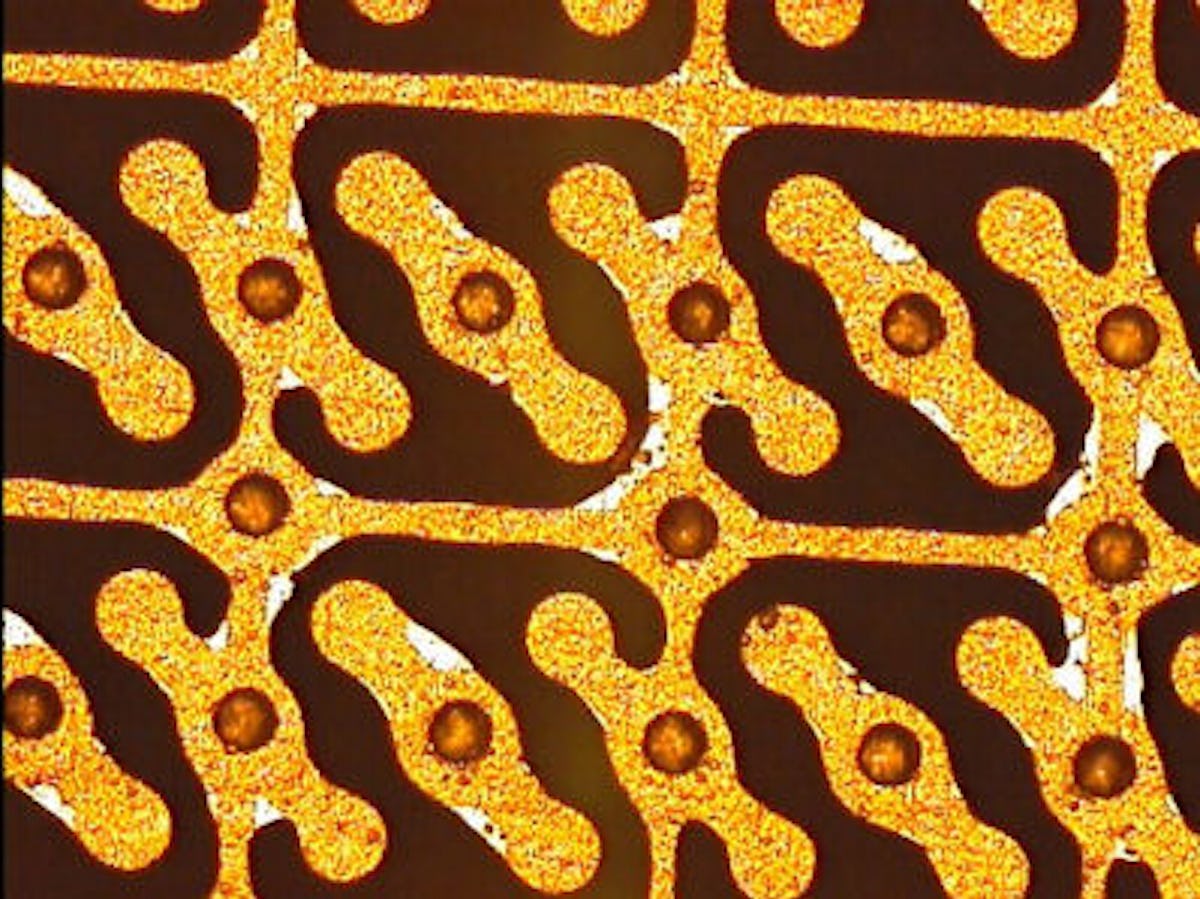 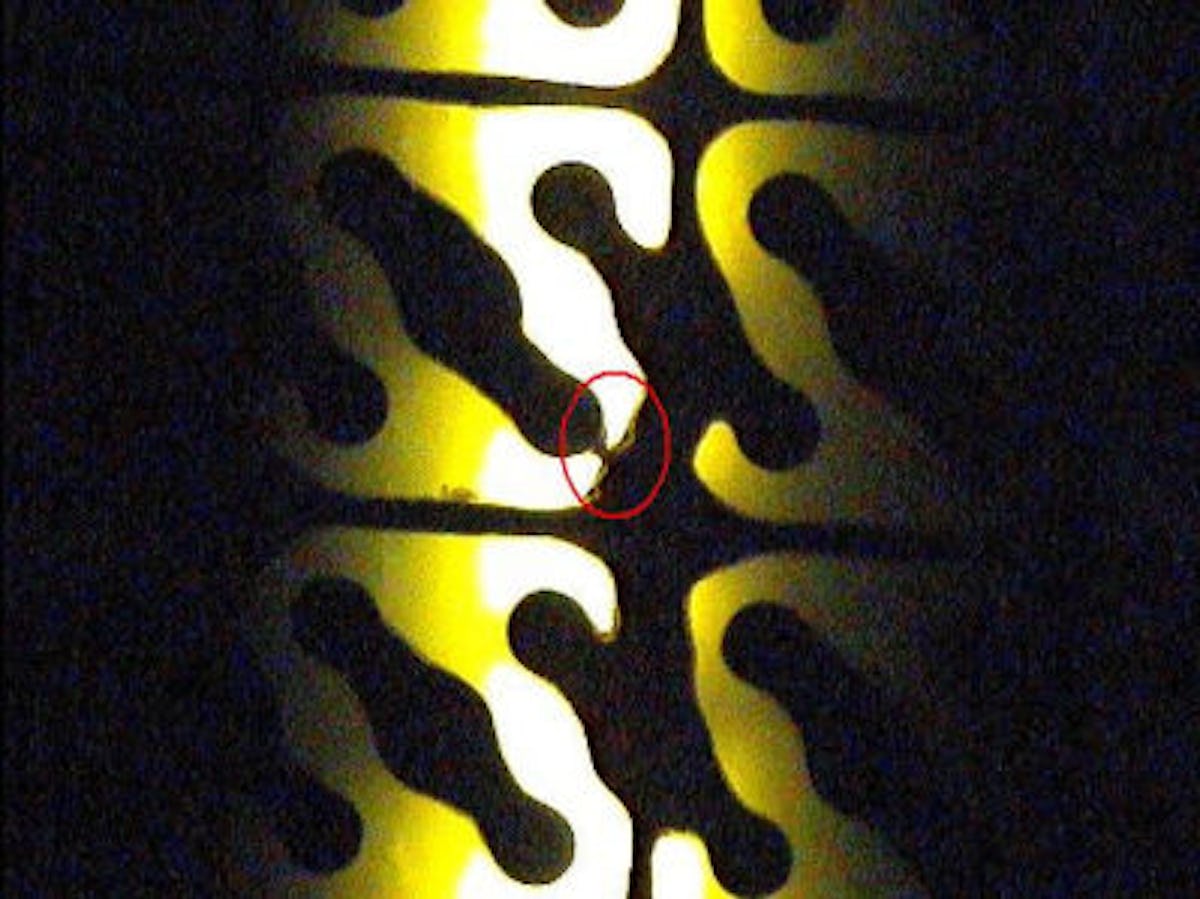 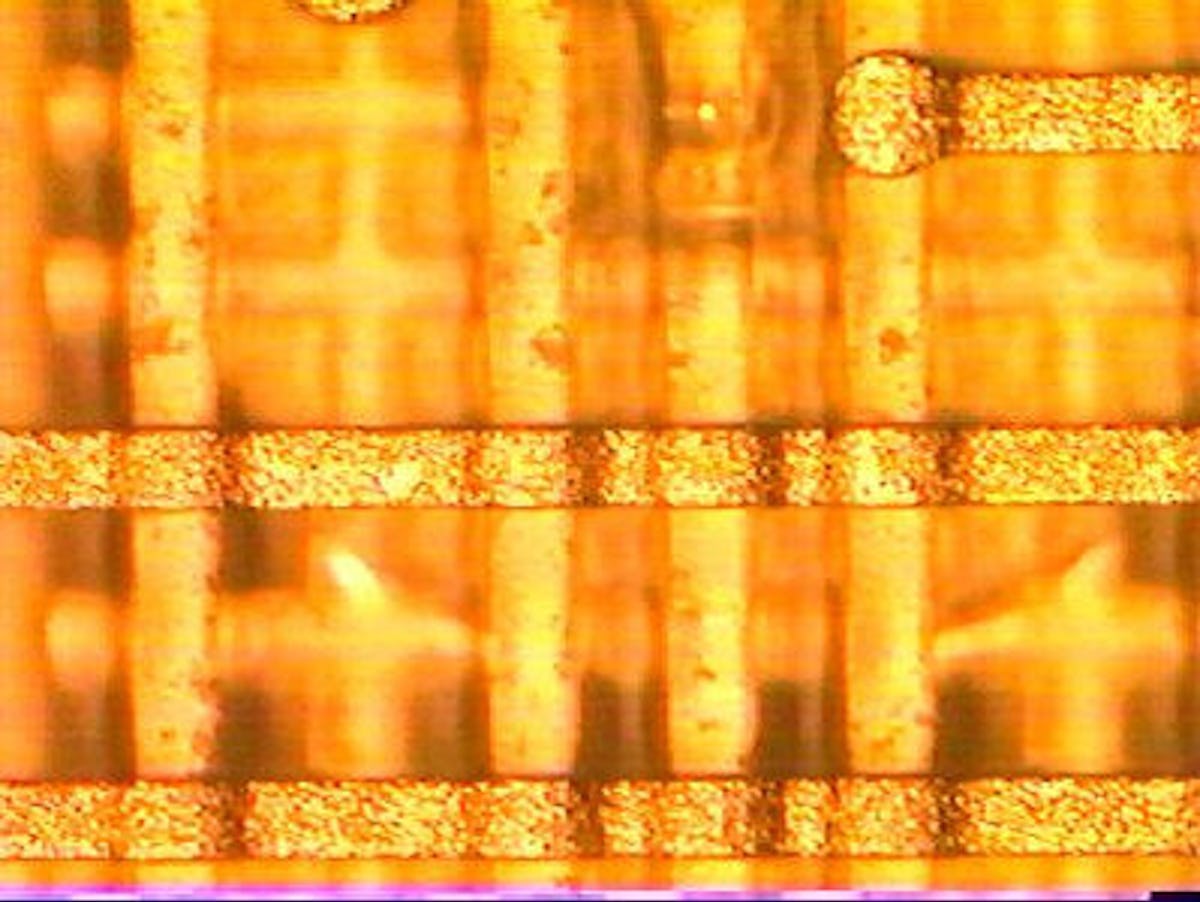 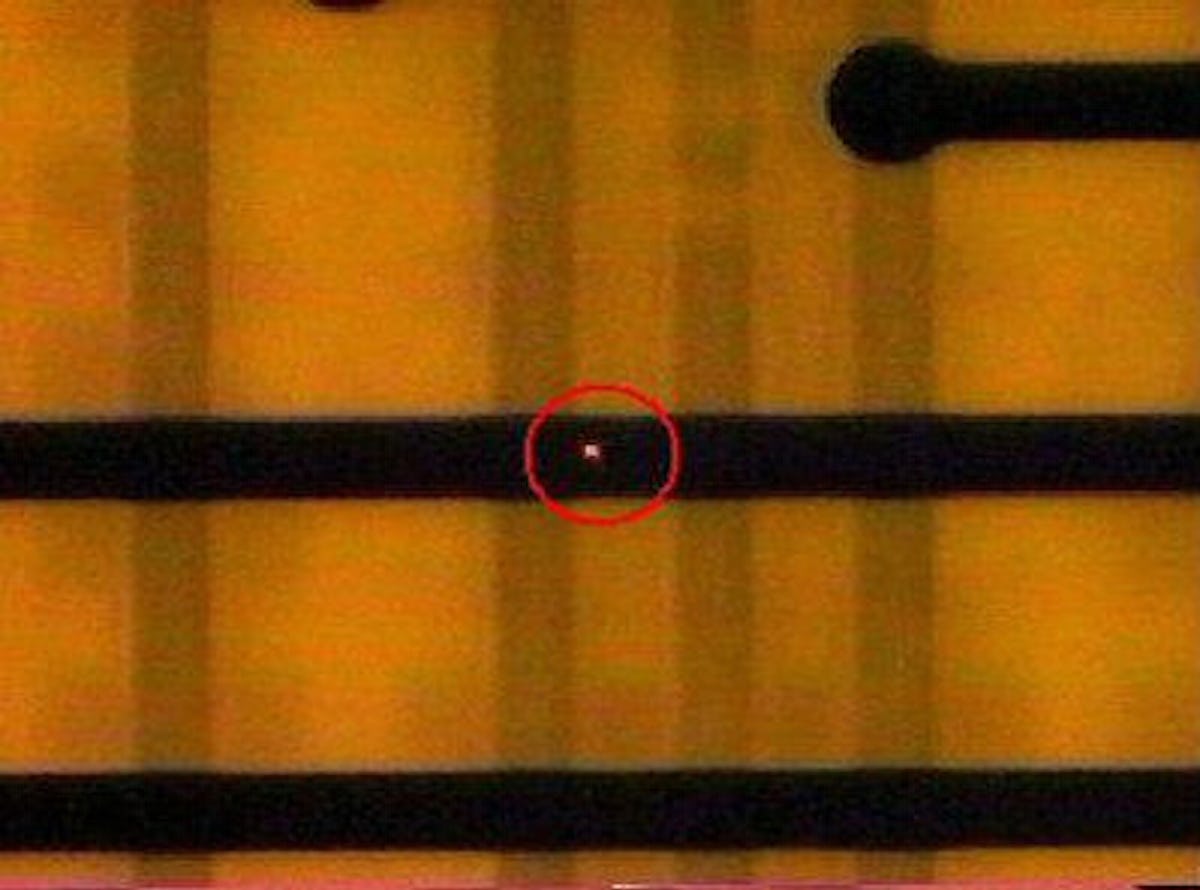 Source: Beltronics
To increase and maintain high yields, a production process should be continually monitored to rapidly detect, identify and eliminate any source of defects. Many metal defects originate as defects in the resist pattern prior to metal etch. Unfortunately, most resists have low contrast or are optically clear making it impossible to visually detect such imperfections. Figure 5a shows the reflected light image of a clear resist line pattern deposited on a non-planar metallic surface. The dark bands in Figure 5a are due to changes in metal topology. Beltronics has been able to induce fluorescence in many resists as shown in Figure 5b, which reveals a line narrowing notch in one of the conductors. Resist can be easily removed and reapplied prior to metal etch thereby effectively eliminating the defect before it is fabricated. 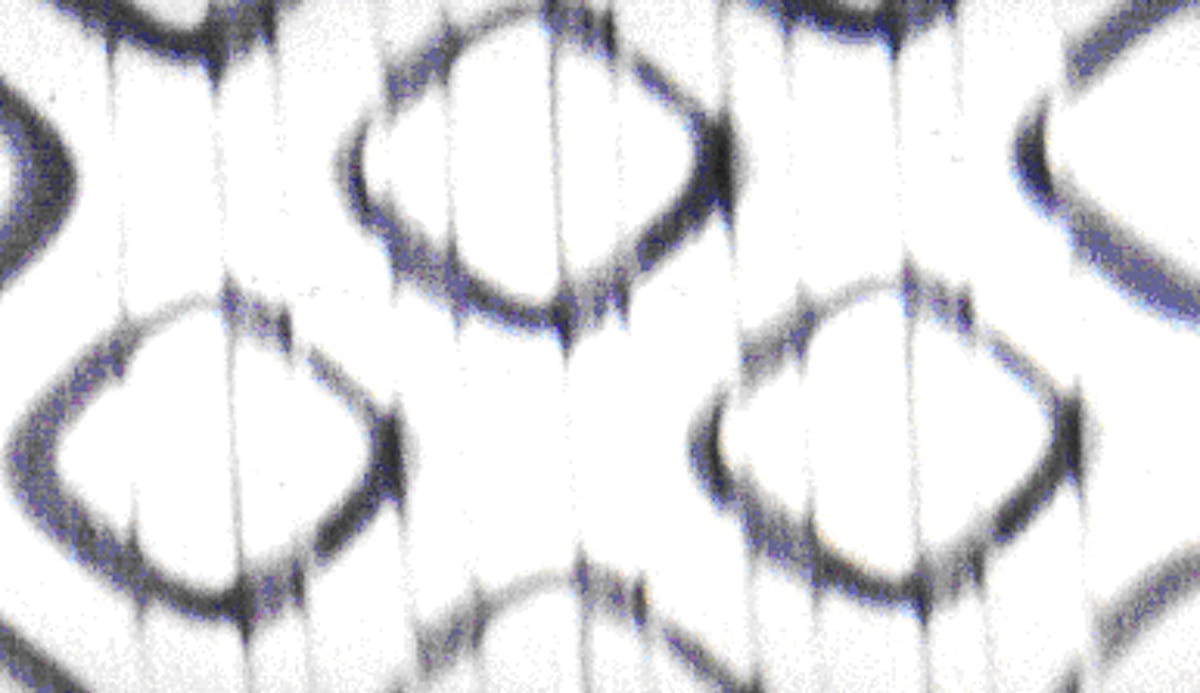 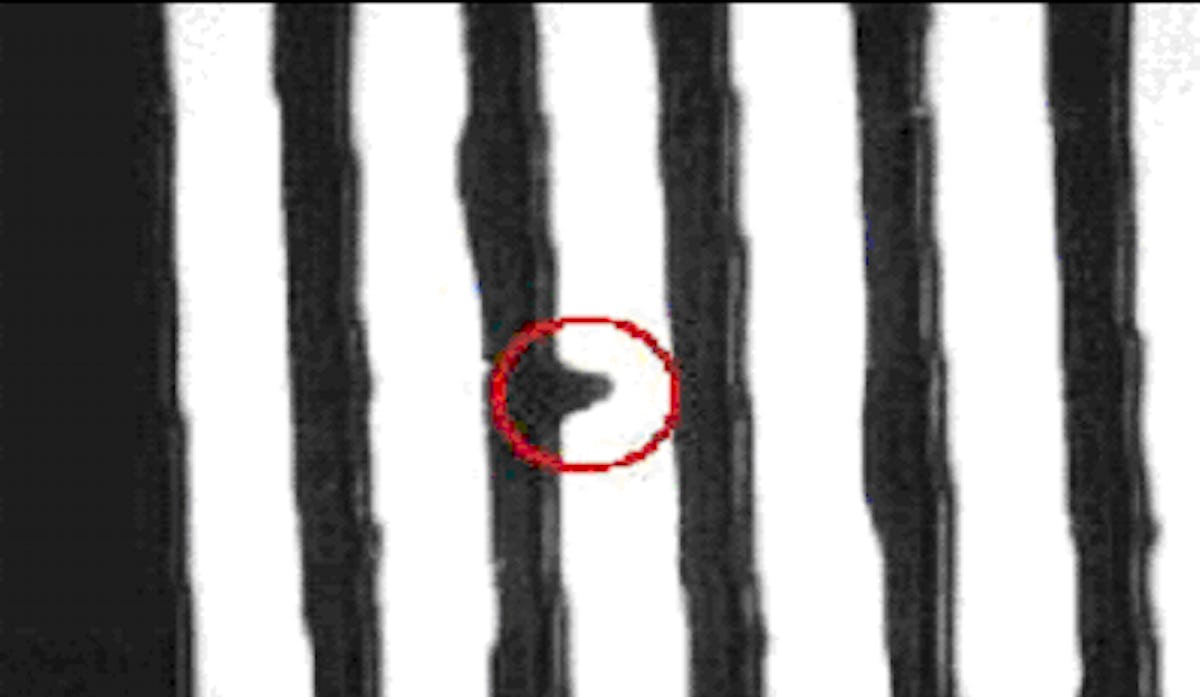 Figures 6a and 6b show the reflected light and fluorescent images respectively, for an etch process drifting out of specification. While the white light image looks perfect, the fluorescent image clearly shows the jagged edges. Continuous monitoring can lead to the early detection and elimination of the problem before part failure occurs. If such problems are not corrected, the process could continue to degrade until shorts as shown in Figures 3a and 3b appear.
Reflected Light Image - Figure 6a 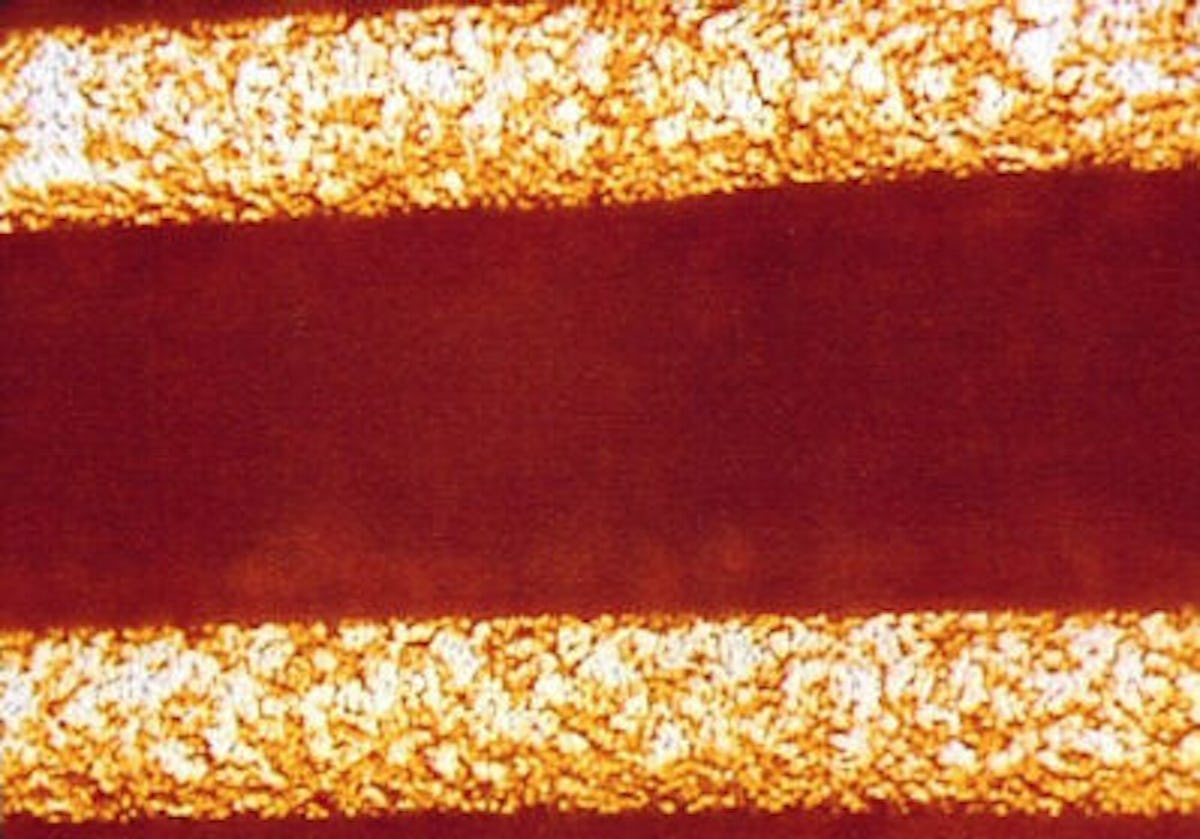 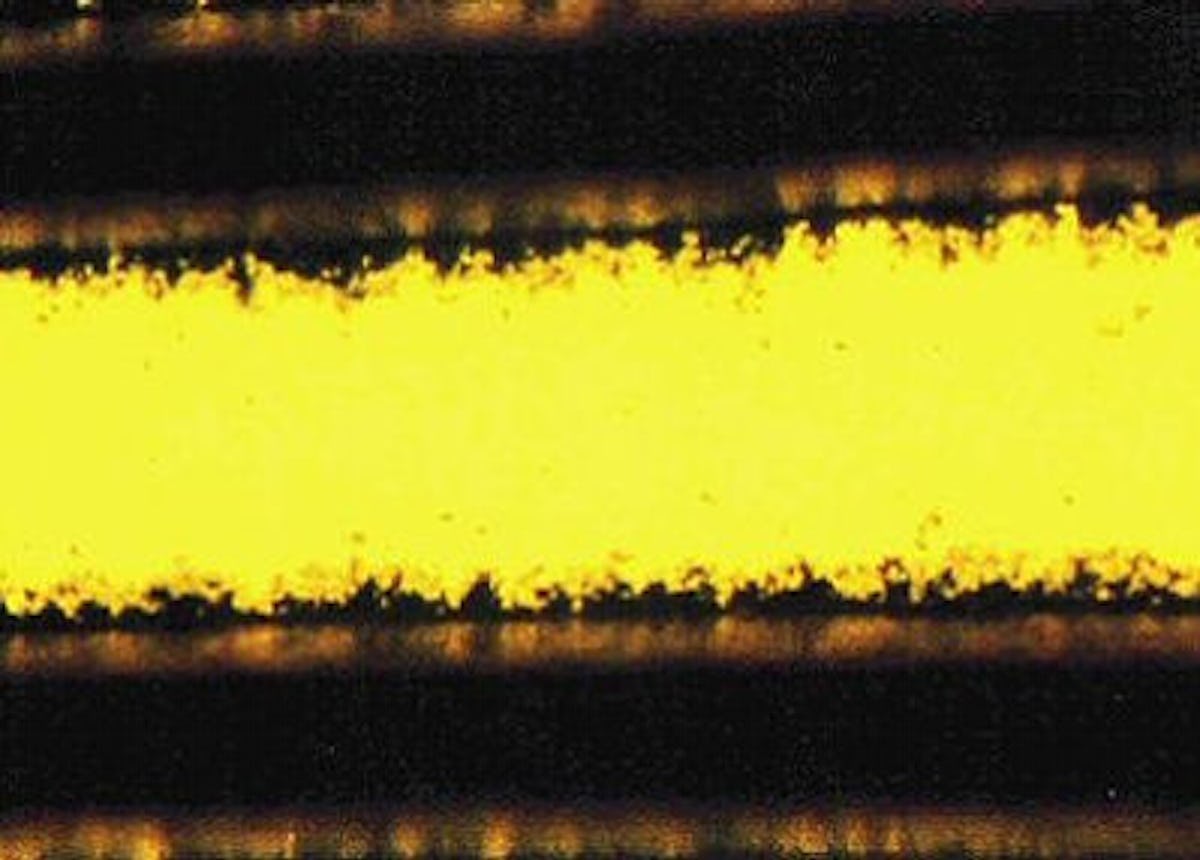 Essential to the inspection system is the ability to maintain focus while scanning non-flat materials. Figure 7 shows a two dimensional topology map of a non-flat substrate with 160 microns between the peaks and valleys. The sample was inspected at 2 micron resolution.
Topology Map of 200mm x 200 mm 3-Dimensional Sample, Inspected at 2 Micron Resolution - Figure 7 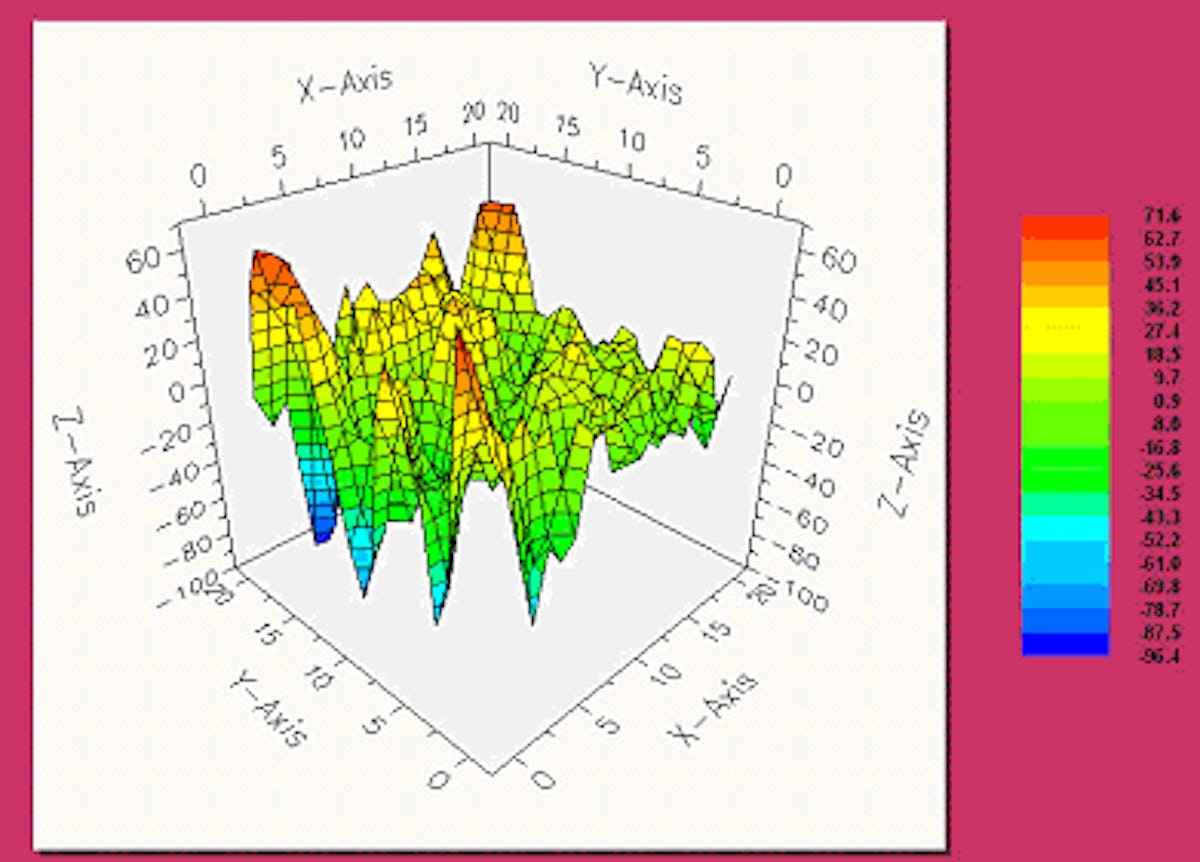 Source: Beltronics
All this at high speed too - For a 300mm x 300mm part with 50 micron lines, scan time on the Beltronics Mscan System (Figure 8) is on the order of 8 seconds. Scan time is a function of inspection area, system resolution and hardware configuration, which can be optimized to meet manufacturing requirements.
Beltronics Mscan Inspection System - Figure 8 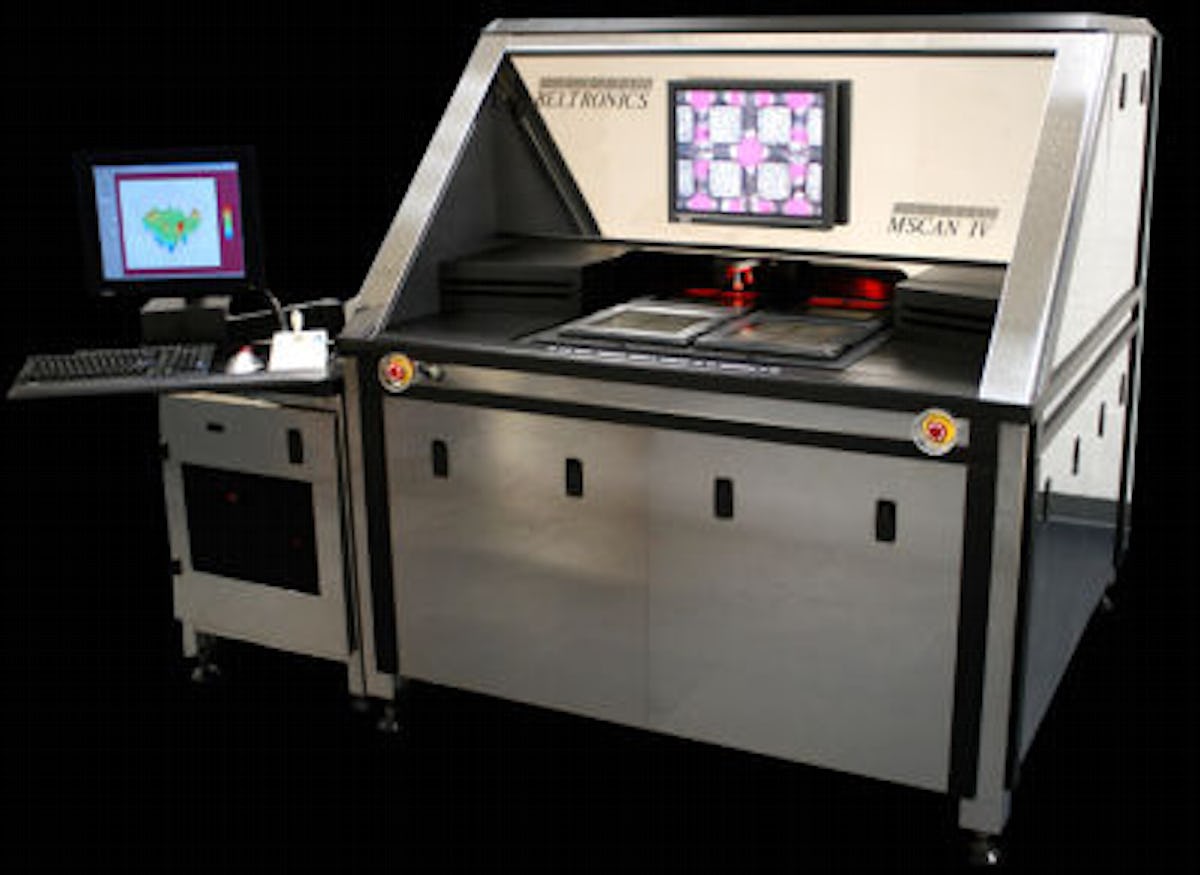 As a world first, Dr. Robert Bishop, President of Beltronics Inc., will be presenting this technology at the IDTechEx Printed Electronics USA 2007 event in San Francisco on November 13-14. www.IDTechEx.com/peUSA.
For more details contact Dr. Bishop at bishop@beltronics.com or Beltronics Incorporated at 617-244-8696.